There are nine layers available for Sea Surface, Seabed Temperature and Salinity Changes: 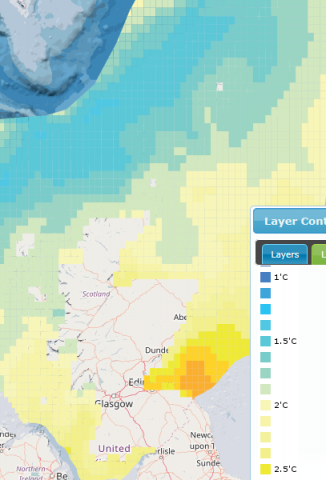 Sea surface temperature -  are projected to be between 2 and 2.5ºC warmer although in summer north and west of Scotland may be only 1ºC warmer. The autumn seems to be when most warming will be evident. At the sea bed, warming is similar as at the surface, but only on the shallow continental shelf. In the deep waters surrounding Scotland, off the shelf, temperatures are projected to change very little. There is quite a lot of both regional and seasonal variation in temperature change.

Surface salinity -  projected to decrease everywhere, and in fact around the entire north east Atlantic, by about 0.2 salinity units. This decrease is mainly due to wide scale changes in the ocean rather than the local effect of rivers. There is very little regional or seasonal variability.