The plankton layers presented show ‘Long-term trends in standard CPR regions of the North Atlantic from 1958-2015’ for:

With additional context layers to show:

CPR analysis of regional patterns for the North Atlantic are made based on CPR Survey standard areas. Only the areas covering Scottish seas are shown. 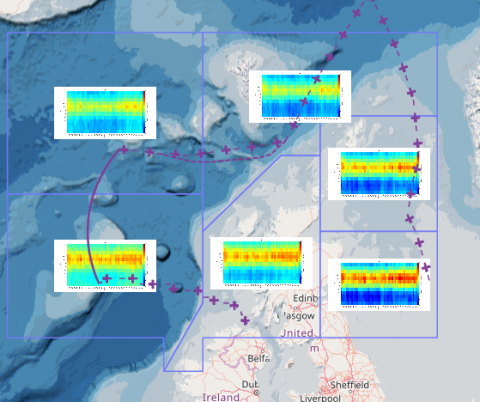 Plankton have a very rapid turnover rate (on a scale of hours/days/weeks) and so in order to obtain an accurate estimate of their abundance and diversity a high frequency time series of data is required. The longest data sets from the CPR are from the east coast region and the Northern Isles. The Scottish Coastal Observatory operated by MSS, Water Framework Directive Monitoring in the Firth of Forth and Clyde and toxin producing phytoplankton monitoring funded by Food Standards Scotland and performed by SAMS also collect data in this region.

Phytoplankton occupy the very base of the food chain, they utilise energy from the sun which is passed up the marine food web when grazed by zooplankton. Phytoplankton growth declines in the winter because it is influenced by increased turbulence in the water column,  the short winter days and lower water temperatures. During spring, as the days lengthen and the waters begin to warm, there is a rapid burst of phytoplankton growth, dominated by small rapidly growing diatoms. This is known as the spring diatom bloom. During the summer months the phytoplankton community can be dominated by dinoflagellates. In some years, but not all, there is a second bloom of diatoms in the autumn. The diatom species dominating this autumn bloom are larger than those found in the spring. The phytoplankton community in Scottish waters is typical of those found in northern latitudes.

Zooplankton populations form complex communities that react to and influence the dynamics and productivity of marine ecosystems. They respond to changes in the availability of food, or in the pressures of predation; and are sensitive to salinity, pressure, temperature, acidity and chemicals, including pollutants.  An increase in sea temperature may also cause changes in the timing of life cycle events. Most planktonic organisms are dependent on temperature to stimulate physiological developments, and the seasonal cycles of some have advanced, possibly in response to warming seas. Studies on multi-decadal time-series have shown that the seasonal peak of Evadne species (water fleas) has moved substantially. Such temporal shifts could have implications for other species in the food web.