In areas where this habitat is undisturbed it is extensively burrowed by several species including the commercially important Norway lobster (Nephrops norvegicus). It also supports a number of characteristic and important species such as the fireworks anemone (Pachycerianthus multiplicatus) and the tall sea pen (Funiculina quadrangularis). This habitat type is concentrated within Scottish waters. Ninety-five percent of UK records of inshore and deep burrowed mud are from the northern North Sea and the sea lochs of western Scotland and the Hebrides and are of international importance.

There are 6 layers, representing a number of important burrowed mud communities and species: 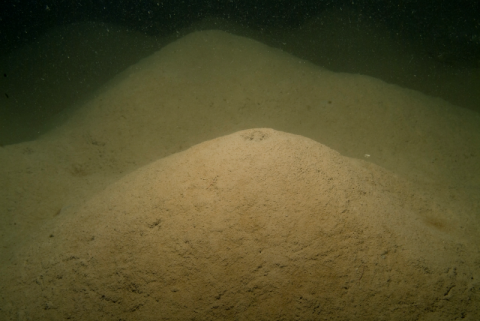 1. Seapens and burrowing megafauna in circalittoral fine mud - Extensively distributed throughout the sea lochs of the west coast, Hebrides and voes of Shetland it occurs at depths of between 10-100m. It supports a diverse burrowing fauna and in particular various seapens in the deeper, sheltered areas. The majority of the UK records are from Scotland.

2. Burrowing megafauna and maxmuelleria lankesteri in circalittoral mud - Found at depths of 10-100m in sheltered and extremely sheltered conditions in sea lochs on the west coast of Scotland and the Outer Hebrides. The great majority of UK records are from Scotland.

3. Tall Sea Pen - Found in deep sheltered waters up to 200m depth it has also been recorded from as shallow as 20m in some sea lochs. In the UK it is almost entirely restricted to western Scotland and the Hebrides; Scottish populations are considered of global importance.

4. Fireworks Anemone - This large burrowing sea anemone lives in a long thick tube buried in mud or muddy sand at depths of 10-130m in very sheltered areas. It is restricted to a number of sea lochs on the west coast of Scotland. It is nationally scarce in the UK, Scottish populations represent 95% of all records and are of international and possibly global importance.

5. Mud burrowing amphipod - Maera loveni, is a mud-dwelling infaunal amphipod, which lives in depths of 20-400 m. It is a northern cold water species that has reached its southern limit in Scotland where it is sparsely distributed around the coast. 95% of British records are from sea lochs and the northern North Sea.