A multi-level coastal typology study was developed in 2016, by joint ESRC and Scottish Government doctoral student Dr Paula Duffy of the Marine and coastal environment team at the University of St Andrews. The study investigated 2011 census data (see also MS Maps NMPi ‘Human Population - Census 2011 /  Mid-2012 Population Density Estimates for Localities in Scotland (NRS)’) to create a socio-economic and demographic profile of characteristics in 2011. A second level of the typology incorporates measures for social composition and change over time in population size, age profile and social variables since the previous census in 2001.

A two-stage cluster analysis of the data (see link in ‘Data Sources’ tab for paper detailing the methodology) was undertaken for coastal localities (defined as within 2 kilometres of the coast) with populations of greater than 1,000 (for reasons of confidentiality). This 1,000 threshold explains why many smaller coastal communities do not feature on the maps.

The study has created 6 maps, hosted on MS Maps NMPi:

Data originators:
University of St Andrews
This information page is part of the theme:
Human Population 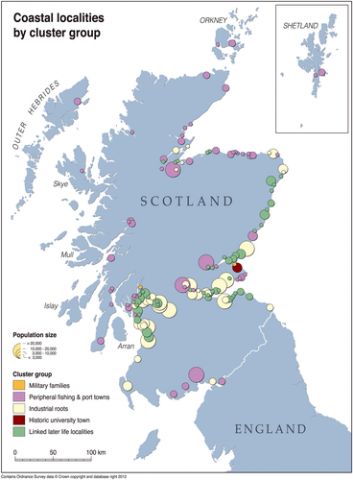 The study builds on and extends work undertaken in England and Wales to inform marine planning (see links in 'Additional Information' tab below).

This multi-level Coastal Localities Typology differentiates between different types of coastal areas on the basis of their census based socio-economic and demographic characteristics. The Level 1 Typology was created using data drawn from 15 variables from demographic Socio-economic health and mobility indicators (e.g. age, household composition, self-rated health, industry, deprivation indicator, distance to work) of the 2011 Scottish Census. The level 2 analysis incorporates 3 variables measuring social diversity (ethnicity, religious affiliation, and country of birth), 5 change variables (Overall population change 2001 -2011,Proportional  population change by Age 2001 -2011, Proportional change in Ethnicity by Ethnic group 2001 -2011, Proportional change in Religious Affiliation by group 2001 -2011, and Proportional change in Country of Birth 2001 - 2011) taken from 2001 and 2011 Scottish Census; and an isolation variable (calculated on time to travel by land, including ferry, to nearest city of over 100,000 people: Aberdeen, Dundee, Edinburgh or Glasgow).  The underlying geography of coastal towns is taken from the Localities 2010 dataset of the National Records for Scotland. The data were created as part of Dr Paula Duffy’s ESRC doctoral studentship hosted by the University of St Andrews and Marine Scotland.

The analysis should inform national and regional marine planning by giving an insight into the patterns of socio-economic and demographic similarities and differences between Scottish coastal towns, providing a 2011 baseline across measures as well as how population structures in these towns have changed across time. As with the work from the England and Wales contexts, this has potential to inform development decisions through awareness of the wider socio-economic circumstances and demographic composition of coastal communities.