There is an ongoing programme of summer, harbour seal moult surveys of the Scottish coast where in addition grey seal presence is recorded, commissioned by Scottish Natural Heritage in collaboration with the Sea Mammal Research Unit at the University of St Andrews.

There are two layers displayed:

Surveys of harbour and grey seals are carried out annually in August.  By surveying a different area each year, over a 5 year period the whole area of interest is surveyed.  The August 2015 survey completed the last round Scotland survey. 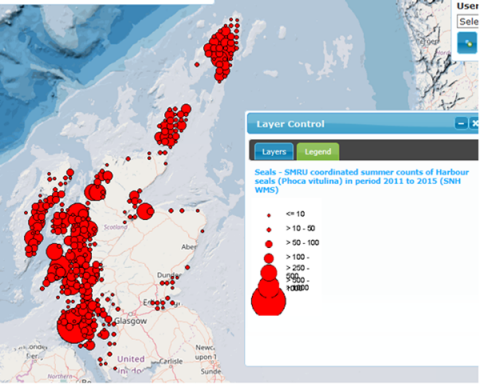 In south-west Scotland, harbour seals have increased in number since they were last counted. In 2014 and 2015, 7,645 seals were recorded, compared with 5,930 seals in 2007 and 2009. This scale of increase has been observed in harbour seal populations all along the west coast of Scotland.

Grey seals were counted at the same time. Their numbers across the survey locations varied hugely, but the figures do show the distribution of grey seals around the coast at this time of the year.  Biannual grey seal pup surveys are also carried out at a small number of key breeding sites in October to December.