Eutrophication occurs when the enrichment of waters by nutrients (nitrogen and phosphorus) causes excessive growth of phytoplankton and macroalgae (collective term used for seaweeds visible to the naked eye) resulting in an undesirable disturbance of the marine ecosystem. Opportunistic macroalgal species are a natural component of intertidal ecosystems, but where excess nutrients occur they are able to out-compete other seaweed species. They may produce blooms, forming mats on the mud surface that have harmful effects on the environment. Some of the main effects are smothering of sediment dwelling animals, formation of anoxic (reduced dissolved oxygen) sediments (Norkko, Bonsdorff, & Norkko, 2000), and sulphide poisoning of the infaunal (animals living in the sediments) species (Gamenick, Jahn, Vopel, & Giere, 1996). Eutrophication issues in Scottish waters are limited. However, in some smaller estuaries such as the Ythan, where nutrients are often elevated, excessive opportunistic algal mat growth and their associated effects have been observed.

The extent of algal mat growth is monitored by the Scottish Environment Protection Agency (SEPA) in three small estuaries on the east coast; the Ythan estuary in the north east (presented here), Montrose basin in the South Esk estuary and the Eden estuary in Fife. SEPA use this information to make assessments of eutrophication for the Water Framework Directive (WFD), Urban Waste Water Treatment Directive (UWWTD), Habitats Directive, Nitrates Directive and OSPAR monitoring.

The Ythan is a small (11 km) estuary north of Aberdeen (in the North East Scottish Marine Region) with a predominantly agricultural catchment and a small population (<10,000). Sources of excess nutrients entering the estuary are sewage point sources and agricultural run-off, such as nitrogen fertiliser. Concerns that the algal mats were extending as a consequence of agricultural run-off into the Ythan river led to the designation of the Ythan catchment  as eutrophic and a Nitrate Vulnerable Zone (NVZ). In 2000, under the WFD, excessive growth of opportunistic macroalgae in estuaries is assessed by the coverage and density (as measured by average wet weight and average percent cover) (Figure 1) of the algal mats (WFD-UKTAG, 2014). The measurements are then compared with those from previous years' assessments. This is expressed as a number from 1 to 0, called the Ecological Quality Ratio (EQR), which is grouped into five classification bands from High to Bad. EQR values close to one indicate macroalage communities closer to their natural state with no macroalgal blooms (MAB), those near to zero indicate an increase in MAB compared with previous years. 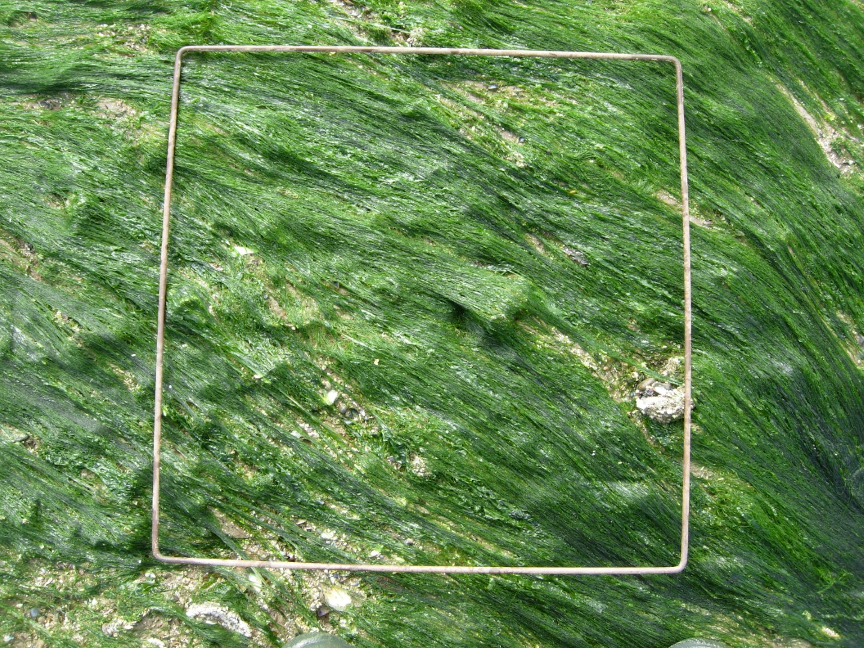 Sampling is carried out during the summer months, when MAB are at their peak. The area covered by each survey is between mean high water and mean low water on a spring tide. Global Positioning System (GPS) units are used in the field to estimate and map the extent of algal mat cover. In addition, randomly placed 0.25 m2 quadrats are used to assess percentage cover of algae biomass (g/m2) and entrainment (algae growing within the sediment) is recorded when present. Opportunistic algae within quadrats are collected and taken back to the laboratory for washing and biomass estimation.

The latest assessment (2019) of dissolved inorganic nitrogen concentrations in the estuary, as part of the WFD, classifies the estuary as Bad (using standards outlined in the Scottish River Basin Directions 2014) suggesting the estuary is still nutrient enriched. However, other factors such as warm temperatures need to be present for excessive algal growth to occur.

SEPA has carried out MAB surveys in the Ythan estuary using the WFD sampling method since 2008. The result of the 2019 MAB classification is 0.797: Good. This is a slight increase on the previous survey's classification results (Figure 2) but remains within Good status. This equates to a rolling mean, using the last 5 survey results, of 0.704. 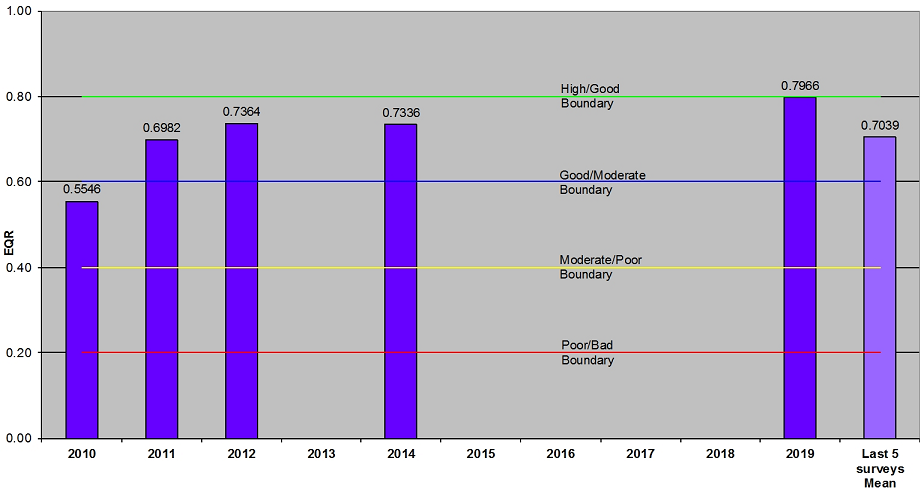 Since 2009, the EQR of MAB in the Ythan estuary has gradually improved from Moderate to Good. This classification for MAB is acceptable under WFD guidelines but does not mean that the estuary is no longer eutrophic.

Under the WFD, estuaries are only required to be assessed for macroalgae every 6 years. As levels in the Ythan were improving from 2010 - 2012 a decision was made in 2013 to reduce the frequency of assessment. This decision was supported by an assessment of Good status in 2014.

Despite the general improvement in status since 2010, the 2019 survey of the Ythan Estuary found that the total area covered with MAB species has increased, since 2011, from 11 hectares to 24 hectares (the average total area cover between 2008 - 2010 was 37.16 ha) (Figure 3). Although algal extent has increased during the period, the density (as measured by average wet weight and the average percent cover) has decreased: from 495 g per square metre to 205 g per square metre and 68.36% cover to 49.34% cover respectively. This indicates that the extent of MAB from GPS measurements in the Ythan Estuary is increasing but it has not reached the weight or % cover that has been observed in previous years from quadrat analysis. 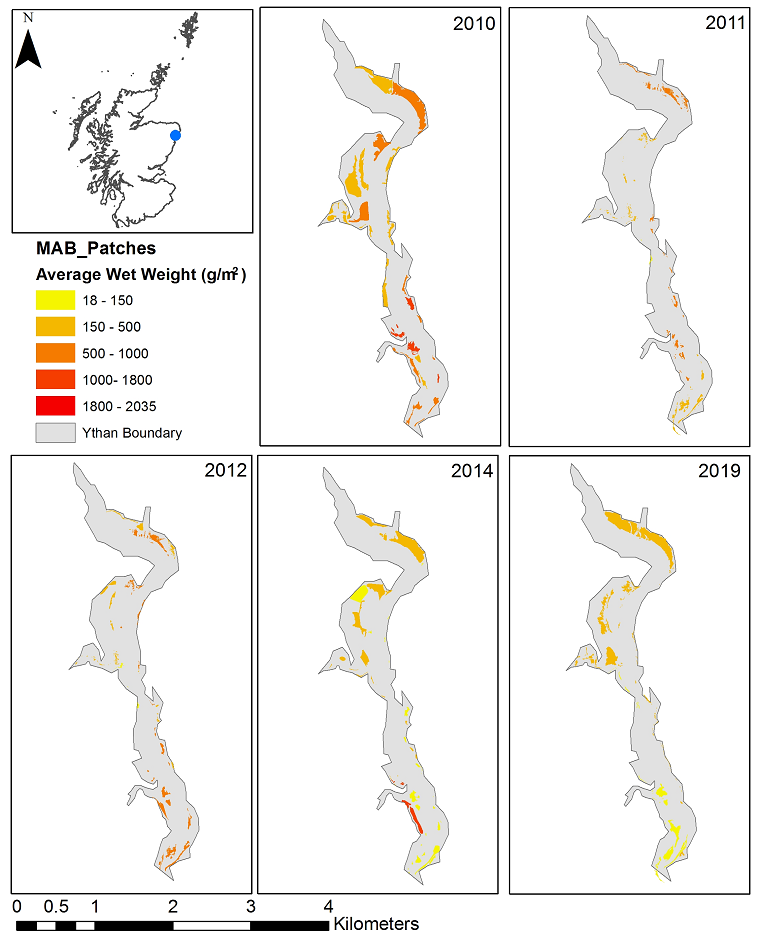 Figure 3: Location of the Ythan estuary and MAB coverage between 2010 and 2019 indicating the average wet weight of macroalgae in grams per square metre.

In addition to the NVZ designation, the estuary was also designated a Sensitive Area (eutrophic) under the EU Urban Waste Water Treatment Directive (UWWTD) in 2000 and has been identified as a ‘Problem Area’ under the Oslo and Paris (OSPAR) Convention.

The Ythan LIFE Project was set up in 2001 and ran until 2005, aimed to involve local people in protecting, restoring and enhancing the Ythan catchment. The project made considerable strides in raising awareness of diffused pollution issues, helping improve farming practises and carrying out river restoration work.

The lower part of the River Ythan which feeds into the Ythan estuary contained high levels of phosphate and was also designated as a Sensitive Area (eutrophic) under the UWWTD in 2006.

Currently, Scottish Water are carrying out a significant upgrade to the sewage treatment works at Ellon to be completed in Spring 2021.  These designations and projects work to address water quality and habitat issues in the Ythan estuary but any results may take several years to be seen.

SEPA will continue to monitor MAB levels in the Ythan in addition to the Montrose Basin and Eden estuaries to determine if efforts to reduce nutrient levels in the catchments upstream have reduced eutrophication.