Polychlorinated biphenyls (PCBs) are a group of man-made industrial chemicals which were used mainly in electrical equipment. PCBs are persistent chemicals because they contain chemical bonds that are not found in nature, and take a lot of energy to split apart. This means they cannot easily be broken down by routes normally used to dispose of waste such as light, UV, heat or by the action of microbes. PCBs accumulate in living tissue and magnify through the food chain. They are also toxic and due to concerns about their environmental impact they were banned in many countries in the mid-1980s, with their disposal closely regulated. However, PCBs can still enter the marine environment following the destruction and disposal of industrial plants and equipment or from emissions from construction materials and old electrical equipment (for example from landfill sites). PCBs can also accumulate in shellfish and fish, where they are taken in either directly from the marine environment or indirectly through food consumption. Highest concentrations will be found in marine mammals, as concentrations will increase through the food web.

PCBs are routinely monitored in fish and shellfish for the Clean Seas Environmental Monitoring Programme (CSEMP) but are not routinely monitored in grey seals from Scottish waters because they are not part of the Defra and Cefas monitoring programme that assesses persistent organic pollutants (POPs) in stranded cetaceans. Throughout the UK, enough cetaceans (whales and dolphins), particularly harbour porpoise, strand annually for samples to be collected that provide detail on the differences in POPs over time, with age, between sexes and throughout different regions of the UK in these top predators. The stranded cetacean samples are more straightforward to collect and representative of UK wide POP levels than samples from live, wild seals. The research run by the Sea Mammal Research Unit (SMRU) (at the University of St Andrews) to investigate long-term breeding success in grey seals is not a monitoring programme but focusses on adult females and pups, and only in specific locations. This means it would not provide a large enough temporal and spatial scale, and is not representative of all ages and both sexes, to give sufficient scope and detail for a regular UK-wide assessment. 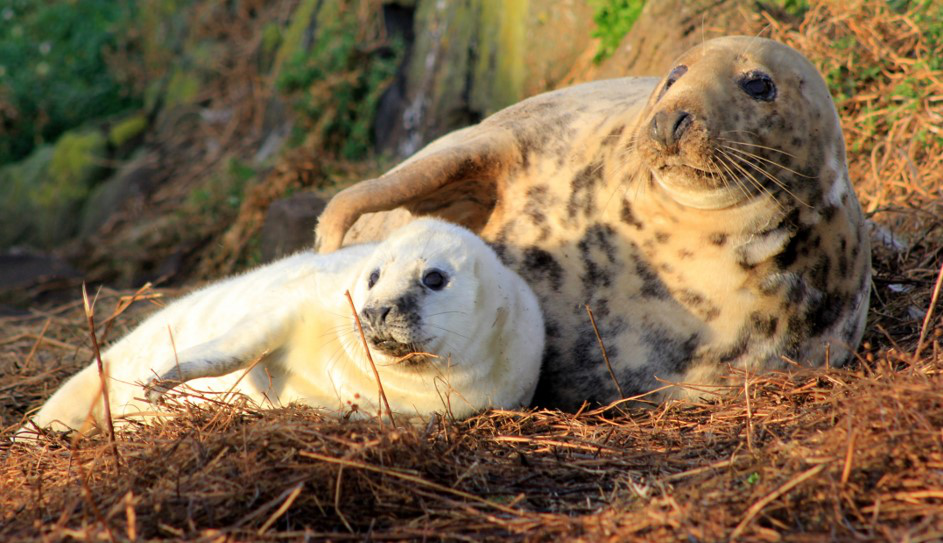 Figure 1: Mother and grey seal pup on the Isle of May. © SMRU.

In 2015 - 2017, researchers at Abertay University, in collaboration with SMRU were funded by the Natural Environment Research Council to measure POPs, including PCBs, and explore their effects on the way grey seal pups gain fat when suckling and lose it when fasting. This project made use of the SMRU long-term research programme that tracks the breeding success of grey seals on the Isle of May in the Firth of Forth.

PCBs were measured in the blubber of grey seal pups sampled during the suckling period, when they are reliant on milk from the mother, and their post-weaning fast, which they undertake for 10-40 days once the mother leaves them to feed at sea, during October – December in 2015 - 2017. Pups accumulate POPs, such as PCBs, from milk which concentrates in their fat as they fast after weaning. PCBs were measured in blubber biopsies, by the Centre for Analytical Research and Technology (CART) at the University of Liège, Belgium.

Total PCB (sum of seven compounds) concentrations in all pups ranged from 0.155 to 2.22 μg g-1 lipid weight and were well below the marine mammal toxicity threshold defined by Kannan, Blankenship, Jones & Giesy (2000). The toxicity threshold is an estimate of the minimum concentration that lowers vitamin A or thyroid hormone levels, or reduces the ability of immune cells to divide and respond to disease (Kannan, Blankenship, Jones & Giesy, 2000). This definition of toxicity does not capture the more subtle ways in which POPs can have negative health effects.

Concentrations in 2015 - 2017 were around 10 times lower than in grey seal pups during the late 1990s – early 2000s in the heavily polluted Baltic Sea (Sørmo, Skaare, Jussi, Jussi & Jenssen, 2003), and 20 - 150 times lower than in North Sea harbour seals in 2006 - 2008 (Weijs et al., 2009b). Concentrations for the most toxic PCB compound were less than half of those seen in the late 1990s in pups from the Baltic Sea, East and West Atlantic (Sørmo et al., 2003). The relative abundance of each of the PCB compounds is similar to previous studies on North Sea grey seals (Vanden Berghe et al., 2012; Debier et al., 2003) and in phocid seals from other regions (Ross et al., 2013; Shaw, Brenner, Bourakovsky, Mahaffey & Perkins, 2005; Weijs et al., 2009a). Although seals breed in the Forth, they typically forage further out to sea, therefore the PCB concentrations observed are representative of the wider North Sea rather than of the immediate local area. The low PCB levels in 2015 - 2017 pups compared to other species, areas and earlier data, suggest that adult female seals in the North Sea are eating fish with lower PCB levels than in previous decades, and that they do not forage in areas that have high levels of contamination from either a localised point source or run off. This means the levels they pass on to their pups are lower. However, adult males and juveniles, which have longer to accumulate PCBs and cannot get rid of them by passing them onto offspring, will have higher levels than the concentrations seen in the pups. This makes it difficult to compare between different species and age classes.

Trends from 2015 to 2017 could not be assessed reliably because there are only 3 years of data in this time series and only up to 30 animals in each year. However, a comparison of the combined 3 years’ of data with equivalent data collected in 2002 showed that by 2017 the total PCB concentrations had fallen to 75% of the concentrations seen in the early 2000s (Robinson et al., 2019). These changes were a result of  the most abundant PCB compounds showing the largest decreases (>20%). Some of the least abundant compounds showed no change or an increase since 2002.

Recent evidence suggests PCBs and other POPs can disrupt the way body fat stores are regulated in all kinds of animals at different levels of the food chain (Grün & Blumberg, 2009; Yadetie, Karlsen, Eide, Hogstrand & Goksøyr, 2014; Yadetie et al., 2017). A laboratory method was developed to measure the metabolic properties of blubber (Bennett et al., 2017) and used to investigate if PCBs alter the way blubber works in wild North Sea grey seal pups (Robinson et al., 2018).  The data showed that the most toxic PCBs reduced glucose uptake in blubber. Glucose uptake by blubber is an important contributor to mass gain rate in suckling pups (publication in preparation). By slowing down glucose uptake, PCBs may limit weaning mass in grey seal pups, which could have population consequences because weaning mass is positively related to first year survival in grey seal pups (Hall & Richard, 2001; Hall, McConnell & Barker, 2002).

Plasma thyroid hormone (TH) levels were measured in seal pups because previous studies have shown that TH are reduced by PCBs and other POPs (Sørmo et al., 2005). The most active of the TH (T3), showed a reduction of about 30% at current PCB concentrations experienced by grey seal pups (data not yet published). The consequences of reduced TH for grey seal pups are not well defined, but these hormones are important regulators of metabolism and development in other animals (Yen, 2001). Laboratory experiments suggest that current PCB concentrations could alter the way blubber fat tissue responds to TH, which means PCBs can alter not only TH levels but also tissue sensitivity to them. 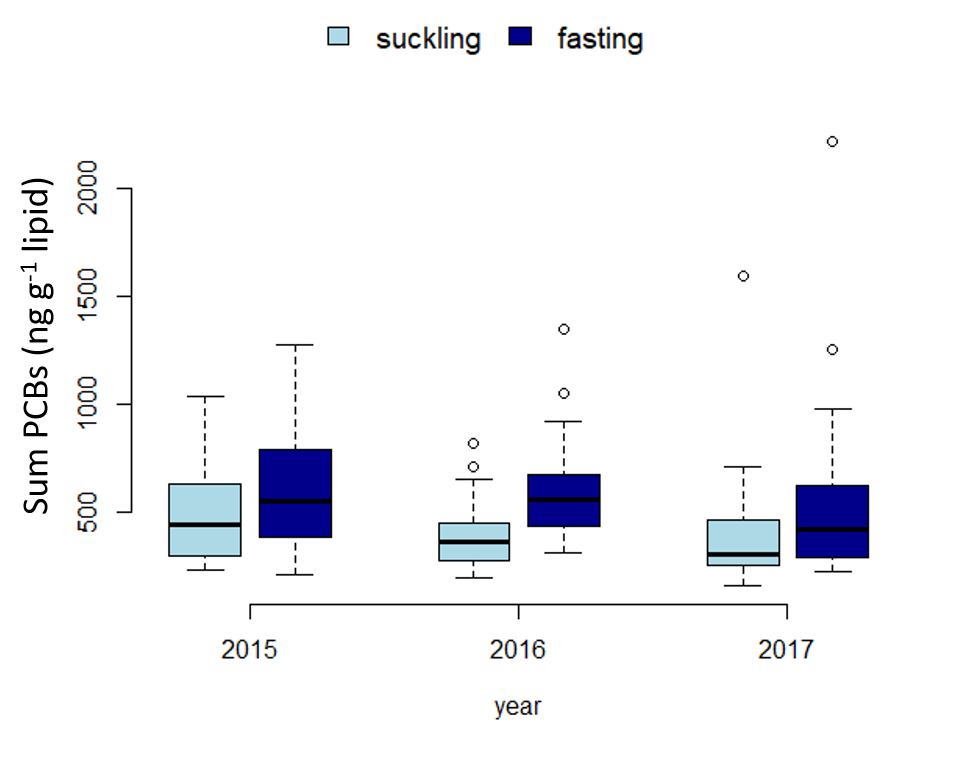 Figure 2: Median (black band) and interquartile range (box) of sum PCB measured in blubber tissue of grey seal pups from the Isle of May sampled during October to December 2015 - 2017 when they were suckling (light blue) and again when they were fasting (dark blue). Whiskers represent 1.5 times the interquartile range, and points show outliers. Note: 2015 values do not include PCB118.

PCBs continue to exert biological effects on grey seals at concentrations experienced in the wild, even though they are 7 - 113 times below what are normally considered to be marine mammal toxicity thresholds. As more about the biological effects of PCBs and the mechanisms through which they work is understood, particularly in relation to body fat store regulation, it may be advisable to revise these toxicity thresholds and/ or include additional metrics in the toxicity assessment.