Eutrophication in the marine environment is the excessive growth of phytoplankton in response to enrichment by nutrients (nitrogen (N) and phosphorus (P)) resulting in an undesirable disturbance in the marine ecosystem. In some instances this can result in the formation of very high cell density algal blooms, which can impact the marine ecosystem by influencing the diversity and abundance of flora and fauna in the water column, increasing water turbidity, depleting oxygen and altering the behaviour of large fauna.

Chlorophyll-a can be used as an indirect means of measuring algal blooms and can be used as an indicator of anthropogenic nutrient enrichment. However this relationship is complicated by other influencing variables such as turbidity, phytoplankton community composition, temperature, grazing and transport processes.

Climate change and ocean acidification can also influence the development of phytoplankton communities via a variety of different mechanisms, e.g. changes to stratification, mixing and ocean currents with effects on availability of nutrients and other minerals, the time of year in which phytoplankton can start growing, the duration of the growing season and interactions with grazers. In general, chlorophyll-a concentrations tend to be greater in coastal areas where levels of anthropogenic/terrestrial nutrient enrichment are also greater.

Nitrogen and phosphorus can enter the sea from a number of natural and anthropogenic sources: direct discharges (e.g. sewage, aquaculture etc.), inputs from rivers, land runoff and atmospheric deposition.

This indicator assesses the levels and trends of chlorophyll-a in each of the eleven Scottish Marine Regions (SMRs) as an indicator of direct eutrophication effects.

Weekly chlorophyll monitoring is performed by Marine Scotland Science (MSS) at two monitoring locations: Stonehaven, in the North East SMR, and Loch Ewe, in the West Highlands SMR. The Scottish Environment Protection Agency (SEPA) maintains regular surveys in the Firth of Clyde and Firth of Forth. Other ad-hoc data collection may be ongoing at universities and institutes with a marine focus, though these are not centrally recorded.

Chlorophyll-a concentrations are determined using extractive methods and excitation by a fluorometer. For the purposes of clarity within this assessment the term chlorophyll-a has been used, but due to the nature of the fluorometric technique this will include interfering chlorophylls as described in paragraph 3. Some of the chlorophyll data used in this assessment is from field based analogues using multi-parameter sondes. Internal Analytical Quality Control (AQC) for monitoring laboratories involves running a blank sample with each batch of samples, then a solid standard supplied by the fluorometer manufacturer, followed by an instrument performance standard (IPS). SEPA and MSS participate in QUASIMEME (QUASIMEME, 2019) performance studies for the analysis of chlorophyll-a. SEPA and MSS are accredited to ISO17025 for the analysis of chlorophyll-a.

Datasets used for this assessment include those available between January 1990 and December 2018 on the International Council for the Exploration of the Seas (ICES) ICES Oceanographic data portal for the coastal Scottish Marine Regions (SMRs), as well as additional datasets from SEPA and MSS that are not yet uploaded to ICES.

Historically chlorophyll-a data was corrected for interferences from magnesium free chlorophyll derivatives (phaeophytins and phaeophorbides, collectively known as phaeopigments). However, this method is no longer recommended by the OSPAR Joint Assessment and Monitoring Programme (JAMP).  Datasets contain both pheophytin corrected and uncorrected chlorophyll-a concentrations, which may result in overestimation of chlorophyll- a.

Status assessment was against the OSPAR chlorophyll-a concentration criteria of 10 µg L-1 for offshore areas and 15 µg L-1 for coastal areas.

Trend assessment depends on expert judgement to determine if confidence in trends are high or not. Factors that could reduce confidence include datasets with high variability in sampling effort between years, and time series with missing values for several adjacent years. Trans-boundary effects are not taken into account. Analysis was carried out in R using the ‘Kendall’ and ‘mblm’ packages.

Due to insufficient sampling in various areas, trends could only be presented for some of the SMRs. This is noted in figure legends.

Chlorophyll-a concentrations measured in samples from the 11 coastal Scottish Marine Regions (SMRs), collected during the phytoplankton growing season (March- September) between 1990 and 2018, were compared against OSPAR assessment criteria. Trend analysis was carried out to determine if concentrations were increasing or decreasing.

The 90th percentile chlorophyll-a concentrations in the Clyde and Forth and Tay exceeded the OSPAR criteria of 15 µg L-1 for coastal regions or 10 µg L-1 for offshore regions, in some years (Figure 1). Median chlorophyll-a concentrations were also the highest in these regions. There was a statistically significant increasing trend of 0.21 µg L-1 y-1 in the Forth and Tay, but no statistically significant trend in the Clyde (Figures 1 and 2).

No other SMR had a 90th percentile chlorophyll concentration above OSPAR criteria. No trend could be detected for North East, Orkney Islands, Shetland Isles or West Highlands. Data were insufficient to attempt to detect a trend for Argyll, Moray Firth, North Coast, Outer Hebrides and Solway (Figure 1 and 2). There will also be low confidence that the 90th percentile chlorophyll-a concentration in these data poor regions are below the assessment criteria. 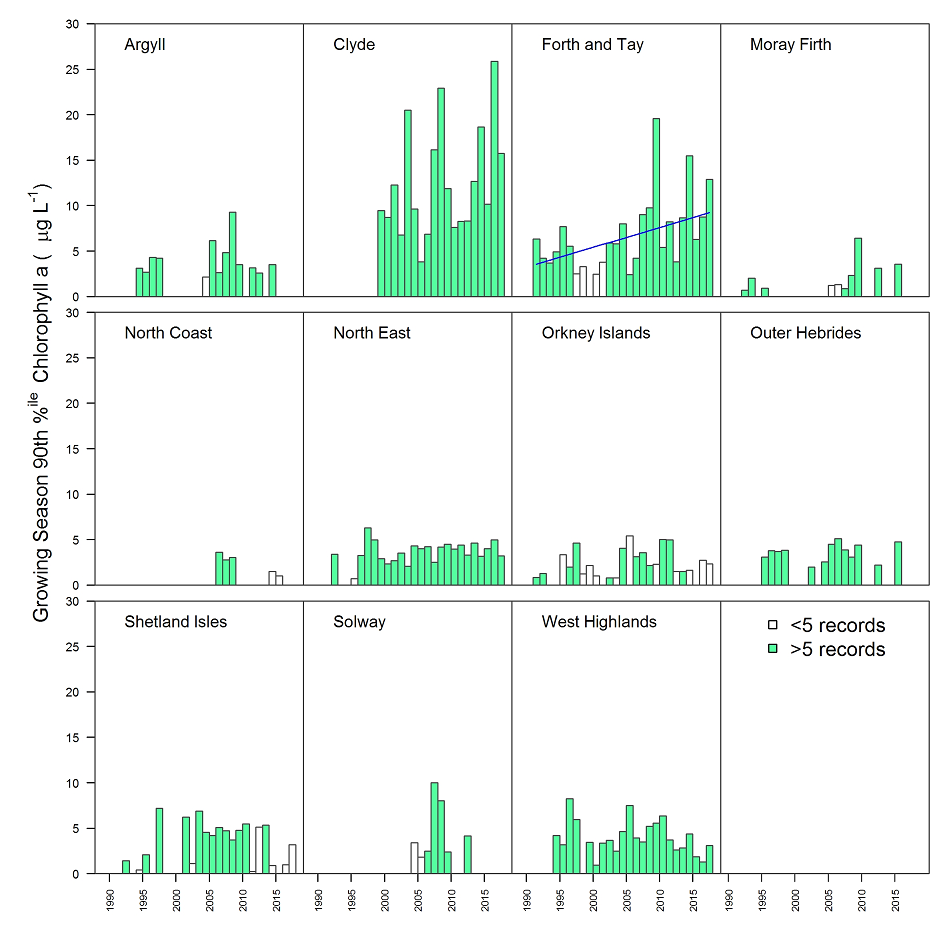 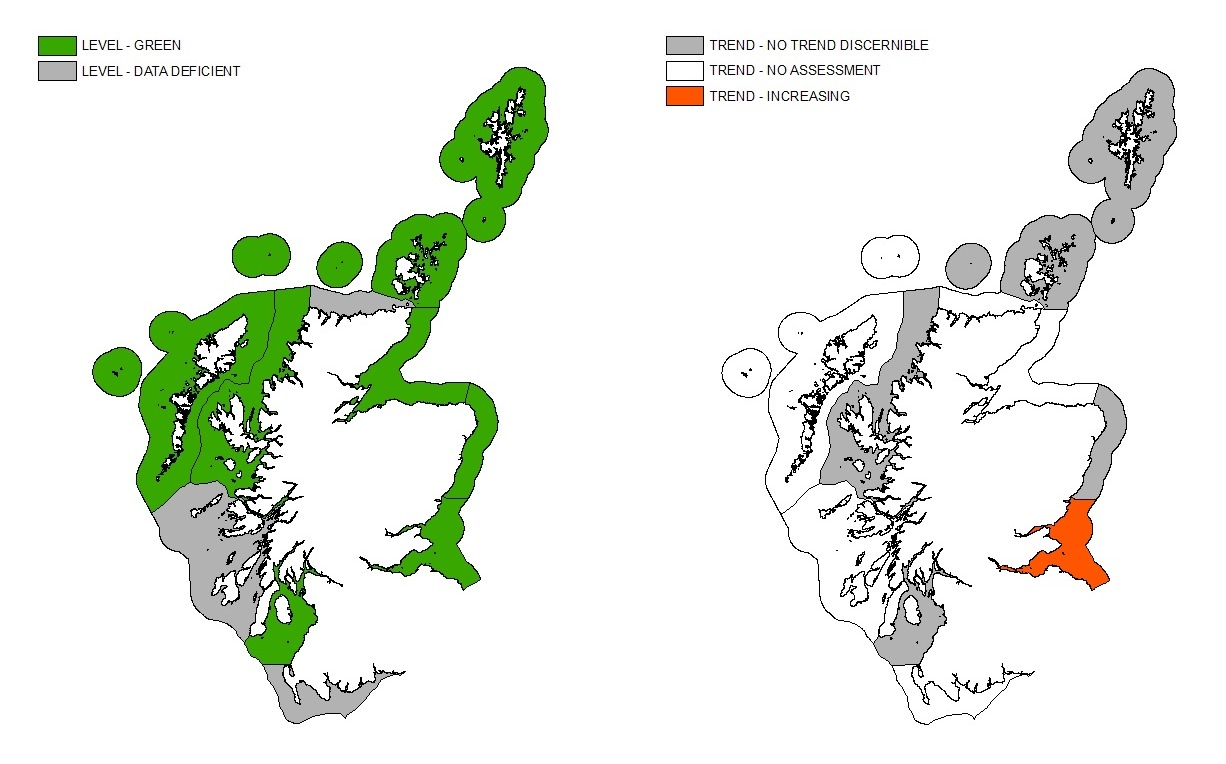 Figure 2: Location of SMRs with chlorophyll-a and trend assessments overlaid.

SMRs coloured green have sufficient data for a trend assessment. The map on the right shows if trends were observed, the red colour indicates an increasing trend, while SMRs coloured grey show no trend.

Scotland’s Marine Atlas (Baxter et al., 2011) presented only a snapshot data set covering June to August 2008, requiring an alternative way to identify trends. Where data are sufficient and Mann Kendall tests indicate a statistically significant trend was present, a Theil-Sen slope & intercept has been modelled, and a trend line (blue solid) (Figure 1) has been fitted to data.

Confidences that the relevant criteria for each area has not been exceeded are summarised in Table b.

The Clyde, from 1999 to 2011, had no statistically significant trend (Mann Kendall tau = 0.09, p = 0.73; based on only 11 years of data, as 1990-1999 had no data). Extending the dataset to 2018 also resulted in no detection of a statistically significant trend (Mann-Kendall tau = 0.26, p = 0.12). The Clyde is mostly below the coastal OSPAR criteria, however there is only a 0.2% confidence that 90% of observations would be below this criteria. Weak tidal currents and large volumes of fresh water cause near permanent stratification in the Firth of Clyde, which provides the conditions for algal growth. Nutrient input from the Glasgow metropolitan area, as well as agricultural and forestry land, stimulates algal blooms to a greater degree than water bodies that are subject to more frequent mixing.

All other regions had no 90th percentile concentrations above OSPAR criteria for 1990-2011 or 1990-2018, and no statistically significant trends. Five SMRs had data for less than half the years between 1990 and 2018 (Argyll, Moray Firth, North Coast, Outer Hebrides, Solway) with correspondingly lower confidence that the criteria would be met 90% of the time.

Marine planning should pay special attention to areas where there is a statistically significant trend identified, or where criteria breaches have occurred. While most regions have no concentrations greater than the criteria at the annual 90th percentile level of aggregation, there are occasional exceedances of these criteria in the Clyde and Forth and Tay.

Sampling effort for every area was variable both spatially and temporally, which means confidence in status and trends varies, and that a ‘Scotland wide’ assessment is not presented.

No continuous dataset (from 1990 to 2018) exists for any of the SMR regions in this assessment and the sampling effort is uneven across available data, both spatially and temporally. Datasets contain both chlorophyll-a concentrations corrected for and uncorrected for pheophytin-a, as agreed reporting of chlorophyll-a data has changed (OSPAR, 2012).

Where extensive sampling cannot be justified on a risk basis (such as offshore areas), effort should be made to integrate other sampling options, such as satellite and proxy measures of chlorophyll-a.

Sampling for chlorophyll-a in offshore regions is limited although MSS plan to increase summer monitoring. Effort is needed to incorporate data from remote sensing devices such as satellites e.g. MERIS Ocean Colour (Xiao et al., 2018) and Continuous Plankton Recorder phytoplankton colour index (Raitsos et al., 2012). Recent work by the JMP EUOSAT project (JMP EUNOSAT, 2019) considered such tools and the work of the project is now being considered by OSPAR. However to meet eutrophication criteria any pigment data should be interpreted in the context of the nutrient data.

Current guidelines do not recommend a single standard extraction or analysis technique for the determination of chlorophyll-a for eutrophication monitoring (OSPAR, 2012) and therefore assessments will include data from a range of techniques. In addition reporting of chlorophyll-a corrected for pheophytin-a pigments is no longer recommended by OSPAR. However, historical datasets may contain only corrected chlorophyll-a concentrations. Therefore both corrected and uncorrected data have been used in this assessment. Other assessments such as those done for OSPAR and MSFD are likely to have the same issues.

The dataset in general is uneven across space and time and requires a centralised curated layer on MS Maps NMPi as opposed to assembling as comprehensive a dataset as possible from different sources. For remote regions, satellite and continuous plankton recorder phytoplankton colour index data could be integrated into one dataset.