Concentration of contaminants in the water column

Concentrations of contaminants monitored in water, such as metals, pesticides and industrial chemicals, are below levels deemed to impact on the aquatic environment in almost all Scottish Marine Regions (SMRs). Only concentrations of chromium VI in the inner Clyde Estuary failed to meet the environmental quality standard (EQS). 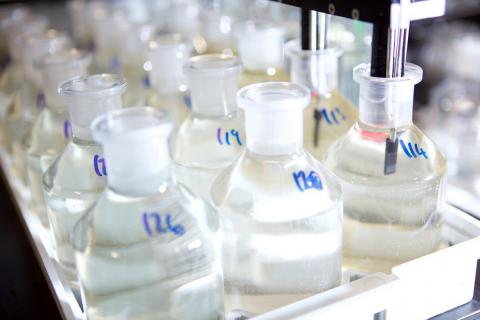 The UK has also identified EQS for other Specific Pollutants (substances discharged in significant quantities). Concentrations of specific pollutants in the environment are compared to the EQS and reported as part of overall ecological status.

This assessment evaluates concentrations of contaminants in each of the Scottish Marine Regions (SMRs) within the context of EQS values set out by the Scotland River Basin District (Standards) Directions 2014.

Given the recent reduction in WFD monitoring in Scotland there are insufficient data to assess temporal trends at the Scottish Marine Region (SMR) scale. Therefore results of WFD chemical classification are presented from 2007 - 2017.

Within the WFD, the assessment of chemical and ecological status for contaminants can influence the overall status for a water body. Generally, where a water column EQS is exceeded for one of the priority substances or specific pollutants this will lead to a less than good status classification.

Measures are put in place as part of River Basin Management Planning (RBMP) to limit the release of contaminants to the water environment from point and diffuse (e.g. runoff from agricultural land) sources. Depending on the substance, marketing and usage restrictions are also used to limit releases of priority substances to the water environment (e.g. plant protection products under European legislation 1107/2009).

The Scottish Environment Protection Agency (SEPA) is responsible for licensing discharges to the water environment, both freshwater and directly to transitional (bodies of water in the vicinity of river mouths that are saline in character) and coastal waters out to 3 nautical miles. SEPA monitors concentrations of contaminants in the water environment where they are considered to be an environmental pressure and compares the data to the EQS to determine the water quality status of the water body.

Transitional and coastal water monitoring is undertaken by SEPA and has been designed to target areas where there are known pressures which may be releasing hazardous substances. Broadly, following more extensive monitoring at the start of the WFD process, monitoring is centred around the Forth and Clyde estuaries in the central belt where there are pressures relating to industrial activities. In these water bodies samples are collected monthly. SEPA data were used in this assessment, SEPAs laboratories comply with ISO 17025, are accredited by UKAS and participate in the QUASIMEME proficiency testing scheme. The monitoring network is continually reviewed. In recent years, the low concentrations measured, below the EQS and in many cases below the limit of detection, have led to a reduction in the water column monitoring. In addition, some priority substances have EQS set in biota (fish or shellfish) and therefore monitoring in the water column is no longer used.

These data are used to classify chemical status according to EQS set out by the Scotland River Basin District (Standards) Directions 2014. These standards are set out in SEPA guidance WAT-SG-53 (SEPA, 2018).

EQS are based on Annual Averages (AA), i.e. the mean concentration from samples taken over a year. Some substances also have Maximum Allowable Concentrations (MAC), which allow assessment of short-term, acute exposure.

In total, 504 transitional and coastal waterbodies are classified for specific and priority substances in Scotland. This is often based on knowledge of emissions of these contaminants to transitional and coastal waters. Water quality monitoring will only take place where there are known emissions to the water body. In some cases, an assessment will have been made on past data sets, and the water body may no longer be monitored if the risk of exceeding the EQS is considered to be low. Water column monitoring is currently limited to the Forth and Tay and the Clyde SMRs and for a limited range of contaminants.

Contaminants (metals, pesticides, industrial chemicals and pharmaceuticals) are measured in water samples to assess the chemical status of WFD water bodies. Across Scotland, 503 of the 504 (99.8%) coastal and transitional water bodies have met EQS since WFD classification started in 2007, meaning that, in most cases observed, concentrations are not likely to have adverse effects on the aquatic environment. Concentrations of most contaminants in transitional and coastal waters are low and often not detected. Therefore, contaminant monitoring in most water bodies has been discontinued, with routine monitoring continuing only in the most industrialised and urbanised SMRs (Clyde, and Forth and Tay) where contaminant pressures are greater.

The one failing waterbody is the Inner Clyde estuary, which failed for one heavy metal (chromium VI) in 2015, 2016 and 2017. The Annual Average (AA) EQS for chromium VI is 0.6 µg l-1. In the latest classification (2017), observed levels of chromium VI in the inner Clyde were double those permitted by the EQS.

The presence of chromium VI in the Inner Clyde is primarily associated with a known localised land contamination pressure in south east Glasgow. The chromium is in waste deposits from a historical chemical manufacturing facility that closed in the 1960s. Remedial work is underway that aims to reduce levels of chromium VI in soil and groundwater by converting it to the less toxic, less soluble chromium III.  These remediation works are part of a long term 15-20 year redevelopment plan by the Clyde Gateway which commenced in 2012. 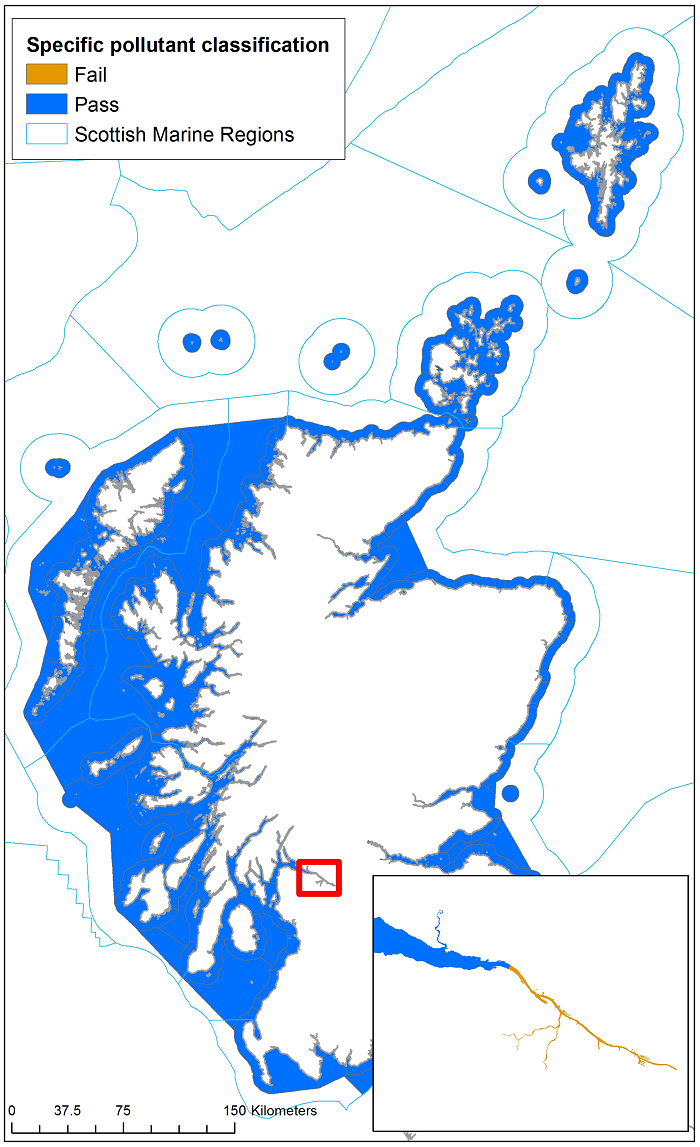 In the Marine Atlas (Baxter et al., 2011) hazardous substances in water were only assessed using data from 2009 for cadmium, lead, zinc, copper and lindane. None of the samples from 2009 breached EQS, which is comparable to findings from this assessment. In 2011 chromium VI, the only contaminant to breach EQS in this assessment, was not assessed.

99.8% of Scotland’s transitional and coastal water bodies have achieved Good chemical status as part of the Water Framework Directive. The only failing waterbody is in the Clyde and is caused by chromium VI from a known land contamination issue that has a remediation plan.

Monitoring as part of the WFD is targeted as it is not possible to monitor for all hazardous substances in all water bodies every year. Targeted monitoring relies on knowledge of known contaminant sources and ecological data where there may be unknown pressures. Likewise, certain contaminants have physico-chemical properties that mean they move to sediment or biota and cannot be measured in the water column.

The substances listed as part of the WFD only represent a small fraction of the chemicals that are released into the environment.

Many of the EQS for metals in marine waters are for dissolved metals (e.g. copper and zinc). At present SEPA analyse only total metals. This monitoring has in some cases produced results above the dissolved EQS in the Forth and Clyde estuaries, and it is unclear whether collection of dissolved data would produce EQS failures.

The substances listed as part of the WFD are deemed those likely to pose most risk to the environment according to their intrinsic hazard and likelihood of environmental exposure. They therefore only represent a small fraction of the chemicals that are released into the environment. In addition, less is known about the mixture effects of chemicals in the water column on marine ecosystems; work is currently underway to better understand and quantify mixture effects (e.g. Altenburger et al., 2015).

The concentration of contaminants in the water column assessment is based on waterbody classifications which cannot be scaled to Scottish Marine Regions. As such SMR status and trends are not presented.