Stratification is when a sharp density gradient between a surface mixed layer and deeper water masses occurs. It can be due to differences in the temperature, salinity or both between the two layers. Deeper regions on the shelf experience seasonal temperature stratification, while many Scottish coastal regions are also stratified due to freshwater inputs. 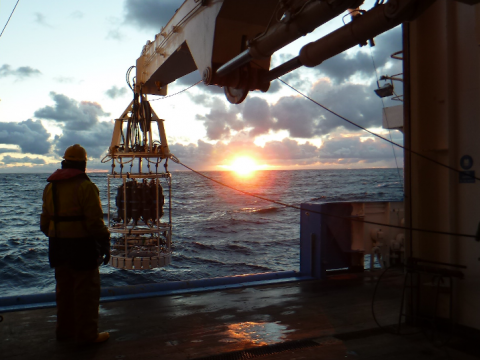 The vertical structure of the seas and oceans can at times show a sharp density gradient between a surface mixed layer of relatively uniform density, and a similar near-bed layer. These two layers can differ in their temperatures, salinities or both. This stratification occurs most often in estuaries or regions of freshwater influence, or seasonally in regions where the relative contribution of tidal mixing is insufficient to fully mix the incoming solar heat input in spring and summer throughout the water column.

Stratification forms a boundary for the exchange of chemical compounds and passively drifting particles between the two layers, for example, reducing the atmospheric exchange of oxygen, and limiting the supply of nutrients to the surface layers. This can be particularly important for marine organisms: the reduced surface exchange of oxygen can lead to oxygen depletion near the sea bed, and the limitation of nutrient supply to the surface layer places limits on phytoplankton growth in the euphotic zone.

Fronts are where the water column transitions from a stratified to mixed vertical structure. These regions are important from an ocean circulation perspective, as frontal jets flow parallel to this boundary between the stratified and mixed regions.  On the UK continental shelf, there is a near-continuous chain of jets which connects the south of Ireland to the northern North Sea during the summer-stratified season (Hill et al., 2008).

The stratification data presented here are output from the Ocean Data Tool (ODaT) project. This project created a climatology of the “typical” stratification conditions from historical in-situ observations. The data product does not apply any smoothing, which means that the locations of some observations are visible as “hot spots”. The underlying historical data were sourced from the World Ocean Database (Boyer et al., 2018) and processed using Hydrobase (Lozier et al., 1995). The data do not fully cover all of the Offshore Marine Regions, with data gaps in Hatton and the Faroe-Shetland Channel. This is due to the data product created during the ODaT project not covering these areas.

Here, the Potential Energy Anomaly (PEA, [J m-3]) is used as a measure of the strength of stratification. PEA is the amount of work required to fully mix the water column. For a fully mixed (homogenous) water column, PEA is zero; while it becomes increasingly positive as stratification increases. Generally, once PEA reaches 10 J m-3, the water column is considered stratified.

Due to a lack of observational data at sufficiently resolved spatial and temporal scales, the assessment only describes the general state of the water column stratification in Scottish waters. It is unlikely that existing numerical model output will be able to fill this data gap, as these often struggle to accurately predict water column density profiles (mainly due to problems with accurately modelling salinity).

Here, the freshwater input from land run-off in winter can be large and, although mean stratification is relatively low, individual events of significant stratification can occur, with a similar strength to the summer time maxima observed in other Scottish regions.

The regions with significant summer-time stratification are those where the bathymetry is generally sufficiently deep, or tidal currents are relatively weaker, so that the solar heat input from spring onwards is insufficiently mixed through the water column, allowing for a surface warm layer to be created.  In Scottish waters, this applies to all the Offshore Marine Regions.

Tidal mixing fronts occur where the vertical water column structure transitions from mixed to stratified. Along these fronts, strong jet-like currents form due to the density structure. Two main tidal mixing fronts occur in Scottish waters (Figure 2): the Islay front in the Argyll and Solway SMRs, and the fronts between Orkney and Shetland (which can at times be found in the North Scotland Shelf, Orkney, Shetland, East Shetland Shelf and Fladen and Moray Firth Offshore regions).

Large regions of Scottish waters stratify in the summer-time when the solar heat input is relatively large and the tidal currents are too weak for the water depth to fully mix the heat through the water column. The Clyde also shows large individual events of strong stratification in winter-time, due to large freshwater run-off events. Stratification is important as it reduces the ocean-atmosphere exchange for parts of the water column, reducing the near-bed oxygen, and limits the nutrient supply to the surface layer, thus impacting the primary productivity.

As the regions of seasonal stratification are determined by the bathymetry and the strength of tidal currents, any process which influences the latter will shift the stratification regions. Research has suggested that large-scale tidal energy extraction could have an impact, but more work needs to be done. Climate change can also affect stratification through changes in solar radiation or wind stress. Seasonal stratification limits the ocean-atmosphere exchange for the near-bed water masses in stratified areas, and therefore can reduce the near-bed oxygen concentrations towards the end of summer.