Suspended particulate (inorganic) matter (SPIM) is used as an indicator for seawater clarity, also referred to as turbidity. The highest SPIM concentrations are found in coastal regions with high riverine input e.g. the Solway, Forth and Tay regions; offshore regions have consistently lower SPIM. There is some seasonality with SPIM higher in winter-time. 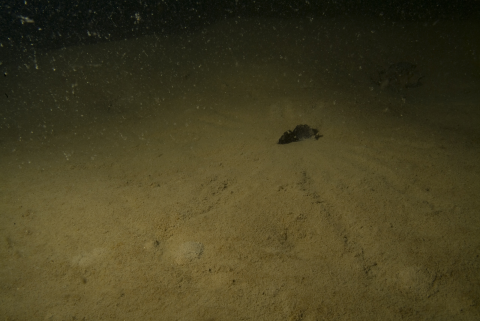 Increased turbidity of marine waters has the potential to impact the productivity of photosynthetic marine organisms, by reducing the amount of light that passes through the water column. However, suspended particles may also increase the nutrient concentrations and therefore positively affecting primary producers.

SPIM can be brought from land to sea by freshwater outflows (river or sewage discharge), and can also be re-suspended from the sea bed into the water column by turbulent mixing (from tidal currents and wind). SPIM can also be affected by activities on the sea bed e.g. dredging, trawling and marine construction. Due to these processes, shallow, coastal waters generally have higher SPIM concentrations than deep, offshore regions.

Satellite ocean colour measurements allow for the observation of SPIM on a large spatial scale, but often include some degree of temporal averaging and interpolation to deal with cloud cover. Moreover, algorithms to derive SPIM concentration from satellites are often developed for specific regions and may not yield accurate results in other regions.

The assessment of turbidity was undertaken by Marine Scotland Science, based on data compiled by CEFAS (Centre for Environment, Fisheries and Aquaculture Science) for the Marine Online Assessment Tool.

Ocean colour satellite sensors measure sunlight being backscattered by the water and its constituents (dissolved coloured matter and particles). To convert this colour to meaningful quantities (such as chlorophyll a or suspended sediments), a number of algorithms have been developed. These can be sensitive to the initial region for which they were established, creating uncertainties in the data.

The data do not cover all of Scottish waters, and extend from 54° N to 57° N and from 12° W to 5° E, due to satellite measurement constraints. The following Offshore Marine Regions (OMRs) and Scottish Marine Regions (SMRs) are only partially represented: Bailey, Rockall, Faroe-Shetland Channel, North Scotland Shelf, North and West Shetland Shelf, East Shetland Shelf and Shetland, so additional care should be taken in interpreting data in the regions. There are no data for the Hatton OMR. Winter sun angle, weather conditions and cloud cover all affect the collection of ocean colour data north of 57° N.

The 1998-2015 climatological average shows there is a marked difference in SPIM concentration between the north/south and coastal/offshore regions within Scottish waters (Figure 1). Turbidity is highest in the coastal areas with high freshwater input i.e. Solway Firth, Clyde, Argyll and Forth & Tay river plume. The more northerly coastal regions have lower SPIM loads than the southerly regions. The offshore regions have lower SPIM than the coastal regions. Compared to the southern North Sea, the northern North Sea has much lower concentrations of SPIM. 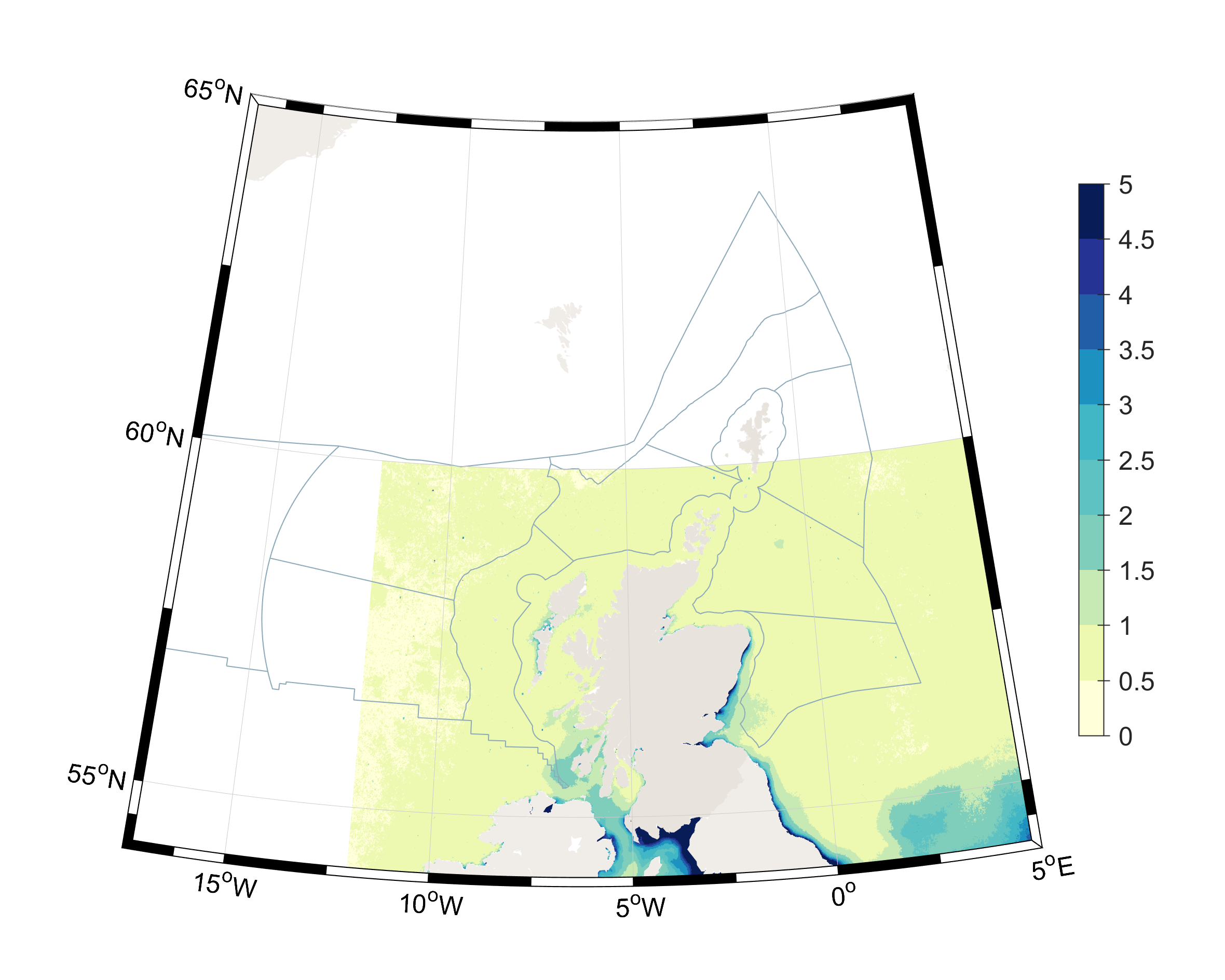 It is not appropriate to assess trends using this data set, due to the poor spatial coverage of some regions. Data for December are missing for 7 out of 10 regions from 2007 onwards (most likely due to cloudiness and winter sun angle reducing observations).

Relatively high SPIM concentrations (>3mg/l) occur in the Forth and Tay, Clyde, Argyll and North East regions. These concentrations are on average not as high as those in the Solway, and the duration of high concentrations is also not as long as for the Solway. Highest SPIM occurs in the winter months as more river run off means more sediments are washed down to the sea. Also, stronger winds and waves and storm events act to re-suspend sediment from the shallow coastal waters. There are missing data for northerly coastal regions in December 2007 onwards.

The high SPIM concentrations in the Solway and Forth and Tay (and to a lesser extent North East) regions are most likely due to the large estuaries in these regions.

No trend assessment has been included due to insufficient data and the need for more in situ observations to validate the satellite data. Ocean colour measurements and algorithms are continuously improving, but often rely on detailed measurements of water optical properties and suspended sediment concentration.

No comparison has been made to the 2011 data. The previous marine assessment (Baxter et al., 2011) displayed turbidity data from a numerical model.

Here, an improvement has been made on the previous assessment method by using a validated and quality assured observational data set. However, the algorithms used to derive SPIM from ocean colour remote sensing images are complex, and sensitive to the regions where they were initially developed for. More work on remote sensing of suspended matter in Scottish waters is needed to improve confidence in these data, and allow for the analysis of trends.

Large gaps in knowledge exist due to limitations of ocean colour satellite data.

The highest SPIM concentrations occur in the coastal regions with high river influx and during the winter months.

In general, most regions have low SPIM concentrations (<3mg/l) on average.

Due to the nature of the observations there is limited confidence in offshore regions, although these are also where SPIM concentrations are lowest.