Understanding the environmental impacts that may arise from the siting and operation of marine renewable energy developments is crucial to the success of the wave and tidal energy industry. The Wildlife Analysis Project was funded by Scottish Natural Heritage (SNH), Marine Scotland and the European Marine Energy Centre (EMEC) with the aim of carrying out a comprehensive analysis of all the data gathered at the EMEC full-scale test sites. For EMEC’s Billia Croo wave energy test site, data collection covered the period from March 2009 to March 2015, whereas observations at EMEC’s Fall of Warness tidal energy test site were conducted for a longer period of time from July 2005 to March 2015.

Two key relationships were investigated during this project as follows: 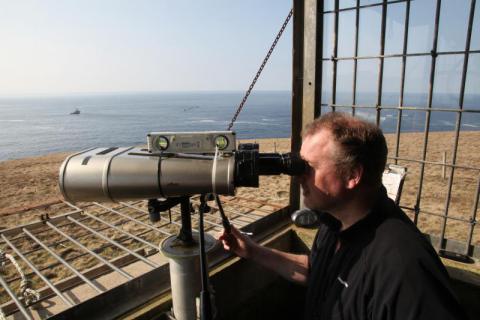 The data analysis phase of the project was guided by advice from the Centre for Research into Ecological and Environmental Modelling (CREEM).  Initially, exploratory data analysis was conducted to enable an understanding of the behavioural patterns, both temporal and spatial, associated with each species. This initial analysis allowed more robust conclusions to be drawn from the outputs of the secondary analysis, particularly for any seasonal patterns and environmental influences on species abundance and distribution at each site. The second part of the analysis considered the operational status of the site. With the cooperation of developers testing at the EMEC sites, it was possible to assign four different operational statuses to site, which were categorised as: baseline conditions, support structures onsite, device onsite but not operational, device onsite and operational.

Statistical techniques, based on the Marine Renewables Strategic Environmental Assessment (MRSea) package developed by CREEM and commissioned by Marine Scotland, were used to quantify any spatially-explicit change attributable to device testing on key seabird and marine mammal species at the test sites.  For each operational status, any differences in animal numbers or distribution were identified, with a particular focus on any redistribution within the test sites. Although redistribution might occur naturally over time for many species, the spatially-explicit attribute of the modelling assists in interpretation of observed change.

It was important to understand the effectiveness of the models in detecting species changes. This was achieved by carrying out a power analysis.

The power analysis was conducted using a simulations-based approach. A range of scenarios were used to investigate the ability of each species model to detect various-sized reductions or redistribution in the underlying abundances of the relevant bird and marine mammal species. In addition, the power analysis allowed data for each species to be simulated (given the variability seen in the system) and sampled in a variety of ways (for example, for low survey effort or for current survey effort) to establish at what point changes in abundance could be detected.

The Wildlife Data Analysis Project provides an insight into the potential displacement and/or redistribution of wildlife within the study regions that can be associated with marine energy converter activity, and appropriate data analysis methodologies. Further, the study considers whether there is a need for ongoing monitoring and, if so, recommends potential improvements to the data collection methodology.

The full report is available on the SNH website – Commissioned Report 947: Analysis of the possible displacement of bird and marine mammal species related to the installation and operation of marine energy conversion systems (see table below).

Available below are the cleansed datasets utilised during the analysis and the predicted abundance data for each of the ten species or species groups from the tidal test site, Fall of Warness, and wave test site, Billia Croo. Some of the figures from the report are also available for download below.

If you require any more information about these data or the cleansing methodology please contact info@emec.org.