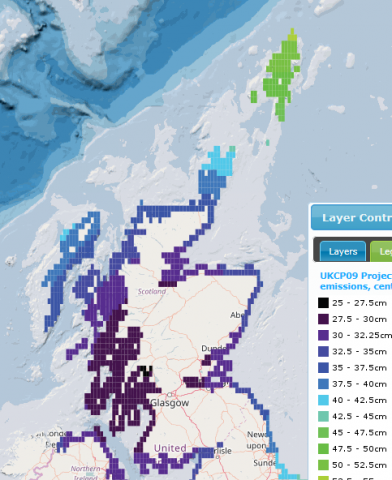 Relative Sea Level - the least predicted rise, about 30 cm by 2095, occurs in the Clyde to Skye coastal waters, as well as the inner Firth of Forth and Moray Firth. The remainder of the mainland experience approximately 35 cm rise over the same period, while the Hebrides and Orkney experience a rise of 40 cm, and about 50 cm in Shetland.

Storm surges / tides - current estimates do not suggest storminess will increase significantly over Scotland making the predictions of increases in storm surge heights over the next 100 years small. For example extreme storm surges with return periods of 2, 10, 20 and 50 years are between about 1 and 3 cm by 2095. There is some regional variation.  Currently, the highest storm surge that may occur in a 50-year period raises the sea surface by between 90 and 180 cm. The effect is least on the east coast and in Shetland, and greatest on the west coast. The central estimate predicts that by 2095, these extreme water levels will have changed very little.

Wave height -  significant wave heights north of Scotland will decrease by about 30 cm in the winter.  The other seasons have different patterns of change, although changes are quite small.