Polybrominated diphenyl ethers (PBDE) were one of the most widely used groups of brominated flame retardants (BFRs) in Europe until their ban in 2004. BFRs reduce fire hazards by interfering with the combustion of polymeric materials. PBDEs were manufactured for their thermal stability. PBDEs are therefore persistent chemicals because they contain chemical bonds that are not found in nature, and take a lot of energy to split apart. This means they cannot easily be broken down by routes normally used to dispose of waste such as light, UV, heat or by the action of microbes. PBDEs can accumulate in shellfish and fish, where they are taken in either directly from the marine environment or indirectly through food consumption. Highest concentrations are found in marine mammals, as concentrations increase through the food web.

PBDEs are routinely monitored in fish and shellfish for the Clean Seas Environmental Monitoring Programme (CSEMP) but are not routinely monitored in grey seals from Scottish waters because they are not part of the Defra and Cefas monitoring programme that assesses persistent organic pollutants (POPs) in stranded cetaceans. Throughout the UK, enough cetaceans (whales and dolphins), particularly harbour porpoise, strand annually for samples to be collected that provide detail on the differences in POPs over time, with age, between sexes and throughout different regions of the UK in these top predators. The stranded cetacean samples are more straightforward to collect and representative of UK wide POP levels than samples from live, wild seals. The research run by the Sea Mammal Research Unit (SMRU) (at the University of St Andrews) to investigate long term breeding success in grey seals is not a monitoring programme but focusses on adult females and pups, and only in specific locations. This means it would not provide a large enough temporal and spatial scale, and is not representative of all ages and both sexes, to give sufficient scope and detail for a regular and UK-wide assessment. 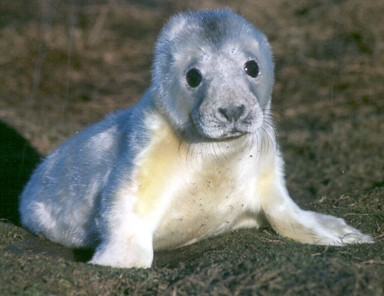 Figure 1: Fasting grey seal pups on the Isle of May. © SMRU.

However, in 2015 - 2017, researchers at Abertay University, in collaboration with SMRU were funded by the Natural Environment Research Council to measure POPs including PBDEs and explore their effects on the way grey seal pups gain fat when suckling and lose it when fasting in grey seal pups. This project made use of the SMRU long-term research programme that tracks the breeding success of grey seals on the Isle of May in the Firth of Forth.

PBDEs were measured in the blubber of grey seal pups sampled during the suckling period, when they are reliant on milk from the mother, and their post weaning fast, which they undertake for 10 - 40 days once the mother leaves them to feed at sea, in October – December in 2015 - 2017. Pups accumulate POPs, such as PBDEs, from milk which concentrate in their fat as they fast after weaning. PBDEs were measured in blubber biopsies, by the Centre for Analytical Research and Technology (CART) at the University of Liège, Belgium.

There are currently no toxicity thresholds available for PBDEs in marine mammals. Total PBDE (sum of nine compounds) concentrations in all pups were below 20 ng g-1 lipid weight. Total PBDE concentrations were up to 7 times lower than in adult females from 2008 (Vanden Berghe et al., 2012); 10 - 20 fold lower than PBDEs in North Sea adult harbour seals from the late 1990s to early 2000s (Weis et al., 2009), and an order of magnitude lower than values reported in UK grey seal pup blubber from 1998-2000 (Kalantzi, Hall, Thomas & Jones, 2005), but this may be partly due to technical differences in the methods used to measure them (Robinson et al., 2019). Although seals breed in the Forth, they typically forage further out to sea rather than in the immediate area, therefore the PBDE concentrations observed are representative of the wider North Sea rather than of the local area. The very low PBDE levels in 2015 - 2017 pups compared to other species, areas and earlier data, suggest that adult female seals in the North Sea are eating fish with lower PBDE levels than in previous decades, and that they do not forage in areas that have high levels of contamination from either a localised point source or run off. This means the levels they pass on to their pups are lower. However, adult males and juveniles, which have longer to accumulate PBDEs and cannot get rid of them by passing them onto offspring, will have higher levels than the concentrations seen in the pups. This makes it difficult to compare between different species and age classes.

Trends cannot be assessed because there are only 3 years of data in this time series.

It has been suggested that PBDEs could disrupt the way body fat stores are regulated (Lee et al., 2016) as well as alter thyroid hormone (TH) production, plasma levels and the way TH are transported in the blood stream (Hall, Thomas & McConnell, 2009). This is a possibility even though PBDEs are not the most abundant type of POP present in the body. However, PBDE concentrations reported here were very low and not related to TH levels (data under analysis). However, PBDEs may work with other POPs, such as PCBs, to alter the way blubber works and influence how efficiently pups gain mass that is provided as milk by their mothers (data in prep) through other routes. It can be difficult to disentangle cause and effect when investigating the relationship between body fat and POPs, because the levels of these chemicals change dynamically with the amount of body fat. 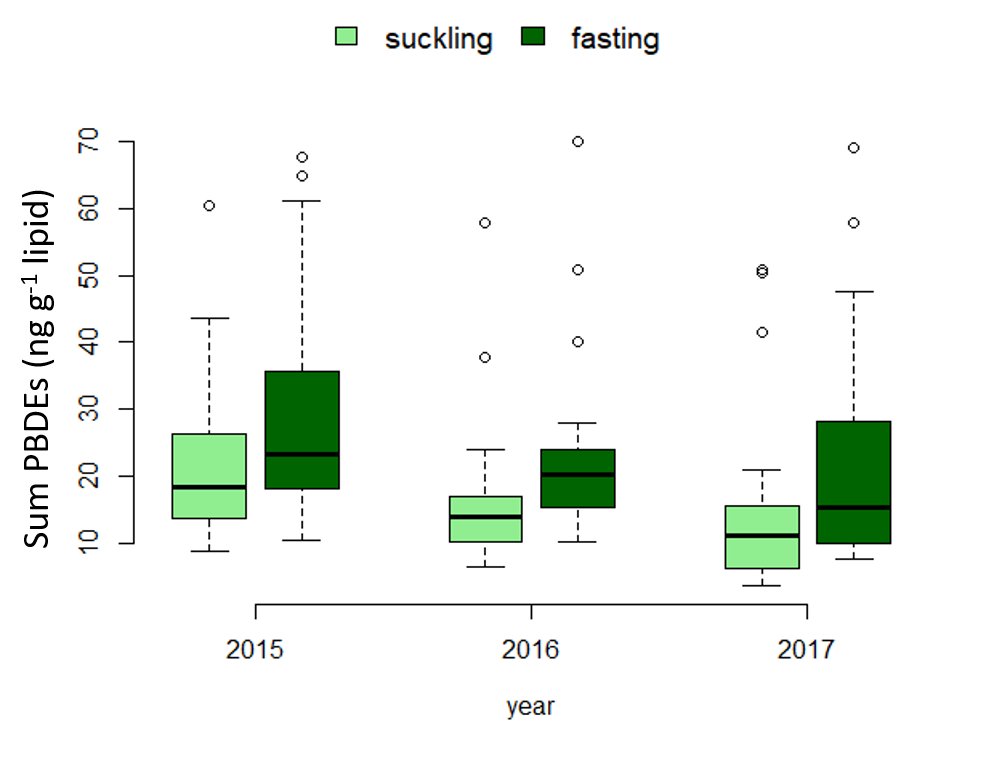 PBDE concentrations in the blubber of North Sea grey seal pups were very low compared to other published studies on seals. Current PBDE levels do not appear to have a large effect on the way body fat stores are regulated in North Sea grey seal pups. As more about the biological effects of PBDEs and the mechanisms through which they work is understood, it may be advisable to investigate toxicity thresholds for marine mammals.