A coastal study (Duffy & Stojanovic, 2018) investigated the similarities and differences in population, social and economic characteristics of 149 Scottish towns using the 2011 census. The study also investigated how the size of population, age and diversity of people living in these towns changed over time from 2001 to 2011.

This work provides a base line understanding of the social and demographic characteristics of Scottish coastal towns. It was funded by the Economic and Social Research Council and Marine Scotland to increase the social evidence base for marine planning in a Scottish Context. The study extends and improves the coastal community typology work undertaken in England and Wales (MMO, 2011 and Welsh Government, 2016).

Although the marine planning system is concerned with activities below high water mark, most offshore activities make landfall somewhere, so understanding how marine developments do or could impact coastal communities is important. There has also been considerable debate about how change is affecting places such as fishing communities, maritime towns, seaside or coastal retirement resorts. This study provides some evidence from the census data about these changes.

The analysis, which uses 2001 and 2011 census data, should inform national and regional marine planning by giving an insight into the patterns of socio-economic and demographic similarities and differences between Scottish coastal towns, providing a 2011 baseline across measures as well as how population structures in these towns have changed across time. As with the work from the England and Wales contexts, this has potential to inform development decisions through awareness of the wider socio-economic circumstances and demographic composition of coastal communities.

A typology was created from a two-stage cluster analysis of the data undertaken for coastal localities (defined as within 2 km of the coast) with populations of greater than 1,000 (for reasons of confidentiality). This 1,000 threshold explains why many smaller coastal communities do not feature on the maps. 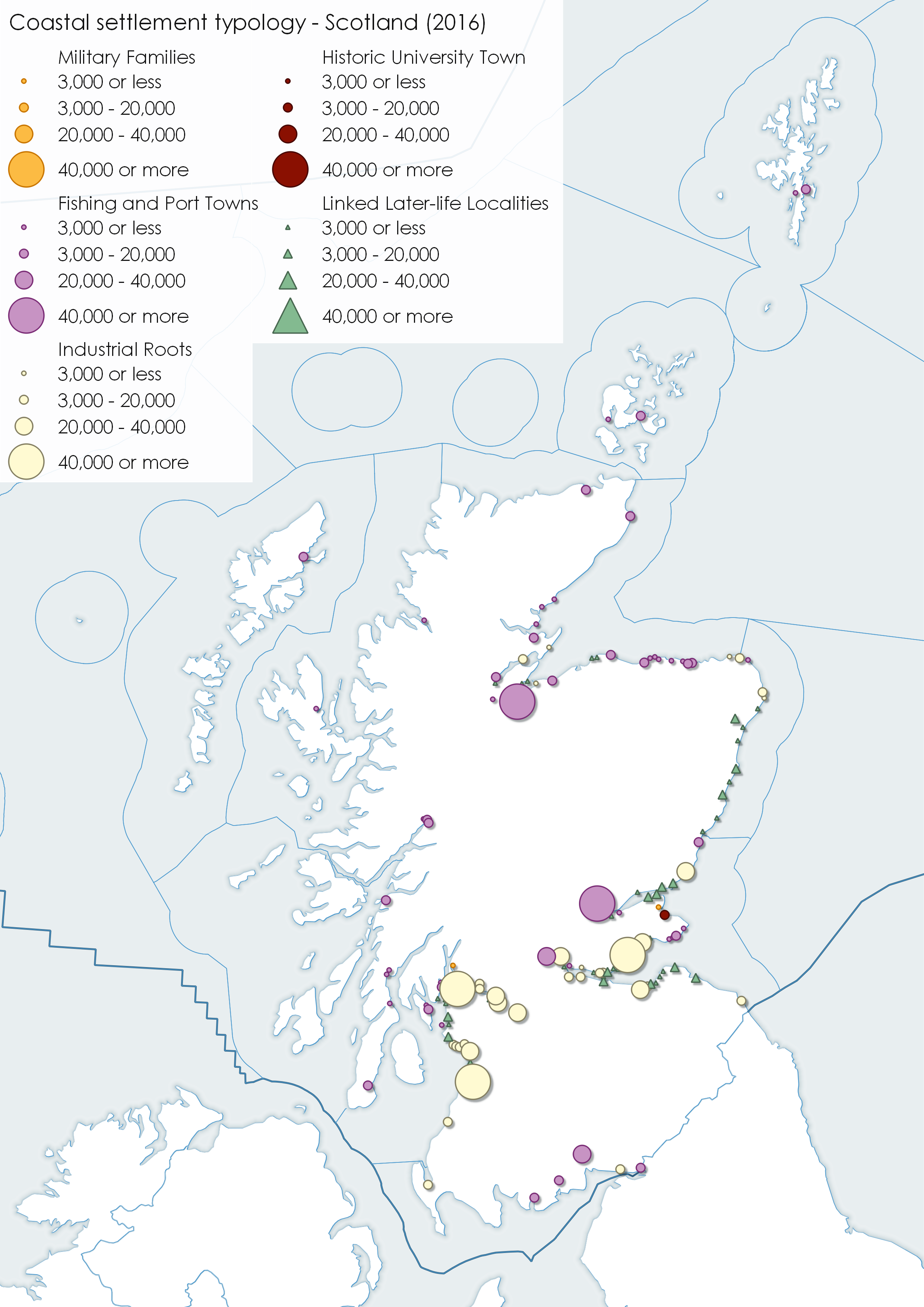 These indicators were then analysed across groups and compared to the coastal average to produce data driven descriptions for each type of place, and the general characteristic that can be expected to be observed for these types of places. 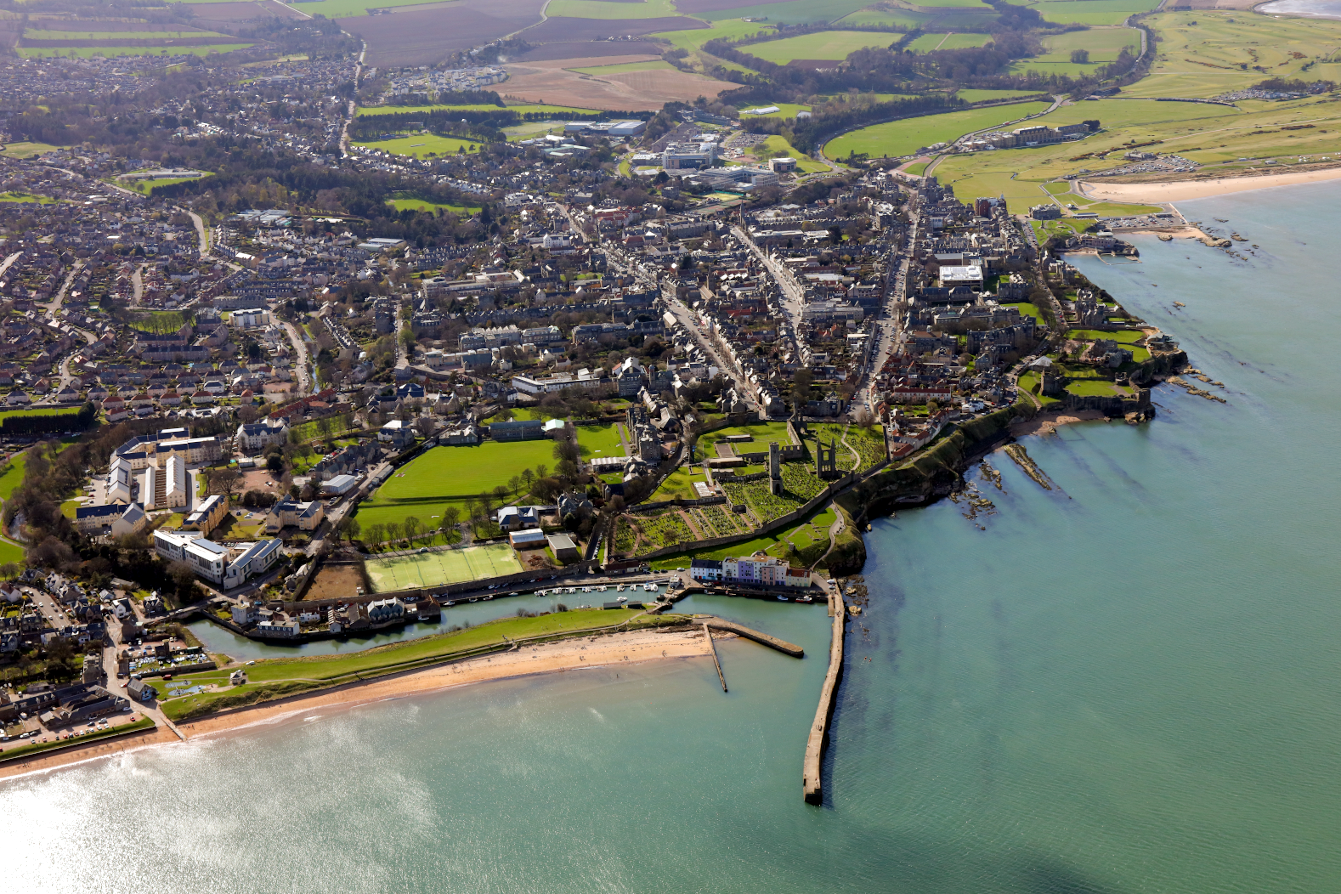 Observations for both national and regional level marine planning

The typology suggests a particular geography of coastal towns. Firstly, many of the localities on the peripheries of Scotland still play an important role with a strong maritime dimension, with varying importance of fishing or seaports, retirement moves and ageing in-place. Key groups within these communities have an intergenerational involvement in marine industries, which helps to maintain the cultural and economic heritage of these places. Secondly, there are towns which are located primarily in the central belt that are characterised by demographic and socio-economic challenges, shared with de-industrial communities across Scotland. Thirdly, a range of coastal localities clustered around the major cities of Scotland, which were previously perceived as maritime towns, are now increasingly playing a role as dormitory commuter or pre-retirement localities.

The findings of the research suggest that coastal towns are changing along a diverse set of trajectories. The findings also contrast with other general typologies which are not coastally specific, showing that there are specific issues for coastal localities. It is not a simple story such as ‘fishing communities are declining’. Indeed, by considering the second level of the typology and incorporating the change variables it can be understood that some Industrial coastal towns are growing and diversifying as a result of the international labour force which supports an industrial scale involvement in marine related industry found in places. Figure 3 shows industrial roots localities from the coastal settlement typology with its three sub-categories – homogenous Scottish; diversifying pre-retirement; and diversifying and isolated to illustrate this. 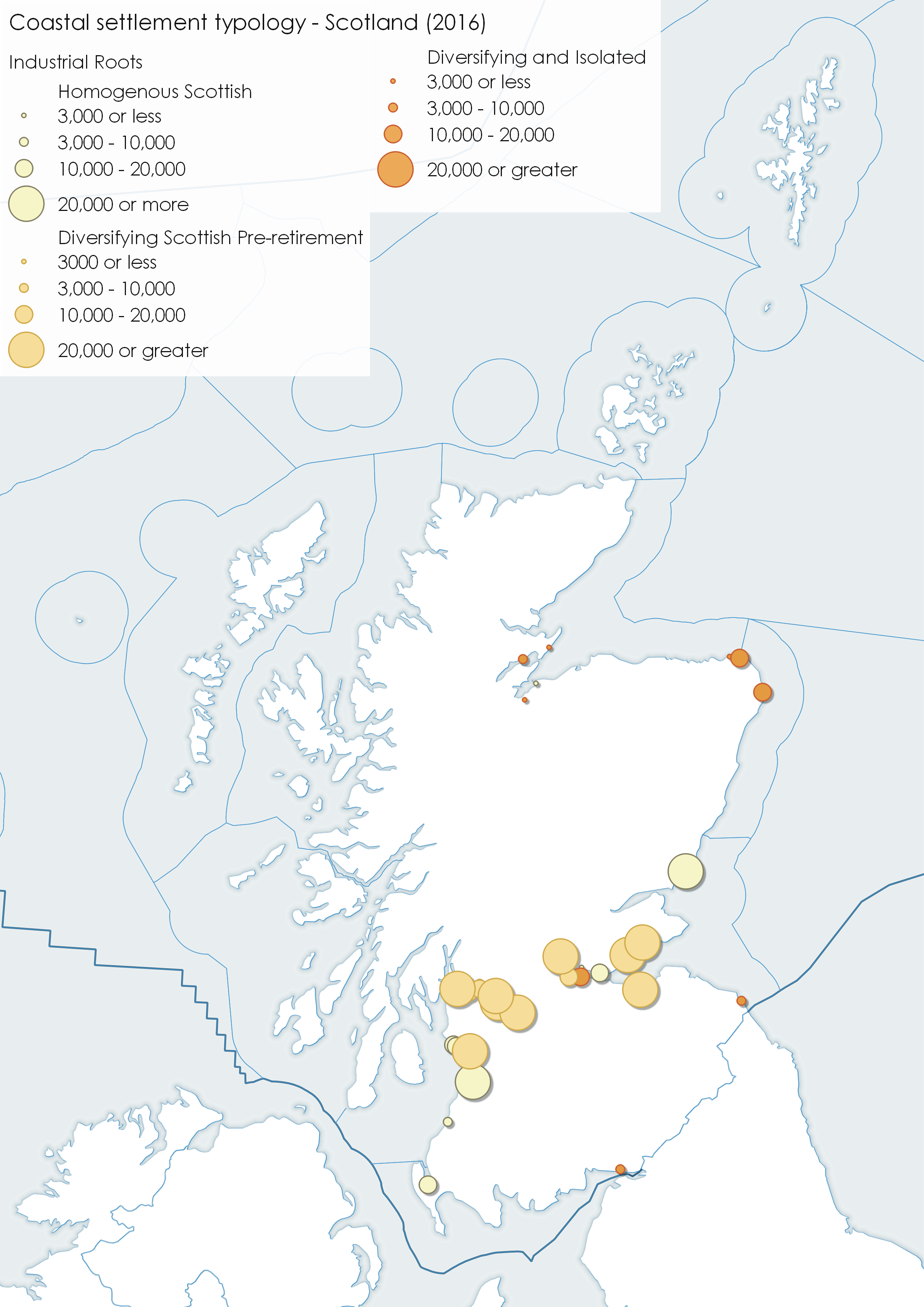 Therefore, care must be taken not to impute that because a locality has been classified in the typology that it will always or inevitably be this type of town or village. Planning should consider what places aspire to be, not just what they have been. The doctoral study also conducted a further phase of qualitative research in three coastal localities in north east Scotland, which provided an opportunity for residents to speak about their perceptions of their coastal town or village- such data is highly complementary in building a detailed understanding of coastal places.

For Regional Marine Planning the typology can be useful in conducting stakeholder engagement, to ensure consultation with different types of coastal place, and representation of diverse coastal localities not just the enthusiastic or usual suspects (e.g. evidence for Equality Impact Assessments developed by Marine Planning Partnerships). The typology can play a role at the baseline assessment phase by characterising population and socio-economic factors, and the understanding of these spatial patterns is important in establishing evidence based policy or strategies related to wellbeing, development and coastal regeneration.

For National Marine Planning the typology can be useful in identifying coastal localities which may be affected by landfall or servicing of a marine development, and providing a rationale to link offshore development with the character of coastal towns, thereby to evaluate the social sustainability of a proposal.

This study was the doctoral work of Dr Paula Duffy of the Marine and Coastal Environment Team at the University of St Andrews. Paula was supervised by Dr Tim Stojanovic, Professor Nina Laurie, Professor Allan Findlay of the School of Geography and Sustainable Development, and Dr Estelle Jones of the Scottish Government. The doctoral research was supported by the Economic and Social Research Council +3 Award (Reference 1506438) Funded in partnership with Marine Scotland, The Scottish Government. The outputs from this work included in this assessment were made possible by the funding of the Royal Scottish Geographical Society Early Career Knowledge Exchange Grant.