Scotland is well placed to generate electricity from the tide as there are a number of regions that experience high tidal currents. Tidal energy can be harnessed in a number of ways, from building barrages across estuaries that experience a large tidal range to placing tidal stream turbines in areas of high current speeds. Tidal stream turbines are becoming the most common method of extracting energy from the tide: individual devices are likely to have a much lower overall environmental impact than tidal range developments such as barrages and lagoons, and developments can be built in phases enabling the environmental interactions to be studied.

ICES (2019) reported that whilst there is one example of a large tidal barrage in Europe (La Rance, France, built in 1966), there are large environmental concerns over the construction of future tidal range developments, such as lagoons. Most effort is being put into the licensing of tidal stream developments (ICES, 2019), and Scotland has adopted a “deploy and monitor” approach with the developments being built in phases.

It is estimated that Scotland’s marine area contains 25% of Europe’s tidal energy resource (Scottish Government, 2015) and it has been estimated to have around 32 TWh per year of potentially exploitable tidal stream resource (The Crown Estate, 2012). In 2018 Scotland’s combined gross electricity consumption was 24 TWh (Scottish Energy Statistics Hub). There is therefore the potential for Scotland’s tidal stream energy sector to significantly contribute to Scotland’s future energy requirements. This tidal stream resource is found in the narrow channels and off headlands of many of the western and northern Isles and the north coast of mainland Scotland, with the Orkney Islands and the Pentland Firth containing much of this resource. 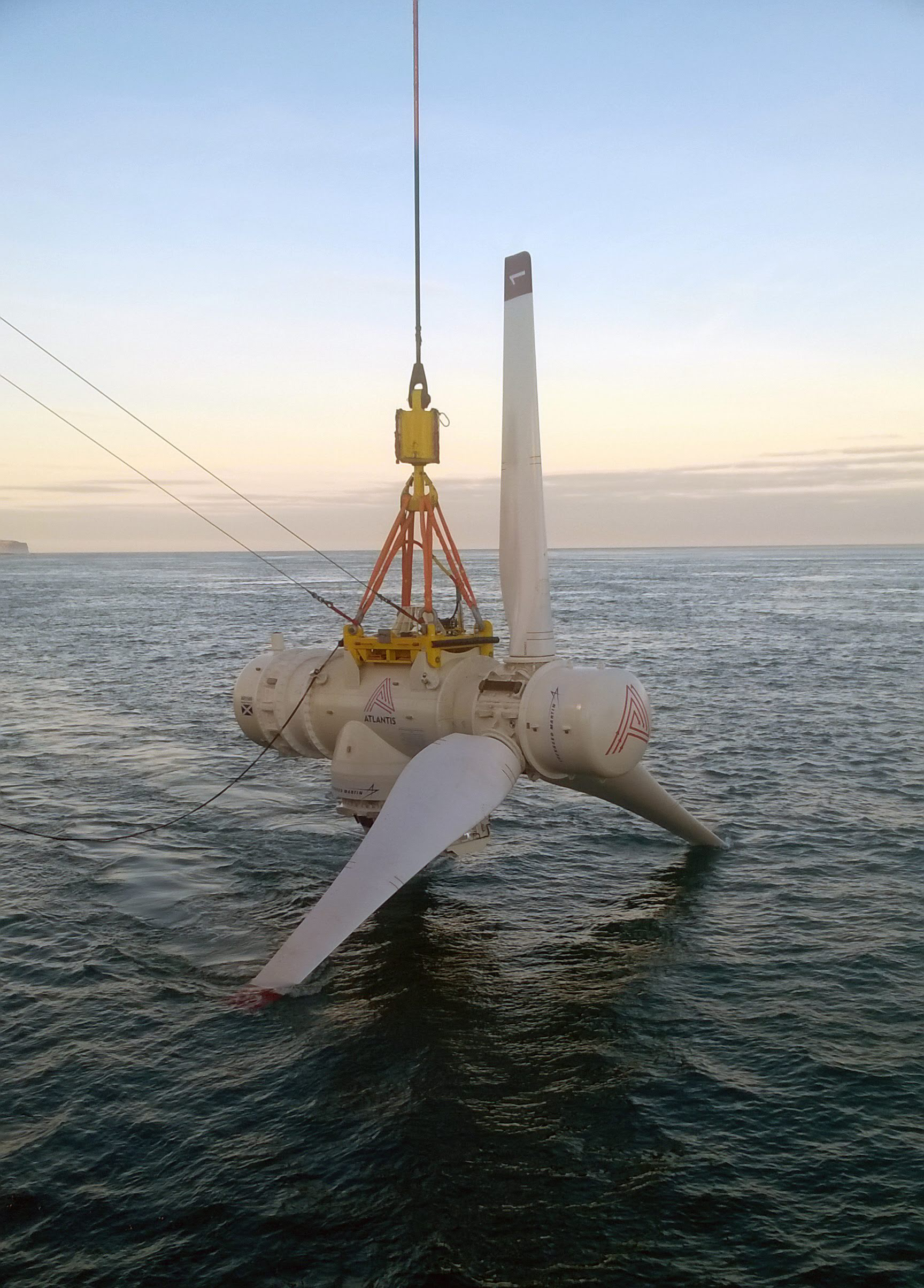 Scotland has a semi-diurnal tide which leads to tidal sites experiencing high current speeds four times a day (during peak ebb and flood) with short periods of low current speeds in between. There is also a 14.8 day spring neap cycle due to the interaction of the earth, sun and moon. This means that tidal stream electricity generation would vary, with four peaks every day and two peaks every month. This resource is however, unlike wind power, predictable (see Sea level and tides).

Figure 2 shows the distribution of the fastest depth average current speeds experienced during spring tides across Scotland. Current speed is shown here as a proxy of the tidal power resource in Scottish waters.  These data were obtained from a hydrodynamic model of Scottish seas – The Scottish Shelf Model. Figure 2 shows that the majority of the coastal seas around Scotland do not have tidal currents exceeding 1 m s-1, but there are small regions that regularly experience spring tide current speeds greater than 1 m s-1. However, most present day tidal stream turbines require speeds greater than 2.5 m s-1. Tidal power is proportional to the cube of the current speed, so significantly more power can be harnessed in these regions than in the slower 1 m s-1 regions. Figure 2 shows that there are limited locations where the tidal currents exceed 2.5 m s-1, mainly in the south-west (Argyll & Clyde regions) and the Orkney Islands and the Pentland Firth (Orkney Islands & North Coast regions). In these regions, there are a number of sites that experience fast tidal currents already leased to developers (see Renewable energy assessment). The majority of these sites are in the region known as the Pentland Firth and Orkney Waters (PFOW), which is also home to the European Marine Energy Test Centre (EMEC).

Figure 3 shows the typical spring tide velocities in the PFOW region, obtained from ​a high resolution hydrodynamic model of this region. In this region the fastest current speeds are found in the Pentland Firth, a channel separating the Orkney Islands from the north coast of mainland Scotland, where the current speed can exceed 5 m s-1. There are also a number of other Firths and Sounds where the currents are fast enough to make them viable sites for tidal stream energy extraction. See Neil et al. (2017) for a detailed overview of the Scottish tidal stream resource. 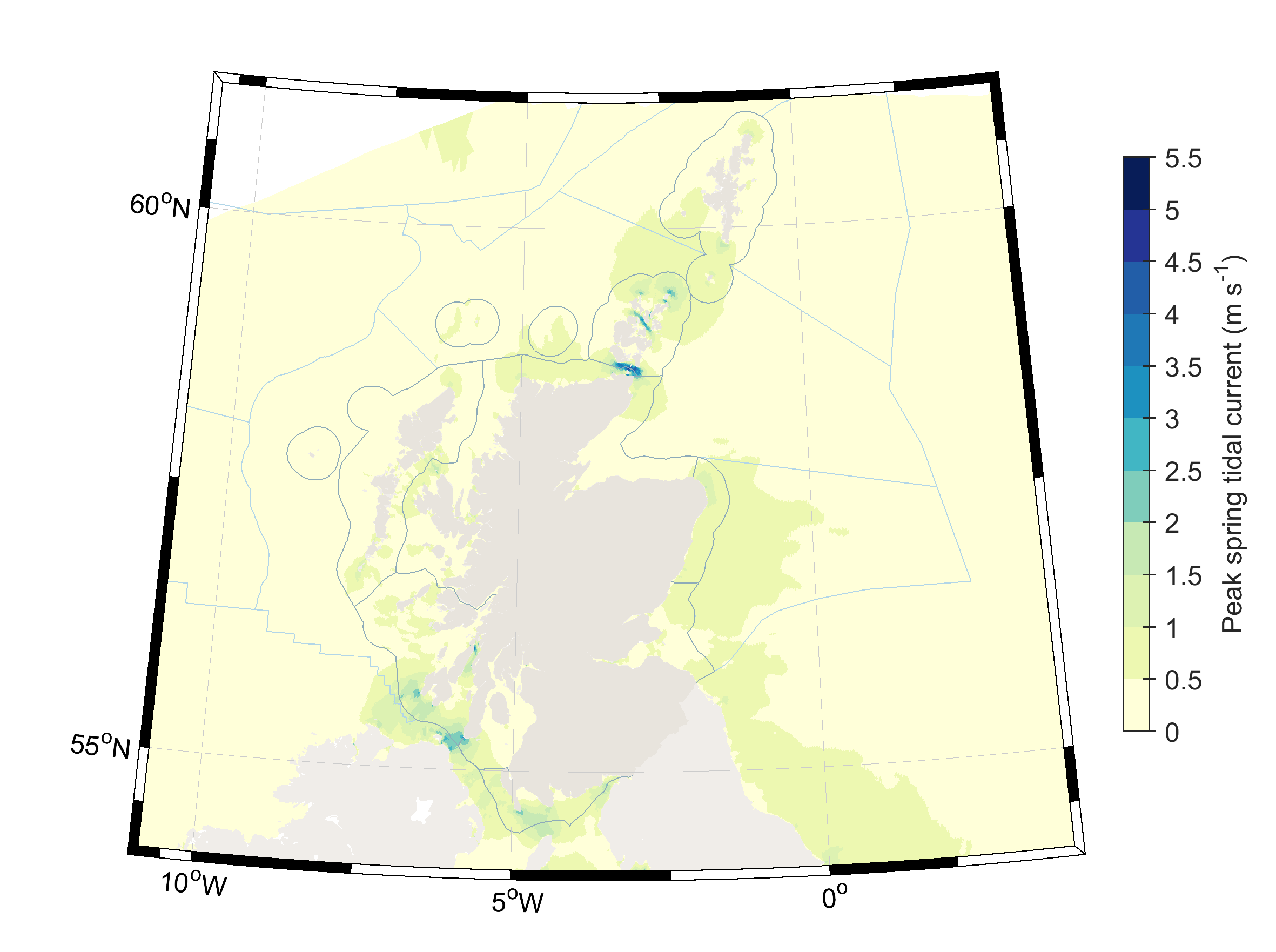 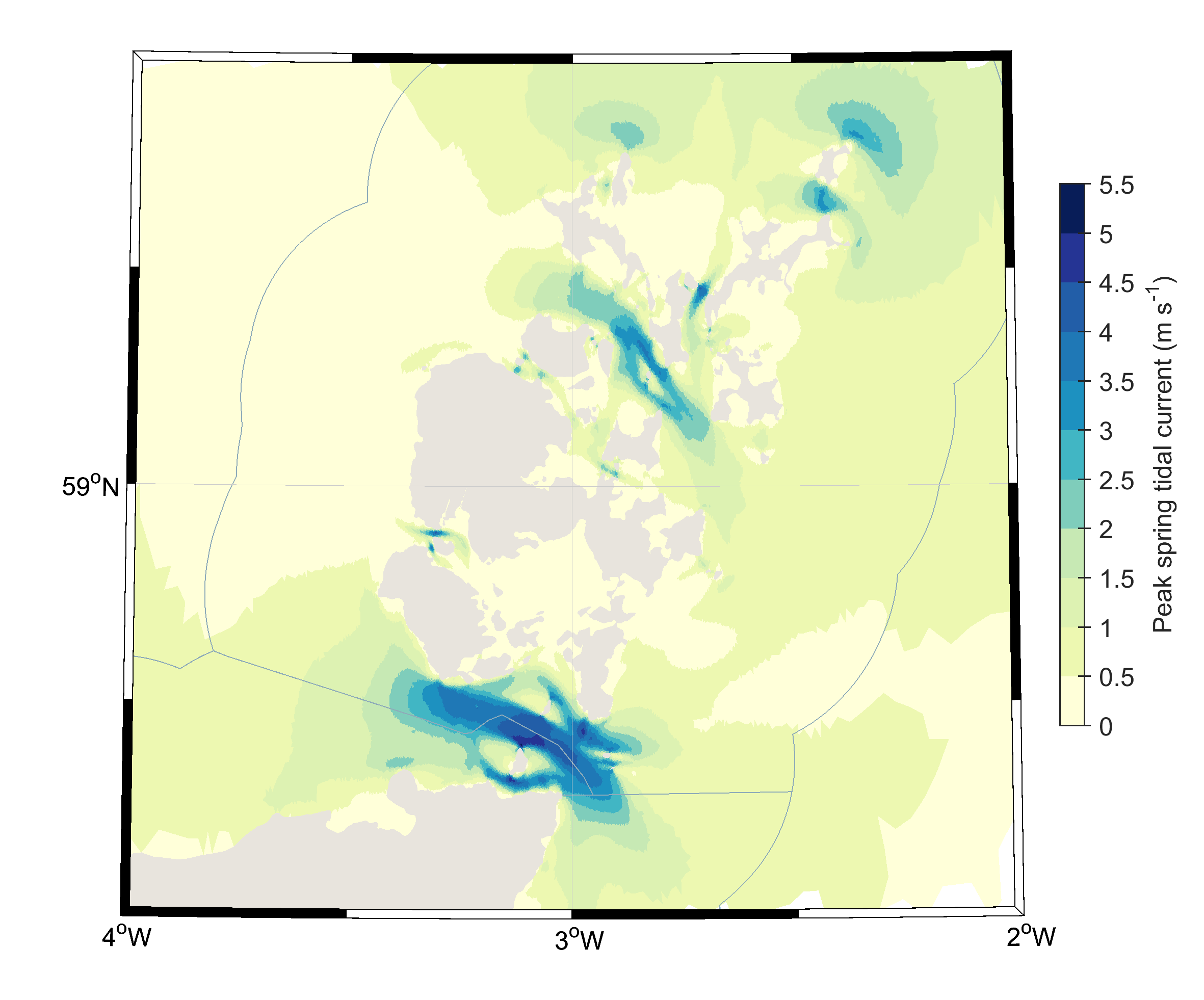 Tidal stream developments can have impacts on the physical, biological and wider ecological environment. Tidal stream developments remove kinetic energy from the tidal stream and therefore lead to a reduction of tidal currents downstream of the development. There are also likely to be regions of flow acceleration around developments as the flow tends to bypass restrictions. For this reason there is usually an upper limit on the amount of energy that can be extracted from a tidal channel (Garrett & Cummins, 2005; Waldman et al., 2019).

Once this upper limit is met, any additional attempt to extract energy will only reduce the energy extracted and further increase the physical consequences such as flow reductions (Bryden & Couch, 2007). It is therefore important to consider what the balance between energy extraction and physical change is, and how to optimise energy removal whilst minimising the environmental impact. The problem is a complex one as a tidal turbine will interact with the flow and could change the available resource both for itself and other turbines in the region (Funke et al., 2014; Vennell et al., 2015; Waldman et al., 2019).

Changes to the hydrodynamics could also lead to changes to vertical mixing and stratification in shelf seas, which could have some important ecological ramifications due to the biological importance of frontal regions (Sharples et al., 2006). There is also the potential for direct interactions between tidal stream developments and the biological component of the marine ecosystem, such as benthic organisms, fish, marine mammals and diving sea birds, and there have been a number of recent comprehensive reviews (e.g. Copping et al., 2016).