Scotland has two major centres of ship building and refits: Babcock Marine (on the Forth at Rosyth) (Forth and Tay Scottish Marine Region (SMR)) and BAE Systems Surface Ships (on the Clyde at Scotstoun/Govan) (Clyde SMR). Both centres played key roles in the construction of the Queen Elizabeth Class aircraft carriers, which started in 2009 and completed in 2019.

The Royal Navy has accepted into service HMS Queen Elizabeth, the first 65,000 tonne aircraft carrier, and the second, HMS Prince of Wales. Both were completed following construction at five UK sites (including the Clyde and at Rosyth) and assembly at Rosyth. HMS Queen Elizabeth has also been successfully dry-docked at Rosyth. Most of the detailed design and engineering has been undertaken at BAE Systems (Clyde) and Babcock (Rosyth). 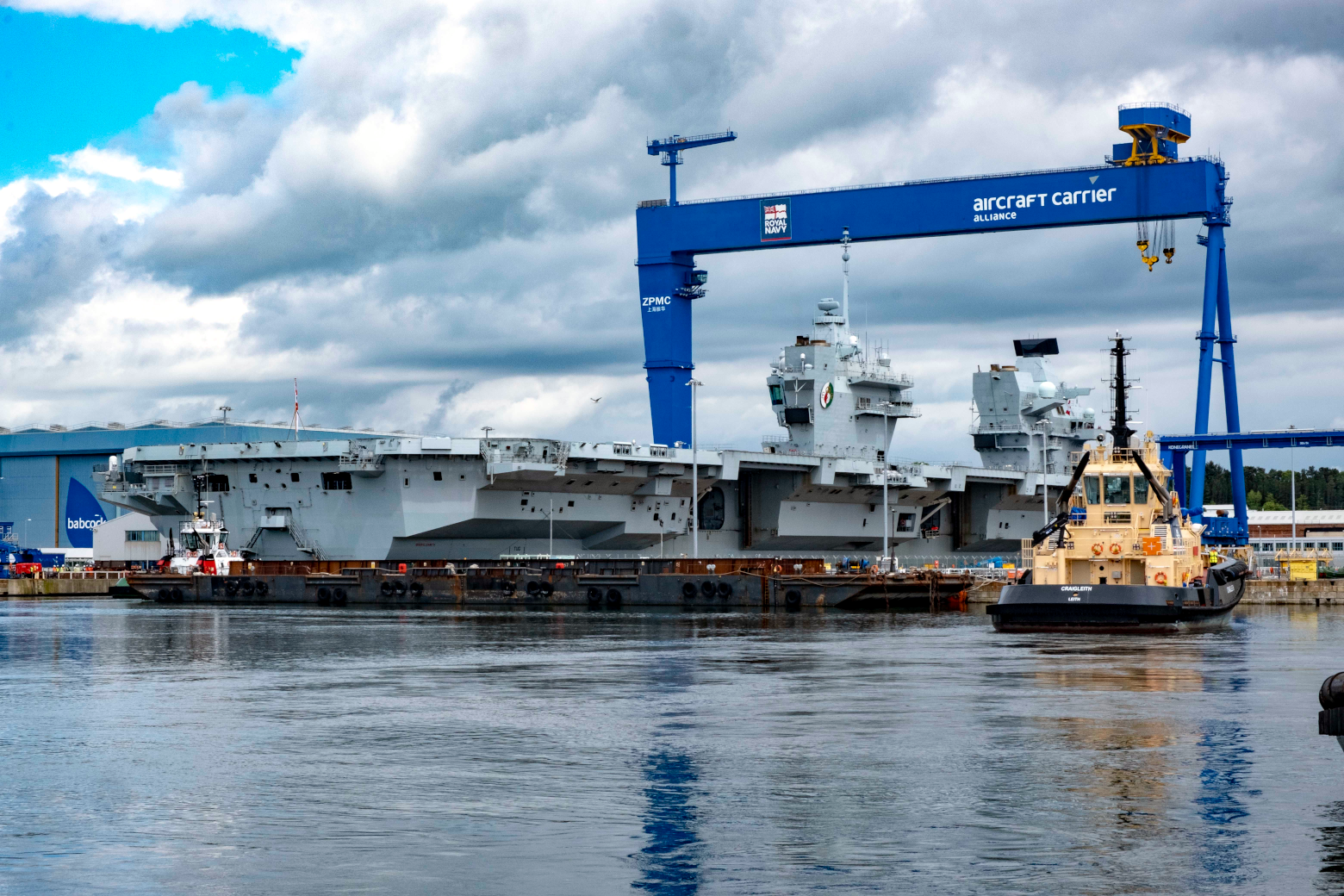 At its Scotstoun yard, BAE Systems has also designed and built Type 26 frigates and Offshore Patrol Vessels (OPVs), which it is selling to the UK and foreign navies. Ferguson Marine have also designed hybrid and hydrogen ferries for island routes.

Ship repair is an important and growing part of Scotland’s capabilities. HM Naval Base Clyde (Helensburgh) includes a large submarine maintenance facility operated for the Ministry of Defence (MOD) by Babcock. Offshore oil rig build/maintenance is available at Global Energy Group’s dry dock (on the Cromarty Firth at Invergordon and Nigg). In addition to the dry dock operations of Dales Marine (Aberdeen, Leith, Greenock, Grangemouth and Troon), build and repair capabilities are available at a range of smaller shipyards including Ferguson Marine Engineering Ltd and Alexander Noble (both Clyde), Peterson (Lerwick) and Macduff Shipyards (Moray Firth). 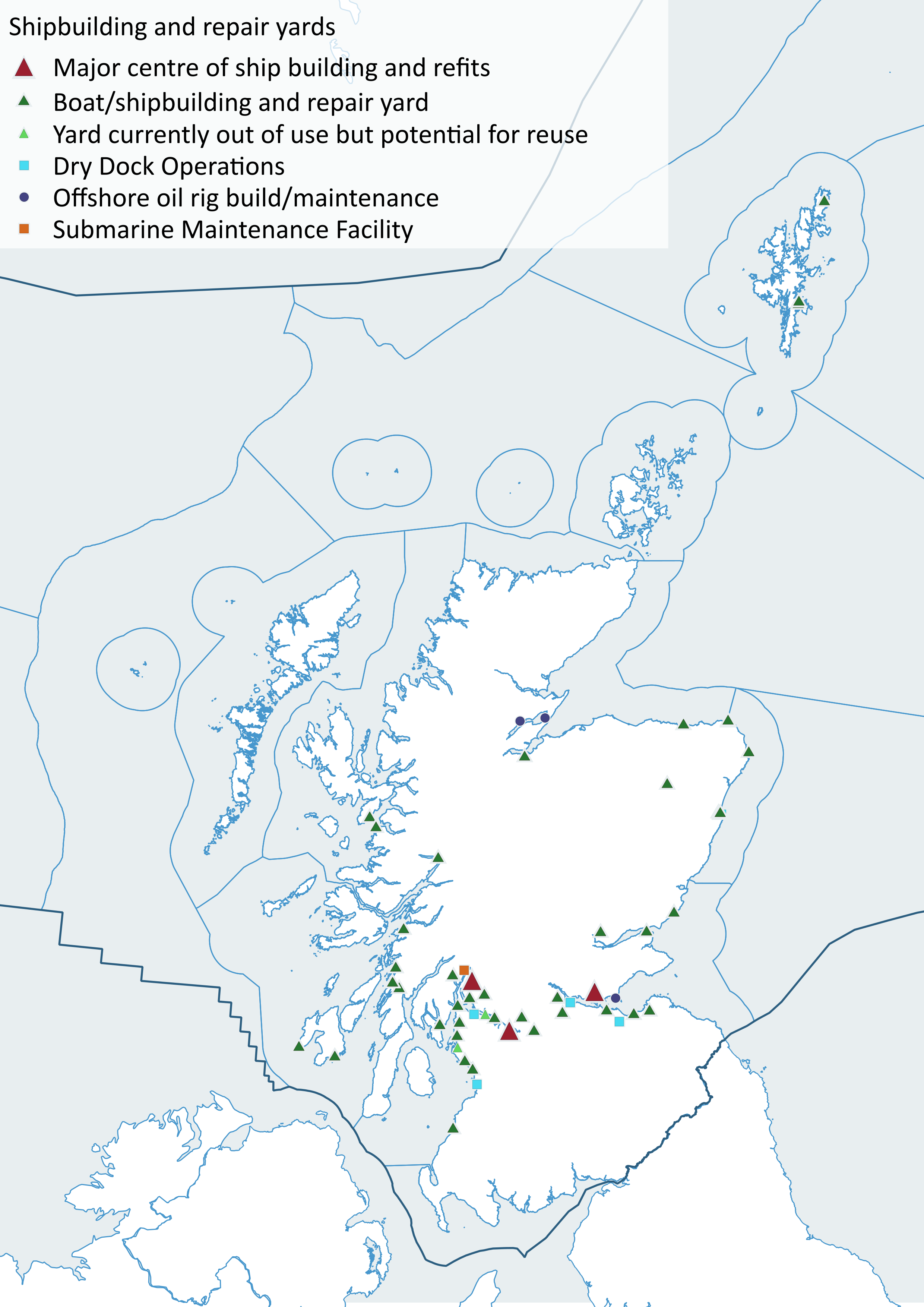 For the future, BAE Systems will be manufacturing the eight Type 26 frigates, for the Royal Navy, at their Govan and Scotstoun shipyards on the Clyde over the next 20 years. The new Type 26 frigates will replace the current anti-submarine warfare Type 23 frigates. They will also provide advanced protection for the UK’s nuclear deterrent and Queen Elizabeth-class aircraft carriers. Babcock has been named preferred bidder for the contract for a minimum of five Type 31e frigates (new generation frigates for the Royal Navy), with construction to commence in 2021. The multi-role Type 31e frigates are smaller and more cost effective than the Type 23 and will replace the remaining Type 23 frigates.

There are active shipyards in Leith, Grangemouth and Dundee. Dry Dock facilities throughout Scotland, including Aberdeen, Leith and Garvel and fishing fleet maintenance and engineering technical support facilities at Lerwick and Peterhead have significant potential for growth. There are also some dry dock, manufacture and maintenance facilities with potential for reinvigoration. For example, Peel Ports Dry Docks at Inchgreen and Hunterston (both Clyde) have potential for reinvigoration but are not currently in use.

In a 2019 report for Maritime UK (cebr, 2019), the authors defined the maritime sector in Scotland as encompassing Shipping, Ports, Marine and Maritime Business Services. They estimated the direct macroeconomic contribution to the Scottish and UK maritime sector economies through business turnover (£9.9 bn), Gross Value Added (GVA, £3.7 bn) and employment (41,000 jobs). This respectively equates to approximately 21% of turnover, 27% of GVA and 19% of employment directly supported by the UK-wide Maritime Sector in 2017.

Employees in the Scottish Maritime sector were found to be highly productive, the average job contributing £90,600 GVA in 2017, comparing favourably to UK’s average productivity of £54,330. The sector's direct GVA contribution in Scotland increased by 10% from 3.4 billion in 2010 to 3.7 billion in 2017 (cebr, 2019). It is not possible to attribute economic figures to any Scottish Marine Regions or local authorities.

Between 2008 and 2017, the GVA fluctuates (see Figure 3): more than doubling from 2008 to 2017 from £238 million to £572 million (adjusted to 2017 values). Employment increased from 6,900 to 7,700 workers. The irregular nature of the shipbuilding business means that particular caution should be exercised in looking at year-on-year changes for the sector. Changes in a small number of (large) companies can have a have a very marked effect, particularly on sectoral and local authority figures, from one year to the next. Instead, figures should be used to chart long-term trends.

A profile of the Scottish shipbuilding sector for 2017 (Scottish Government, 2019b) produced from Annual Business Survey statistics puts shipbuilding into context: 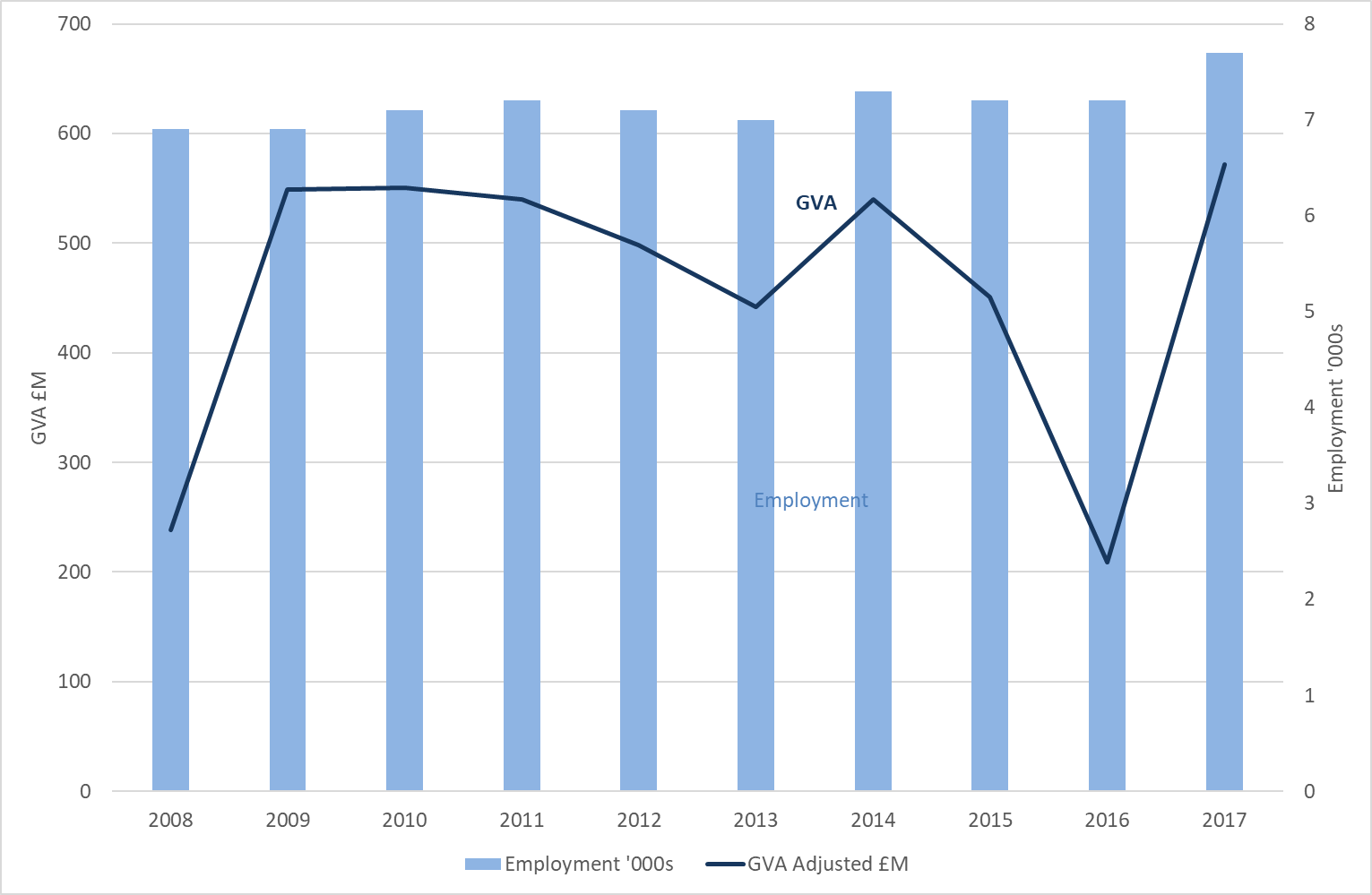