Coastal habitats occur where land and sea meet. They are readily accessible to many and provide ecosystem services such as protection against flooding and opportunities for coastal tourism. For example, dune ridges provide natural flood defence for the land uses behind them, from urban settings like Broughty Ferry in Angus to the internationally important golf at St Andrews, and saltmarshes reduce the height of waves and storm surges, helping to lower the risks of flooding and erosion in areas such as the north shore of the Solway Firth. Many species in these habitats play an important role in the uptake and storage of carbon from the atmosphere and sea. These habitats also provide a connection between land-based activities and the marine environment, linking what happens on land to the sea.

Coastal habitats (Figure 1) are already experiencing the effects of increased temperatures and sea-level rise (Burden, et al., 2020). In addition, human activities are squeezing coastal habitat from the landward side. Examples are historical flood embankments in our Firths that may prevent habitats expanding inland, and situations where beach/dune sand blown by storms onto golf courses or fields is placed back on the shore. These pressures have impacts now but also limit the potential of these habitats to adjust dynamically to climate change. Climate-related natural pressures, such as frequency and intensity of weather events such as storms and rainfall, will be likely to have an impact. Below, the impacts on saltmarsh, machair and sand dunes are summarised from Burden et al. (2020). 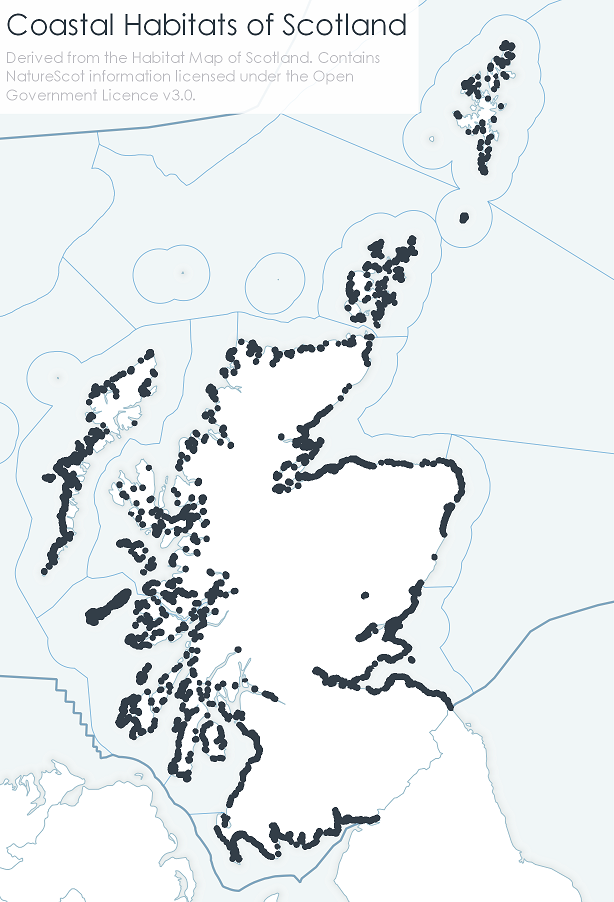 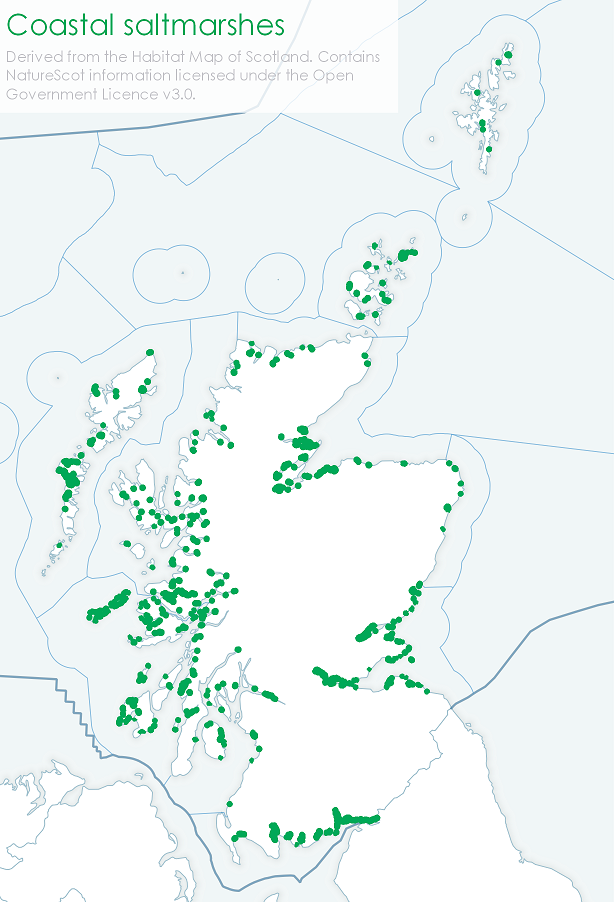 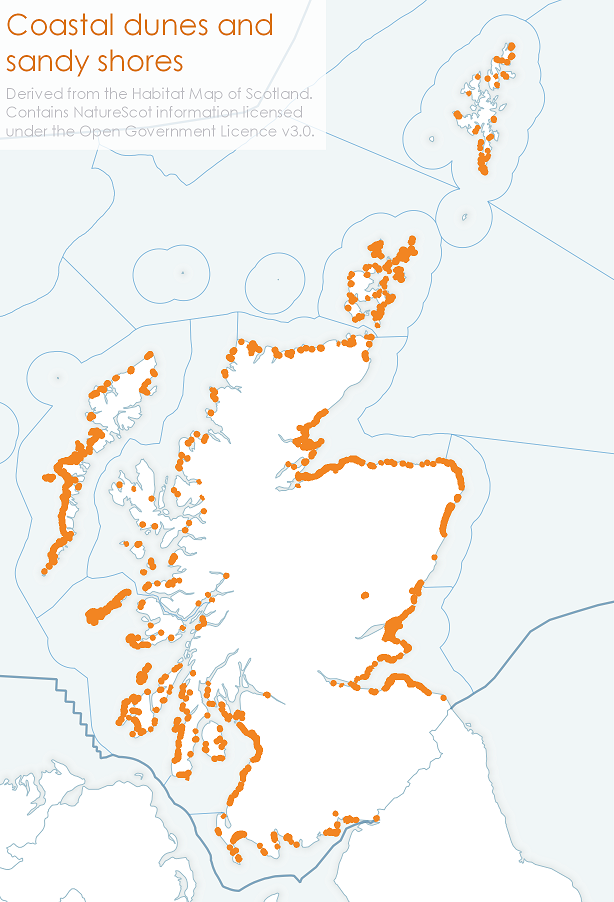 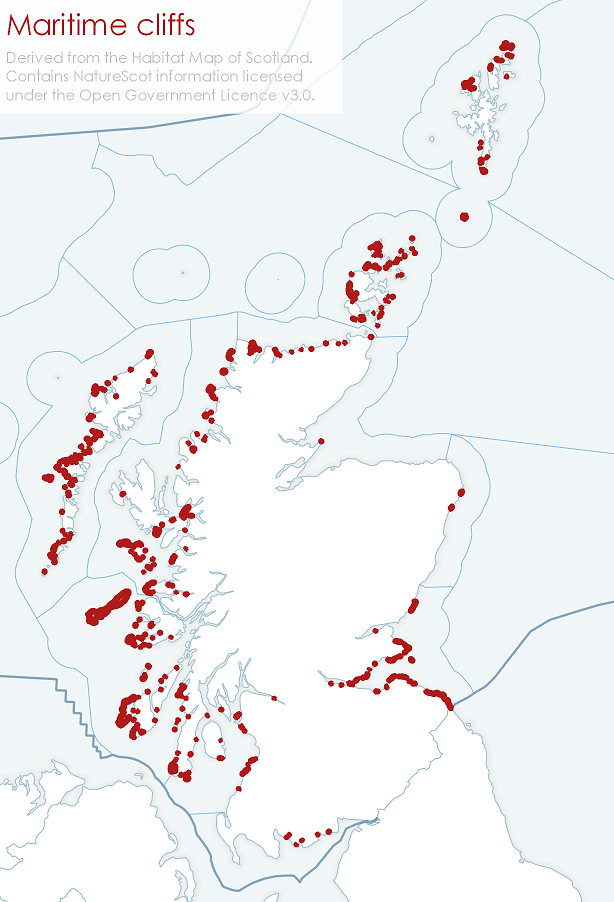 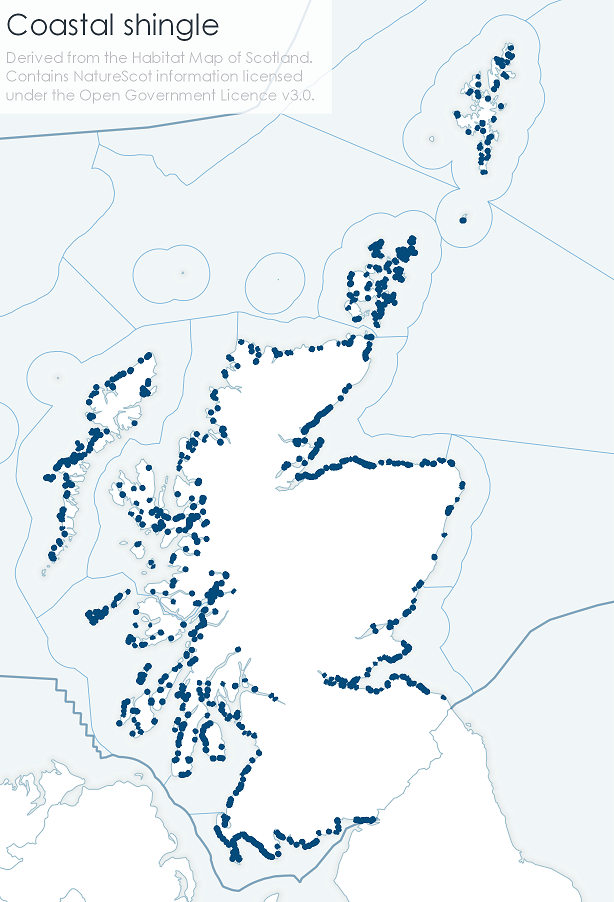 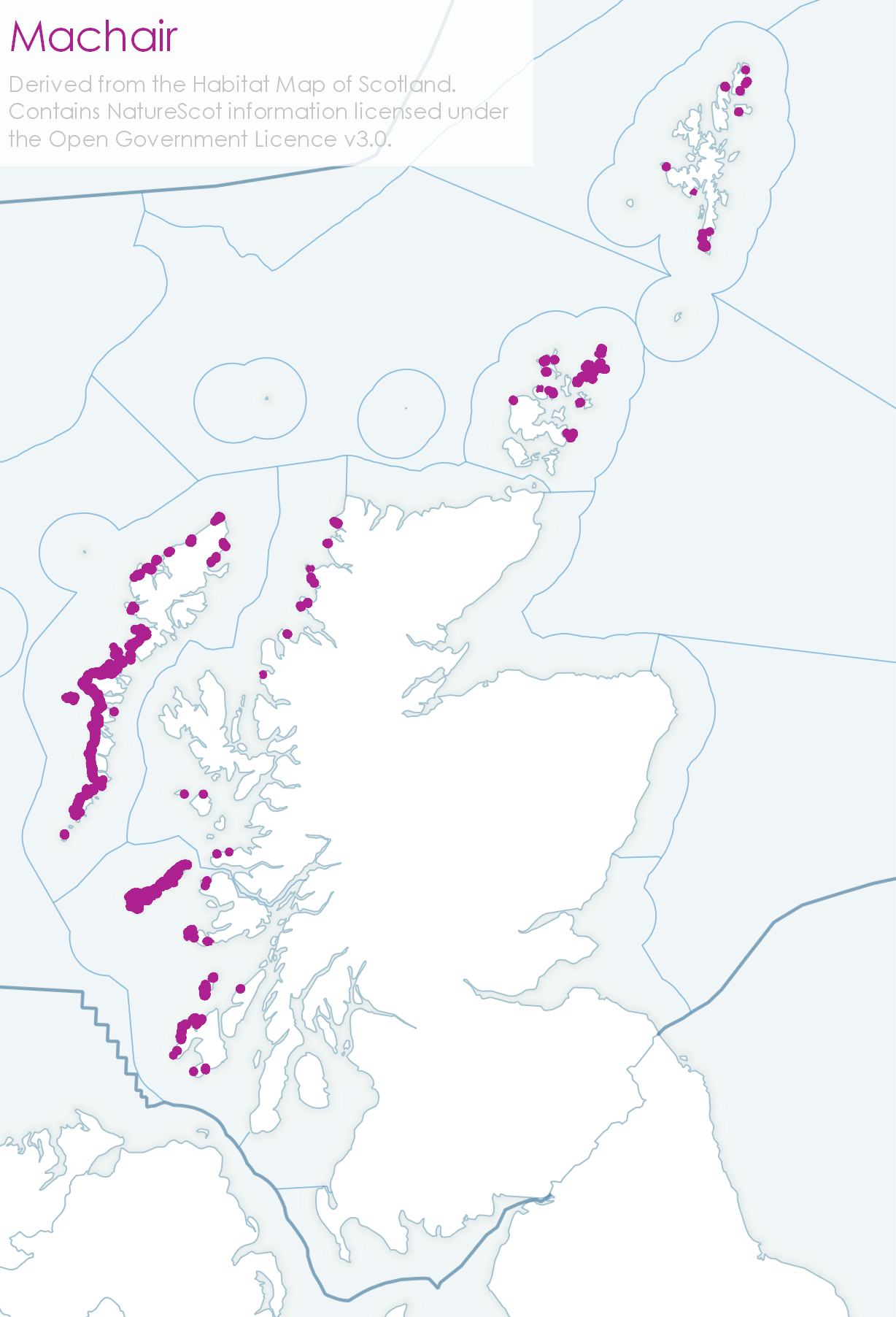 Figure 1: Location of coastal habitats in Scotland. Habitat data accessed from The Habitat Map of Scotland.

Around the UK, saltmarsh habitat losses have occurred due to drainage and reclamation for agriculture or other coastal development. Erosion due to sea-level rise has also been linked to reduction of salt marsh extent. These reductions in habitat have mainly occurred in the south-east of England.

Machair is a type of calcareous dune grassland that occurs in the north and west of Scotland (as well as the west of Ireland). The habitat is defined by its coastal topography, vegetation, climate, land use, herbivory and water table. Sea-level rise has already had an impact on the drainage of machair in Scotland, with the ‘head’ between inland waters and the sea reducing, as well as the duration when drainage is possible. Increasing precipitation and rising sea-level will likely increase the impact on machair drainage.

Coastal sand dunes form inland when wind-blown sand from the beach is colonised by vegetation. Several sites are afforded protection (as Sites of Special Scientific Interest, Special Areas of Conservation or National Nature Reserves) for their geomorphological and ecosystem conservation interest. Changes in sand dune habitats have been mainly attributed to progression through the dune formation phases or to management interventions, rather than climate change. Dune vegetation and dune species ranges have been apparently unaffected.

What is likely to happen in the future?

Under future climate conditions, many coastal habitats are forecast to decline in extent, although management interventions will likely be able to mitigate for some impacts (Burden et al., 2020). Impacts of coastal change will be felt in coastal communities which rely on this habitat for economic activities, but also on those areas relying on their natural protection against shoreline erosion and coastal flooding.

For exposed, low-lying dune-wetland habitat complexes such as are found in South Uist, Benbecula and North Uist in the Outer Hebrides the possibility of significant change to the coastal frontage has been identified. These coastal systems constitute a complex meta-ecosystem, in which connectivity is achieved mainly via water (including biota, sediment load and chemistry). The areas of machair and inland lochs in Benbecula and South Uist could be negatively affected by relative sea-level rise and discharging inland water, especially at times of high rainfall. These weather extremes will likely further raise sea level above the expected high water level due to the coincident storm surge and increased rainfall (Angus, 2018).

As sea-level rise accelerates, it will increasingly be the main climate change effect at the coast. The impacts in terms of coastal change are being investigated Scotland-wide by Dynamic Coast, Scotland’s national coastal change assessment.

In Dynamic Coast’s first phase, rates of erosion in recent decades were projected landwards to identify areas at future risk up to 2100 (Hansom, Fitton & Rennie, 2017). It was found that the significant areas of coastal habitat affected by erosional retreat would include many hundreds of hectares within designated sites. Detailed outputs (see Coastal erosion and flood risk management assessment and Climate change - Storms, waves and coastal erosion) are informing terrestrial and marine policy in topics such as planning, infrastructure, flood risk and heritage management. These outputs also inform NatureScot’s approach to coastal nature conservation, with less focus on maintaining specific habitat areas as they change and/or shrink, and more on maintaining the underlying ecosystem function. This approach incorporates the rationale that structure and function are essential attributes. Therefore, if functionality is maintained (i.e. protected from adverse anthropogenic impacts) then habitats and the species that live there will also be afforded protection. Occasionally additional species-based measures might also be required. An example of this approach is to allow a dune ridge to adjust naturally to rising sea level: its ability to protect the hinterland from marine inundation via breaches and overtopping would then also be maximised.

The second phase of Dynamic Coast focuses on identifying and anticipating coastal changes in more detail, to support resilience and adaptation to the predicted acceleration in sea-level rise. This involves numerical modelling that takes account of sea-level rise scenarios in the 2018 UK Climate Projections (UKCP18), and in certain locations takes account of wave-driven sediment transport. Emerging results show erosion continuing to both accelerate and expand along the coast during this century. They are being applied to key sites with particular infrastructure at risk, including the Neolithic World Heritage Site of Skara Brae on Orkney (Figure 2) and the historic golf course at Montrose Bay. During 2021, further results will become available to inform shoreline management planning and coastal adaptation strategies around Scotland. These will have to take account of transformative change to some semi-natural shorelines, significant maintenance challenges for existing built defences, and a longer-term need to consider relocating certain assets at risk. 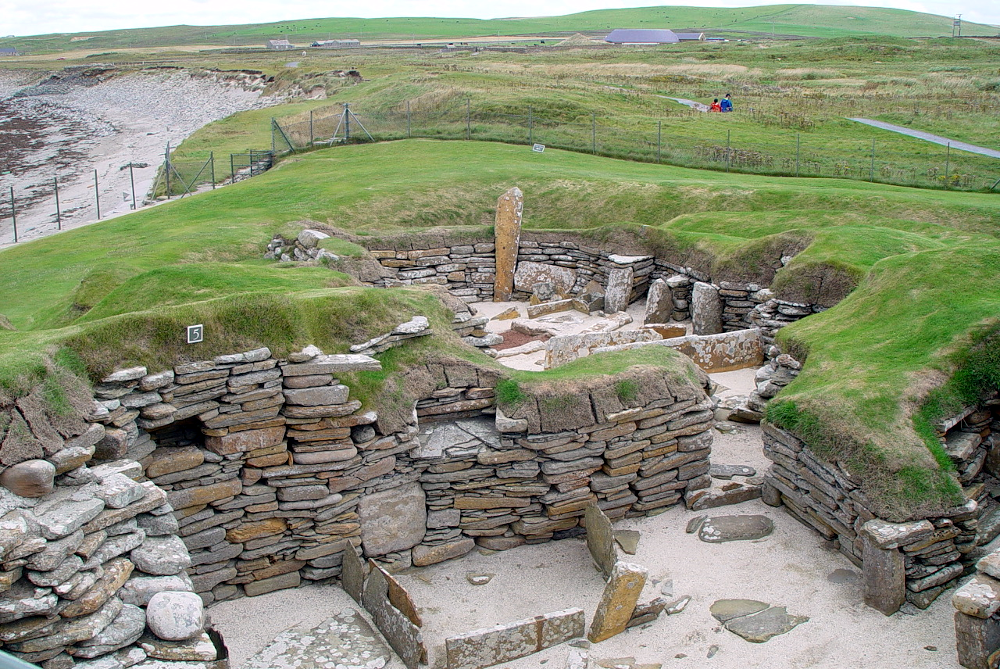