Dissolved oxygen concentrations are above levels required to maintain healthy marine ecosystems in all Scottish Marine Regions (SMRs) except the Clyde. As part of the Water Framework Directive (WFD) one water body in the Clyde SMR (Inner Clyde Estuary) was classified as being below good status for dissolved oxygen. Robust trend analysis is not possible. 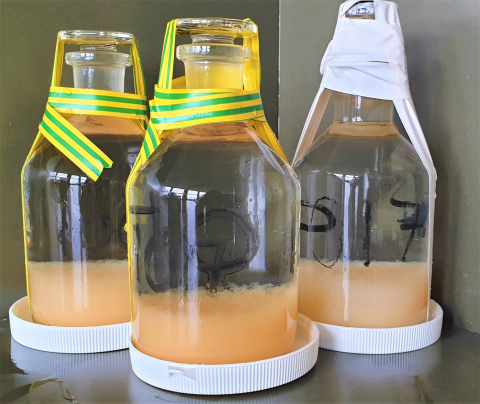 Eutrophication in the marine environment is the excessive growth of phytoplankton in response to enrichment by nutrients (nitrogen (N) and phosphorus (P)) resulting in an undesirable disturbance in the marine ecosystem. The consequences are often wide ranging, with overall impacts on the diversity and abundance of flora and fauna resulting from the depletion of oxygen in the water column, increases in water turbidity and behavioural changes in larger fauna.

Nitrogen and phosphorus can enter the sea from a number of natural and anthropogenic sources: direct discharges (e.g. sewage, aquaculture etc.), inputs from rivers, land runoff and atmospheric deposition.

The decomposition of excessive phytoplankton growth has the potential to lower the levels of dissolved oxygen (DO) in the water column. Above 6 mg l-1, DO concentrations are able to support healthy marine ecosystems, whereas when DO concentrations fall below 2 mg l-1 hypoxic conditions are created that have detrimental effects on marine life. In between these two thresholds there may be some sub-lethal and lethal impacts on sensitive species such as salmonids.

Dissolved oxygen levels can also be affected by changes in salinity and temperature. Increasing water temperatures, as a consequence of greenhouse gas emissions, may result in degassing and lower dissolved oxygen concentrations.

This indicator assesses the levels of DO within each of the Scottish Marine Regions (SMRs) and Offshore Marine Regions (OMRs) as an indirect indicator of nutrient enrichment. It is assessed in two different ways. Firstly, results from Water Framework Directive (WFD) water body classification are presented for transitional and coastal water bodies within SMRs. Secondly, seabed DO data collected offshore were assessed against OSPAR and the Marine Strategy Framework Directive (MSFD) assessment thresholds. 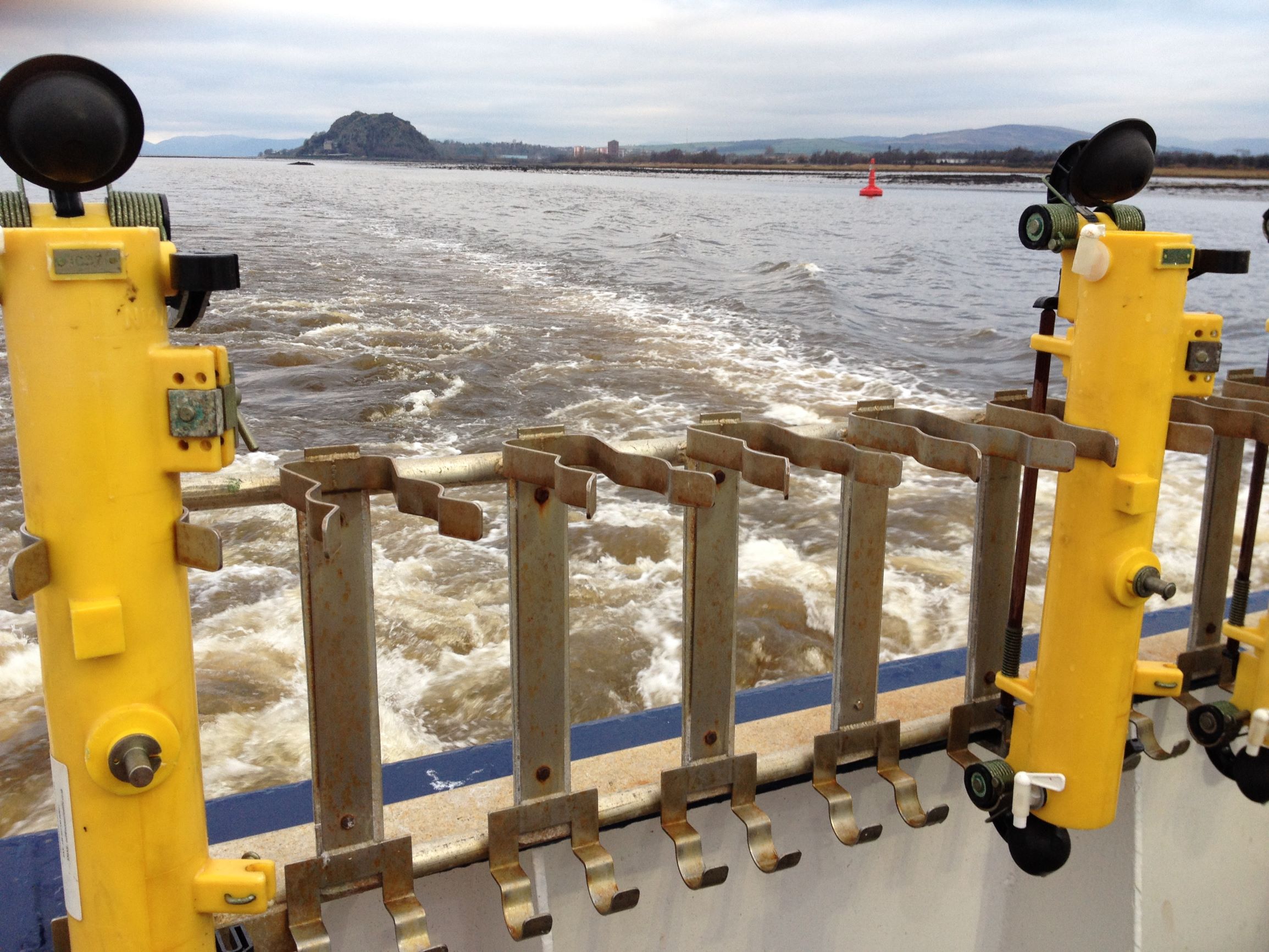 Figure 1: Water samplers used for taking samples in the Clyde estuary
back to top

Dissolved oxygen (DO) is essential for marine ecosystem functioning. The impacts of lowered oxygen levels range from avoidance by certain species, to an increase in abundance of low oxygen tolerant species and to the death of marine organisms. DO concentrations vary naturally with the seasons, particularly with seasonal stratification. However, there are a number of causes of unnatural depletion such as climate change and eutrophication that bring oxygen levels below those which support healthy ecosystem function (6 mg l-1). The exact cause of oxygen depletion can often be hard to disentangle.

Dissolved oxygen (DO) has been assessed using two different approaches depending on where data have been collected. Inshore and transitional waters fall under the EU Water Framework Directive (WFD) and were therefore assessed against WFD DO standards. Waters outside of WFD areas were assessed against the thresholds and processes outlined by OSPAR and MSFD. Both of these approaches are outlined in more detail below.

DO is used as a classification parameter for the EU Water Framework Directive. Standards have been derived for the classification bands: Bad, Poor, Moderate, Good and High at the UK level by the United Kingdom Technical Advisory Group (UKTAG) according to impacts on fish species. The DO standards are based on the 5th percentile DO concentrations in a waterbody collected over the duration of a year. The standards derived for the UK are shown in Table a as set out in the Scotland River Basin District (Standards) Directions 2014.

In waters where salinity is <34.5 (salinity ranges from around 0 to 35, from fresh to seawater), standards vary due to the relationship between oxygen solubility and salinity within this salinity range.

At the SMR scale the WFD data collected by the Scottish Environment Protection Agency (SEPA) were used to make an assessment of waterbodies within each SMR using the WFD classification approach.

It is important to note that SEPA does not collect WFD data in every waterbody. Data are collected throughout the year at a small subset of locations that are representative of groups of waterbodies of similar typologies. There are cases where the representative location of a waterbody sits within a different SMR to the waterbody being assessed.

These standards broadly align with thresholds set out in the OSPAR common procedure and MSFD, where near seafloor DO concentrations >6 mg l-1 are considered to have minimal impacts on marine life (comparable with the High WFD class band). Concentrations <2 mg l-1 are considered to cause severe problems (comparable to the Poor WFD class band). Average DO concentrations in the lowest quartile from samples collected within 10 m of the seabed at sites <500 m in depth are used in the OSPAR and MSFD assessments.

Data were filtered for the period 1st July to 31st October when the sea was more likely to be stratified (i.e. exhibiting layering caused by gradients in temperature and/or salinity that restrict mixing between surface and deeper water) and therefore DO concentrations lowest. Years with less than five data points within a region were removed from the analysis for robustness.

Data to be assessed against the OSPAR and MSFD thresholds were obtained from the International Council for the Exploration of the Seas (ICES) database from 1990 to 2017. Available data are shown in Figure b. Note – this is data availability before data points were removed from the analysis if there were less than five data points in a region per year 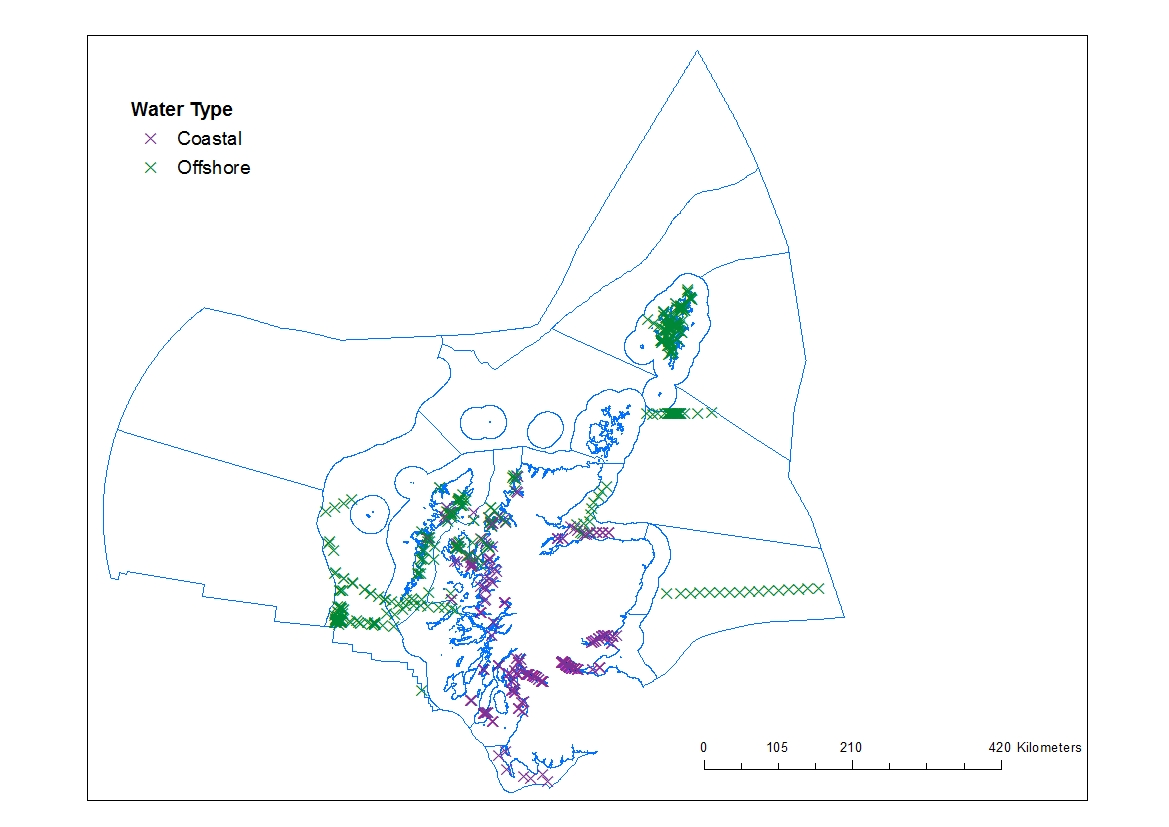 Data availability within each region for the decades assessed are shown in Table b.

In the latest WFD classification (2017) 499 of the 504 transitional and coastal water bodies classified were at a High status for DO. Of the remaining five waterbodies, four were classified as Good and one was Moderate (Inner Clyde Estuary). Waterbodies below High status are detailed in Table 1. The predominant cause of DO pressures in the Inner Clyde Estuary is from the decomposition of excess organic material released from municipal wastewater and diffuse pollution sources by microorganisms that use DO.

Seabed data assessed against OSPAR and MSFD thresholds presents a similar result. Figure 2 presents the DO data by decade for each SMR and OMR. All regions are above the assessment level of 6 mg l-1 in the decades where data were available, with the exception of the Clyde Coastal data which are below the assessment level but above what is considered to be hypoxic.

There are also a number of cases where the lowest values within the range of data used to undertake the assessment fall below the assessment threshold e.g. Forth & Tay, and West Highlands. Looking at the annual data (not shown), these appear to be related to sampling within a specific year (West Highlands, Outer Hebrides) or year to year fluctuations around the threshold level (Forth & Tay).

There are however a number of data gaps in all SMRs, with no SMR having a full complement of data for both water types across the three decades. 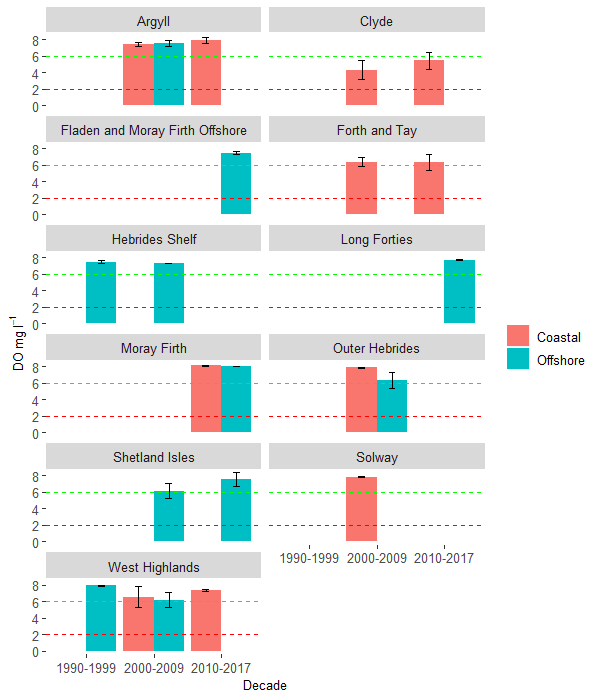 Figure 2: Average concentrations of DO (mg l-1, as average values in the lowest quartile of the data) near the seabed in each SMR and OMR, 1990-2017.

The green line shows the threshold value (6 mg l-1) used in assessments of status and red line shows the value (2 mg l-1) below which detrimental ecosystem impacts are likely. Black error bars demonstrate standard deviation. Note: Only SMRs and OMRs that meet the threshold for data availability are shown in the plot (minimum of 5 data points per year).

There were insufficient data in each region to be able to undertake robust trend assessment for near bed DO. For WFD water bodies there has been an increase in the number of waterbodies classified as High status from 476 in 2007 to 499 in 2018. However, only a small fraction of these waterbodies are sampled for DO as detailed in the assessment methods.

Previous studies have suggested increasing trends in hypoxic zones across the globe, including Scotland (e.g. Diaz & Rosenberg, 2008; Breitburg et al., 2018). However, the ‘hypoxic areas’ identified in Scotland from these two publications are from studies that date back to the 1970s and 1980s, and are reflective of localised episodic hypoxic events. Results from this current assessment, the MSFD assessment and the OSPAR intermediate assessment (OSPAR, 2017) show that regionally, seabed DO concentrations are above threshold levels in most regions.

In the last marine assessment (Baxter et al., 2011) only data from the Forth and the Clyde estuaries were presented as a trend analysis from 1970-2010. Both estuaries showed an improving trend in response to enhancements in municipal wastewater treatment that aimed to reduce loads of organic material in effluents. Although trend assessment was not possible at the SMR scale in this assessment, mean lower quartile DO in the Clyde was higher in the 2010-2017 period than in the preceding 2000-2010 period, suggesting a continued improvement.

Confidence in the data quality is high, both SEPA and Marine Scotland Science (MSS) laboratories conform to ISO 17025 and are UKAS accredited. Confidence in the assessment for many regions is, however, low due to poor data availability.

WFD assessments also show similar results, with only one waterbody (Inner Clyde Estuary) exhibiting DO concentrations below the minimum Good WFD threshold. Pressures within the Clyde are well understood and efforts are underway to reduce nutrient loading.

The relationship between biological and physical processes near the seafloor is poorly understood. Robust assessments of oxygen deficiency require improved availability of near-bed data on DO concentrations together with salinity, depth and temperature measurements.

Data on seabed DO are only collected consistently within a subset of the regions. At the SMR and OMR scale, this presents a number of data gaps as shown in the results. In addition, WFD classification is based on monitoring in representative locations meaning DO is not routinely monitored in all water bodies. It is hoped that autonomous monitoring methodologies such as those outlined in the AlterECO case study will provide more data in the future to improve our understanding seabed DO.

To better understand trends in dissolved oxygen in relation to climate change more data are required than those which are currently available. There may, therefore, be a requirement to expand the monitoring network to all regions to ensure long-term changes are captured.