Seaweed dominated ecosystems represent areas of high productivity and biodiversity. In Scotland seaweed beds are the most productive blue carbon habitat, fixing up to 1.73 Mt C yr-1. But seaweeds have, until recently, been omitted from some blue carbon reports mainly because carbon burial in seaweed habitats is precluded by a number of factors (Burrows et al., 2014; Howard et al., 2017). Recent interest in blue carbon habitats and their potential to help manage high levels of atmospheric CO2 (carbon dioxide) has given rise to multiple studies that show seaweeds may actually contribute to carbon storage by producing large amounts of detritus. While much work is still needed, it is now possible to challenge the precluding factors and also begin to estimate how much, and in what way, seaweeds can contribute to long-term carbon storage.

The inability to bury carbon in rocky areas is difficult to argue with, some studies have shown that seaweed detritus accumulates in cracks and crevices, especially in slate and pebble areas; but in-habitat burial is minimal and accounts for an average of 0.4% of seaweed Net Primary Production (NPP). In Scottish sea lochs, sediments are often adjacent to rocky areas, facilitating burial in the immediate vicinity of seaweed beds. Some macroalgae grow in soft sediments where it is thought that globally as much as 6.2 Tg C yr-1 can be buried (1Tg is equivalent to one million tonnes); some common green seaweeds grow in soft sediments in Scotland (Macreadie et al., 2019). While direct burial in-habitat is likely minimal, detrital production from seaweed beds is significant (average 43%, max 82% of NPP) which occurs regularly as part of the life cycle of some dominant canopy formers, by mechanical breakdown and grazing and after storm events (Figure 1). It is the fate of this detritus that is key to long-term carbon storage by seaweeds. With these large amounts of detrital production, seaweeds donate carbon to alternative routes of sequestration. But seaweed habitats themselves are not considered carbon sinks. Instead, seaweed habitats are now being considered as carbon donors. Through the production of detritus the carbon from seaweed can be sequestered via less direct pathways (Macreadie et al., 2019; Krumhansl & Scheibling, 2012; Krause-jensen & Duarte, 2016; Queirós et al., 2019).

Figure 1: From left to right: Lacuna vincta, Montagu a marine snail responsible for the production of a large amount of seaweed detritus; the common hermit crab grazing on Saccharina latissima detritus in Loch Creran; and the blue rayed limpet (Patella pellucida, Linnaeus) bores a hole in the stipe of Laminaria digitata in Loch Etive. © Alasdair O’Dell.

Seaweeds lack lignin (complex molecules that are key structural materials in woody plants) in their supporting structures and therefore the material within them is more easily remineralised (the breakdown of organic material to its simplest inorganic forms) than terrestrial material. However, there is a dissolved organic fraction of carbon (DOC) which is exuded constantly from both living seaweed and from seaweed detritus. If this carbon is transported to below the ‘carbon sequestration horizon’ (areas of 1,000 m or deeper) then it is stored for periods of time significant enough to be considered sequestered. Some biomarker studies have found certain compounds in seaweeds have properties that make them less labile and more refractory (resistant to being metabolised) than other components (Trevathan-Tackett et al., 2015). For example, the sulphated polysaccharide fucoidan has been shown to persist in sediments, and in dissolved form fucoidan is less available as a substrate for bacteria to consume (Barrón, Apostolaki, & Duarte, 2014; Barrón & Duarte, 2015; Keith & Arnosti, 2001). Carbohydrates and phenols (a type of organic compound) have also been used as biomarkers to show the seaweed contribution to sediment carbon (Abdullah, Fredriksen, & Christie, 2017).

Seaweed plays an integral part in near-shore (Renaud, Løkken, Jørgensen, Berge, & Johnson, 2015; Fredriksen, 2003), benthic (Norderhaug, Fredriksen, & Nygaard, 2003), and pelagic (Dunton, 2001); von Biela, Newsome, Bodkin, Kruse, & Zimmerman, 2016) food webs and supports a large variety of different kinds of organisms both directly and indirectly (Figure 2). Only a small fraction of live seaweed is consumed directly but faunal associations with detrital kelp in both pelagic and benthic areas are significant. Hotspots of biological diversity have been observed near accumulations of seaweed detritus (Duggins et al., 2016). The enhancement of secondary production is also being considered as a contributing factor in carbon storage. The production of faecal pellets by grazers like urchins may also contribute to nutrient recycling, energy flow and carbon storage in marine environments and sediments (Mamelona & Pelletier, 2005; Sauchyn & Scheibling, 2009; Sauchyn, Lauzon-Guay, & Scheibling, 2011). Contribution to sediment stores via distal parts of food chains has now been shown in eDNA and stable isotope mixed modelling (SIMM) analysis (Queirós, Stephens, & Widdicombe, 2019; Ortega et al., 2019). Furthermore, it has been suggested that blue carbon habitats be considered as interconnected instead of as individual, isolated systems. The various transfer methods of carbon through ecosystems are pathways to carbon sequestration which are also important to consider (Smale, Moore, Queirós, Higgs, & Burrows, 2018).

A review in 2016 found that total global carbon sequestration by seaweed can be estimated at 173 Mt C yr­-1 (61-268 as 25 to 75% quartile range) making up approximately 11.4% of global ocean NPP by seaweeds (Krause-Jensen & Duarte, 2016). To date, studies of seaweed-derived carbon in sediments are limited. However, a recent UK study found that, on average, the rate of net organic carbon sequestration coming from seaweed was 8.75 g C m­2 yr-1 out of a total particulate carbon sequestration of 58.74 g C m­­-2 yr-1 in sediments at a specific site (Queirós et al., 2019). Metagenome studies (the analysis of all genetic material extracted from an environmental sample) found seaweed DNA as far as 5,000 km from coastal areas (Ortega et al., 2019). The discovery of seaweed DNA in sediments shows their contribution, but before total carbon quantification can be asserted, ratios of carbon and DNA content per species need to be verified and biomarker studies need to be refined. There are several factors that impact the annual production of seaweeds, and additionally the production of detritus. Combined with the limited evidence showing the fate of seaweed detritus, detritus breakdown and sedimentation, these factors mean that cited figures are often uncertain or presented with large ranges or confidence levels. Scottish seaweed NPP has been estimated at 1.73 Mt C yr-1 by Burrows et al. (2014). Applying the findings of the 2016 analysis to this estimate (Figure 3) it can be tentatively suggested that total carbon sequestration by seaweed in Scotland is also on average 11.4% of NPP at 0.2 Mt C yr-1 (0.07 – 0.30 as 25 to 75% quartile range). There remains a high degree of uncertainty around carbon storage by seaweeds. An increased level of understanding and more studies focused on seaweed breakdown and sediment contribution will mean findings can be presented with greater confidence. 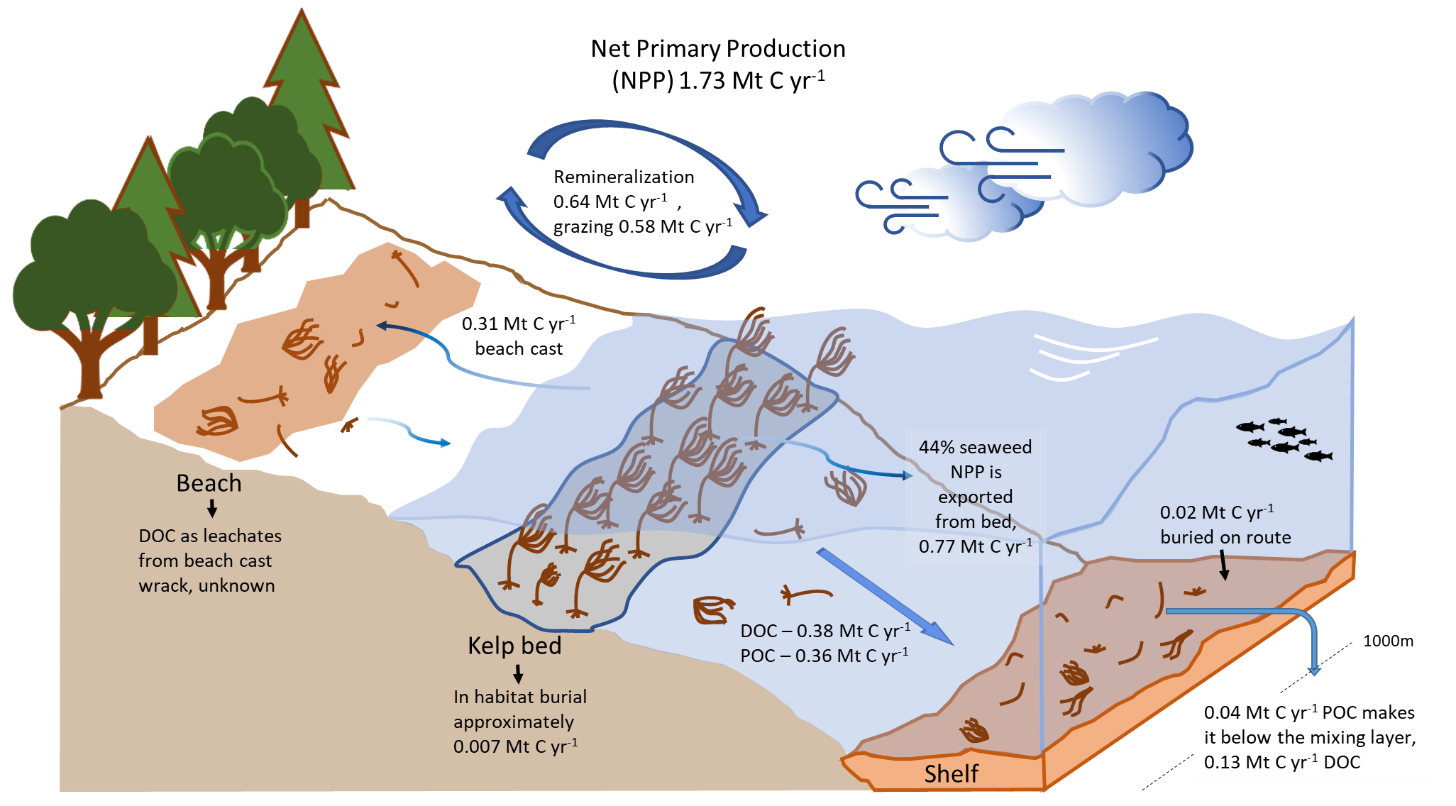 Figure 3: A recent review by Krause-Jensen and Duarte (2016) highlighted the fate of detritus from macroalgae. By analysing existing literature, the authors derived figures to apply to the various pathways on a global scale. Here, the findings in this global model have been applied to a Scottish estimate of seaweed annual production (1.73 Mt C yr­-1 see Burrows et al. (2014)). Uncertainty exists between grazing and remineralisation where there is likely some overlap.

The production of detritus by seaweed forests is key to the storage of carbon. The fate of this detritus is governed by grazing organisms, water movement, bacterial decomposition and the potential for burial in adjacent sediments. A rough estimate of how much carbon can be stored based on existing literature can be provided but there are still uncertainties (Table 1).

The future of blue carbon from seaweed depends on a greater understanding of three important aspects: 1) improving methods for assessing standing stock of carbon and annual production in seaweed forests; 2) the annual production of seaweed detritus, and the predicted change and habitat alteration in relation to increased storm surge and other aspects of climate change; and 3) a clearer and more accurate understanding of the fate of this detritus regarding re-mineralisation, burial, transportation and long term storage of the carbon within it.