The outputs of the work to identify where riparian woodland can be most effective are illustrated as three layers on Marine Scotland Maps NMPi:

Details of the modelling work that produced these layers can be found in two associated peer-reviewed publications (see links under 'Additional Information' Tab). Model outputs are presented on river line features derived from a Digital Rivers Network licensed from the Centre for Ecology and Hydrology (CEH). 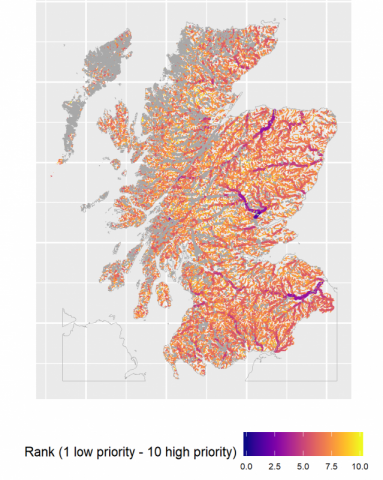 National shading prioritisation where both banks can be planted
More Information:

The effects of riparian woodland on the receipt of solar radiation depends on complex interactions between channel width, orientation, aspect, gradient, tree height and solar geometry.  Subsequent effects on river temperature are strongly influenced by water volume and residence time which can be broadly characterised by river order.

This study developed a simplified river temperature model, driven by energy gains from solar radiation, modified by coarse scale characterisation of hydrological and hydraulic conditions. The resulting output is a planting prioritisation metric that can be mapped at large spatial scales using information obtained from a digital river network to facilitate management decisions. The results indicate that hydrology (water volume) and hydraulics (residence time), as represented by river order, are a dominant control on the effectiveness of riparian woodland in reducing river temperature. Ignoring these controls can result in a sub-optimal prioritisation process and inappropriate allocation of resources. Within river order, the effectiveness of riparian shading depends on complex interactions between channel and landscape characteristics.

To create the prioritisation layer, temperature differences (between no trees and tree scenarios) were log transformed, given the skewed nature of the data, and re-scaled between zero (low priority) and ten (high priority).

Very small rivers (Strahler first order rivers on the CEH digital river network) were removed from this dataset. NAs exist where we are unable to make predictions of planting potential e.g. locations in lochs or in circumstances where we cannot generate the required prediction variables.