The circulation in Scottish waters is strongly influenced by the ocean circulation of the adjacent Atlantic Ocean. The circulation changes due to a number of processes, including the tide, atmospheric conditions (wind and sea level pressure), seasonal heat input, changes in freshwater run-off, and variability in the North Atlantic Ocean. 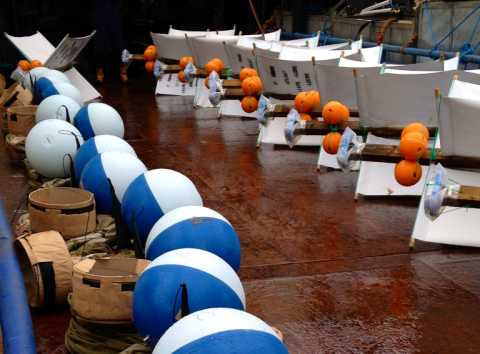 The circulation around the Scottish coast is strongly affected by conditions and the ocean circulation of the adjacent Atlantic Ocean (Figure 1). The steep bathymetry of the continental slope acts as a barrier between the open ocean and shelf sea systems. Mixing processes between oceanic and shelf sea waters are complex and have a significant impact on conditions in Scottish waters. 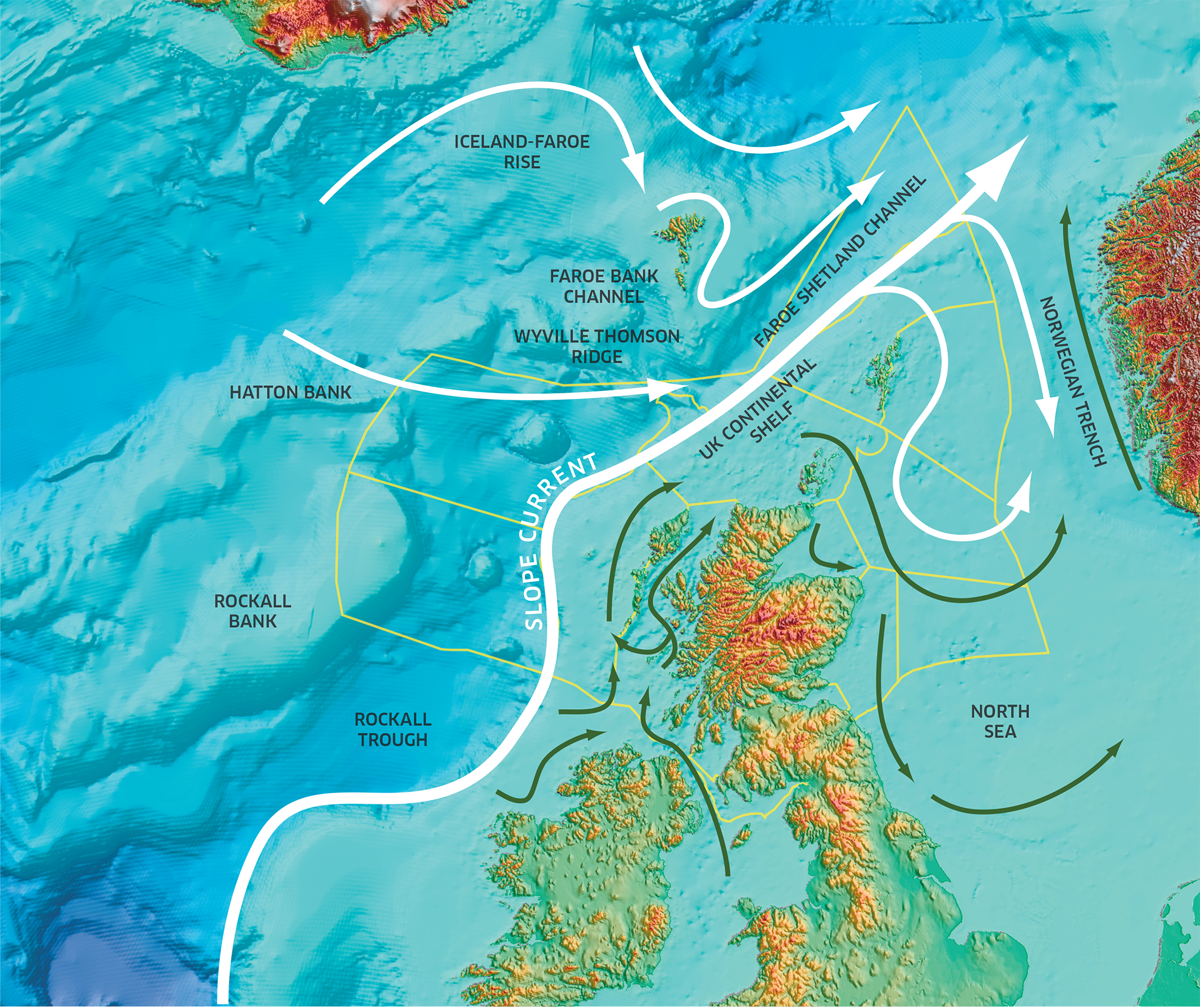 Along the west coast, the influence of the land run-off from the estuaries and sea lochs significantly reduces the salinity close to the land, and thus impacts the circulation locally (Figure 1). In the northern North Sea, the Atlantic waters enter between Orkney and Shetland, around the north-east of Shetland, and through the Norwegian Trench (Figure 1). Along Scotland’s east coast, these Atlantic water inflows in the northern North Sea, together with the influence of the Scottish Coastal Current, coming round from the west coast, set conditions and circulation close to the Scottish coast.

Several localised areas experience very strong tidal currents; these include the area between Orkney and Shetland, the Pentland Firth, off the Mull of Kintyre and Hebrides.

Knowledge of the ocean circulation is derived from a combination of centuries of observation-based oceanography and more recently the analysis of computer simulations of the ocean’s dynamics.

Tidal currents drive mixing in the water column, and therefore determine the location and extent to which the water column is stratified in distinct layers, especially in summer-time. At the transition between mixed and stratified waters, fronts occur which can have strong jet-like currents running parallel to them.

Although tidal currents can be much stronger, their net effect is in general quite small, as the tides move water back and forth with little net change in displacement. The non-tidal currents are strongly affected by winds and water density. These processes can lead to large changes in these currents, and even a reversal of general patterns for short periods.

Direct observations of the ocean circulation are often focused on specific areas for short periods of time. Some long-term observations do exist, and they are key to improving our understanding of the ocean processes and their variability.

This assessment consists of a general description of the average currents in Scottish waters (also referred to as residual currents), and the main tidal currents (semi-diurnal lunar constituent). This is based on model data from the Scottish Shelf Model Climatology from De Dominicis et al. (2018).

The assessment of the Atlantic water inflow through the Faroe-Shetland Channel (FSC) was made based on updated time series using satellite altimetry from Berx et al. (2013).

For the observational time series, the assessment also features a description of variability in recent years.

The assessment is entirely based on expert judgement and review of available data.

Tidal currents are driven by the tide generating forces due to the moon and the sun, which vary with different periods (constituents) due to different factors. These tidal constituents can be considered waves traveling through the ocean. Once they interact with large changes in the bathymetry, the tide is amplified (Figure 2). Tidal currents are also amplified in narrow passages, such as between the Scottish mainland and Orkney, and around headlands, such as the North East (Figure 2). In general, there is little to no net displacement of water due to tidal currents. 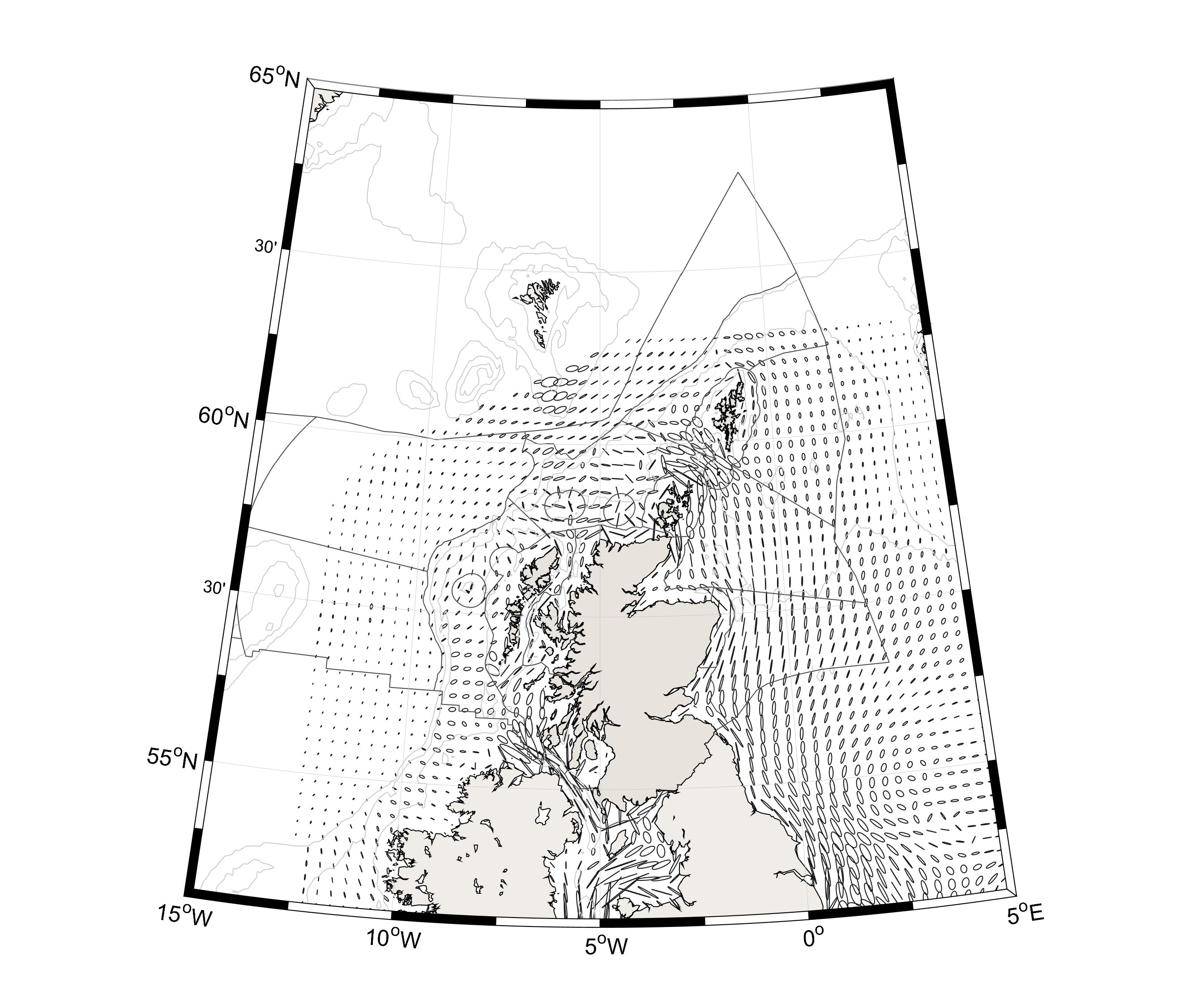 Figure 2: The tidal currents from the principal lunar tide (M2) from the Scottish Shelf Model (De Dominicis et al., 2018). The currents are shown as tidal ellipses: this can be considered the trace of the tip of the current vector as it rotates through the tidal cycle. The ellipse’s semi-major axis shows the main tidal current direction.

On average, the ocean currents around Scotland flow in a clockwise direction around the coast (Figure 3). 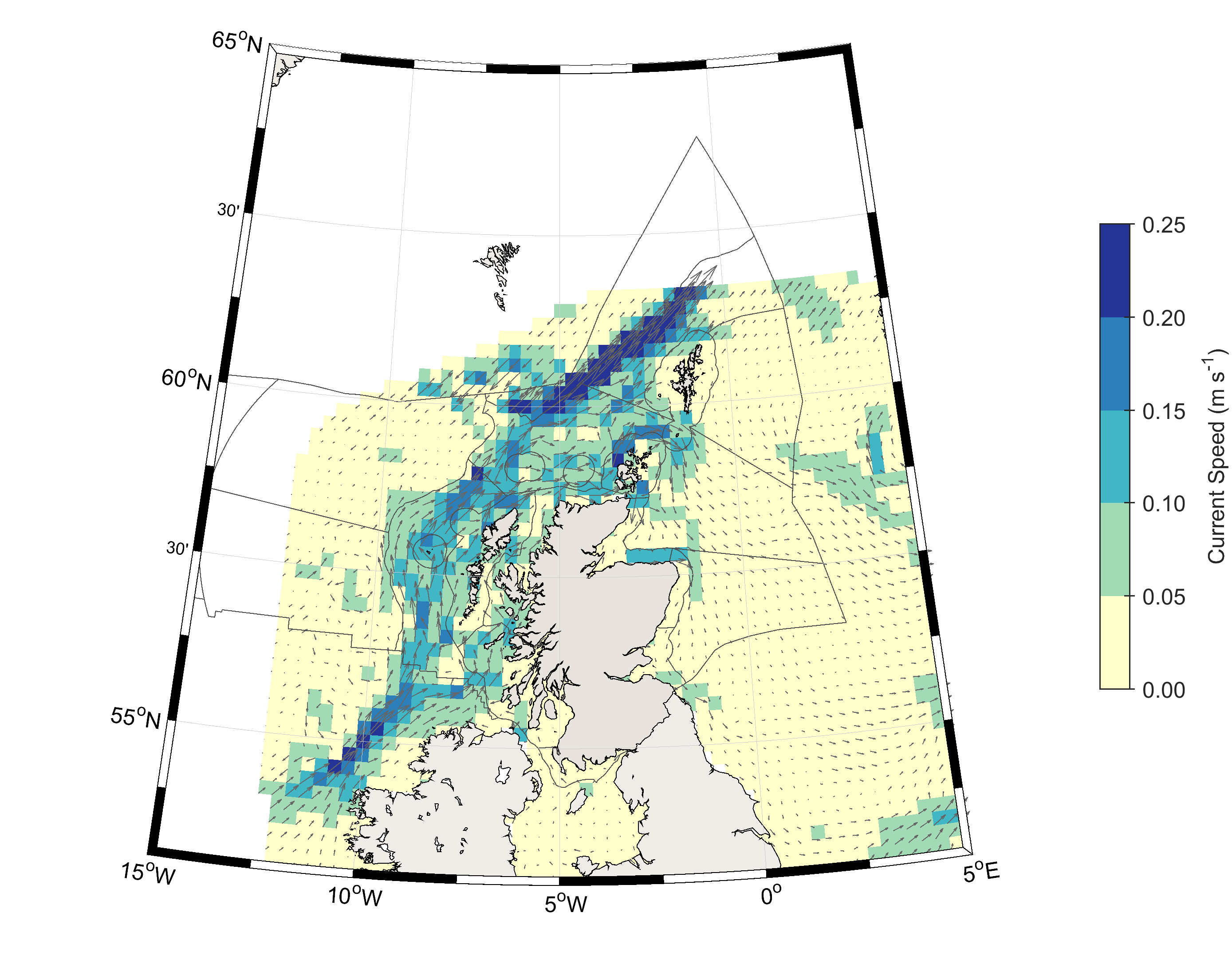 In regions close to the Atlantic Ocean and those where Atlantic-origin water masses are found (such as the northern North Sea), currents are influenced by those in the adjacent North Atlantic Ocean. Along the edge of the continental shelf (the region shallower than 200 m), the European Slope Current transports warm and salty Atlantic water northwards (along the boundaries between the deeper Rockall, Bailey and Faroe-Shetland Channel Offshore Marine Regions (OMRs) and the Hebrides, North Scotland and North & West Shetland Shelf OMRs). The steep bathymetry limits mixing between the oceanic and more coastal water masses present on the continental shelf.

The Faroe-Shetland Channel (FSC) is one of three regions where exchange between the Atlantic Ocean and Arctic Ocean (via the Norwegian and Greenland Seas) occurs.

The time series of Atlantic Water transport in the FSC (Figure 4) shows a clear seasonal signal, and no statistically significant trend (Berx et al., 2013). Although the transport is not changing, the heat and salt content are, and this will have implications for conditions in the Arctic Ocean, as more heat and salt are brought northwards. 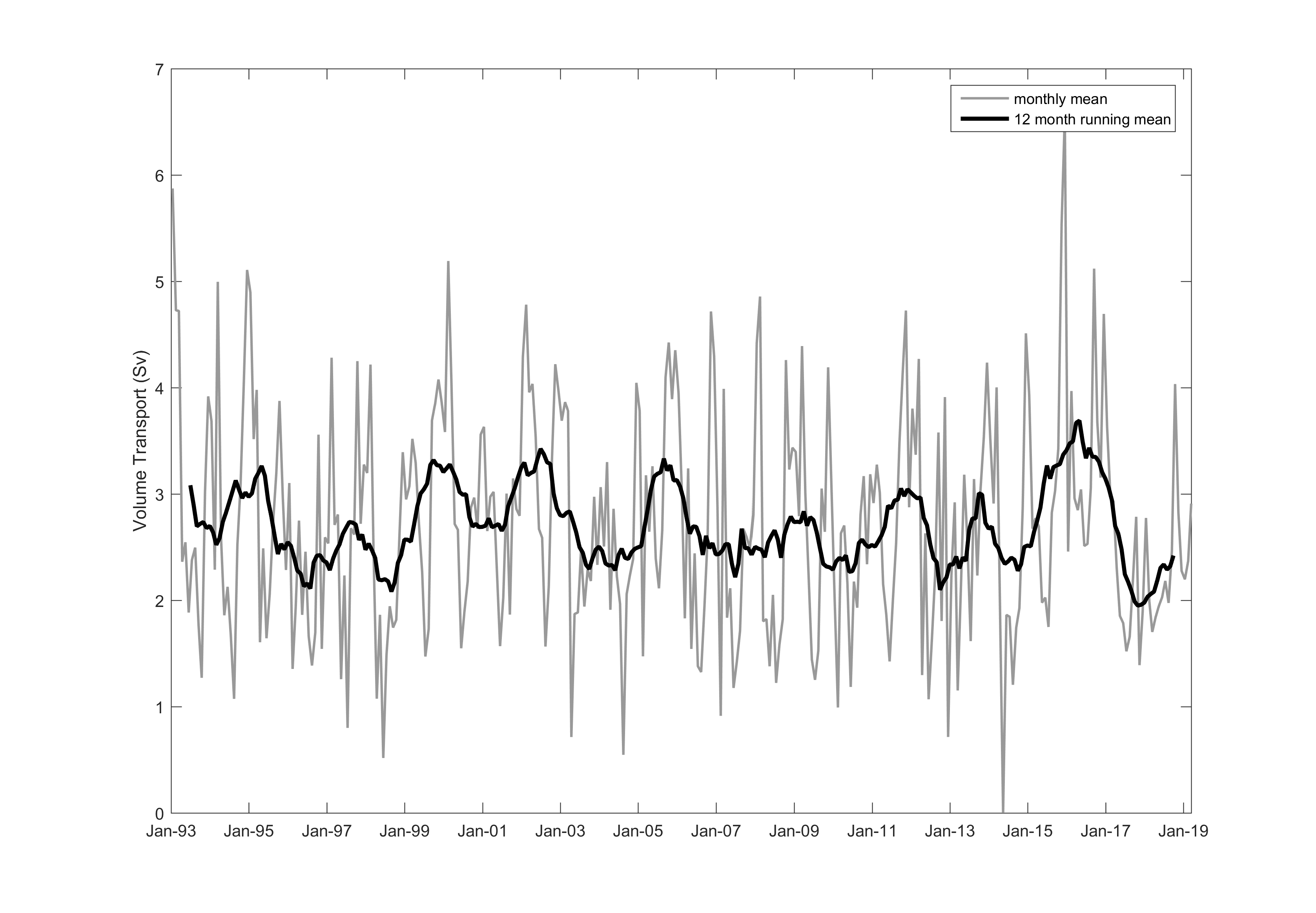 The coastal circulation around the coast and in the North Sea will show considerable variation through the seasons in both the strength and position of the currents. This is due to the influence of atmospheric conditions and due to narrow, relatively fast-moving currents (jets) associated with seasonal mixing fronts.

On the west coast, there is also a significant freshwater contribution from the land-run off via the large number of sea lochs and several large estuaries (particularly in the Clyde, Argyll, Outer Hebrides and West Highlands Scottish Marine Regions). Their contribution reduces the salinity of the Scottish Coastal Current.

The northern North Sea circulation is influenced by the inflows of Atlantic water to the region via three main pathways: between the Orkney and Shetland Islands (North Scotland Shelf and Fladen & Moray Firth Offshore OMRs), east of Shetland (East Shetland Shelf OMR) and along the edge of the Norwegian Trench. These currents form an anti-clockwise (cyclonic) circulation around the shelf sea, with most of the outflow occurring via the Norwegian Trench. At the southern end of the North Sea, a small inflow via the English Channel also occurs.

For example, the main lunar tide has a period of approximately 12 hours and 25 minutes, due to the orbit of the moon and Earth around their common centre of gravity.

The amplification of the tidal currents when there is a sharp change in bathymetry can be seen to the west of Scotland, where tidal currents are relatively small in regions such as Hatton, Rockall and Bailey, but become much larger on the shallower shelf sea regions of the neighbouring Hebrides Shelf (Figure 2).

The Atlantic current that flows through the Faroe-Shetland Channel (FSC) will eventually reach the Arctic Ocean where it will be modified by mixing with freshwater run off, and lose its heat to the atmosphere. It will then sink and become the lower limb of the Atlantic Meridional Overturning Circulation.

In the Faroe-Shetland Channel, Marine Scotland Science – in collaboration with Faroese and Norwegian scientists – has maintained a monitoring array of profiling current meters since 1994, complementing hydrographic monitoring since the late 19th century. These have measured the main transport of Atlantic water between the Atlantic Ocean and the Nordic Seas. This Atlantic current will eventually reach the Arctic Ocean where it will be modified by mixing with freshwater run off, and lose its heat to the atmosphere. It will then sink and become the lower limb of the Atlantic Meridional Overturning Circulation. The Faroe-Shetland Channel is one of three regions where exchange between the Atlantic Ocean and Arctic Ocean (via the Norwegian and Greenland Seas) occurs.

Within oceanography, the sea surface height difference across currents can provide information on the current speed. In the FSC, the current meter observations are used to validate this relationship (Berx et al., 2013). This means the transport of Atlantic water in the FSC can be estimated from the sea surface height difference across the channel as observed by satellite altimeter.

The circulation in the shallow (less than 200 m) regions of Scottish waters varies seasonally, as it is strongly influenced by the atmospheric conditions (sea level pressure and winds) and by narrow, relatively fast-moving currents (jets) that are associated with seasonal mixing fronts (the transition area between where the water column is vertically mixed throughout the year and where the water column seasonally stratifies).

Observing the overturning circulation in the Subpolar North Atlantic (OSNAP)

The currents in the deeper regions of the Rockall, Bailey and Hatton Offshore Marine Regions are important parts of the wider North Atlantic Ocean circulation. Since summer 2014, a new observing system has measured the Atlantic Meridional Overturning Circulation (AMOC) in the Subpolar North Atlantic Ocean (OSNAP, Overturning in the Subpolar North Atlantic Program). The in situ array measures circulation, heat and freshwater fluxes between Canada & Greenland (OSNAP West line) and Greenland & Scotland (OSNAP East line, Figure a), and relies on the collaborative efforts from US, UK, German, Dutch, Canadian and Chinese organisations. In addition to the more traditional ship-based and moored observational techniques, the program also relies on novel technologies such as acoustically tracked floats and ocean gliders. 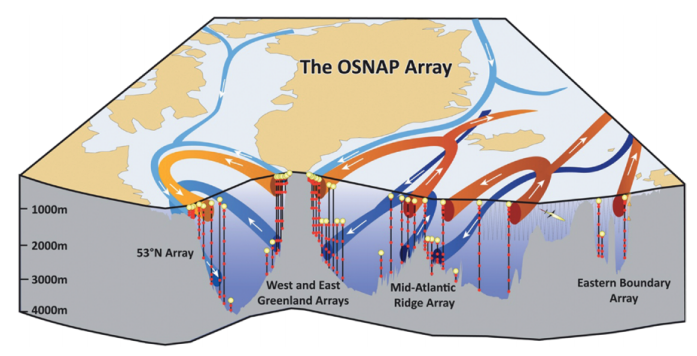 The OSNAP array covers a region where both the Subpolar Gyre circulation and the overturning circulation can be observed. The Intergovernmental Panel on Climate Change (IPCC) projections predict a slowing of the AMOC in the 21st century and the OSNAP array will be able to provide observational evidence of such changes.

The general pattern of ocean currents and tidal currents in Scottish waters is well understood and has been described here. In general, currents transport water masses in a clockwise direction around the Scottish coast. The circulation is influenced strongly by conditions in the adjacent North Atlantic Ocean.  Measurements of Atlantic Water transport in the Faroe-Shetland Channel show seasonal variability but no long term trend since 1993, although water mass characteristics are changing.

An assessment of the variability of currents is more difficult as direct observations are limited in space and time. Sustained observations of currents through in situ and remote sensing platforms are key, in addition to the integration of data outputs from validated computer simulations.

The general circulation in Scottish waters is well understood. The main evidence gaps are sustained and high-resolution direct observations of currents in Scottish waters, particularly the exchange in the northern North Sea. There are new data products (e.g. from remote sensing and numerical models) and new (e.g. autonomous) technologies under development which could fill this data gap.

The Overturning circulation in the Subpolar North Atlantic (OSNAP) programme is expanding the knowledge of the Atlantic Meridional Overturning Circulation and therefore the variability of Atlantic water in the Rockall, Bailey and Hatton regions, but more work is needed on the drivers of circulation variability, particularly in light of climate change.