The deep sea is defined as the region extending beyond the continental shelf edge, where water depths rapidly change from water shallower than 200 metres to depths in excess of 2,000 m. The Bailey, Rockall, Hatton and Faroe-Shetland Channel Offshore Marine Regions (OMRs) make up Scotland’s deep-sea area and include diverse geological features such as submarine ridges, banks, seamounts and expanses of soft sediments and sand waves (Gordon et al., 2016).

Extensive mapping, habitat survey campaigns and syntheses by industry, governments, academia and fisheries management and advisory organisations over the last three decades have greatly added to knowledge about distribution and diversity of benthic ecosystems in these regions. They have also helped to reveal that the overlying water column and pelagic ecosystems are no less important for resident and transient species across the size spectrum, from zooplankton and cephalopods, to fish including vulnerable species of sharks, skates and rays, and marine mammals. Indeed, in some regions such as around Rockall Bank and the Faroe-Shetland Channel, it is likely that benthic and pelagic ecosystems are tightly coupled, due to the interactions between hydrography and seafloor topography.

Deep-sea habitats include those constructed by reef framework-forming cold-water corals (Lophelia pertusa and Solenosmilia variabilis), sponges and sea pens. In some cases, they may be classified as vulnerable marine ecosystems (VMEs) (see Case study: Deep sea vulnerable marine ecosystems) according to the International Guidelines for the Management of Deep-Sea Fisheries in the High Seas developed by the Food and Agriculture Organization of the United Nations in 2008. In recent years, many of these VME indicator taxa have been afforded protection through fisheries legislation such as the EU Regulation 2016/2336, and in accordance with United Nations General Assembly Resolution 61/105. The latter specifically called for actions by Regional Fisheries Management Organisations or Arrangements (RFMO/As) with the competence to regulate bottom fisheries to take actions by the end of 2008 to address issues relating to deep-sea fisheries and VMEs. To some extent, the protection and conservation of these marine taxa has also been afforded through the designation of Marine Protected Areas (MPAs) (see Marine Protected Areas assessment), while under the Convention on Biological Diversity (CBD), parts of Scotland’s deep sea region including Rockall and Hatton Banks have been considered as part of the CBD’s Ecologically or Biologically Significant marine Areas (EBSA) process too, though none have been formally designated in Scottish waters just yet. 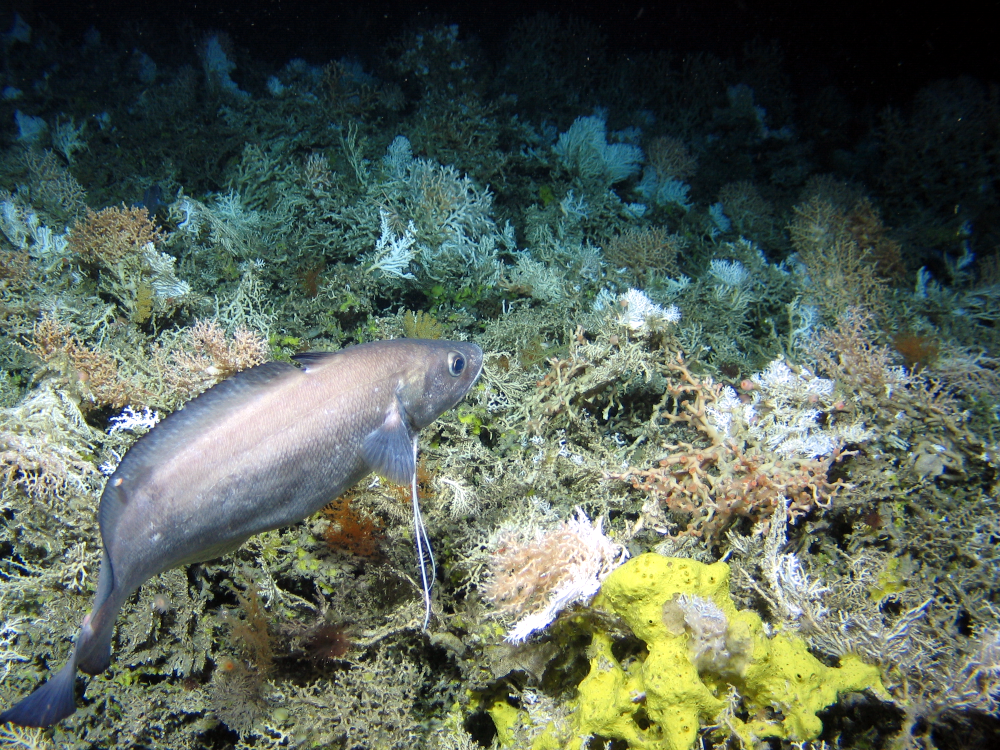 Deep-sea habitats in Scotland’s marine regions provide many valuable ecosystem services (see Natural capital, ecosystem services and the Blue Economy Deep sea habitats). In terms of supporting services, Scotland’s seamounts and banks are known to provide refuge, nursery and feeding grounds for species that were once commercially valuable and now in decline due to over-fishing such as orange roughy (Hoplostethus atlanticus). They are also important to species of conservation interest such as deep-sea skate (Bathyraja richardsoni) that use the Hebrides Terrace Seamount to deposit eggs (Henry et al., 2016). Meanwhile, the entire West of Scotland MPA (designated in 2020) is particularly important for safeguarding OSPAR-listed sharks such as the leafscale gulper shark (Centrophorus squamosus), gulper shark (C. granulosus), and Portuguese dogfish (Centroscymnus coelolepis; OSPAR Agreement 2008/6). Other supporting services are also provided by Scotland’s deep-sea regions, including biogeochemical cycling and carbon storage and sequestration either in seafloor sediments or in the skeletons of the marine fauna themselves (blue carbon). In terms of provisioning services, Scotland’s deep-sea regions are important commercial fishing grounds for pelagic and demersal fleets, and increasingly hydrocarbon exploration is moving deeper and further offshore into the Atlantic Frontier. Regulating services provided by Scotland’s deep-sea regions includes the capacity to regulate climate, e.g. through eddy formation and isopycnal doming. Oceanographic processes bring deeper water masses closer to the surface, altering rates of ocean ventilation, deep convection and ice formation (de Steur et al., 2007), and eddies which are important features at both Anton Dohrn and Rosemary Bank Seamounts (Booth & Meldrum 1987; Burrows & Thorpe 1999).

What is happening already?

Besides fisheries stock assessments and benthic Station M in the Rockall Trough that was first sampled in 1973, sustained observations of deep-sea communities are lacking. It is therefore difficult to document the extent of natural variability in these habitats over ecological timescales, as well as any changes due to anthropogenic climate change. Over geological timescales, abrupt changes in climate and paleo-oceanographic conditions since the last glacial maximum have significantly impacted Scotland’s deep-sea marine ecosystems, including those built by the reef framework-forming coral Lophelia pertusa at Rockall, the Darwin Mounds and in the inshore deep setting of the Mingulay Reef Complex (Henry et al., 2014; Douarin et al., 2016; Victorero et al., 2016) where ecosystems have waxed and waned over millennia in relation to ice scour, food supply and larval supply.

Contemporary relationships over ecological timescales between deep-sea ecosystem structure in Scotland’s deep-sea regions are known to be linked to properties and processes in the overlying water column, and in particular by water temperature, dissolved oxygen concentration, acidity of the seawater (pH), hydrographic features such as internal waves and the primary production in the surface waters (Jeffreys, Robson, & Narayanaswamy, 2020). For example, heterogeneity in seamount communities on the Hebrides Terrace are driven by water mass properties such as oxygen, aragonite saturation and temperature (Henry et al., 2014). Distribution and diversity of deep-sea sponge communities in the Faroe-Shetland Channel are also very much driven by variations in bottom water temperature (Vad et al., 2020) with greatest sponge diversity and abundance at depths that coincide with internal waves (Kazanidis et al., 2019). Nutrient concentrations such as silica could also play in important role in the distribution of deep-sea sponges (as their skeleton is, in most species, silica-based). However, silicate concentration in the North Atlantic, including in the Faroe-Shetland Channel has decreased since 1990 (Hátún et al., 2017) which could limit sponge growth (Kazanidis et al., 2019). Macrofauna generally also show close relationships with properties and processes, for example in the Faroe-Shetland Channel (Narayanaswamy & Bett, 2011).

There is also a temperature dependency on the ability for some of Scotland’s deep-sea species to disperse, e.g. the reef framework-forming coral Lophelia pertusa. This limitation may restrict the ability for this coral to disperse, and thus reduce connectivity between MPAs connected under different climate regimes (Fox et al., 2016).

Knowing that these links between deep-sea ecosystems, oceanographic and hydrographic variables exist, it is reasonable to assume that changes to these parameters will have impacts on ecosystem structure and function including the ecosystem services they provide, e.g. affecting their distribution, their densities, and long-term population viability, etc. (MCCIP, 2018).

Water temperature in Scotland’s deep-sea regions are warming (see Climate change Sea temperature). Surface temperatures in the Bailey, Rockall, Hatton, and Faroe-Shetland Channel OMRs have on average warmed by 0.20, 0.15, 0.15, and 0.23 °C per decade, respectively, in the last 30 years (1989-2019).

The primary productivity in the surface waters and the associated vertical flux of Particulate Organic Carbon (POC) to the sea bed are important in regulating the biomass, abundance, biodiversity and activity of deep-sea organisms. Changes in the productivity of surface waters and the vertical flux therefore lead to changes in the deep-sea pelagic and benthic communities. The EU-ATLAS project for example showed that while current organic matter concentrations may not be critically limiting the diversity of octocoral and black coral communities at Rockall (modelled concentrations of 2.189 – 88.288 mg C m-2 d-1), the density of these corals increased with higher organic matter levels, suggesting that some coral taxa may thrive and even dominate areas when levels are very high (i.e. where high density coral garden VMEs are more likely to occur; Henry & Puerta, 2019; Puerta et al., 2020). 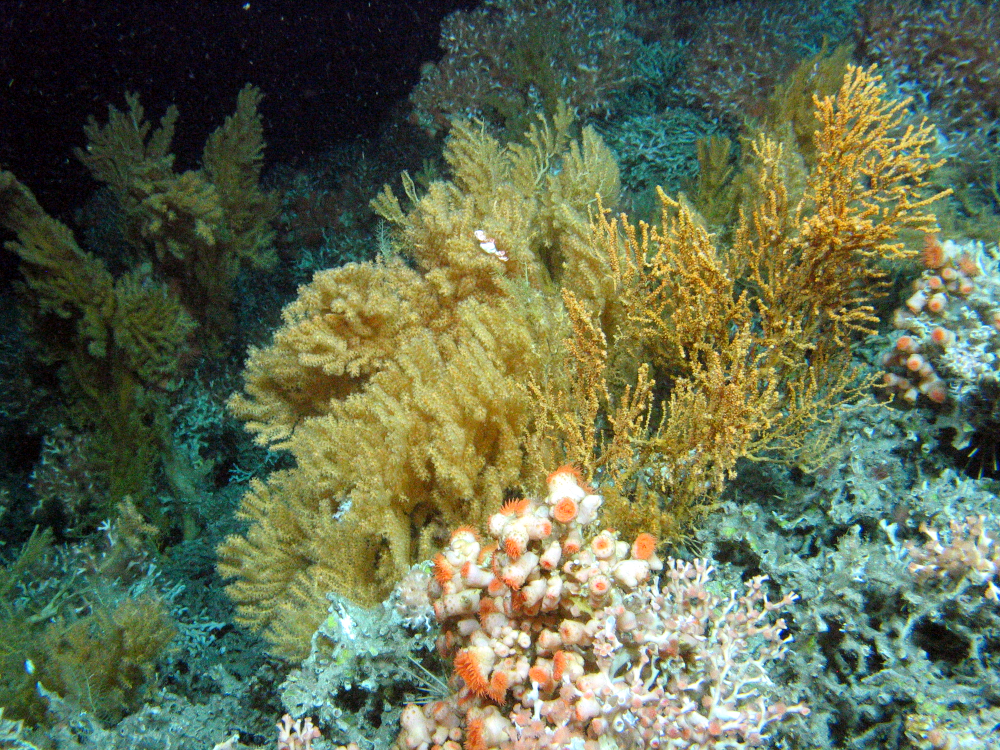 Seawater pH is expected to decline further as the excess carbon dioxide in the atmosphere is absorbed by the ocean (see Climate change Ocean acidification). The depth of the aragonite saturation horizon (ASH) marks the boundary between waters where aragonite is stable and those below where dissolution will likely occur. Calcifying marine organisms (i.e. those that grow CaCO3‑based shells and skeletons) are likely limited in their distribution by the depth of the ASH (currently 2,000 m deep). This depth is likely to become more shallow due to ocean acidification, exposing organisms to conditions that are unfavourable for growing CaCO3-based skeletons and shells. Observations from the Extended Ellett Line and OVIDE programmes have shown that anthropogenic CO2 is accumulating in the Rockall Trough at double the rate of the global mean (Humphreys et al., 2016) and that the ASH in the adjacent Irminger Sea is shoaling by 10-15 metres per year and the transport of carbonate ions to the deep-sea is 44% lower than in pre-industrial times (Perez et al., 2018).

Other oceanographic processes, such as internal tides and waves, hydraulic jumps and enhanced mixing, are also important to deep-sea communities as these influence the delivery of POC, nutrients and oxygen (Jeffreys et al., 2020). Changes in ocean state that drive these processes will therefore likely impact deep-sea species and habitats.

The cumulative impacts of climate change on Scotland’s deep-sea ecosystems will be compounded by any emerging anthropogenic threats too, thus it is vital to first map out multiple environmental stressors together. In doing so, the EU-ATLAS project found that Scotland’s deep-sea ecosystems will likely be exposed to lower POC levels, lower pH levels and warmer bottom temperatures by 2100 (Sweetman et al., 2017; Morato et al., 2020).

Temperatures are expected to rise while dissolved oxygen concentrations and ocean pH will decrease (Sweetman et al., 2017, and also see relevant sections in Climate change Ocean climate). These changes will also have an impact on organisms living in the water-column (pelagic) and sea floor (benthic) in the deep-sea. These changes will have an impact on larval dispersal (as larvae development and duration is temperature dependent; Fox et al., 2016) and POC flux (as degradation rate by zooplankton and microbes is temperature dependent; Jeffreys et al., 2020).

Climate models predict a decline in primary production globally, and this would lead to an associated decline in POC reaching the sea floor. The predictions of the decline in POC in the water column and at the sea floor vary, but scientific consensus is that the flux to deep-sea habitats will decline by the end of the century (Jeffreys et al., 2020). Puerta et al. (2020) predict a likely reduction of POC flux to the sea floor by 2100 of more than 50% relative to current conditions in parts of the Hatton and Bailey OMRs. Their predictions also calculate critical changes in the dissolved oxygen at the sea floor in the Hatton OMR, and in the pH at the sea floor in the eastern regions of the Rockall and Bailey OMRs. Changes in aragonite and calcite saturation states were not predicted to be critical in Scottish waters (but were in regions to the south west for aragonite).