Why are they important?

Many intertidal (such as rocky shores, sand and mud flats) and continental shelf (such as kelp forests and biogenic reefs) habitats provide a range of ecosystem services (see Natural capital, ecosystem services and the Blue Economy assessment) such as flood defence, recreation, food and uptake and storage of carbon. For example, the extensive kelp forests especially of the west coast of the Outer Hebrides dampen the effect of the Atlantic waves and biogenic reefs support coastal tourism through activities such as recreational diving. Both the intertidal and continental shelf regions, provide important habitat for commercial fish species and feeding areas for wintering waterbirds. More information on these habitats can also be found in the Intertidal and continental shelf assessments.

Many intertidal (see also the Climate change - Coastal habitats assessment) habitats are currently experiencing the greatest pressures due to their exposure to both the full set of terrestrial climate change effects (such as changes in air temperature, rainfall and storminess) as well as to the specifically marine effects (such as sea-level rise and increase in water temperature and acidity). Many species are already living at the extremes of their tolerances in intertidal and coastal habitats. For example, either during times of exposure during low tide or submersion during extreme high tide, intertidal and coastal organisms can be particularly sensitive to air and sea temperature warming, sea-level rise and extreme events such as heat waves and storms (Figure 1) (Burton et al., 2020; Mieszkowska et al., 2020). 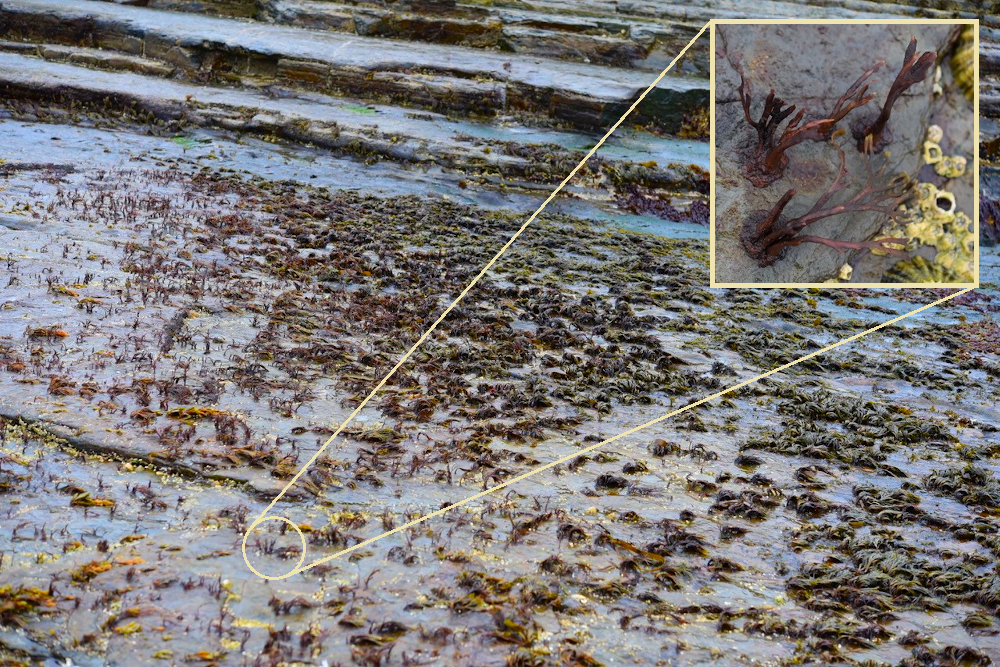 A common response to climate warming is an increase in the abundance of warm-water species, a decline in abundance of cold-water species and no change in abundance or overall distribution in those species that are in the middle of their natural distribution range. Information on the historical geographical and temperature ranges of species are therefore useful for understanding climate responses. Recent studies have averaged the temperature experienced by a species across its global range (from species distribution models and sea surface temperature data) to determine temperature affinity of a species (also expressed as Species Temperature Index). These indices of individual species can then be weighted by species abundance to provide information on changes in community temperature affinity (also expressed as Community Temperature Index).

For whole communities, the average temperature ‘preference’ can measure the relative success of cold- (i.e. species that are adapted to colder water temperatures and significantly less able to survive in warmer water) and warm-affinity species (i.e. those that are adapted to warmer water and significantly less able to survive at cooler temperatures). An increase in the average temperature ‘preference’ is an indication of a shift towards warm-affinity species, and can be used as an index to track changes in community composition over time (Burrows et al., 2018; Devictor et al., 2008).

The animals and plants living on the rocky coastlines of northern Europe have been well studied since the early 20th century and as a result changes in distributions have been seen and linked to climate. Most of these species have broad geographical ranges, but a few are at their northern (i.e. warmer water species) and southern (i.e. colder water species) limits in Scotland. Warmer sea water temperatures northwards allows the expansion in the range of warm water species which historically have a more southern distribution. At the same time the rising temperature is causing a retreat northwards of the southern limit of the distribution of more northern, cold-water species.

Sea surface water temperatures around Scotland tend to be higher on the west coast than the east, especially in the winter. Distributions of rocky coastal species follow this pattern with warm water species near their limits being restricted to the west coast. For example, the warm-water barnacles (Chthamalus stellatus and Chthamalus montagui) and the purple topshell (Steromphala umbilicalis) reach their northern and eastern limits on the Caithness coast and in Shetland and Orkney, with occasional individuals found beyond these limits along the north-east coast in the case of the barnacles (Figure 2). The purple topshell extended its range about 50km eastwards along the north coast between the 1980s and 2000s (Mieszkowska et al., 2006) but further surveys in the 2010s showed only increases in abundance at range-edge sites rather than true extensions. Likewise, the barnacles have tended to increase in abundance towards the edge of their ranges but have not noticeably yet extended their distributions. The strong tidal flows in the Pentland Firth and the lack of habitat further north may be barriers to future expansion of these coastal species. More southern species, such as the toothed topshell (Phorcus lineatus), are found in Northern Ireland but not in southern Scotland and may cross the Irish Sea as temperatures continue to warm. While distributions may not have changed, the general pattern of increases in abundance of warm-water species and declines in cold-water ones is evident in rocky shore communities too (Burrows et al., 2020). 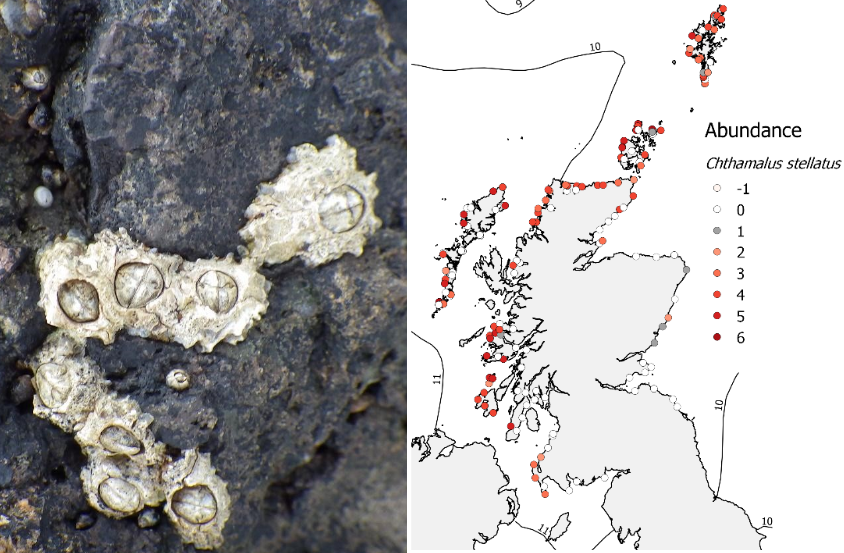 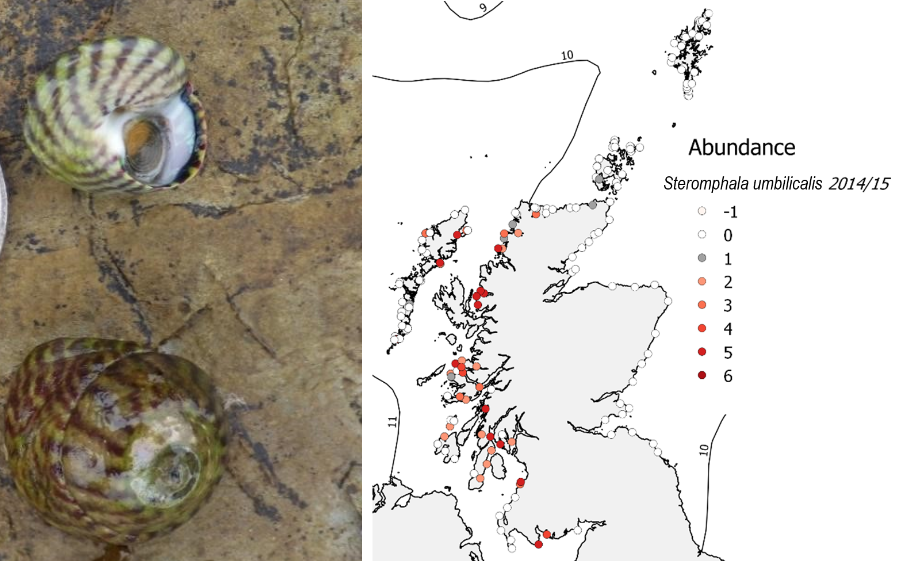 Lastly, non-native species are appearing on Scotland’s coasts, with many of these being warm-water species. For non-natives such as the Pacific oyster (Crassostrea gigas) cooler summer temperature (<14°C) may have limited the expansion of their distribution, but as sea temperatures rise, it is likely to enhance their spread.

In contrast, the wireweed Sargassum muticum has continued to spread up the west coast of Scotland since its initial appearance in 2000 (Davison, 2007). This species tolerates a wide temperature range, so its continued spread around Scotland is unlikely to be restricted by temperature.

The future distribution of marine habitats of particular ecological importance and biological diversity, including Priority Marine Features such as horse mussel beds and maerl beds, have been modelled by recent studies which looked at where in Scotland the environment is likely to remain suitable for them. Simon-Nutbrown et al. (2020) developed a species distribution model for maerl beds, which shows that bathymetry, temperature at the seabed and light availability are the primary environmental drivers of distribution. To study possible future impacts, the outputs from two IPCC Representative Concentration Pathways (RCPs) were used. These are defined as potential future greenhouse gas concentration trajectories, and the scenarios are numbered by the possible radiative forcing in 2100 (in units of W m-2). The species distribution model predicts large-scale spatial declines in distribution under all climate projection scenarios, ranging from 38% decline under RCP 2.6 (low emission scenario) up to 84% decline under RCP 8.5 (high emission scenario), with the most rapid rate of decline up to 2050. The areas where beds are most likely to persist under projected climate change were identified as Loch Laxford, north of Arran, north of Islay, Mainland Orkney and Mainland Shetland (Figure 3). Prioritising these areas for future conservation efforts might maximize the long-term survival of this globally important ecosystem in Scotland (Simon-Nutbrown et al., 2020). 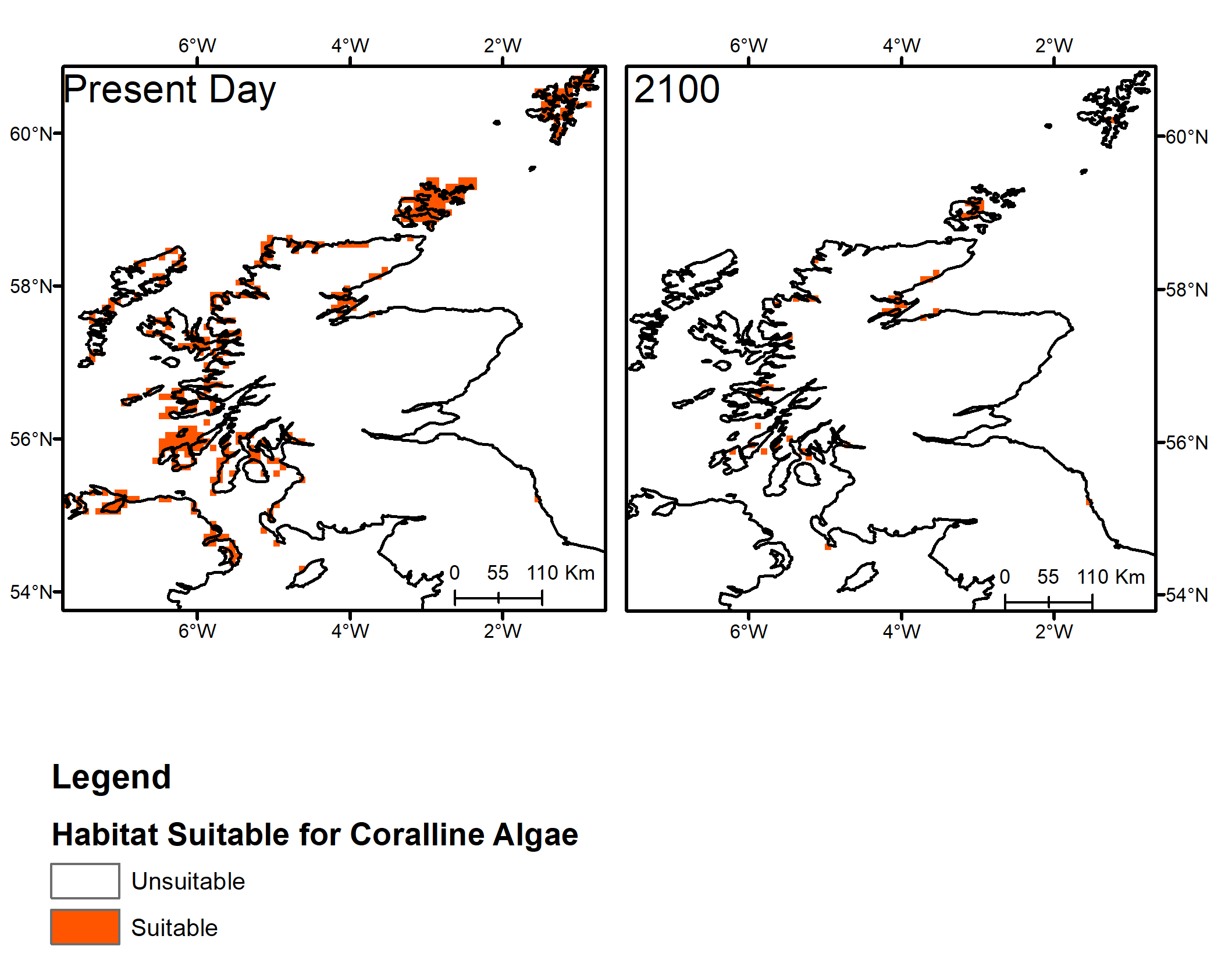 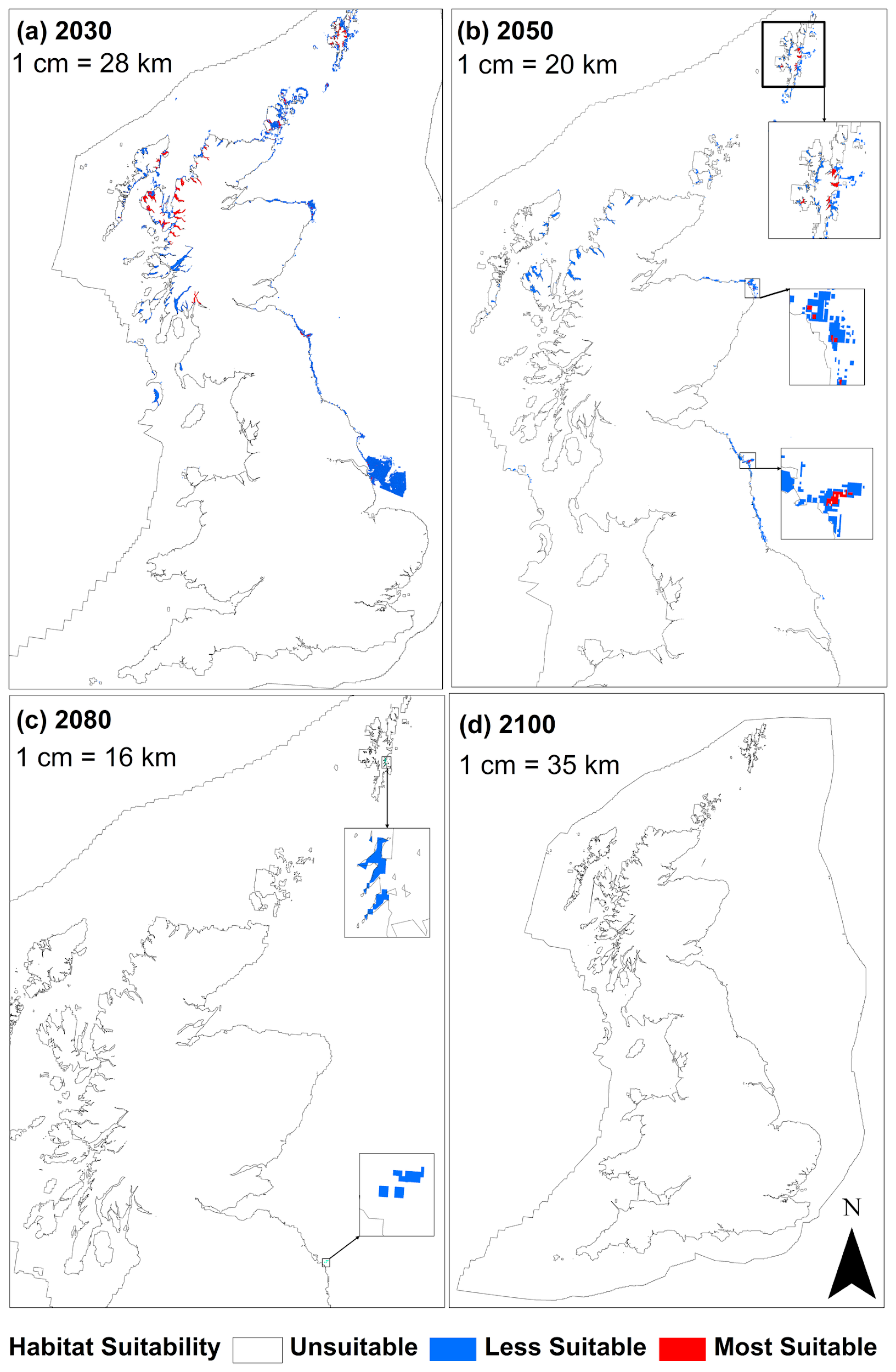 Figure 4: Model prediction maps for Modiolus modiolus beds for the four projected climate change epochs (a) 2030, (b) 2050, (c) 2080 and (d) 2100. This does not take account of the potential sporadic recruitment patterns or the longevity of the mussels, and as such some beds may persist but be in decline over a slightly longer timeframe.

Both of these modelling studies suggest that the decline and migration of these habitats will need consideration in future management. Other habitats may increase their ranges into Scotland or grow in extent.

Many habitat-forming marine species are sessile as adults but have planktonic larval stages, so depend directly on ocean currents for dispersal and linking of different populations. Millar et al. (2019) investigated these connections for Scottish flame shell beds and horse mussel beds. Climate-driven changes to currents, changes to pelagic larval duration due to changing temperatures, challenges to larval survival resulting from variable food availability and ocean acidification will all affect the connectivity between these populations, as well as all other marine habitats, with as yet unpredictable effects, particularly if possible synergistic or paradoxical effects are taken into account (Jeffreys, Robson, & Narayanaswamy, 2020).