To reverse declines in the extent and quality of a number of Scotland’s most sensitive seabed habitats, momentum is building to capitalise on recent Marine Protected Area (MPA) designations and implement active habitat restoration projects.

Increasing or improving the status, ecological value and / or extent of marine habitats is often seen as a solution to habitat loss and deterioration. ‘Habitat enhancement’ is used as an overarching term in this case study to encompass a range of recovery and restoration activities.

Best practice in the marine environment often entails identifying and removing pressures to allow natural processes to support recovery. However, restoration (any activity that initiates or accelerates recovery - including re-establishing a habitat in a location from which it has been lost) may also be appropriate in some situations. Where there is no evidence of former presence, this may be termed habitat creation.

In general, marine enhancement projects are in their infancy compared to terrestrial counterparts, due in part to the extensive scale of marine habitats and the costs associated with working at sea but also issues surrounding common ownership (Hawkins et al., 2002).

The challenges of restoring marine habitats are numerous - determining the need for and selecting suitable locations in the first place; logistical issues associated with accessing sites (especially in the subtidal); sourcing seeds or juvenile / adult organisms, deploying these and monitoring subsequent colonisation and / or growth; and ultimately, determining whether a project has succeeded (which may take many years). Nevertheless, there are examples of marine habitat restoration projects from around the world (e.g. oyster reefs in Chesapeake Bay, seagrass beds in Sweden and the USA, etc.) across a range of timescales and with differing levels of success (e.g. Infantes et al., 2016; Lefcheck et al., 2018; Moksnes et al., 2018; Orth et al., 2017; Schulte & Burke, 2014; Schulte et al., 2009).

The Scottish Code for Conservation Translocations (National Species Reintroduction Forum, 2014) is the framework for habitat restoration projects in Scotland. The code highlights the potential risks (e.g. harm to the conservation status of the donor site(s), the introduction of invasive non-native species, etc.) and benefits of restoration (e.g. enhanced ecosystem services and community engagement).

Initial appraisals as to whether restoration initiatives should take place must determine whether there is evidence of a decline in a habitat, assess the need for restoration, project feasibility, the spatial and temporal scale of the work, and set out clear objectives that quantify what success would look like at specific locations. Careful consideration must be given to locations selected for restoration to maximise the likelihood of a successful outcome. Potential pressures should be clearly understood and manageable. The ecological traits of characterising species of different habitats (e.g. longevity, connectivity, recruitment, etc.) and their response to pressures including the effects of climate change should be considered. Where requisite detailed information on the biology and ecology of species or habitat of interest is lacking, further research should be undertaken before restoration begins.

Marine habitat restoration research has been going on in Scotland for approximately 20 years, although mainly through small scale studies.

In relation to biogenic habitats encompassed by this Scottish Marine Assessment 2020, the potential for restoration of serpulid reefs in Loch Creran Marine Protected Area (MPA) (also see Persistent damage to the Loch Creran serpulid reefs case study) is the subject of ongoing research by Heriot-Watt University (e.g. Chapman, Moore, Harries & Lyndon, 2007; Cook, 2016; Moore et al., 2020). Monitoring of serpulid reef development on a variety of natural substrates introduced by Cook in 2012 revealed substantial development of aggregations on cobbles and scallop shells throughout the period 2012 - 2017, despite a marked decline in reef condition in the adjacent area and throughout most of the loch. The possibility that availability of suitable substrates might limit reef development was suggested by Moore (1996) following the finding of a correlation between reef abundance and the availability of colonisation surfaces within the preferred muddy-sand areas of the loch. The suitability of a substrate is likely to be linked to the extent to which it provides a refuge from predation (Moore et al., 2020). The more spatially complex substrate units deployed by Cook (2016) (c.20 cm tall piles of cobbles and scallop shells held together by 1.5 cm mesh netting) which attracted the greatest reef development will have also offered the greatest barrier to access by grazers such as sea urchins (Figure 1). The density of urchins has been estimated at 577 m-2 in dense serpulid reef habitat (Moore et al., 2020) and the observed poor regeneration of reefs from broken reef fragments in the loch may therefore be related to the greater exposure of the fragments to grazing. Current research includes examination of the potential role of predation in influencing reef development through the deployment of predator exclusion cages. 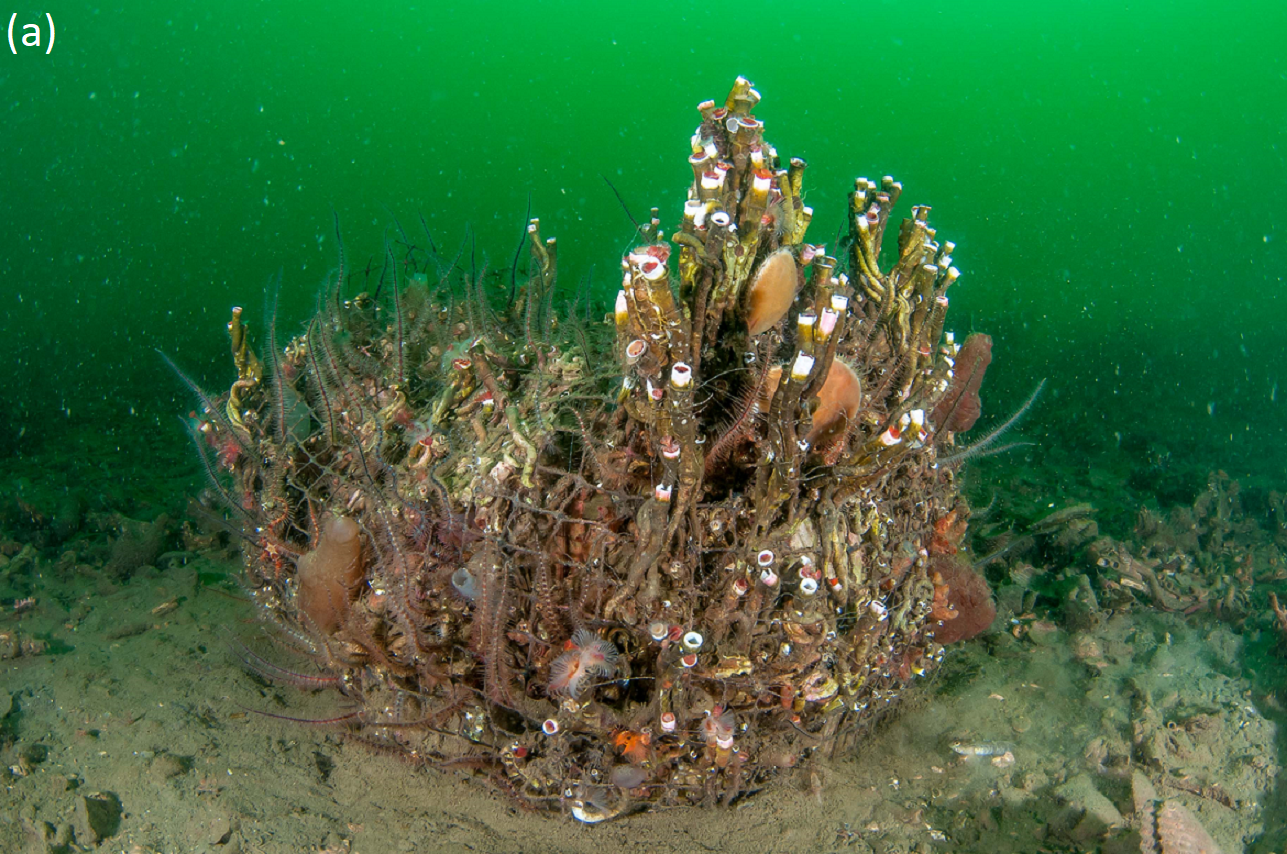 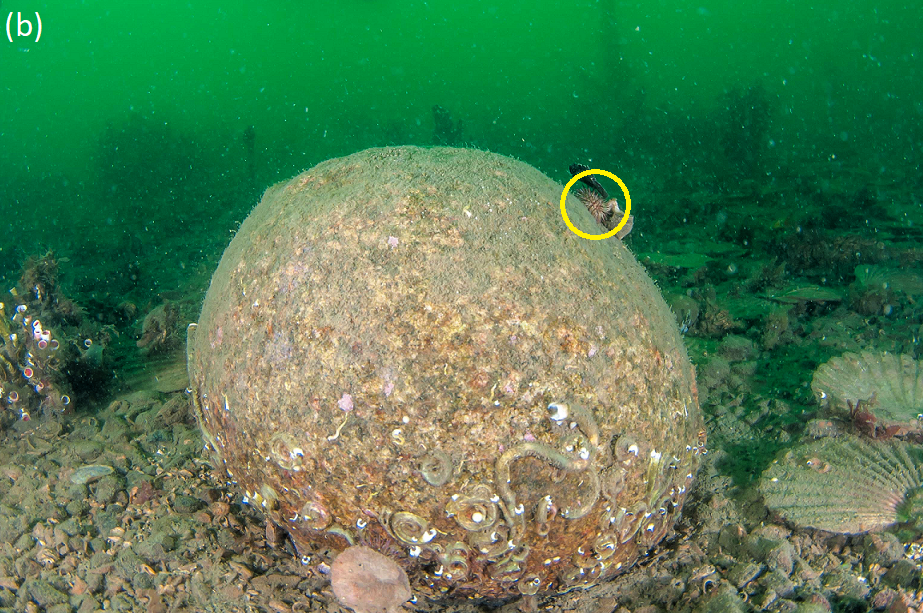 Figure 1: Examples of experimental colonisation substrates deployed in Loch Creran in 2012, showing the difference in serpulid reef development observed in 2017 between net-enclosed scallop shells (a) and boulder (b). Note the sea urchin (Psammechinus miliaris) grazing on boulder (highlighted by a yellow circle). © Heriot Watt University.

Overall, the evidence from Loch Creran suggests that while the recent decline of the serpulid reef habitat may represent a phase within a natural temporal cycle of reef development, the spatial extent and condition of the habitat can be improved by deployment of appropriate, natural substrates.

Subtidal seagrass restoration trials have been going on over the past six years in Wales (although research has been ongoing for much longer across the globe). The success of seagrass restoration projects is strongly related to increasing spatial scale of a project and site suitability, e.g. environmental conditions (van Katwijk et al., 2019). The bigger the size of the project the more viable the habitat plot is likely to be, with a greater sharing of environmental risks (e.g. ability to withstand storm damage).

Sites suitable for restoration are also being considered in Scotland, taking into account the current status of intertidal seagrass beds at specified locations as well as accessibility, the potential to impact other seabed habitats, and the need for management of pressures. The potential benefits of seagrass meadow restoration include enhanced biodiversity, sediment stabilisation and in the longer term, a contribution to the Scottish blue carbon resource. 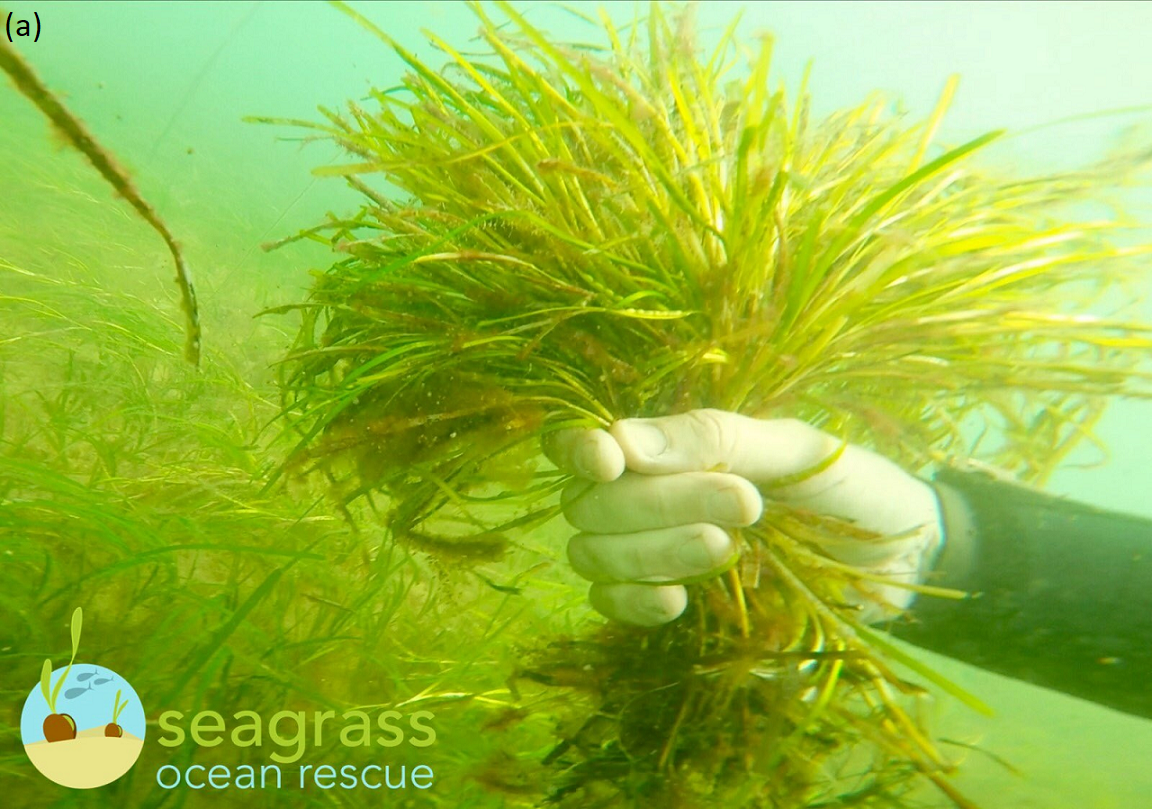 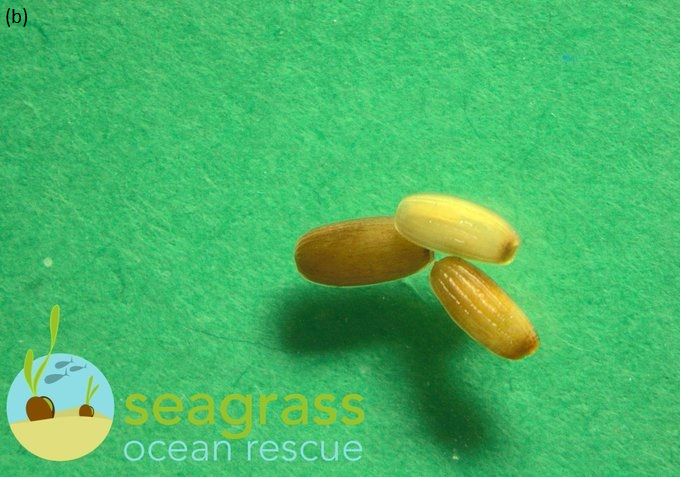