Tidal energy is an abundant, predictable and clean source of energy that can be installed in deep water, shallow water, estuaries and large rivers.

In May 2014, Nova Innovation installed the first community owned tidal turbine in Bluemull Sound in the Shetland Islands. The Nova 30 device had a maximum generating capacity of 30 kW and powered 30 homes. This device was decommissioned in 2016. This trial deployment was a tremendous success, delivering Nova’s first tidal turbine and exporting power to the grid. In doing so, Nova proved that this could be done quickly, safely and cost-effectively using small local workboats. Some factors that contributed to the success were:

A huge amount was learned from the Nova 30 project about turbine design, offshore operations and business management, all of which has been the foundation for Nova’s subsequent success. Whilst subsequent Nova deployments are not community owned in future there is great potential for community ownership of tidal energy once the sector is more commercially mature.

In 2016, Nova Innovation deployed the world’s first offshore tidal array to supply electricity to the grid with greater than 17,000 generating hours reached in 2019. These turbines have continued to generate and export electricity to the grid since then. The first three Nova M100 devices (installed capacity 300 kW) were deployed in 2016 and 2017 (Figures 1 and 2). 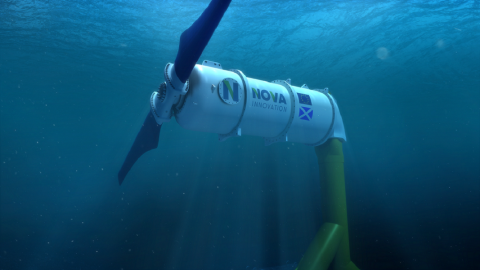 In 2018, Nova Innovation was granted licences to extend the array to six turbines (increase capacity to 600 kW) and reconfigure the turbines within the array. In 2018, Nova Innovation worked with Tesla to add energy storage to their tidal technology. This created the world’s first grid connected tidal power station with the ability to deliver baseload (constant, steady-state) power and deliver energy on demand to meet consumer needs.

In August 2020 a fourth 100 kW turbine was added to the array. This was the next generation of Nova's M100 turbine, with no gearbox (direct drive). A further two 100 kW turbines will be installed in 2021, taking the total to six. This will be followed by reconfiguration of the turbines in the array to enable information on array effects and optimal layout design to be gathered. 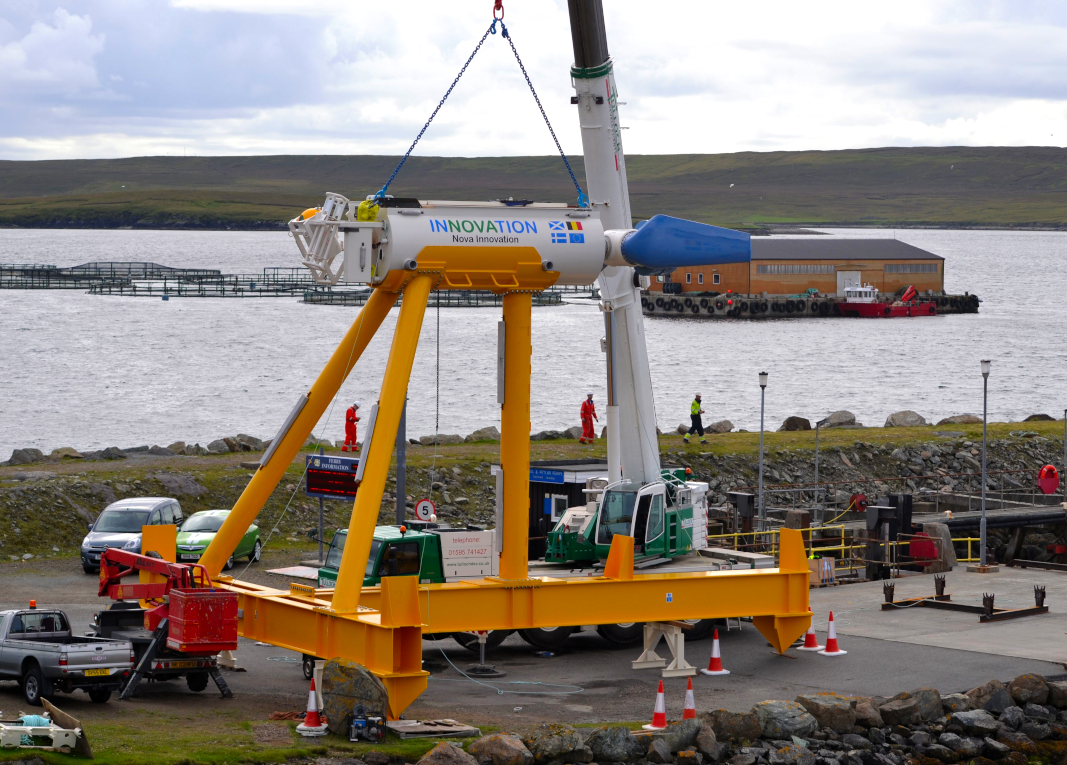 The Shetland Tidal Array is located in the Bluemull Sound, Shetland (Figures 3 and 4) just offshore from the Ness of Cullivoe and between the islands of Yell and Unst. The turbines are located in water between 30-40 m depth and are not visible from the surface. 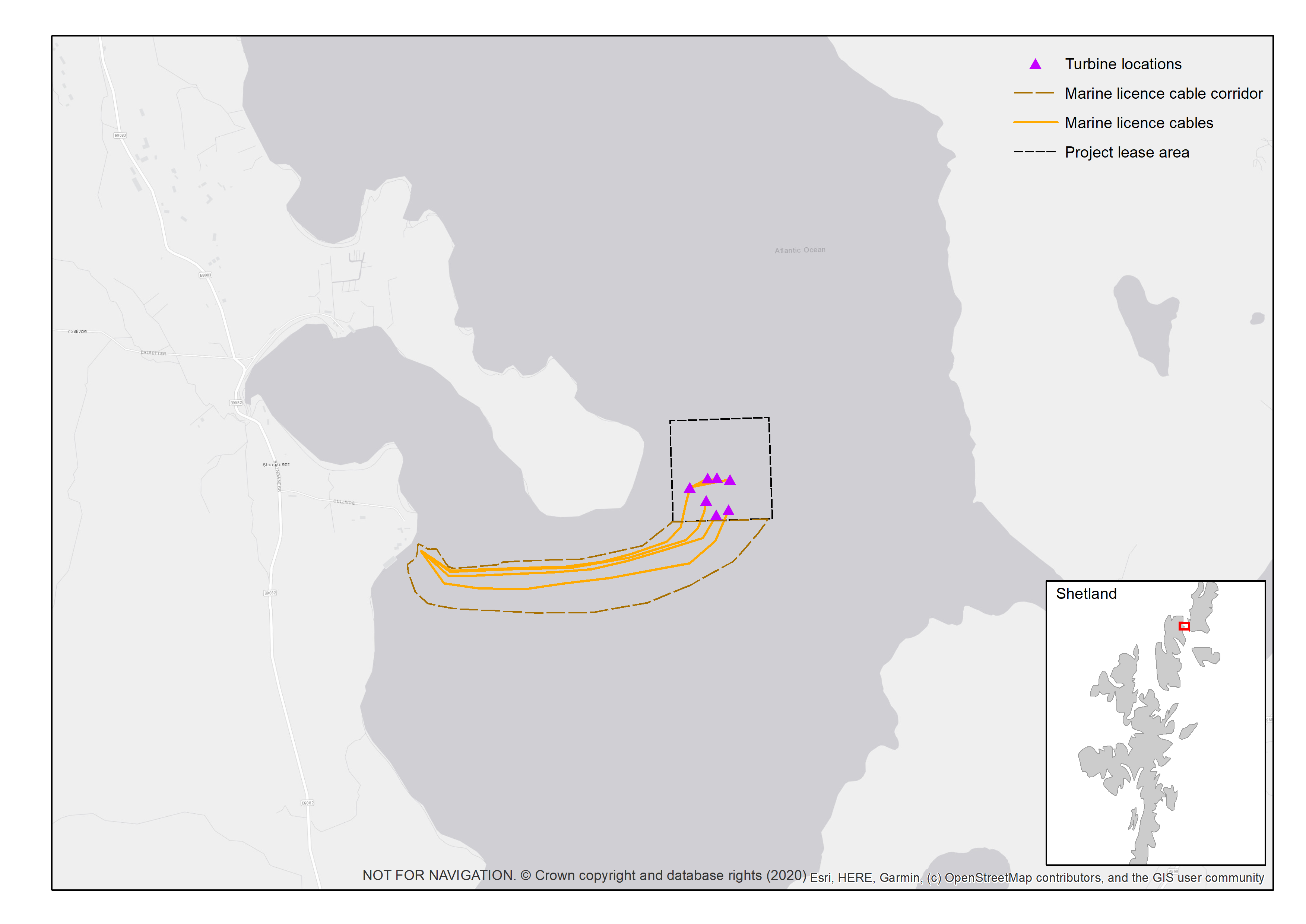 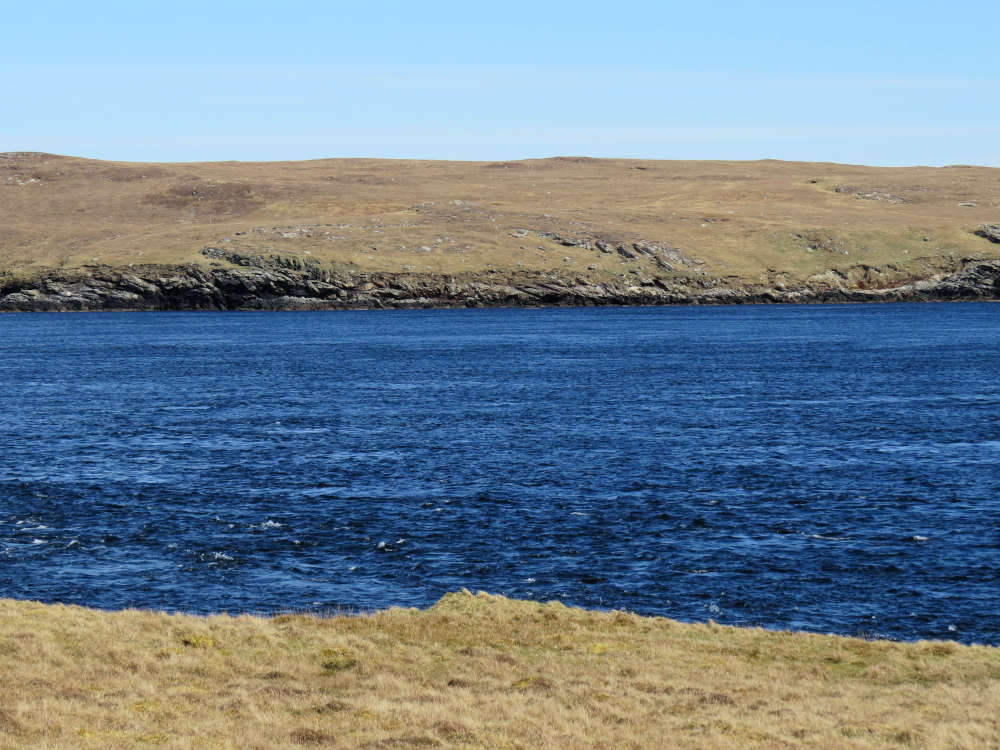 The Nova M100 device is a 100 kW seabed mounted tidal turbine. It has a two blade rotor and has been designed with simple and efficient blades which allows the turbines to be easily removed and maintained. The rotor diameter is 9 metres and the rotor speed is 15 to 25 rpm. The modular system also allows the device to be easily installed and transported using local vessels and infrastructure. The latest turbine to be installed in August 2020 was the M100D, Nova's next generation direct drive turbine with no gearbox.

Nova Innovation has undertaken monitoring at the site since 2010, and gathered a significant volume of data. This includes 20,000+ recorded hours of subsea video footage and >9 years of data from land based marine mammal and bird observations. The analysis of the data collected to date indicates that the presence of diving birds and marine mammals in Bluemull Sound is low and even lower again in the area immediately around the turbines. No collision or near misses have been observed in the subsea video footage analysed to date.

The Shetland Tidal Array has received support from several partners including Elsa (a Belgian renewable energy developer) and Scottish Enterprise. This has enabled the project to be delivered with over 80% Scottish supply chain content and 100% European content. The project has also received funding from the Scottish Government’s Low Carbon Infrastructure Transition Programme.

Nova Innovation is the lead partner in the Enabling Future Arrays in tidal (EnFAIT) Horizon 2020 Project which aims to learn from the Shetland Tidal Array analysing the array performance, reliability and flow regime to accelerate the development of tidal energy. The Shetland Tidal Array will be extended to six turbines and the layout reconfigured under this project.