The ability to quantify anthropogenic impacts on marine mammal populations is becoming ever more important and acquisition of surveillance data is critical for evidence-based policy responses to address issues such as emerging diseases, assess anthropogenic threats or monitor ecosystem change. In Scotland, some of these data are provided by the Scottish Marine Animal Stranding Scheme (SMASS) who monitor marine animal mortalities. SMASS has been in operation since 1992 and provides coordinated surveillance and investigation of cetaceans, seals, sharks and marine turtles that become stranded on Scotland’s beaches. SMASS is part of the UK Cetacean Strandings Investigation Programme (UK CSIP), however, uniquely to Scotland SMASS also investigates mortalities and undertakes post mortems on dead or euthanased seals.

A stranding is where an animal is beached or left by a receding tide. In some situations animals are alive when they strand (live stranding) and subsequently either die or refloat and recover, in others strandings can be beach-cast animals that died at sea. Wherever possible, a post mortem examination is carried out on the stranded animal by an experienced team of veterinary pathologists and biologists. This provides the opportunity to investigate the cause of death and the role that human activity might have played, either directly or indirectly, in such events. As highly mobile top predators, marine mammals are also useful sentinels of the marine environment. The data and samples collected from examination of stranded animals, data in many cases unobtainable by any other means, are used to provide insights into pollutant burdens, prey depletion and wider issues of ecosystem health and change.

SMASS also operates a citizen science programme which provides training to and coordination of a network of volunteers. The volunteer network, distributed throughout all the coastal communities of Scotland, help with data collection and sampling of stranded animals. The network has been in place since 2014 and has proved invaluable, both in cases where the SMASS team were not logistically able to attend cases, and as a wider mechanism to engage members of the public in marine conservation. SMASS also runs an annual science forum for the volunteers and wider public comprising a series of talks, workshops, and demonstrations on various aspects of the marine environment. 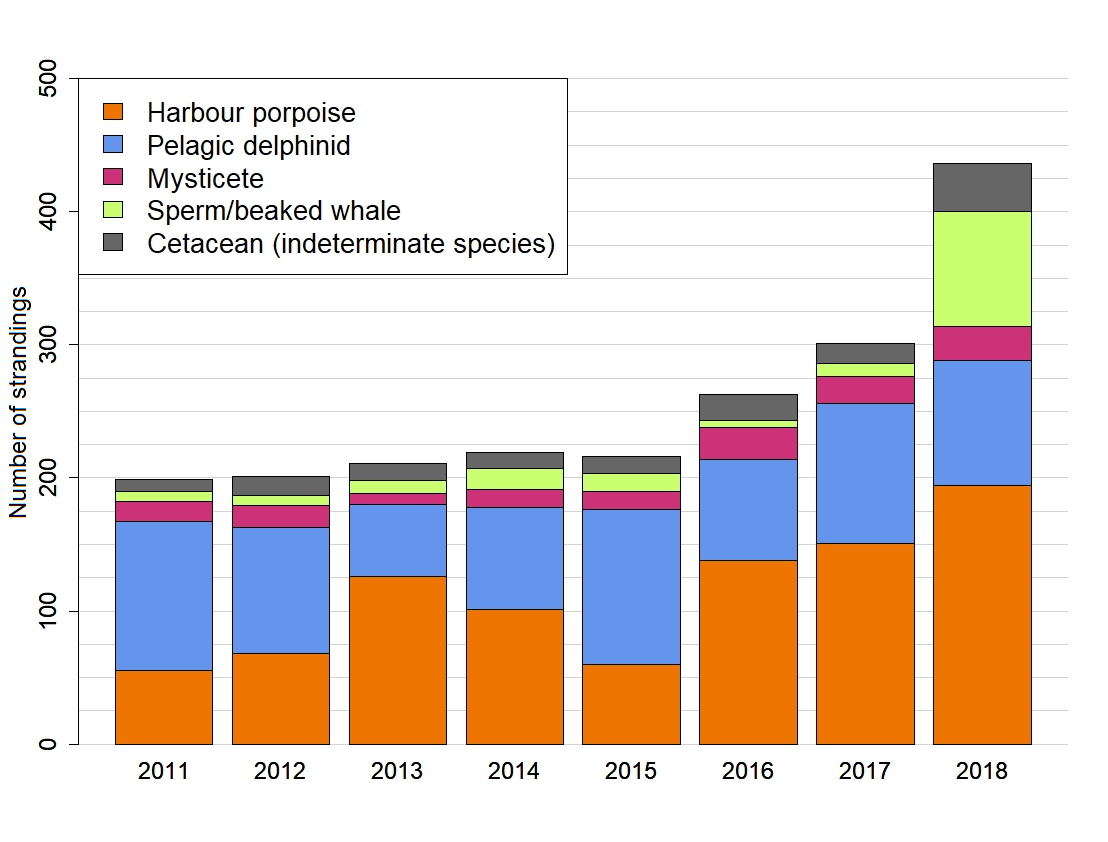 Figure 1: Total number of strandings of cetaceans per species subclass, reported to SMASS annually for the 2011 to 2018 reporting period. 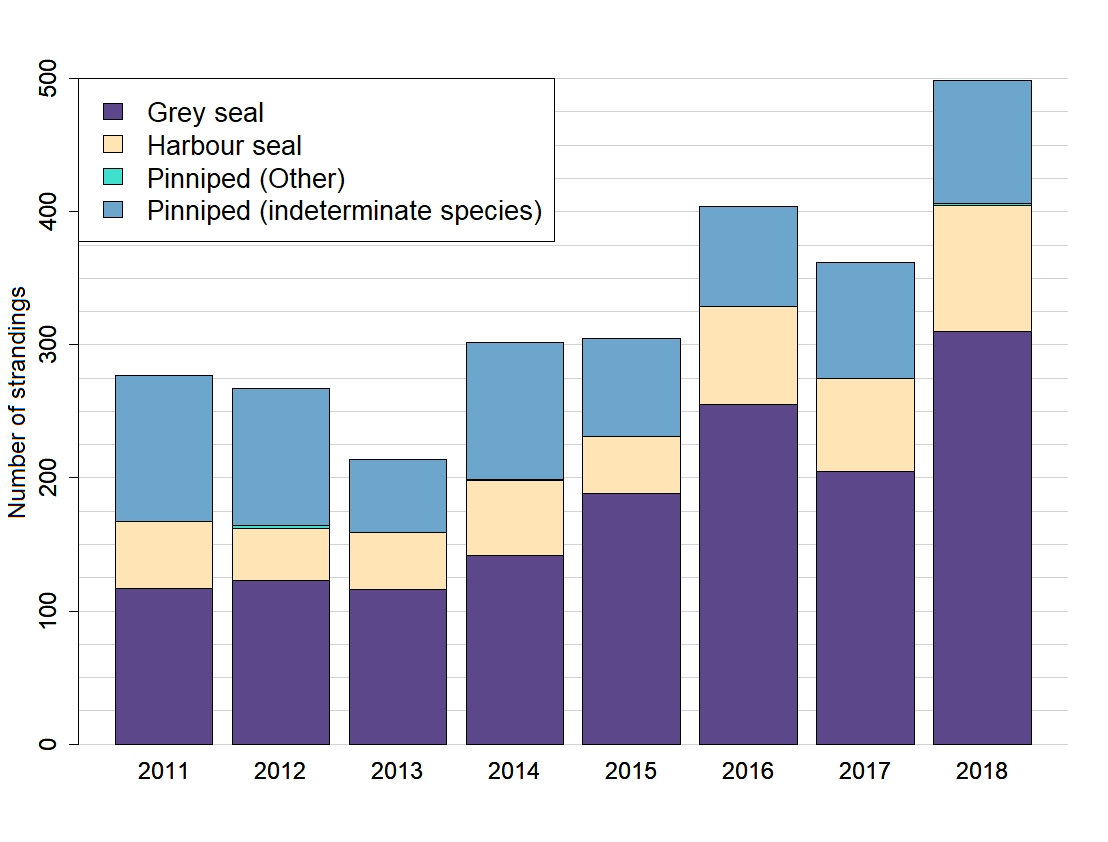 Figure 2: Total number of strandings of pinnipeds per species, reported to SMASS annually for the 2011 to 2018 reporting period.

Given these data cover 20+ species over four main taxa there is no overall geographic or seasonal cluster to strandings reports. Nevertheless, there is some seasonality when looking at individual species classes (Figure 3). For example for seals, this seasonality strongly coincides with the pupping season when numbers go up both for grey seals (which pup in the autumn months) and harbour seals (which have their pups in summer months). The majority of harbour porpoise strandings are found in early spring months (March and April) when water temperatures are at their lowest and juvenile animals in particular are at risk from starvation and hypothermia. This is also the time of year when bottlenose dolphins are starting to be seen closer to shore, and hence traumatic attacks on harbour porpoise occur more frequently.

There are many factors which have been identified as causing marine strandings; biological, environmental, metabolic, traumatic, both anthropogenic and natural. Furthermore, once an animal has stranded, it has to be found, reported, and examined, and thus, similar to any opportunistically collected data, these records are influenced by social factors such as population density, weather, public awareness of and engagement with the scheme. 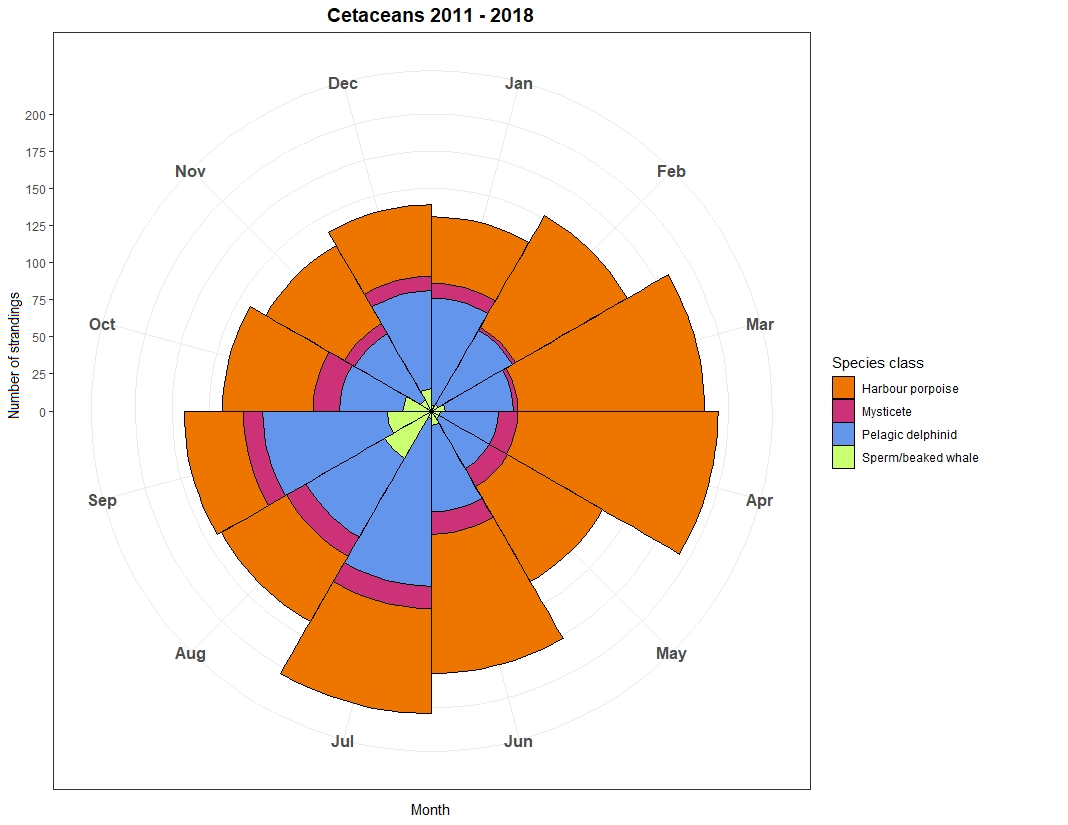 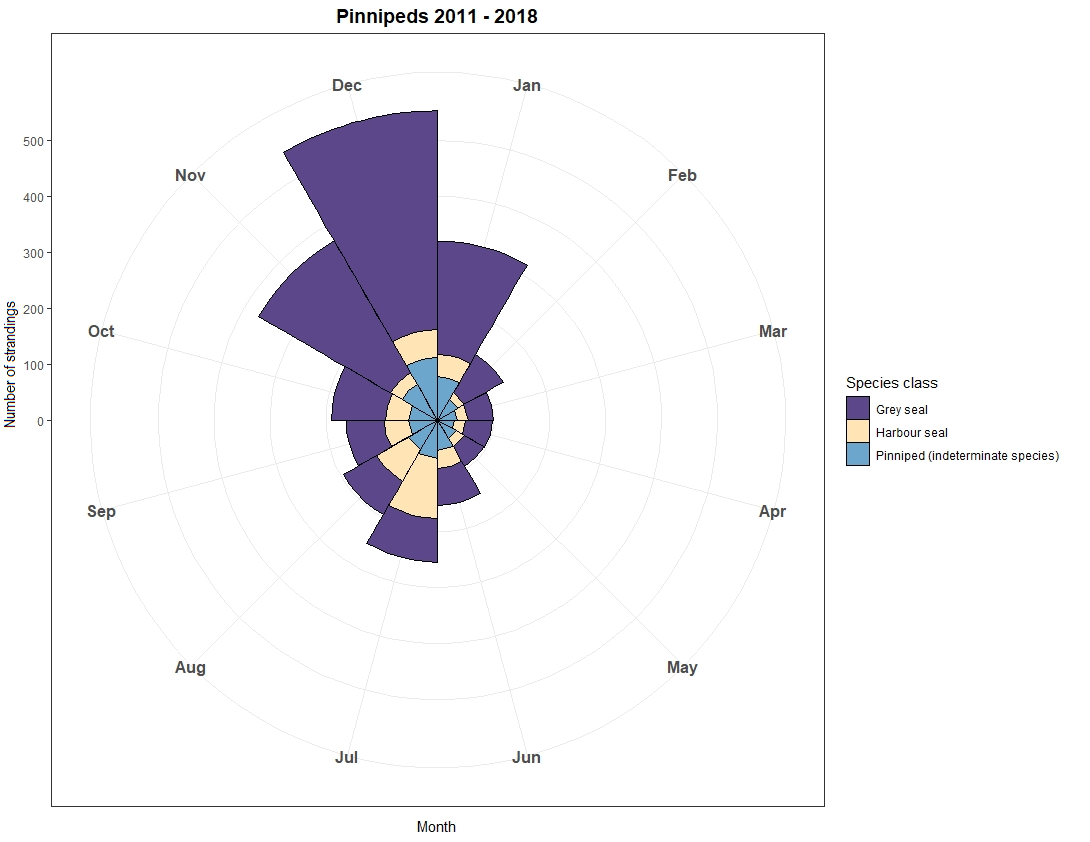 Figure 3: Roseplot showing the seasonal distribution of stranding reports of cetaceans (top) and seal species (bottom) per subclass. Data show total numbers reported per month during the reporting period 2011 to 2018. 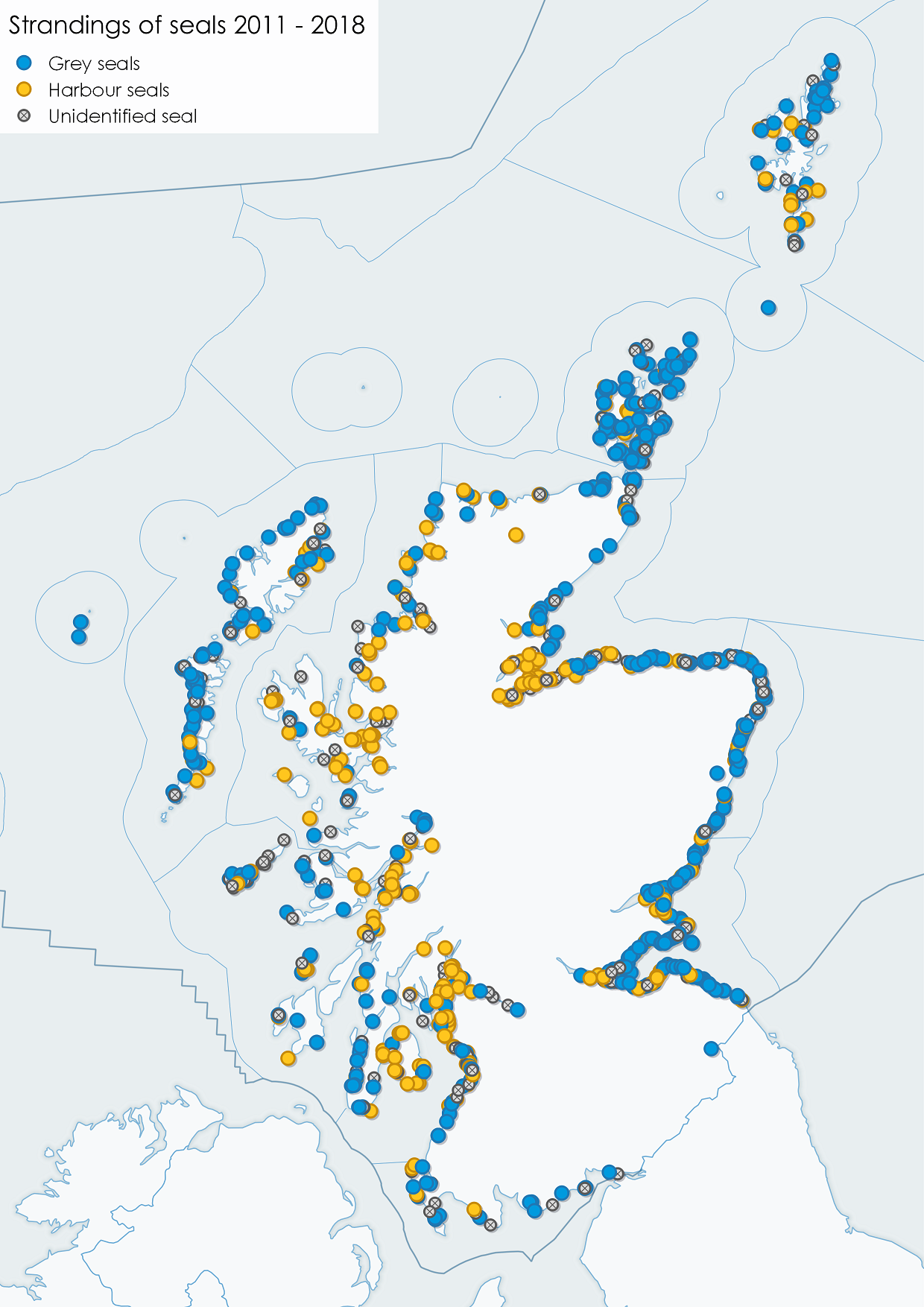 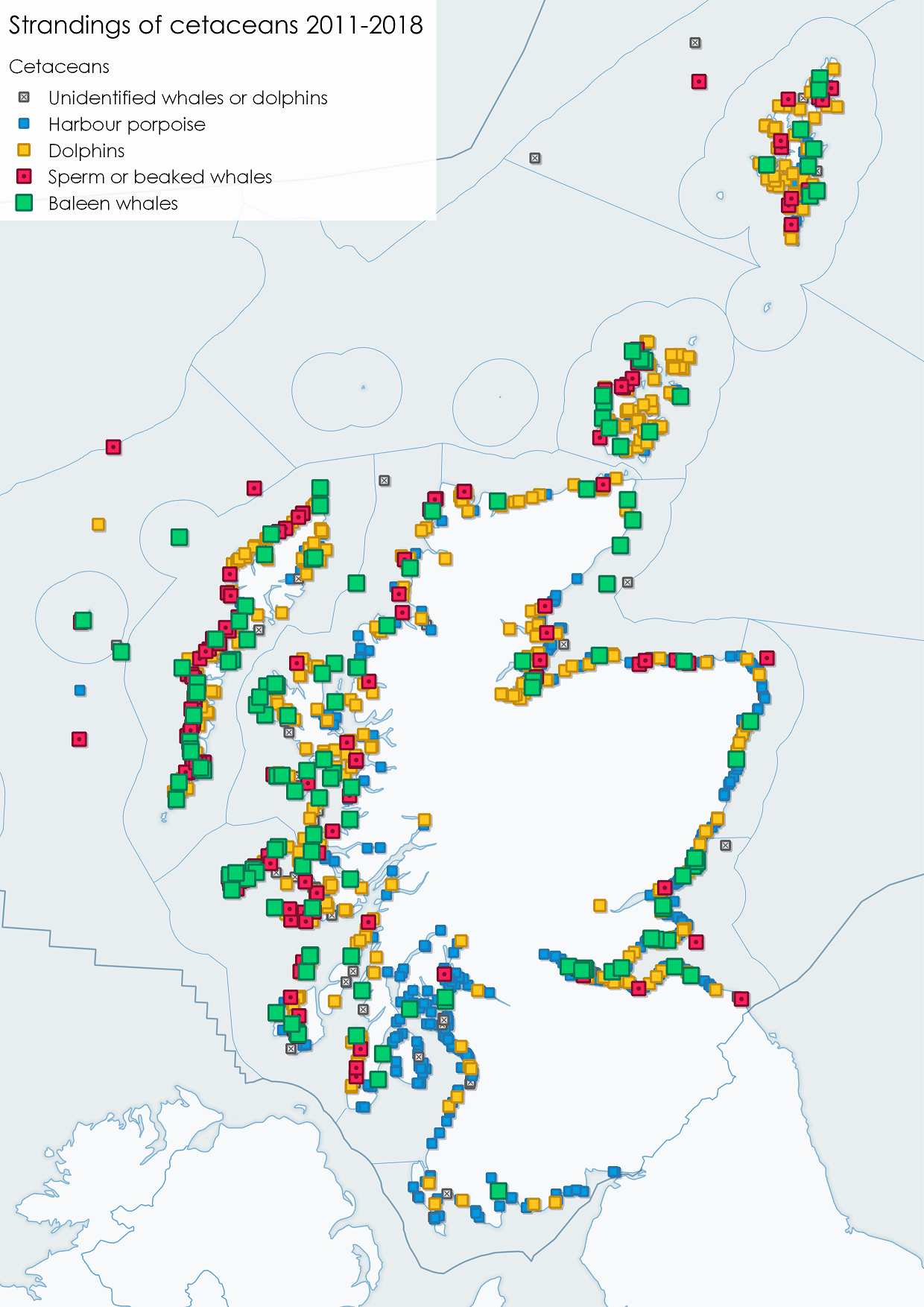 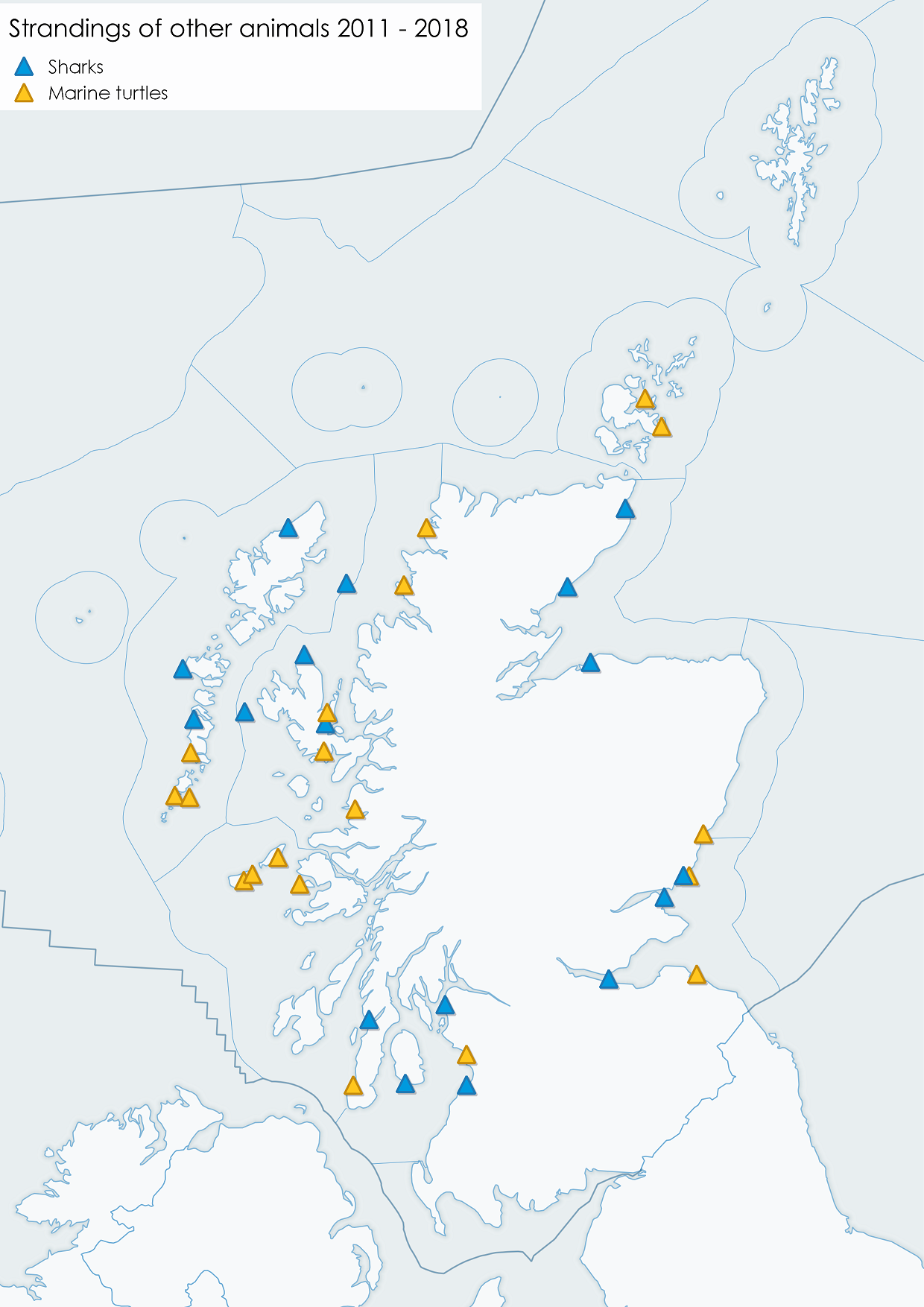 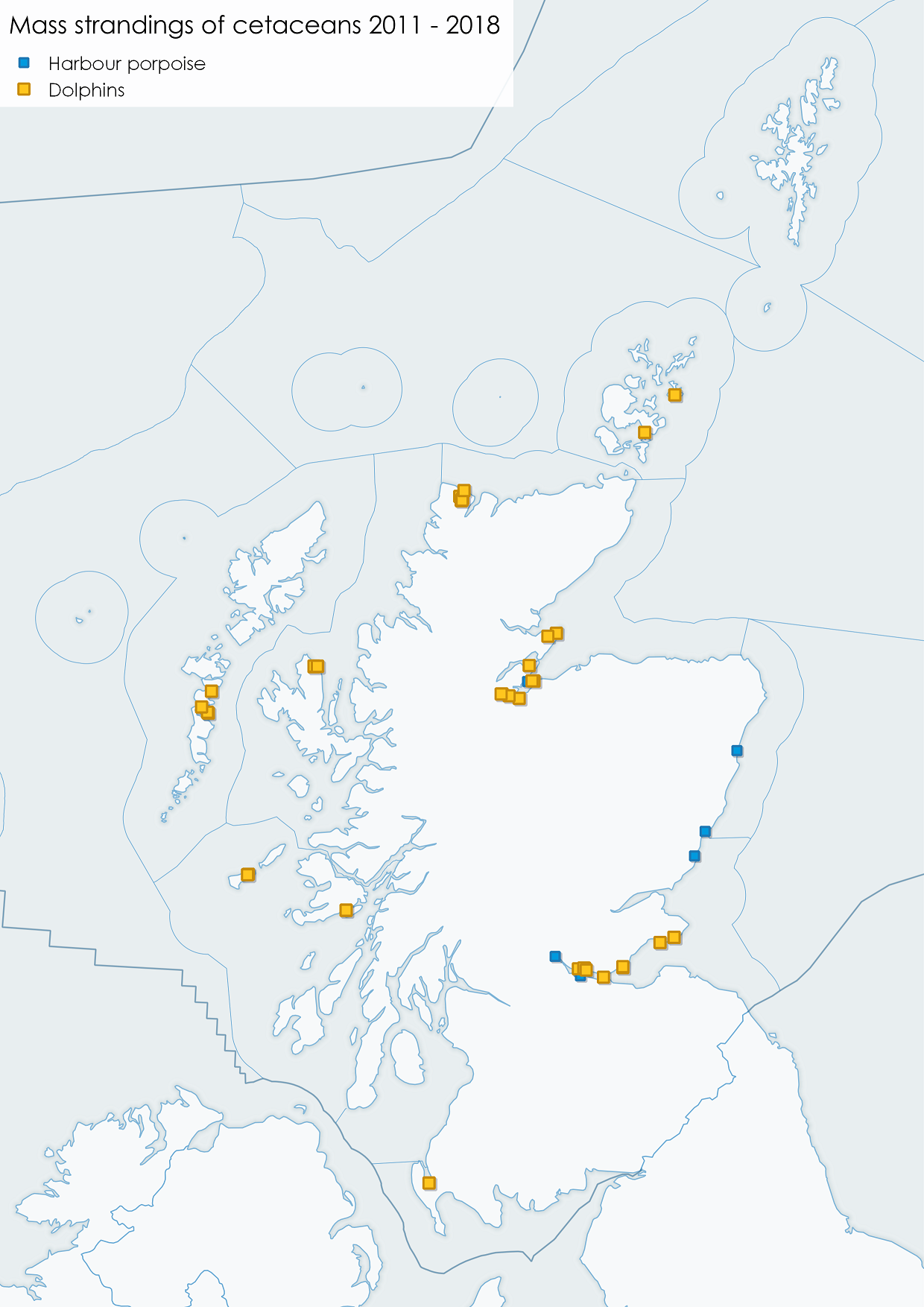 Long-finned pilot whales (Globicephala melas) are highly social pelagic delphinid species and one of the most common species known to mass-strand globally. The deep waters along the continental shelf edge provide the usual habitat for this deep diving species, but increasingly animals are being sighted closer to shore. This presents various hazards for this species and aside from several individual and small group strandings, there have been three major mass stranding incidences of long-finned pilot whales in Scotland over the past decade.

A cetacean mass stranding event (MSE) is defined as two or more animals stranding that are not a cow/calf pair. Live stranding events and more specifically mass live stranding events are extreme situations that elicit much interest from both the public and scientific community and where public safety, animal welfare and conservation science issues have to be carefully managed.

Thorough investigation of these events usually requires the consideration of a number of natural and anthropogenic factors. SMASS undertook detailed investigation of the three main events: a large mass stranding of 70+ animals in the Kyle of Durness in 2011, a group of 40+ animals stranded on the Fife coast in 2012, and a pod of at least 21 animals stranding on the island of Staffin in Skye in 2015.

Pathological investigations into MSE events involving socially closely bonded species such as pilot whales show that many of the casualties are physiologically healthy at the point of stranding. Unfortunately the stranding process rapidly invokes a cascade of processes which can rapidly lead to death, even in otherwise healthy animals. These include a combination of factors including hyperthermia, myositis (muscle inflammation) and water aspiration. Investigations have to look beyond strandings-invoked pathology for wider indications of trauma, disease and metabolic or physiological derangement. Samples are therefore collected according to standard protocols and investigations into potential trigger factors for the MSE are undertaken. The investigations into the three MSEs in Scotland included detailed pathological examination to quantify overall disease burden and specific diagnostics comprising microbiology, histopathology, morbillivirus screening (RT-PCR), quantitative analyses for algal toxins (domoic acid and saxitoxin) and organochlorine pesticides and 25 individual chlorobiphenyl congeners in blubber and metals concentrations in liver. External triggers, such as unusual climatic or oceanographic conditions were assessed. Given the known impact underwater noise can have as a primary or behavioural trigger to these events, all investigations assessed the temporal and spatial distribution of potential civilian and military sources of acoustic disturbance preceding the strandings.

The 2015 MSE identified one of the older, likely matriarch females as a ‘sick leader’ and the likely cause for the stranding. This animal was having significant problems giving birth and behavioural observations from members of the public made prior to the stranding indicated an animal in apparent distress being circled by other members of the pod. Post mortem examination  confirmed a difficult or obstructed labour in this animal but no other significant pathology in the other seven animals that died during this event. The MSE in the Kyle of Durness was found to be likely caused by an extreme behavioural response to a series of underwater explosions, conducted in the vicinity of the Kyle during the previous 24 hour period that may have ‘pushed’ animals into a complex, shallow tidal zone. On the basis of this investigation, discussions with the UK Ministry of Defence resulted in modification of their operational practices for munitions disposal to hopefully prevent further occurrences. The cause of the stranding in Fife was less clear, with no obvious environmental, topographical or bathymetric hazards which could have channelled animals into shallow water, and no significant pathologically discernible abnormalities which could explain the stranding. Histological assessment of ears did, however, provide valuable information on the potential role of both acute and chronic sound exposure on cetacean hearing, and this investigation was the first time physical lesions were identified in mass stranding cases which would be consistent with chronic sound exposure. Whilst these findings did not provide a sole explanation for the MSE, both this and the 2011 investigations confirmed the need to better understand the role of underwater noise in any future mass stranding events. 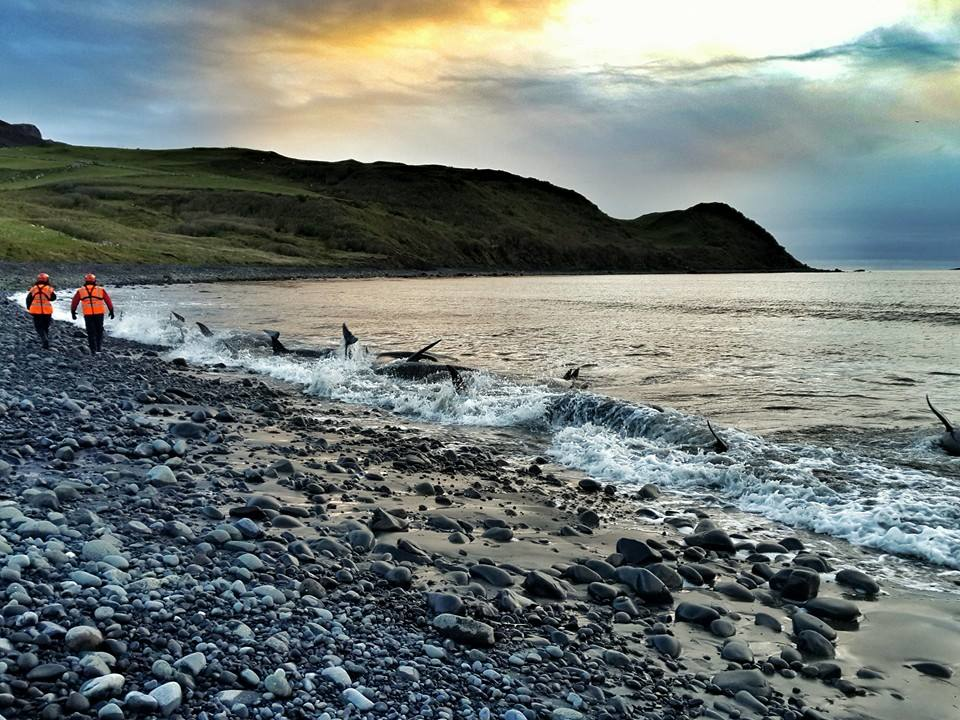 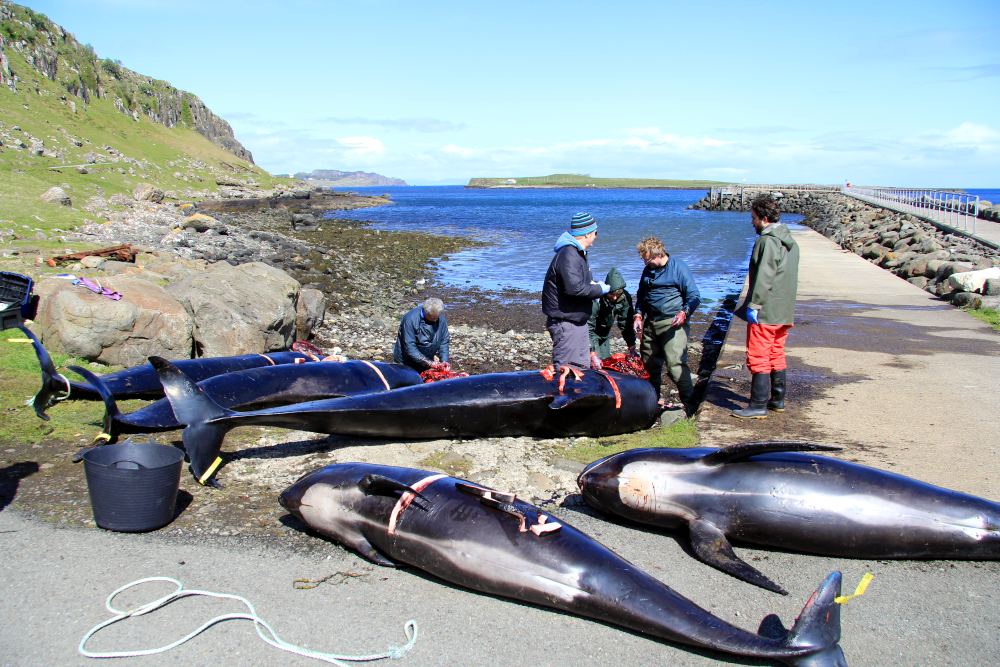 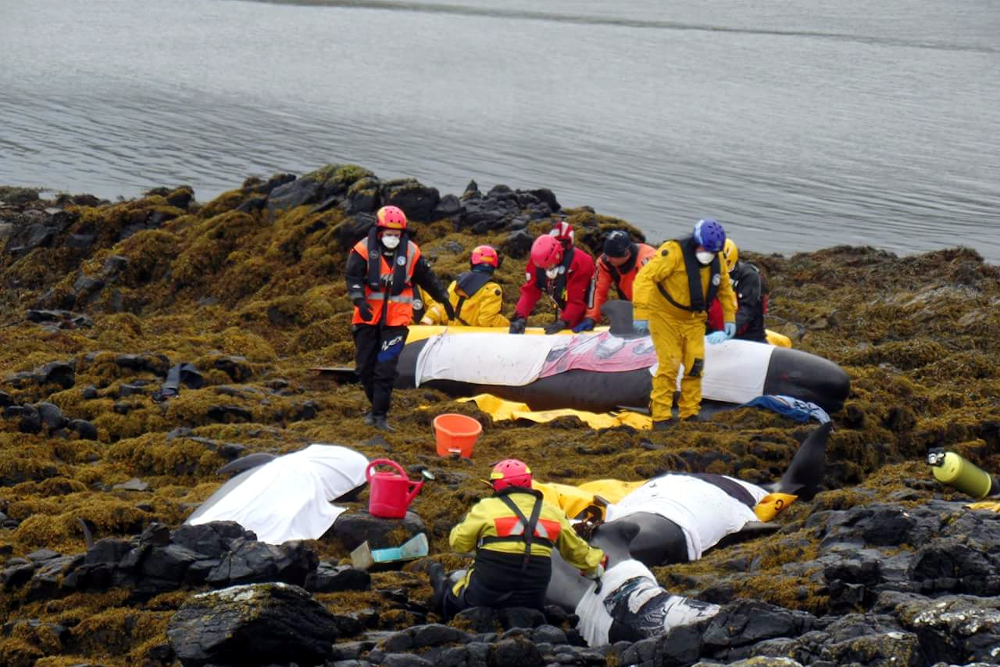 In early May 2017, a juvenile minke whale was reported as a suspected entanglement case on Tentsmuir beach. Entanglement, in either active creel fishing gear, or discarded, lost or abandoned gear or marine debris is the most common cause of death of baleen whales in Scotland and represents a significant welfare and conservation issue. SMASS necropsied this case on the beach and was able to confidently rule out entanglement as a cause of death. The animal did, however, have bruising and scrapes indicating it had stranded alive. It was in moderate body condition but had not recently fed and had a high parasite burden: Anasakis spp. nematode worms in the stomach, anaplocephalid Bolbosoma balaenae burden in the intestines, and a species of liver fluke known as Brachycladium goliath. The severity of this cumulative burden suggested the animal was immunocompromised that was clearly having an impact on its health. Examination of the brain yielded further information - here the cerebral ventricles were dilated and histopathology revealed a generalised, predominantly lymphoplasmacytic meningitis and encephalitis. Brucella pinnipedialis was isolated from brain, CSF and choroid plexus, indicating the animal was suffering from a severe neurobrucellosis. This was the first case recorded in this species, indeed in this family and sub-order of cetaceans. Interestingly, further screening of brain tissue also showed a 100% match to a gamma herpesvirus. Consequently, the ultimate cause of stranding in this case was a viral meningoencephalitis with a secondary, or synergistic infection by B. pinnipedialis. This is likely a result of primary immune suppression in this animal.

The necropsies that are carried out by SMASS provide a valuable record of the range of causes of death of the stranded animals. Many of these are from natural causes of various sorts such as bottlenose dolphin and grey seal attacks (on harbour porpoise), grey seal attacks on harbour seals and grey seal pups (so called corkscrew injuries), meningoencephalitis, and pneumonia. In other cases there is clear evidence that death was either due to bycatch in fishing gear or entanglement in lost or discarded gear. The proportion of deaths attributable to a direct anthropogenic cause is relatively small for some species. For example of the 266 harbour porpoise for which a cause of death could be established between 2011 and 2018, 12 were definitely attributed to bycatch, whilst over the same period 43 had succumbed to infectious disease and 72 to bottlenose dolphin attack. In contrast, however, of the 32 minke whales for which a cause of death could be established between 2011 and 2018, 20 animals (62.5%) died as a result of entanglement. Whilst overall the proportion attributable to bycatch and entanglement in this dataset appears relatively small, it is the most significant welfare issue affecting minke and humpback whales and in some regions the incidence rate is likely significant enough to also be causing conservation impact on local populations.

The above cases highlight the range of causes of death seen and demonstrate the need for detailed investigation of cases through comprehensive post-mortem examination and ancillary testing. Quantifying human impact on the marine environment is not just about identifying acute trauma cases, such as bycatch, it also requires, where possible, assessment of the cumulative effects of multiple, chronic, stressors. Factors such as noise or chemical pollution, habitat loss, prey depletion or wider impacts of climate change can all affect the health and resilience of marine mammals through increasing stress, lowering of immune function and increasing susceptibility to infections. The datasets generated by SMASS also provide an invaluable insight into the variety of species of marine mammal and other rare and elusive visitors to Scottish waters, highlighting and reinforcing the importance of the area for its biodiversity 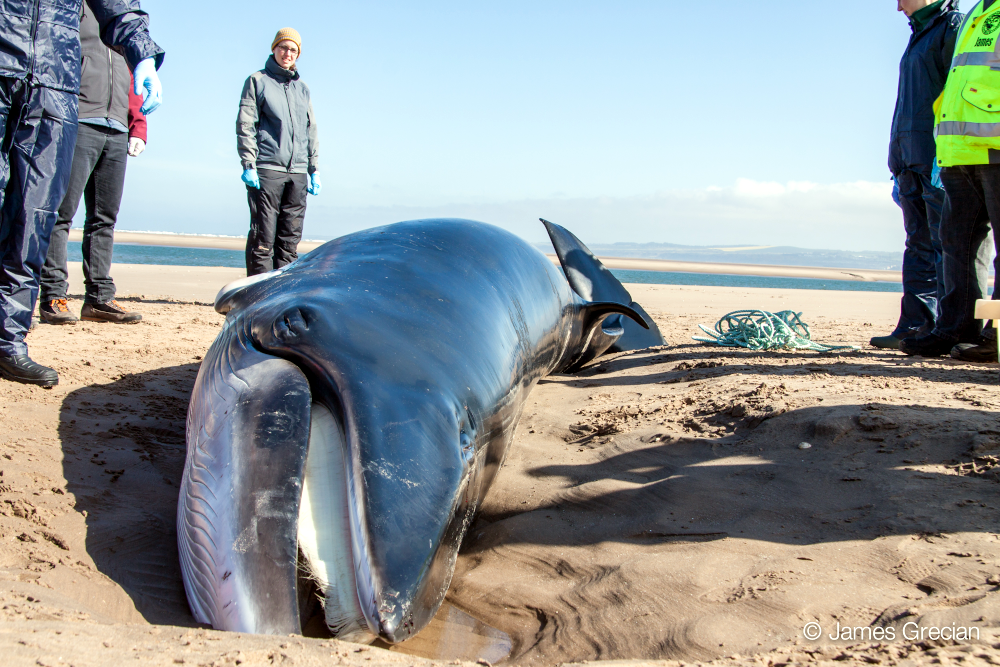