Dredging is key to keep ports open and provide for changes in ship size. In 2018, 4.2 million tonnes of dredge material was disposed at sea, this is over 250% higher than in 2014. This is due to an increase in the number of capital dredging projects in recent years. 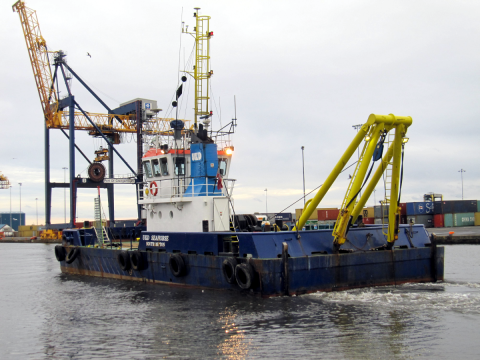 Dredging is needed to maintain the water depth required keep ports operating and this results in waste which must be disposed. Dredging and the deposit of dredged material at licensed disposal sites takes place all round the coast. Dredging is split into 2 main types:

Generally licences are for larger amounts than required to allow for flexibility in dredge campaigns. Dredging activity is expensive so ports will not dredge more than they have to, but often apply for more tonnage than they need in order to avoid paying for a second application fee. All deposit activity is subject to a marine licence from Marine Scotland under the Marine (Scotland) Act 2010.

During 2018 a total of 4,191,664 tonnes was dredged and deposited of a total of 13,084,316 tonnes that could be allowed under licence. The amount deposited in 2018 increased due to an increase in the number of capital dredging projects (Figure 1).

Dredged material must be assessed for chemical contaminants before it can be considered for deposit elsewhere at sea. 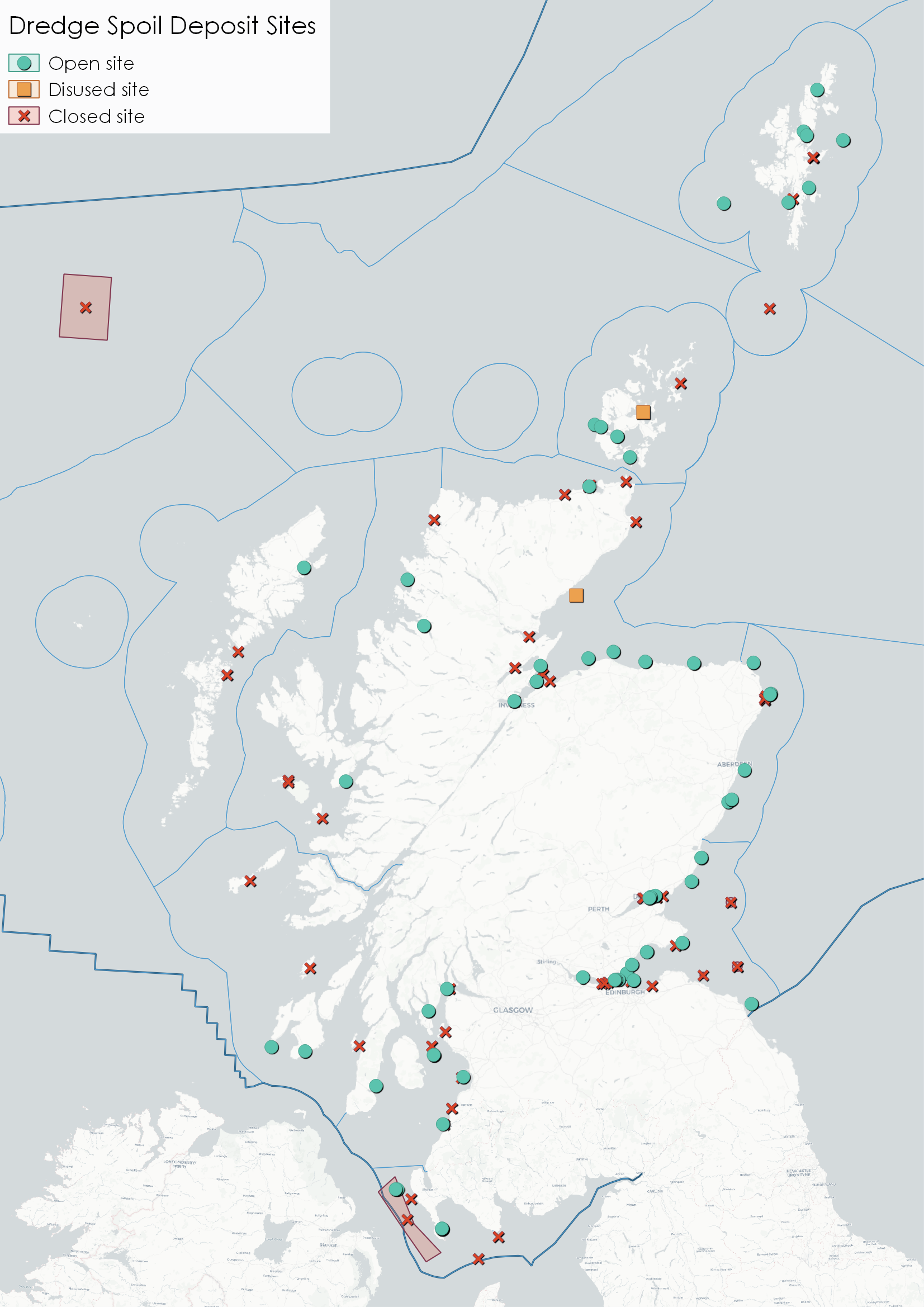 Since the 1980s deposit at sea of radioactive wastes (stopped in 1982), industrial wastes (1992), colliery minestone (1995) and sewage sludge (1998) has been progressively reduced, and is now prohibited. Only the deposit of dredged material from ports, harbours and marinas (Figure a) is presently allowed. This activity is essential to maintain navigation in ports and harbours as well as for the development of new port facilities. 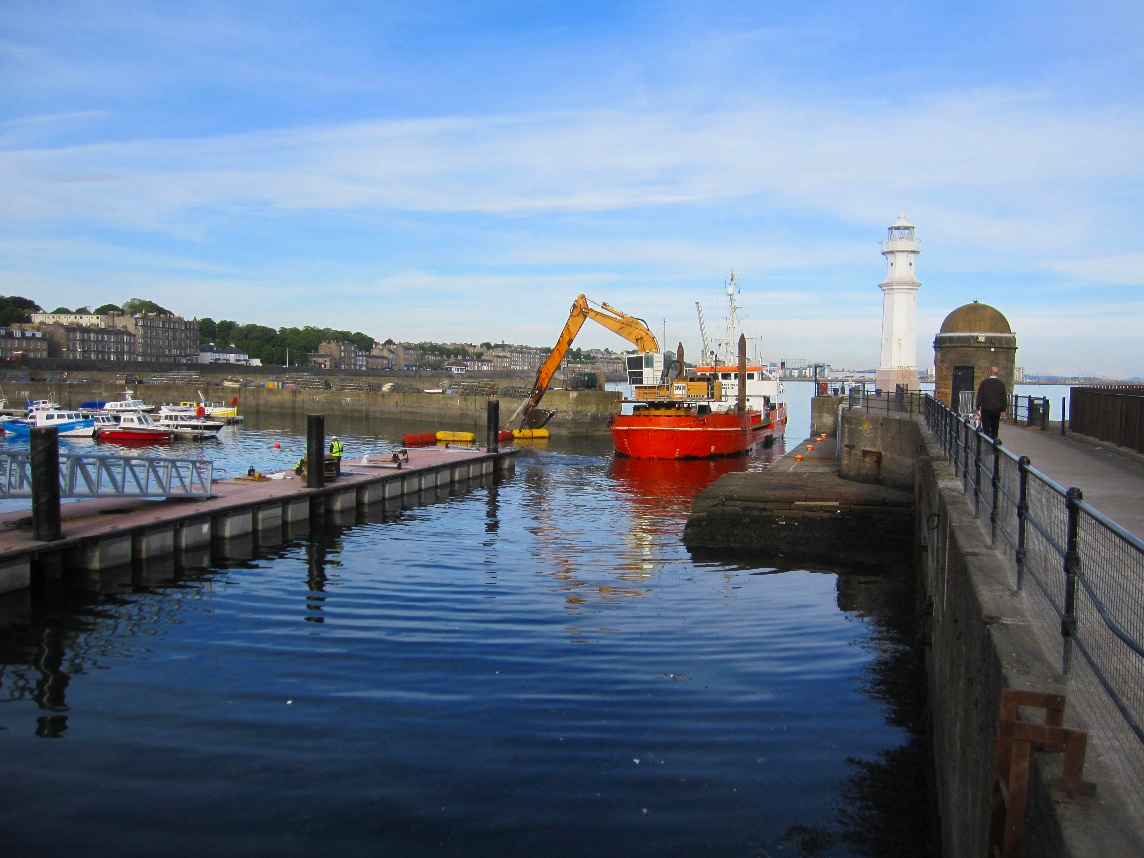 Figure a: Navigational dredging at Newhaven, Firth of Forth, prior to disposal at sea. © Forth Ports Ltd.

The aim is to minimise seabed deposit and seek alternative, beneficial use by conducting a Best Practicable Environmental Option (BPEO) assessment and considering practicable alternative options before granting a licence. Dredged material may be re-used for land reclamation, for example beneficial use of aggregates at the south harbour expansion in Aberdeen or beach nourishment where it is uncontaminated and physically suitable.

Most deposit occurs in the sea areas adjacent to the highest densities of human population and industry. Tonnages deposited are recorded by Marine Scotland and reported to OSPAR (Oslo Paris Convention) for international collation. Figure b identifies the spread of disposal amongst the Scottish Marine Regions (SMRs) for the period 2014-2018; Clyde (Figure c); Forth & Tay (Figure d); Moray Firth (Figure e); and the North East (Figure f) regions have the largest volumes. Figures for all SMRs are available on Marine Scotland Information Waste Disposal (Dredge Spoil Deposit) page. The amount of dredge spoil deposited at sea for a particular port will change. Harbours only undertake navigational / maintenance dredging when necessary to maintain a depth, which may not be every year. Capital dredging is associated with new harbour developments which by their nature are dictated by market forces. 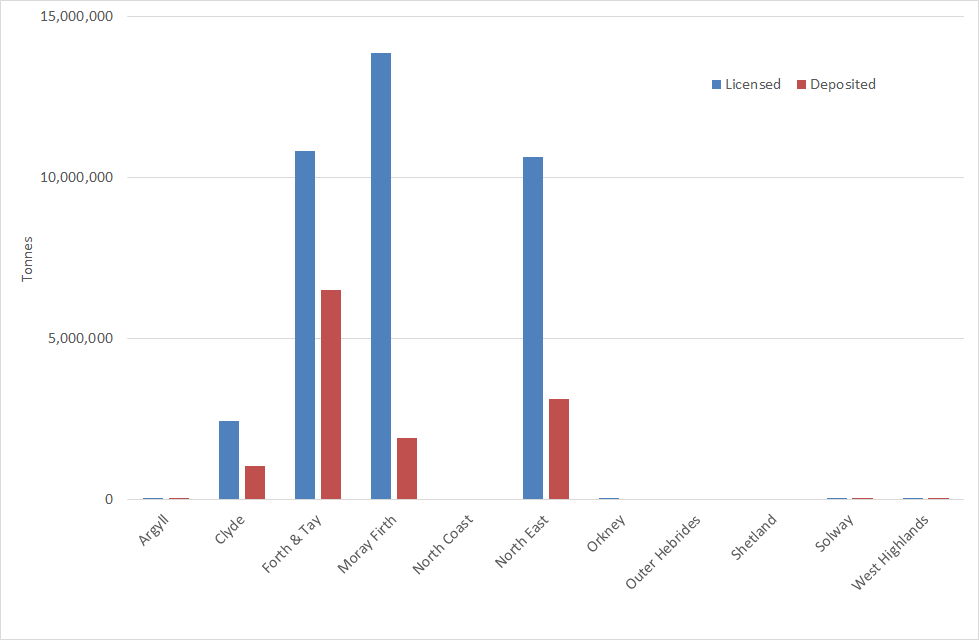 Figure b: Amount of material licensed and actually deposited (per Scottish Marine Region) (total from 2014-2018) in tonnes. Source: Marine Scotland. 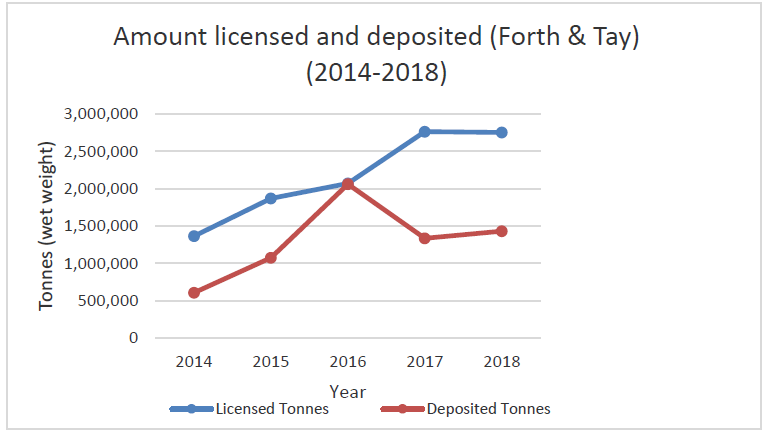 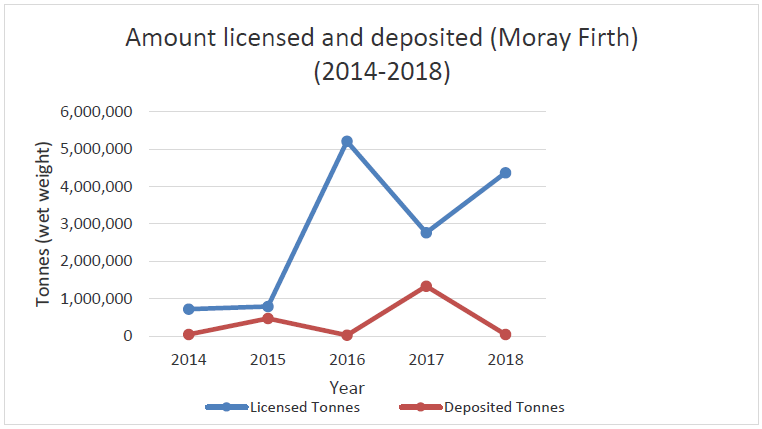 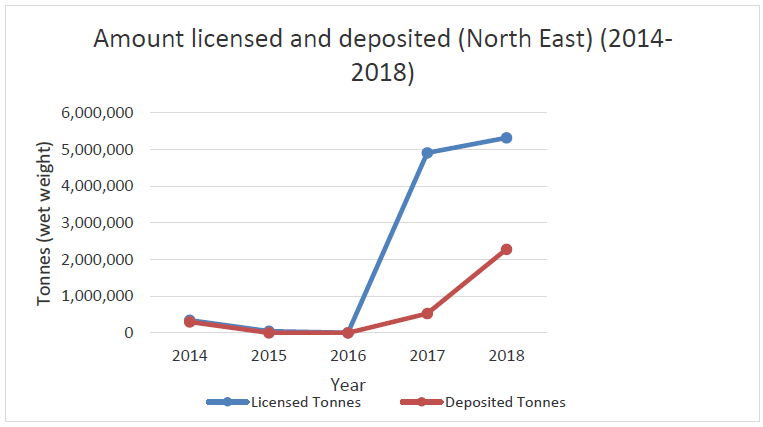 Sea deposit sites are selected based on a number of criteria including their location in relation to amenities and other uses of the sea in the area, economic and operational feasibility and physical, chemical and biological characteristics. A summary of sites currently or previously used for depositing dredged material is shown in table a. The closed offshore site in Bailey was only used for fish waste, but as discards are banned and industry best practice recommends against depositing things like scallop shells, it is no longer used.

Biologically inert or natural materials may also be considered for deposit. Fish waste (from land based processing) is sometimes disposed but this has not occurred in the period 2005- 2018.

Dredged material is assessed for contaminants before deposit to reduce environmental impacts. In general, dredged material with contaminant levels below a certain threshold can be disposed of at sea. Above this, but below a higher threshold, may require further consideration and testing before a decision can be made, whilst above the higher threshold there is a presumption against deposit at sea.

Dredging is an essential activity to keep ports and harbours open and it is therefore economically important.

It is not possible to isolate the Gross Value Added (GVA) and number of jobs associated with dredge spoil deposit. Dredging is included in the construction of water projects industry as it is too small to be assessed separately. However, it is clear that without dredging, supported by deposit at sea, access to ports and harbours would either be limited or face costly alternative means of disposal, which could affect the maritime transport sector’s contribution to the economy.

Dredged material can also save costs, for example when suitable material is used to assist with construction projects, such as the use in 2017 of navigational dredging for Aberdeen port expansion, or to replenish sand on beaches providing coastal protection and supporting recreational uses of the coastline, thus enhancing economic performance.

From 2014-2018, 89 licences were issued for the deposit of dredged material at sea. These were mainly for ports and generated a total licence revenue of £554,820 (Figure 4). The increase in income since 2016 is explained by increases in the amounts of dredged material licensed to be deposited at sea. 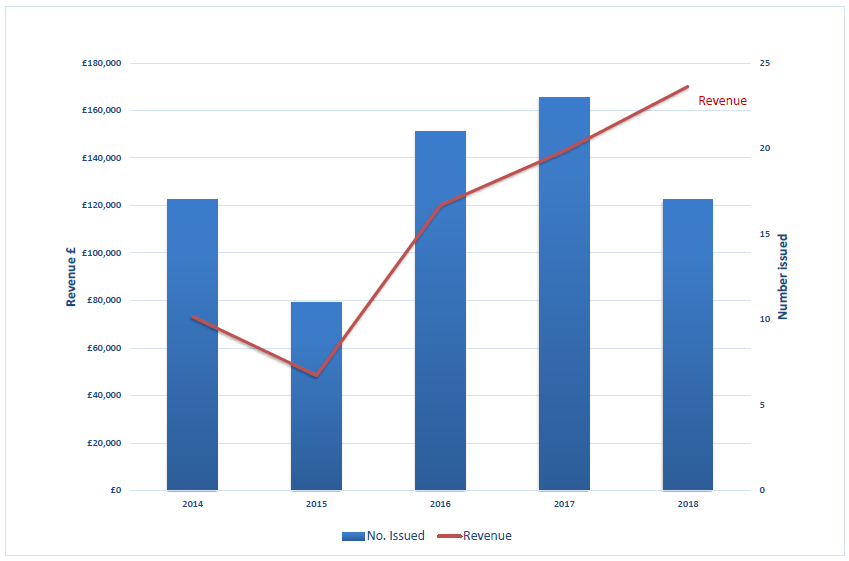 The tonnage licensed for disposal that is actually disposed of is provided by Scottish Marine Region (SMR) and provides an indication of the change in activity. While the arrow is determined by the change in actual dredged tonnage between 2014 and 2018, the values are sporadic and there are instances where there was zero dredge disposed in 2014 and 2018, with a consequent ‘no change’ arrow, which may mask activity between the beginning and end point. Figures c to f are therefore more informative than just the direction of travel arrow.

An OSPAR agreed list of marine pressures is used to help assessments of human activities in the marine environment. The marine pressure list has been adapted for use in Scotland via work on the Feature Activity Sensitivity Tool (FeAST). Waste disposal – dredge material activities can be associated with 21 marine pressures – please read the pressure descriptions and benchmarks for further detail.

Dredging and deposit will continue to be undertaken to maintain existing shipping channels and to improve, develop and protect the coastline. National Planning Framework 3 (Scottish Government, 2014) identifies future port-related developments to provide facilities for the renewable energy sector, for example. Associated dredging may be required.

Dredged material is increasingly being seen as a resource rather than unwanted excess sediment. Stakeholders are starting to explore using sediment for beneficial uses such as beach nourishment, habitat creation and land reclamation. This may result in lower amounts of dredged material being deposited at sea.

One example of using dredge material as a resource is Montrose Port Authority’s most recent dredge deposit licence. This included trials of depositing in Montrose Bay to try and provide nourishment to the local beach which is currently undergoing rapid erosion.

New dredging to re-open old ports or further develop existing ports could result in an increase in the amount of material dredged. As a consequence there may be a need to develop new sea deposit sites as existing sites reach capacity; or where there are no sites (such as Uig) or protected areas have been designated over existing sites (such as Wick and Ullapool).

The designation of protected sites is a potential challenge as existing deposit sites may not be able to be used and harbours will need to carry out detailed investigation work to support applications to designate new deposit sites.

The hydrodynamic nature of most deposit sites within Scottish waters results in the natural dispersion of finer material leaving only larger, bulkier material such as rocks and boulders. It is likely that there will be reduced contamination loads in dredge spoil because of greater control on leaching of contaminants from land-based industry and also from those using harbours.

There are no economic data available on dredge disposal, however information on the tonnage disposed can be used to indicate a change in activity.

Regional values for dredge disposal are sporadic and do not necessarily show a true trend. For this reason, trends are only supplied at a national level as this is less volatile.

Confidence is 2 stars ** (medium). Based on collected statistics with some quality issues.