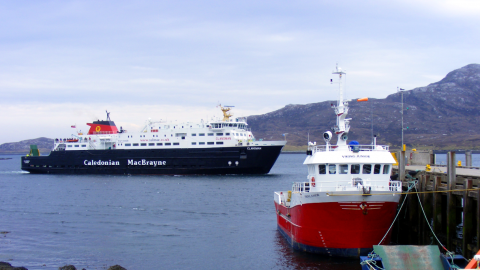 Ferries are an essential part of Scotland's transport network (Figure 1) whose services cover both island and mainland communities. This section covers the movement of people (passengers, cars and commercial vehicles) on ferries and cruise ships and the associated infrastructure.

Ferry passenger numbers increased by 6% from 9.7 to 10.3 million between 2014 and 2018. The number of vehicles that ferries carried, which includes cars, commercial vehicles and busses, increased by 12% from 3.0 to 3.5 million in the same period.

Transport Scotland is responsible for legislation, policy and guidance relating to Scotland's ferries, looking after services, ports, harbours and canals across the country. They are also responsible for some of the lifeline ferries and ports, including ferry networks connecting the islands and mainland communities. A lifeline ferry is a ferry that is required in order for a community to be viable. 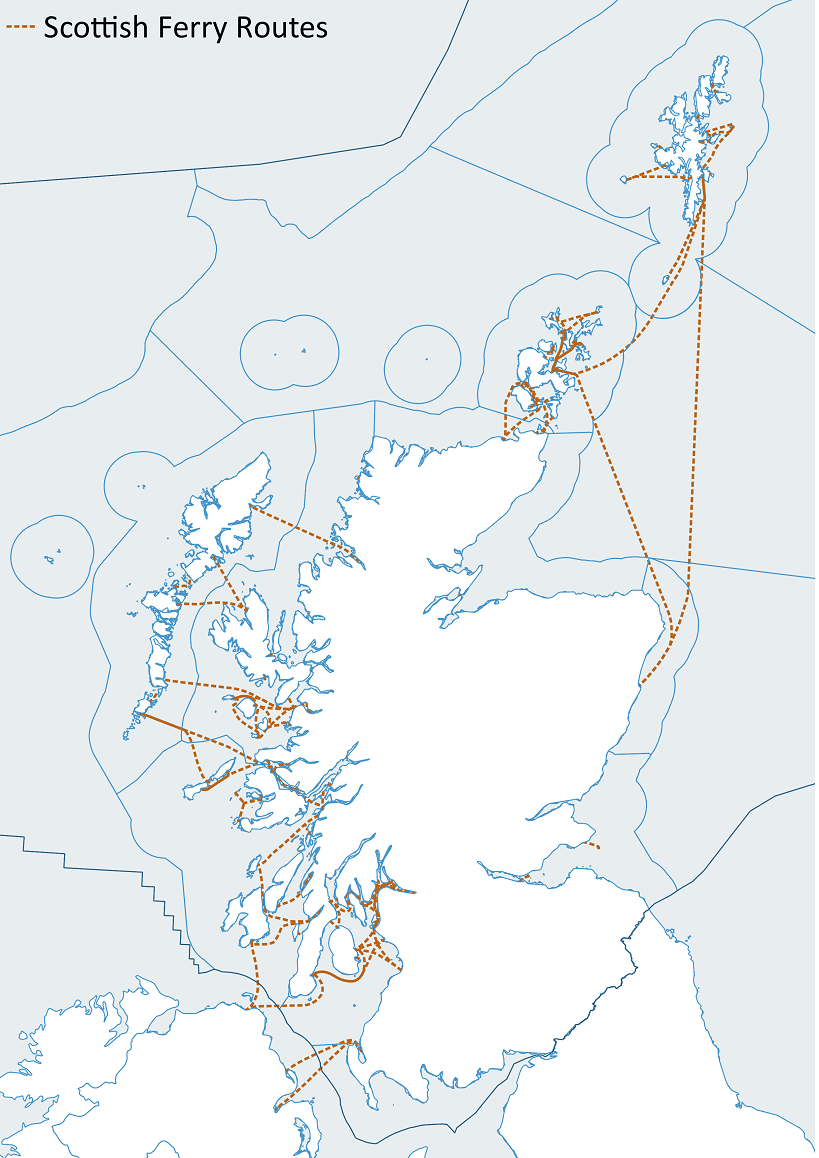 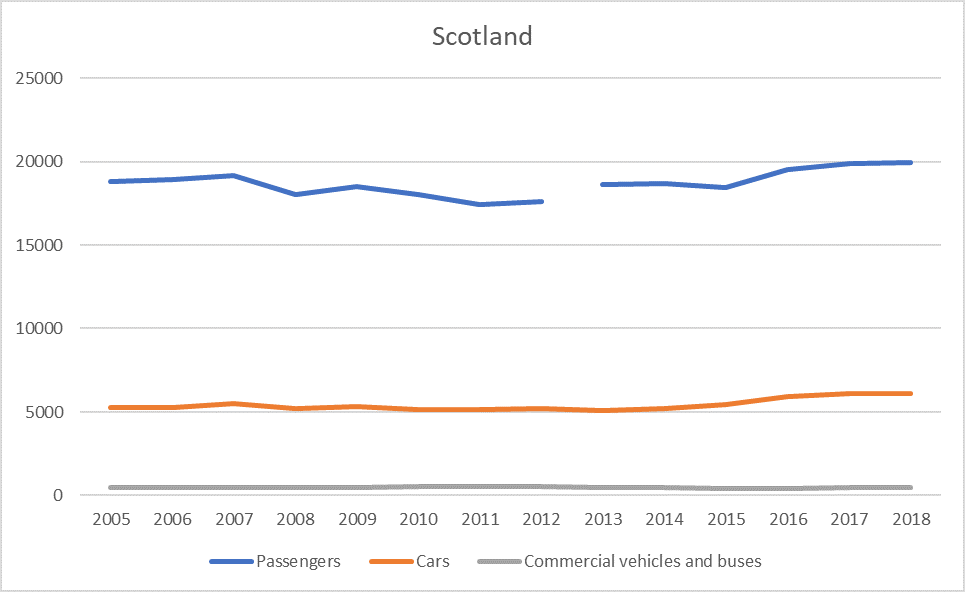 There are several types of ferry operating in and around Scotland, these include: lifeline services by Caledonian McBrayne (CalMac) and North Link and private services such as those to Northern Ireland. The Rosyth to Zeebrugge ferry route was the only one between Scotland and Europe until 2018, when it ceased operating.

Scottish Transport Statistics are presented by Transport Scotland for each Scottish Marine Region (SMR). Figure a and Table a show that the routes across all the SMRs are relatively stable in terms of passenger numbers. The exceptions are in the Forth and Tay Region where the passenger and car numbers on the Rosyth – Zeebrugge route fell to zero between 2010 and 2011. Also there was an increase in West Highland from 2013 with the inclusion of the Corran Ferry route between 2012 and 2013. No ferry routes start or terminate at ports in the Moray Firth SMR. 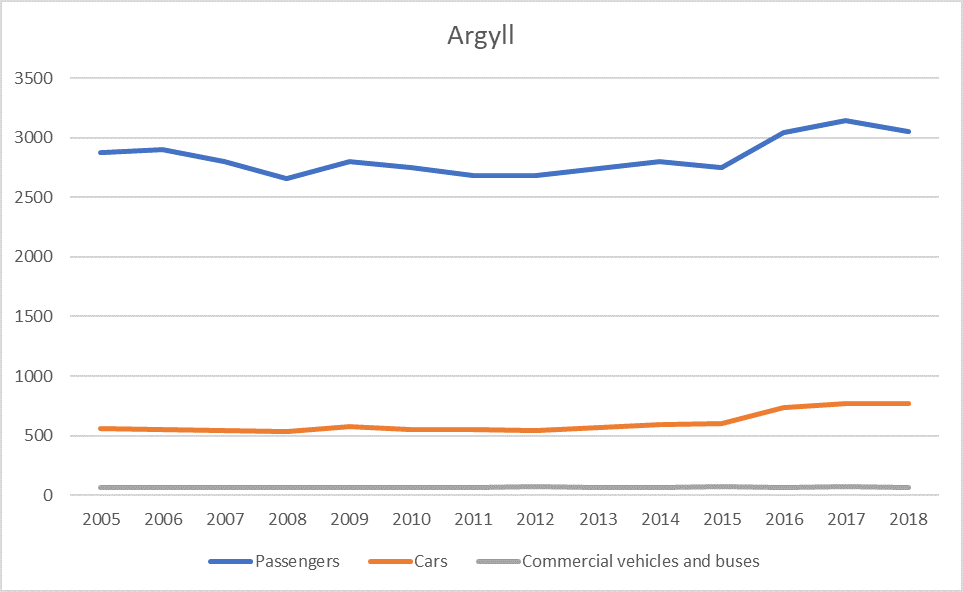 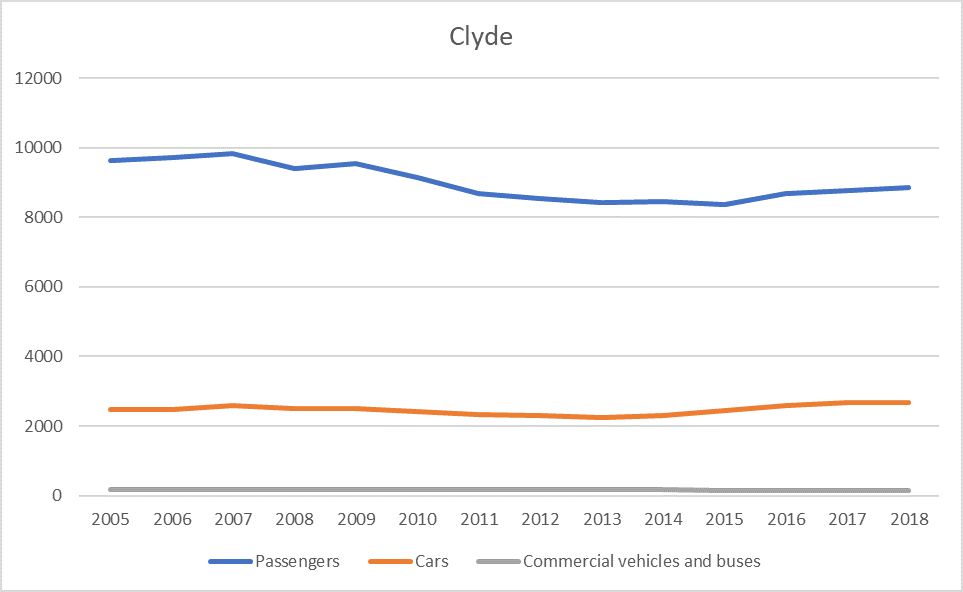 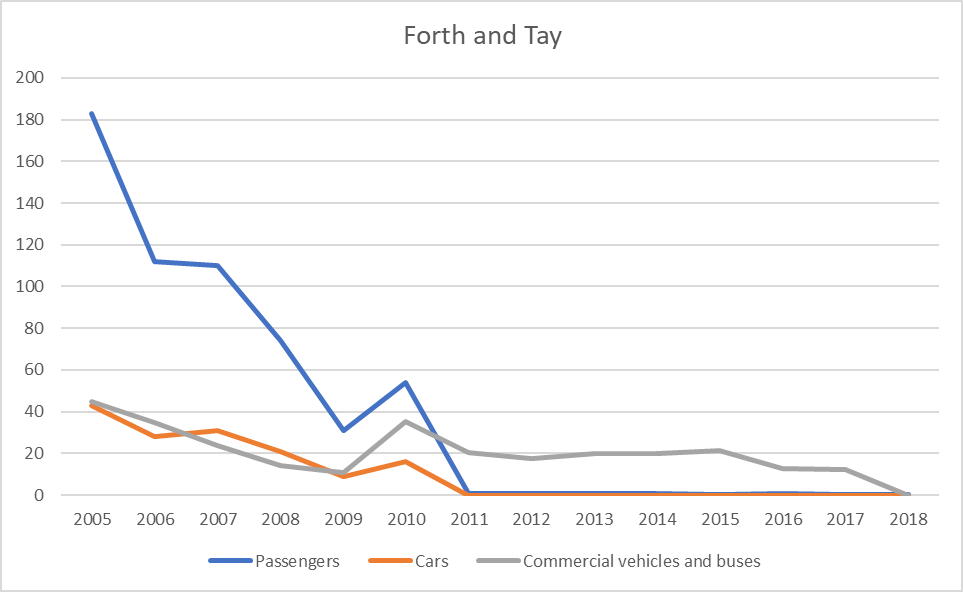 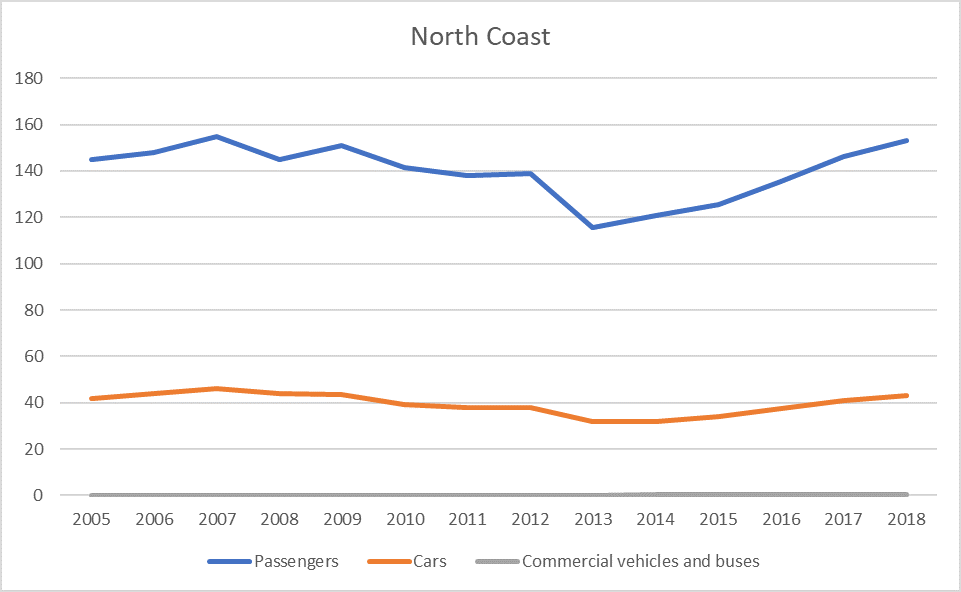 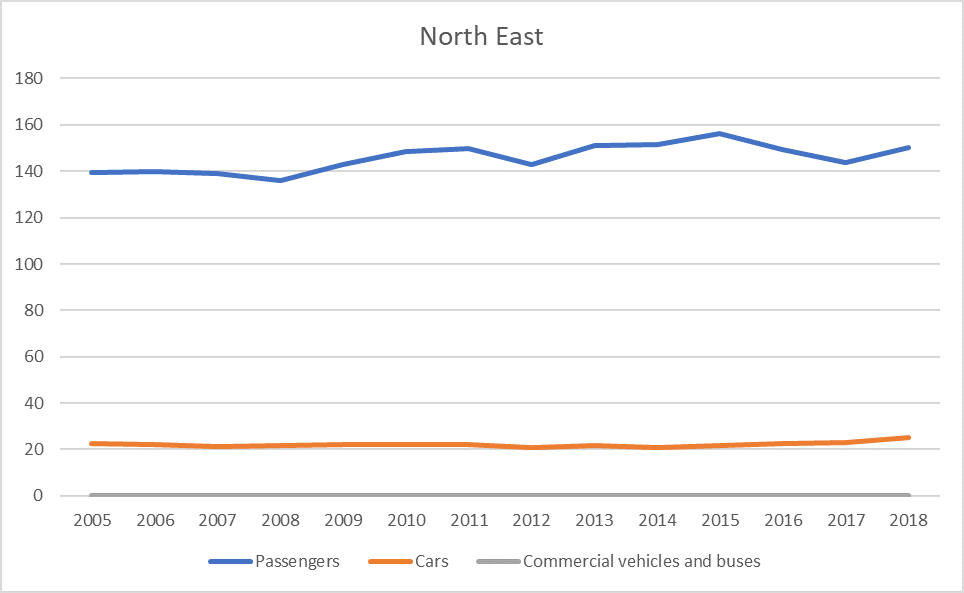 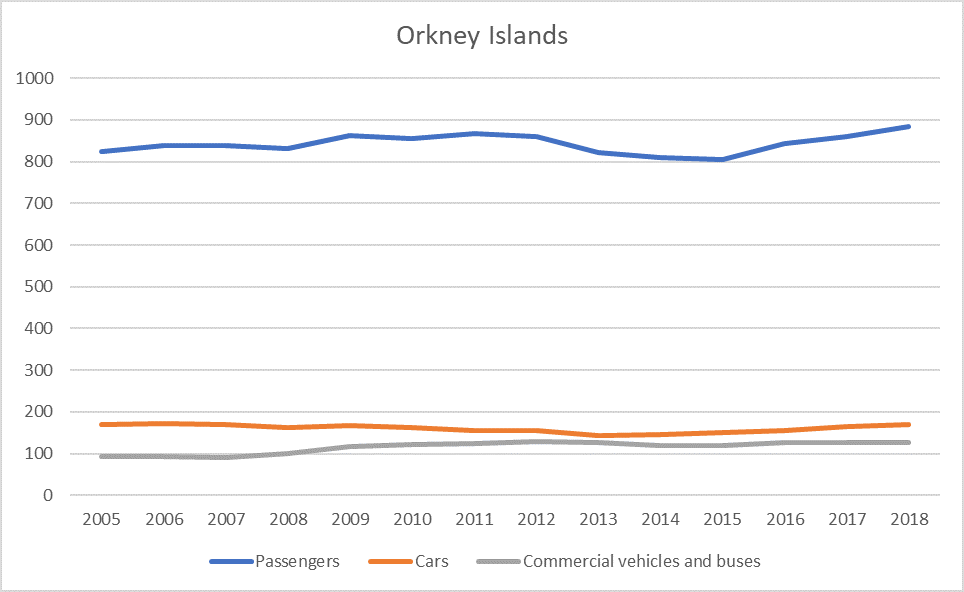 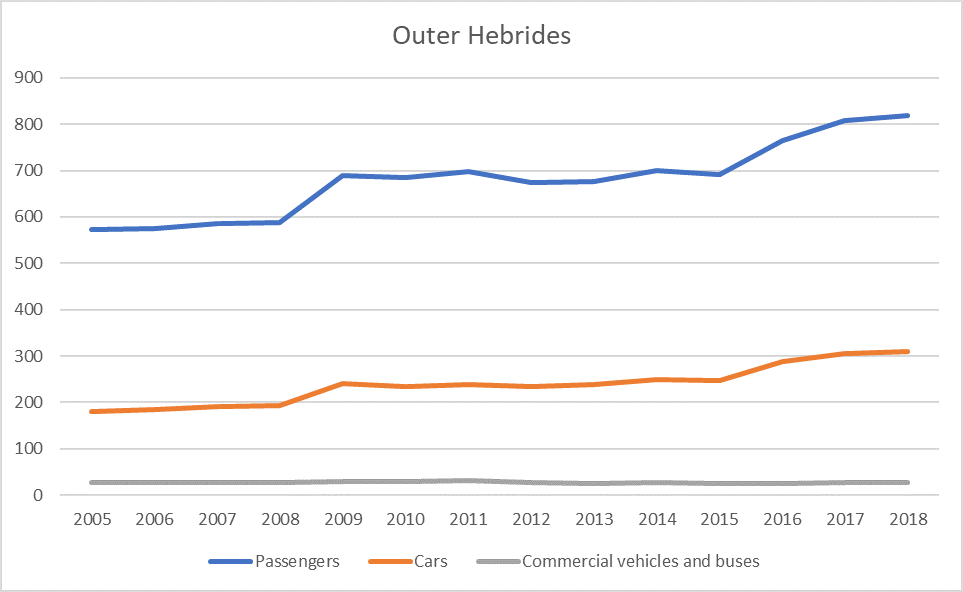 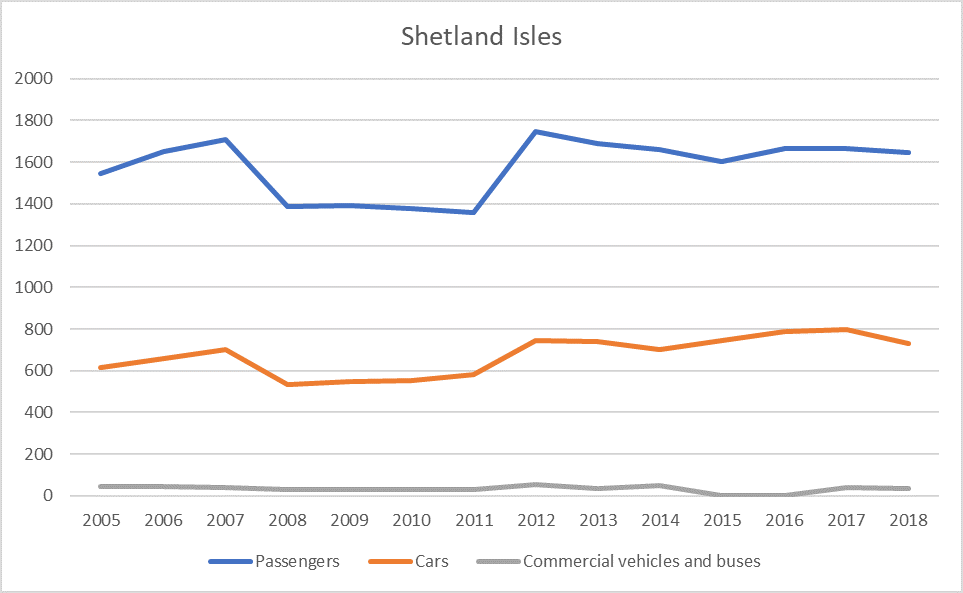 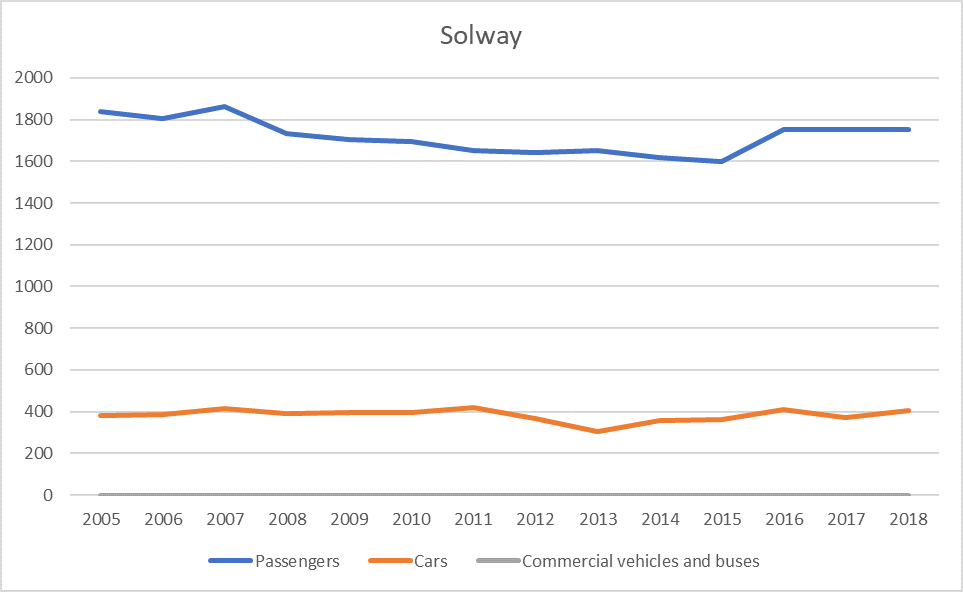 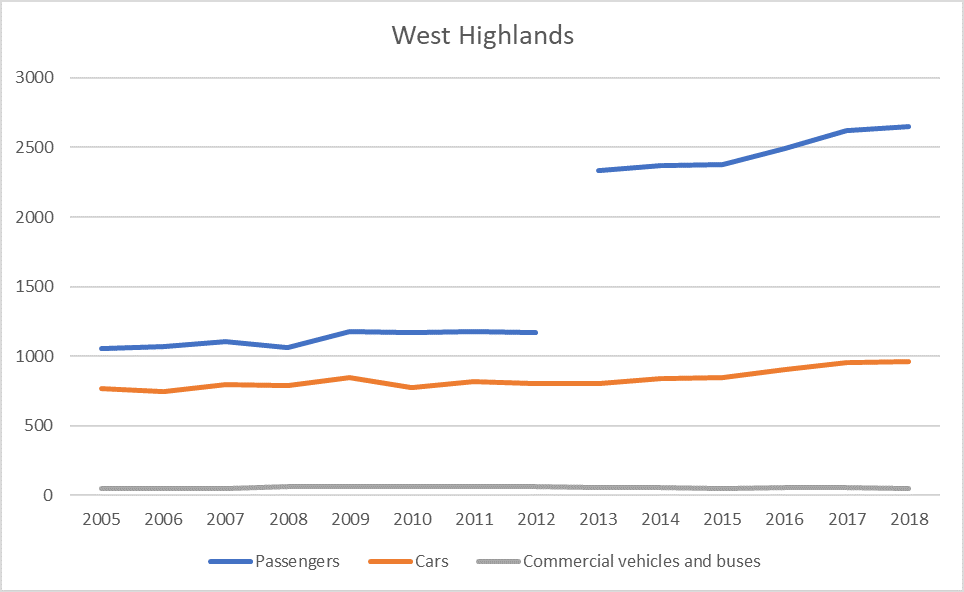 Source: Scottish Transport Statistics. Note: The graphs show all traffic within an SMR even where a route starts in one SMR and finishes in another. Totals from these graphs should therefore not be added together as there will be double counting. The passenger numbers for West Highlands include estimated passenger numbers for the Corran Ferry from 2013 onwards.

Note: For each SMR the table shows all traffic within it even where a route starts in one SMR and finishes in another. Therefore SMR numbers should not be added together as there will be double counting. The passenger numbers for West Highlands include estimated passenger numbers for the Corran Ferry from 2013 onwards. The Scotland number does not include this double counting and excludes Corran Ferry passengers.

In 2018, the busiest ferry route within Scotland in terms of passengers and vehicles carried is the service between Gourock and Dunoon, which carried 1,372,700 passengers. There were 634,300 cars carried on this route and 36,300 commercial vehicles and buses in 2018.

The second busiest Scottish ferry route over recent years in terms of passenger numbers has been the Cairnryan / Belfast route. This route carried 1.2 million passengers in 2018. Cairnryan/Loch Ryan is Scotland’s main port for carrying goods and passengers to Northern Ireland.

The second busiest route within Scotland in terms of cars carried is the Corran Ferry from Ardgour to Nether Lochaber operated by Highland Council. This route carried 261 thousand vehicles in 2018.

In 2011 the Rosyth ferry from the Forth and Tay region stopped carrying passengers, which explains the sudden drop in the chart. From 2013 the statistics included the Corran Ferry route for the West Highlands region for the first time.

Scottish Ministers carry out strategic planning, for example, the Scottish Ferry Services Ferries Plan (2013 - 2022) (Transport Scotland, 2012) sets out strategic guidance for ferry services in Scotland from 2013 to 2022. The Ferries Plan made recommendations regarding:

The following are examples of improvements completed since 2013:

Additionally, the need to improve ship efficiency and create cleaner solutions has been recognised. For example, recent additions to CalMac’s fleet include 3 diesel-electric hybrid ferries, using a combination of battery and conventional diesel power. These vessels have doubled the capacity of other vessels in their class, use up to 38% less fuel and produce 7,000 tonnes less CO2 than the vessels they replaced.

In April 2018 the new Brodick Ferry Terminal opened following a £30.7 million infrastructure upgrade project, which has transformed the harbour area. 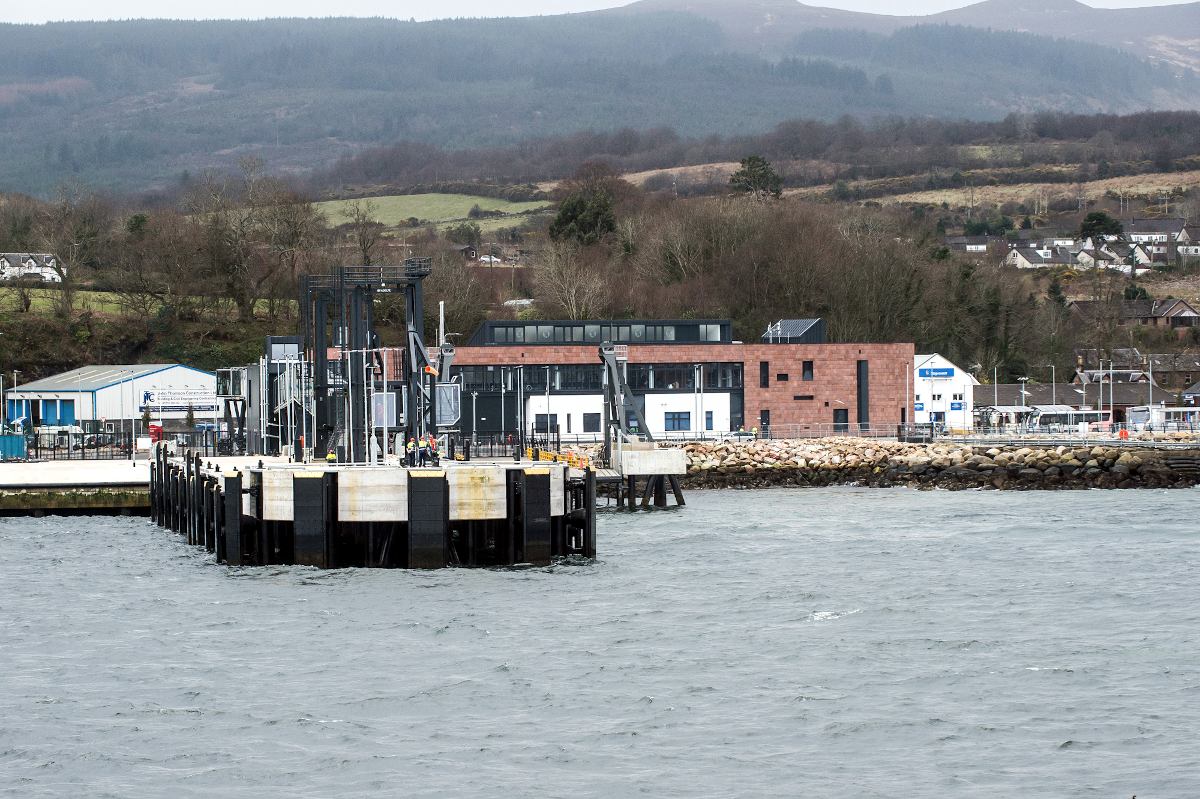 The project has created a flagship harbour for the Isle of Arran, a popular visitor destination, and provides facilities that will support the local economy and the island tourist industry.

Work to transform the harbour began in January 2016 and has delivered a 110 m, two-berth pier. It is designed to accommodate the new dual-fuel vessel, MV Glen Sannox, when it enters service, with a dedicated berth for PS Waverley that can accommodate other commercial vessels, including cruise ships. The two-storey terminal building houses the ticket office, toilets, harbour staff offices and a 120-seat departure lounge. Outside, there is an increased marshalling area featuring six lanes, offering parking for heavy goods vehicles and service vehicles; six bus stances with two modern shelters; and parking for up to 65 cars.

The new terminal building has photovoltaic roof tiles to generate electricity for the building, a biomass heating system fuelled by locally sourced wood chips, a natural air ventilation system, on-site segregated bicycle routes and storage, and electric vehicle charging points in the parking area. In addition, the majority of dredged and excavated material was re-used in the project as fill for the marshalling area, and excess material was donated to the Brodick Improvement Committee to use in the recovery of Brodick Beach.

Key ports for visiting cruise liners include: Kirkwall; Invergordon; Lerwick; Greenock; Leith; Rosyth; Queensferry; and Oban (Scottish Government, 2015). Many of these calls are transit calls, where the cruise ships uses the port, with passengers disembarking and embarking, but the port call is one of the stops on a voyage, not the start or end port. Turnaround Calls are those where cruise ships use the port as the start and/or end port of a voyage. The Orkney Islands is the most popular cruise ship destination in the UK, with over 140 cruise ships calling into Kirkwall and Stromness annually (Table b). Destinations include Iceland, Norway, Denmark and Germany as well as tours around Scotland’s Highlands and Islands.

Facilities for cruise ships have been improving, for example: 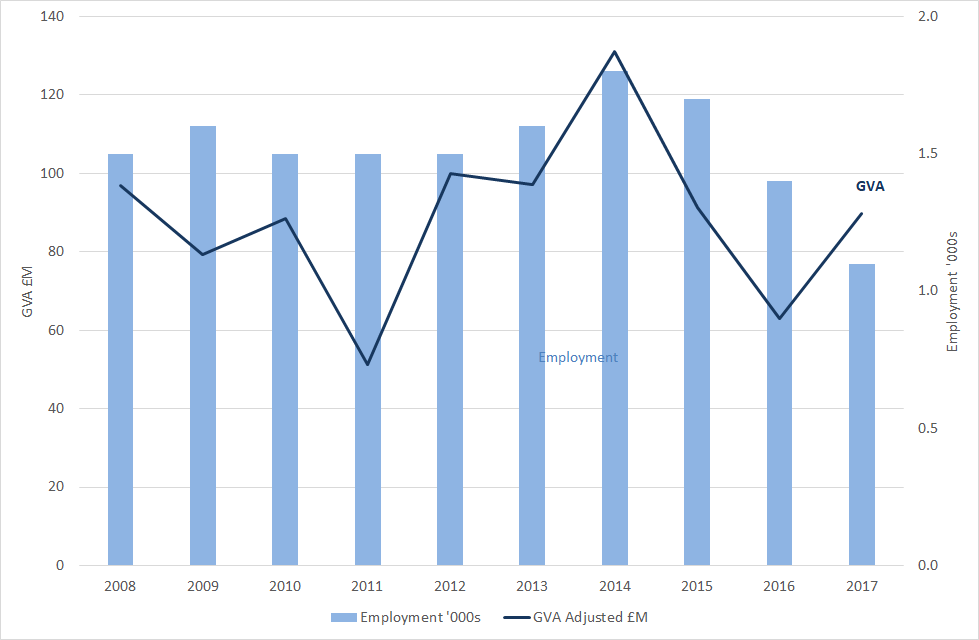 The source data underpinning the estimate of the economic contribution of Sea and coastal passenger water transport includes:

An OSPAR agreed list of marine pressures is used to help assessments of human activities in the marine environment. The marine pressure list has been adapted for use in Scotland via work on the Feature Activity Sensitivity Tool (FeAST). Maritime transport (passengers, ferries & cruise ships) activities can be associated with 27 marine pressures – please read the pressure descriptions and benchmarks for further detail.

The ‘Vessel Replacement and Deployment Plan 2016’ (VRDP) (Transport Scotland, 2018) outlines the future make-up of the ferry fleet serving the Clyde and Hebrides ferry service network. The overview includes how existing, planned and prospective vessels could be deployed across the Clyde and Hebrides ferry service network to deliver the Government’s Ferries Plan commitments and better meet forecast demand. The VRDP informs new vessel and harbour investments.

Ports are identifying the need for new development to support the growing number of cruise ships visiting Scotland. For example, Stornoway is in the process of developing a new multifunctional deep water berth which will accommodate the largest cruise vessels as well as general cargo, renewables industry, oil and gas and ferry infrastructure. It is scheduled to open in 2021.

At Greenock there is new pontoon under construction to accommodate cruise vessels, due to be open for the 2020 cruise season. An application is being made for a new cruise terminal with completion planned for the 2021 season.

Scrabster Harbour is currently developing plans for a new £18 million 250 m cruise berth for completion in 2021.

Inverness plans expansion of the port infrastructure that could accommodate specific requirements for cruise ships.

Lerwick Port Authority has plans for dredging at North Ness channel and Mair’s Pier to accommodate cruise ships over 240 metres as well as a long range capital project (in planning) for a town centre deep water berth, capable of accommodating large cruise ships. 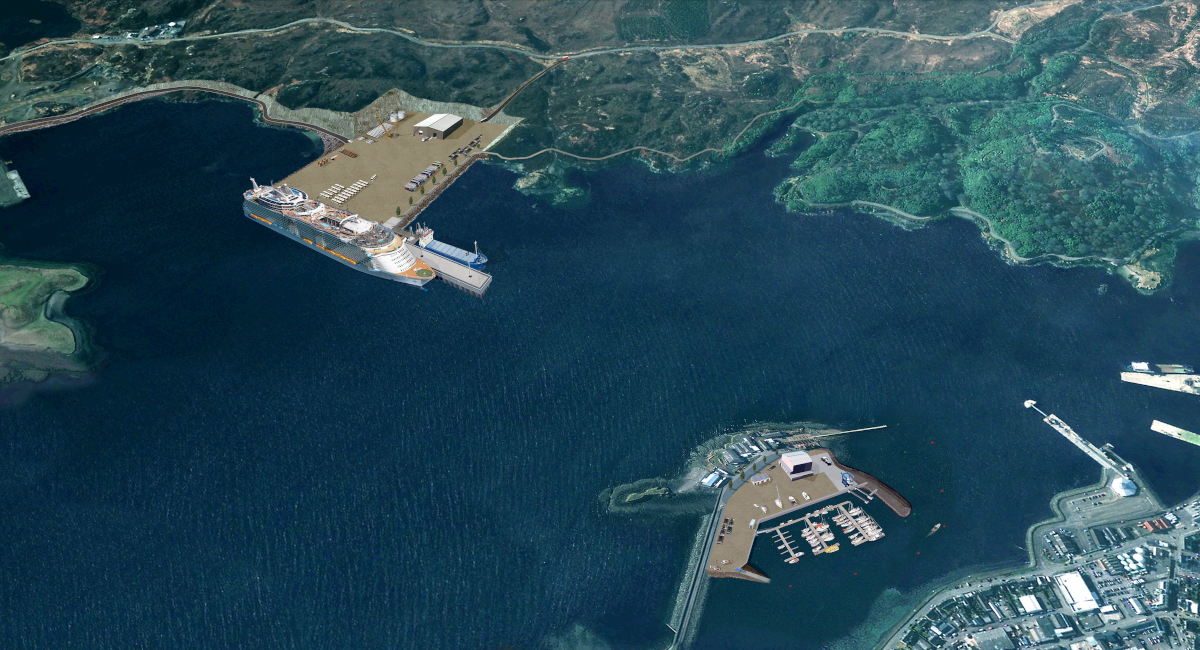 Trends for Scotland are based on ferry passenger numbers within Scotland and between Scotland and Northern Ireland or other EU countries (2014-2018). They do not include double counting.

Trends for Scottish Marine Regions are based on ferry passenger numbers (2014-2018). They include double counting as all journeys within an SMR are included even where a route starts in one SMR and finishes in another.

Confidence is 2 stars ** (medium). Based on published statistics supplied by ferry companies with some quality issues.