Scotland’s seas, lochs and coasts are integral to the Royal Navy’s operations, training and trials. HM Naval Base Clyde is the Main Operating and Support Base for the Royal Navy in Scotland. The £3.7 billion shipbuilding contract and the £1.3 billion infrastructure investment at HMNB Clyde will increase employment from the current 6,800 to 8,200 by 2022. 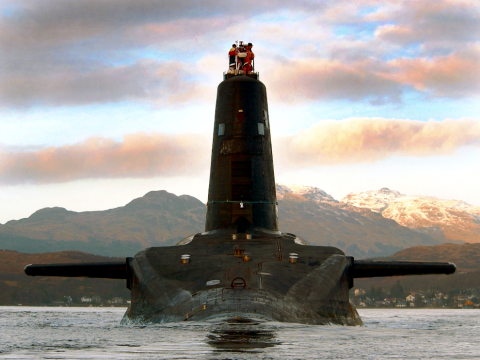 Most defence use of the coast and sea is by the Royal Navy (RN) (submarine base, jetties and exercise areas). In addition coastal locations for the Army (training camp and firing ranges), Royal Air Force (bases, coastal Air Weapon Ranges and Danger Areas) and Defence Test and Evaluation Ranges (used to trial weapon systems) are also important. Detailed information about the intensity of defence use of the seas is not available for reasons of national security. However, the firing ranges, for example, are not in constant use but vary depending on operational requirements. Areas where defence activity takes place are shown in Figure 1.

The Royal Navy’s primary bases/establishments in Scotland are Her Majesty's Naval Base Clyde (HMNB Clyde) (Figure 2), Royal Marine (RM) Condor (Arbroath) and HMS Caledonia (Rosyth). There are other Reserve Forces and University units and also test and evaluation facilities at the Inner Sound Raasay, Loch Goil and Loch Fyne.

By far the largest site is HMNB Clyde, which includes the port of Faslane and the Royal Navy Armament Depot at Coulport. It is home to the UK’s strategic nuclear deterrent and attack submarines, Mine Countermeasures Vessels and Patrol Boats. By 2020 it is due to become home to all the UK’s submarines. The Royal Marines’ 43 Commando (Fleet Protection Group) and Northern Diving Group are also based at Faslane. NATO (The North Atlantic Treaty Organization) is an intergovernmental military alliance between 30 North American and European countries. 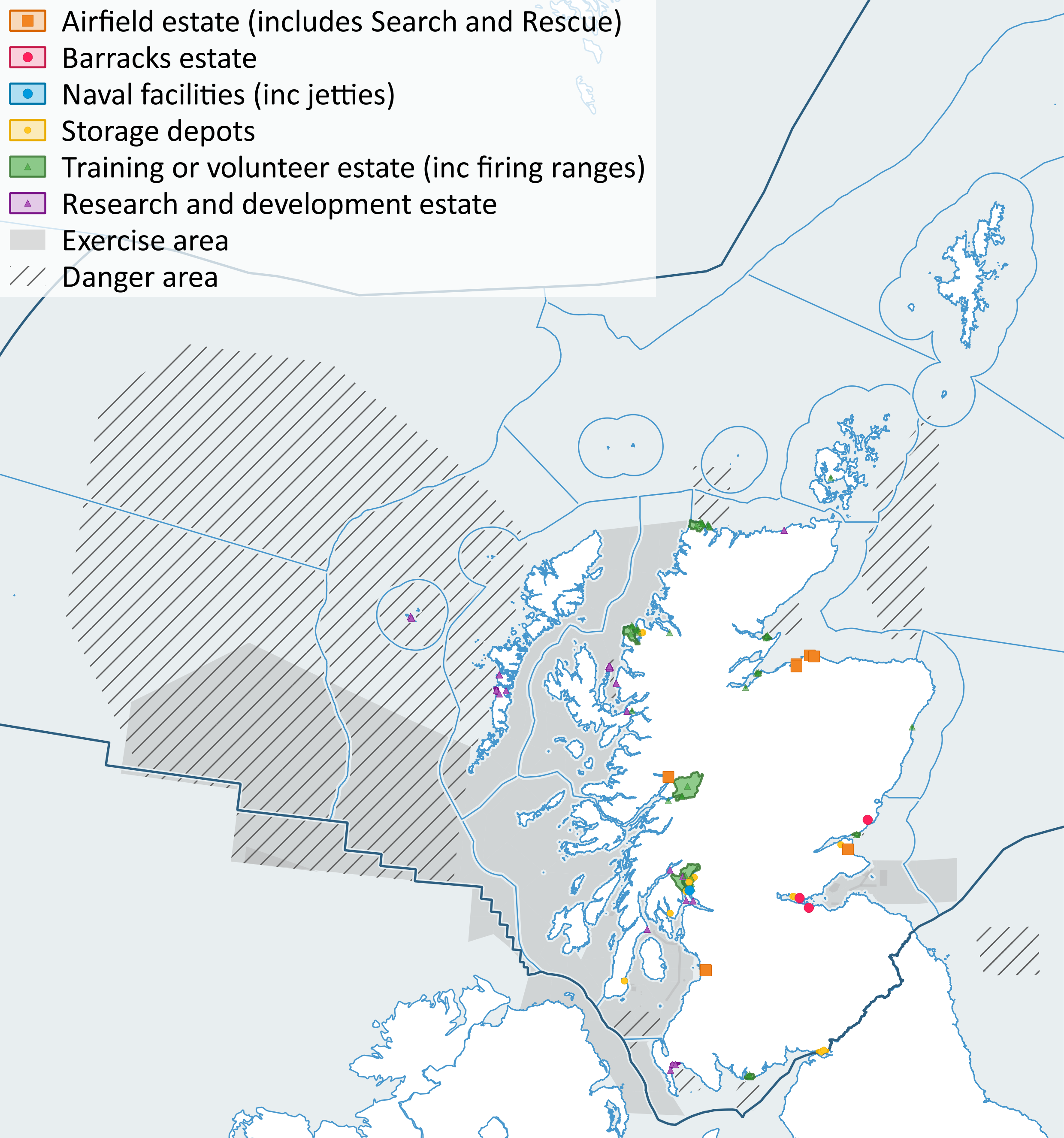 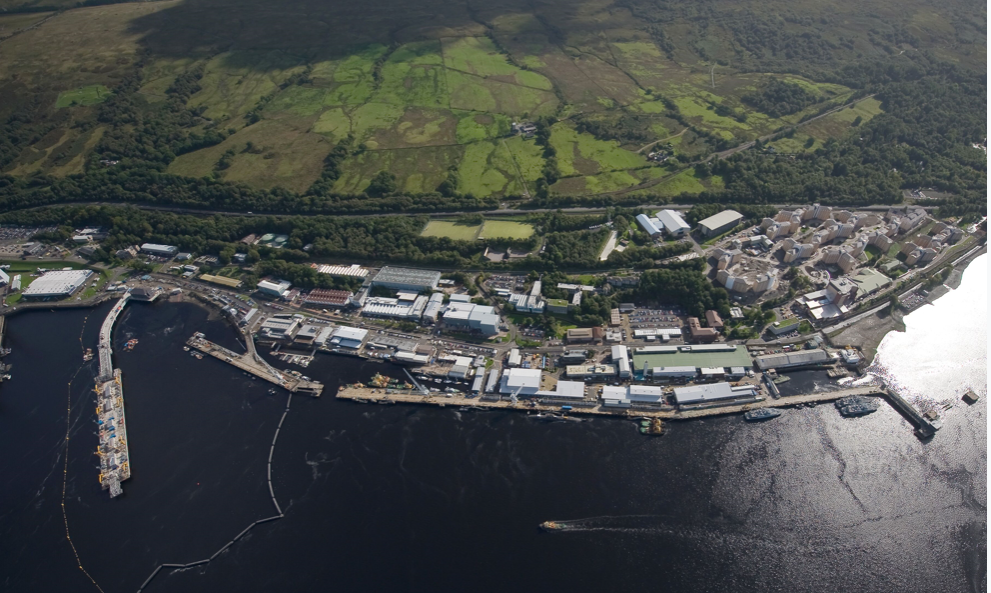 HMNB Clyde has developed from a military port established in World War II to becoming the Single Integrated Operating Base for all UK submarines (by 2020). It is one of the largest single-site employers in Scotland.

The largest exercise in Scotland is the biannual ‘Joint Warrior’, which is primarily conducted off the west coast. In recent years these exercises have typically involved around 10,000 military personnel, 35 warships, 5 submarines (Figure a shows example of such) and 59 aircraft and helicopters. Countries including Belgium, Canada, Denmark, Estonia, France, Germany, Italy, Latvia, Lithuania, the Netherlands, Norway, Spain and the US have participated with many of the ships making port visits at Leith, Glasgow and Faslane. Ahead of the Joint Warrior exercises the Ministry of Defence alerts appropriate stakeholders to details of their intended operations and publishes details on their web site. 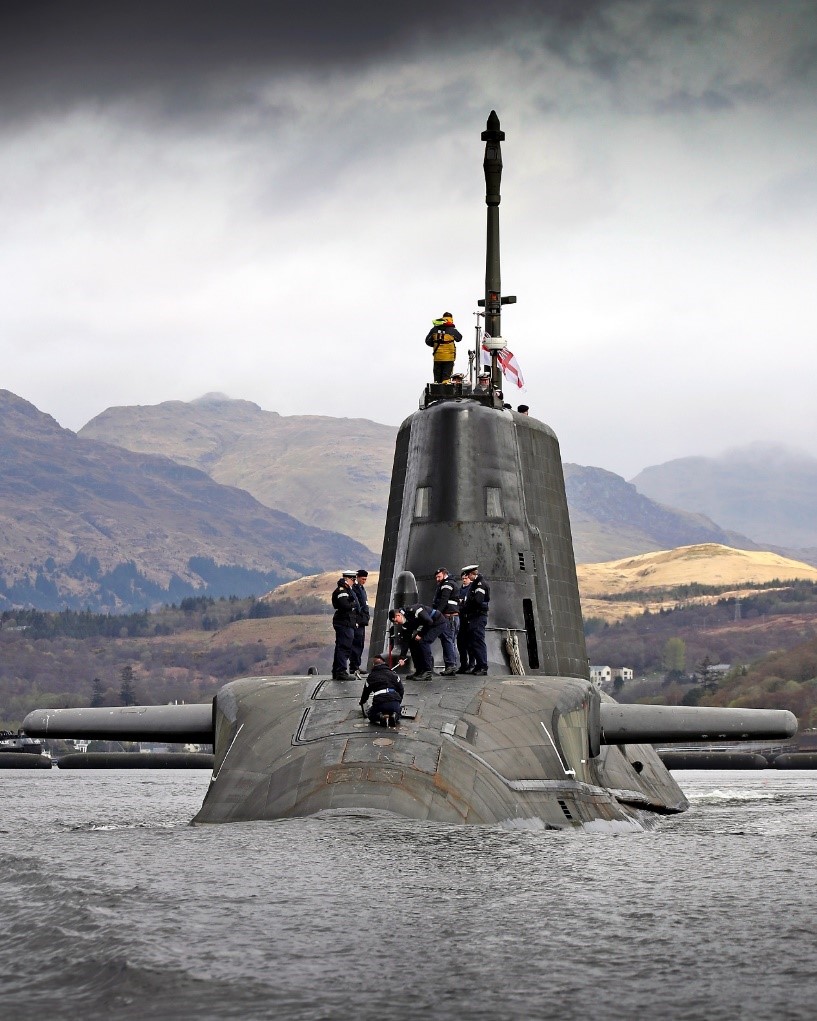 Figure a: Astute class submarine in the Clyde. 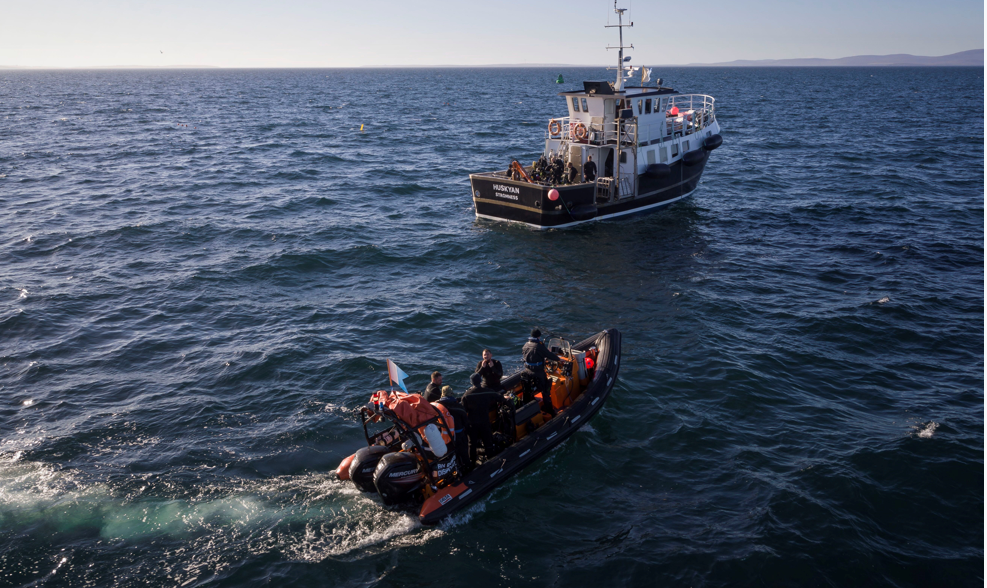 Figure b: Naval dive group active at the site of the Royal Oak, Scapa Flow.

At 1 April 2019, 13,690 military and civilian Ministry of Defence personnel were based in Scotland. Of these, 4,010 were civilian and 9,680 were military (Figure 3). 36% of all MOD personnel were based in Argyll & Bute and 19% in Moray. As no specific defence related gross value added information is available, employment can be used as a proxy measure of economic contribution. Between 2014 and 2019, the number of personnel based in Scotland decreased by 6%, from 14,510 on 1 April 2014.

The MOD spent nearly £1.65 billion with Scottish businesses in 2017/18, supporting an additional 10,000 private sector jobs. This expenditure has shown steady growth for the fourth year running, averaging a yearly increase in total expenditure of 4.2% since 2013/14. This is due to a continued growth in contract payments across the board,  rather than one particularly high value contract (UK Government, 2019).

A £1.3 billion of Defence investment in infrastructure, from 2017, (UK Government, 2017a) is already in train to improve facilities at HM Naval Base Clyde. Construction of an Escape and Rescue facility is well advanced, and the building of new naval schools and training facilities is underway.

The Type 26 Frigate manufacture Batch 1 contract was signed in June 2017 at a value of £3.7 billion and the first two ships, HMS Glasgow and HMS Cardiff, are under construction at Clyde. The orders for five Royal Navy Offshore Patrol Vessels and this first batch of three Type 26 Frigates have secured the long-term future of shipbuilding at Govan and Scotstoun (Clyde).

The Queen Elizabeth class aircraft carriers are the biggest and most advanced warships ever built for the Royal Navy. The second of the Royal Navy’s new Queen Elizabeth Carriers, HMS Prince of Wales, is now complete and was fitted out in the Babcock shipyard in Rosyth by the Aircraft Carrier Alliance. Although both of the Royal Navy’s new aircraft carriers have been assembled at Rosyth (where 1,700 people were employed in completing HMS Prince of Wales), the scale of the project means that construction has involved five shipyards in addition to Rosyth (Glasgow, Appledore in Devon, Hebburn in Tyneside, Birkenhead in Merseyside, Portsmouth). 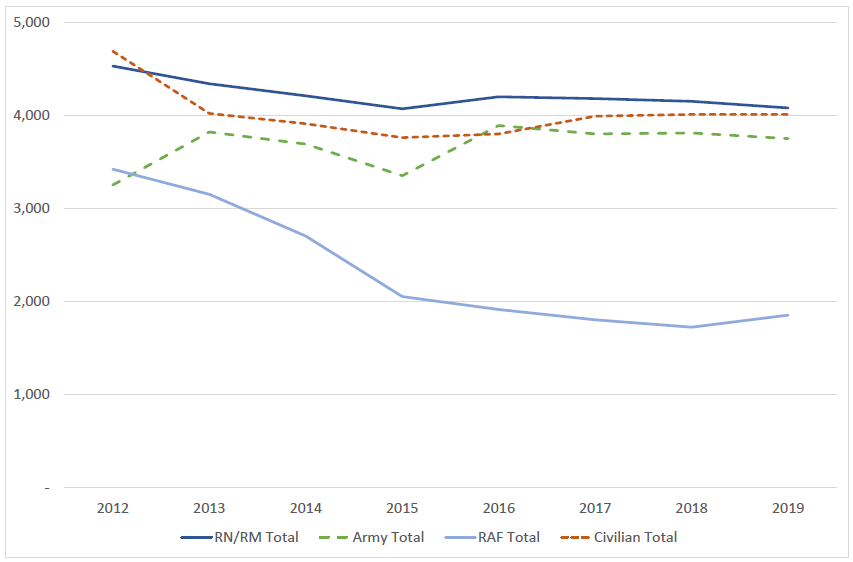 The trend assessment is based on the change in the number of personnel (military and civilian) in each local authority between 2014 and 2018. This value is used as a proxy for defence economic activity in the absence of being able to determine specific defence related Gross Value Added (GVA).

An OSPAR agreed list of marine pressures is used to help assessments of human activities in the marine environment. The marine pressure list has been adapted for use in Scotland via work on the Feature Activity Sensitivity Tool (FeAST). Military activities can be associated with 20 marine pressures – please read the pressure descriptions and benchmarks for further detail.

The Joint Warrior exercises are expected to continue as will everyday use of the coasts and seas by the various elements of the Ministry of Defence.

As part of the £1.7 billion of investment in infrastructure, from 2017, in Scottish military bases (UK Government, 2017b), £1.3 billion is being invested in facilities to improve HMNB Clyde. Improvements include the construction of a Submarine Escape and Rescue facility and the building of new naval schools and training facilities. The number of people employed at HMNB Clyde (military and civilian) will increase from the current 6,800 to 8,200 by 2022 (Royal Navy press release, February 2017).

Shipbuilding work has commenced on the first batch of three (of eight) Type 26 Frigates at Govan and Scotstoun (Clyde). A contract for the second batch of five ships will be placed in the early 2020s. Work is expected to be complete in the mid-2030s.  These contracts along with the orders for five Royal Navy Offshore Patrol Vessels will sustain some 1,700 jobs in the Scottish shipyards and a further 2,300 jobs throughout the wider UK supply chain until the 2030s.

In November 2019, Babcock was awarded the £1.25 billion contract for five new Type 31 frigates, to be assembled at Rosyth. 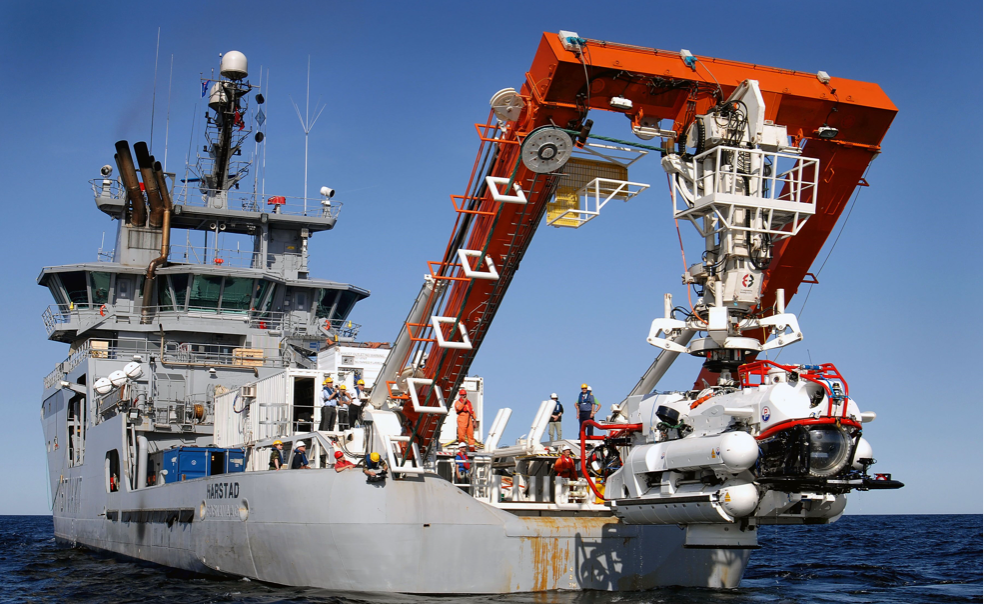 Source is published statistics from MOD. While the Gross Value Added (GVA) is not available, the staff employed (MOD personnel number) is a good proxy for defence ​economic activity and is attributed to local authorities.

Change in the total number of military and civilian staff, by local authority, 2014 to 2018.

Grey cells where no MOD personnel were employed in 2018.

'No change' arrows used where change is less than 5%.