All outfalls, waste water treatment and industrial effluent, are subject to strict environmental control and the volumes discharged are small compared with the receiving sea area. Improvements in data systems and reporting have increased the number of outfalls reported since the 2011 assessment. All Scottish Marine Regions have outfalls of one type or another. 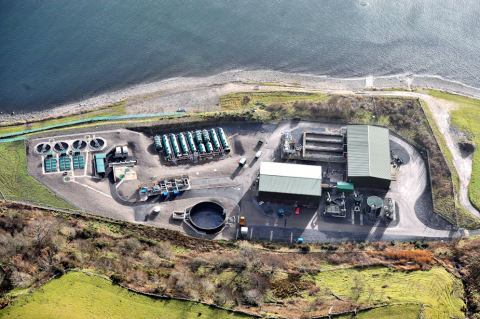 Outfalls to the marine environment fall into three categories:

These categories of outfall also discharge to the riverine freshwater environment which eventually reach the sea. WWT is designed to process waste water whilst protecting the environment and maintaining public health.

All sewerage systems that also collect rainwater (combined sewers) need overflow outlets (combined sewer overflows) that deal with the extra water collected during some rainstorms. Without these safety valves there would be a flooding risk at both the sewerage works and in other properties. Sewage in these overflow discharges is diluted with significant amounts of rainwater.

Information on emissions is also reported to the Scottish Environment Protection Agency (SEPA) as a requirement of the Scottish Pollutant Release Inventory (SPRI).

Details of the chemicals monitored in the seas, which can be released from both waste water and industrial outfalls, are in the Clean and safe section.

Note: In exceptional circumstances (i.e. large storms) Secondary or Tertiary treatment may be bypassed and untreated or only primary treated waste released. 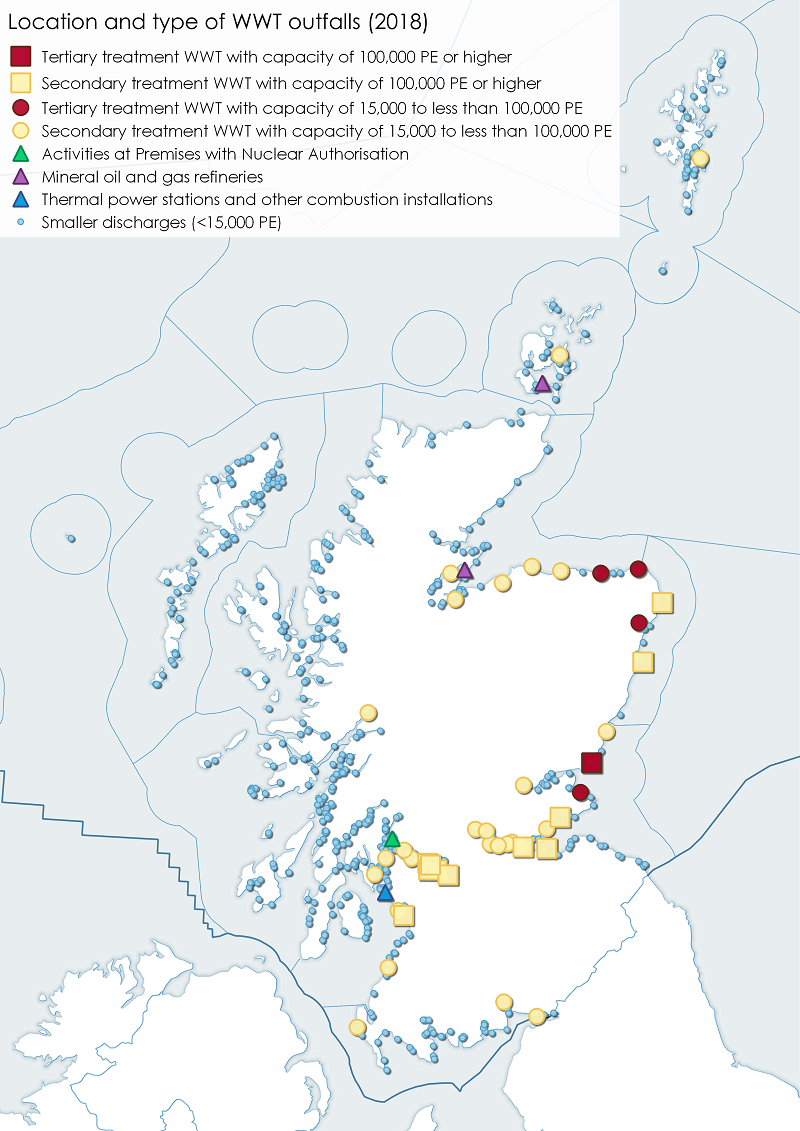 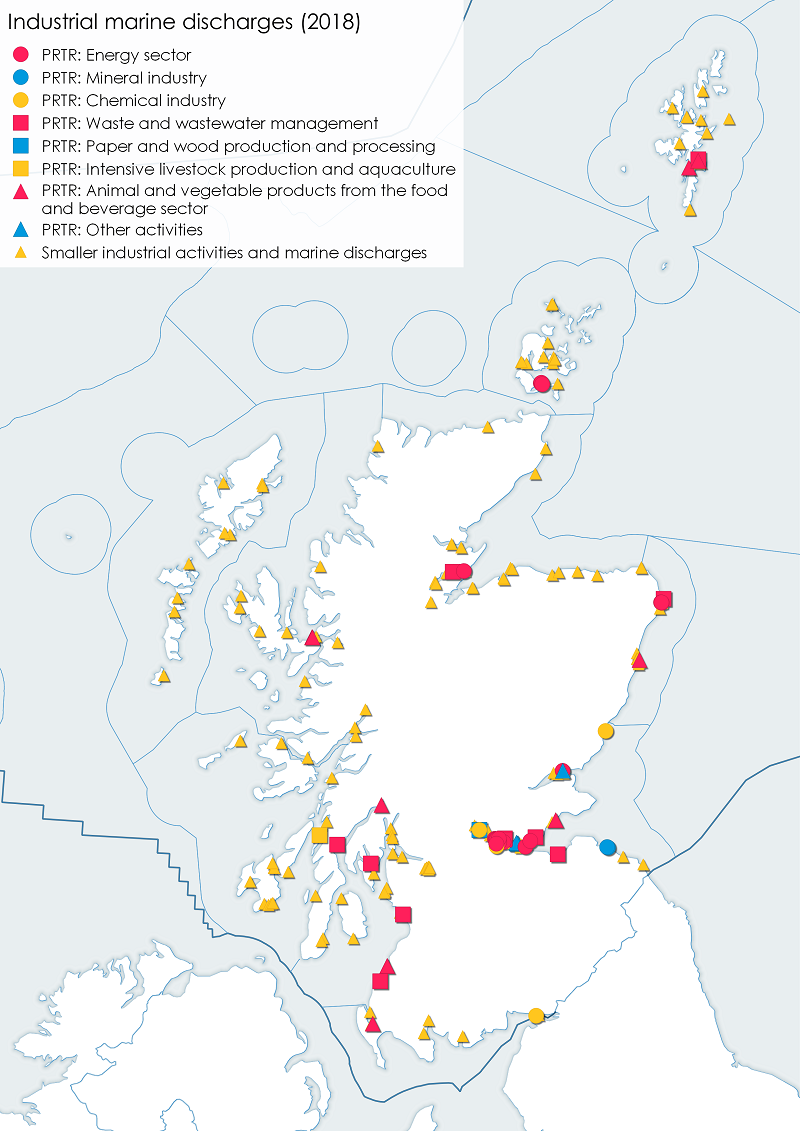 There are four types of treatment undertaken at waste water treatment plants:

WWT plants and outfalls (Table a (by type) and Table b (by volume) per Scottish Marine Region) are found all around the coastline near villages, towns and cities (Figure 1). Those with the larger capacity and higher treatment levels being concentrated in the major firths, near large cities or near sensitive receiving waters.

Scottish Water has objectives for 2015 - 2021. Relevant to the marine environment these include improving the quality of wastewater treatment works discharges to ensure compliance with the environmental standards set out in all appropriate directives. This improvement is monitored through the Government chaired Delivery Assurance Group which reports to Ministers. To date it shows that the investments are on track to deliver environmental protection and improvements in both river and bathing water quality. There is also a requirement to plan for the provision of new strategic capacity to meet the needs of all new housing development until 2021.

When parts of the sewerage network are overloaded by rainwater during storms, they are designed to overflow into the water environment to prevent worse damage elsewhere in the system. This can result in the temporary pollution of our watercourses, bathing waters and shellfish waters. It is now Scottish Water policy that no new surface water is allowed to enter combined sewers from housing developments. Efforts are being made to remove more surface water from sewers to reduce flows to outfalls.

Scottish Water provides sewerage services to the majority of households in Scotland, although some households have private discharges. Most of the over 1,800 public waste water treatment works are operated by Scottish Water but 20 large works are run on behalf of the public by private companies under the Private Finance initiative. The majority of the estimated 250,000 private systems serve domestic properties but include some bigger systems serving caravan parks, hotels and other business premises. Data on domestic discharges from private systems such as septic tanks are not included here.

Industrial effluent discharges are licensed if the volume of effluent is >10m3/day and has a population equivalent >15 and are subject to control placed on the amount and nature of the discharge. SEPA regulates such outfall discharges through The Water Environment (Controlled Activities) (Scotland) Regulations 2011. The outfalls can be categorised into two by their relative size. Table 2 shows the number of industrial activities (small) and marine discharge outfalls (2018) by regulated activity and Table c shows these per SMR. The larger outfalls, by Pollutant Release and Transfer Register category are shown in Table 3 and per SMR in Table d.

Information on emissions is also reported by the site operator to the Scottish Environment Protection Agency (SEPA) as a requirement of the Scottish Pollutant Release Inventory (SPRI). This is a database of annual mass releases of specified pollutants to air, water and land from SEPA regulated industrial sites. It also provides information about off-site transfers of waste from these sites. Reporting thresholds are set to capture around 95% of all industrial pollutant releases.

The SPRI inventory is a statutory requirement and allows Scotland to comply with the European Community Pollutant Release and Transfer Regulation (E-PRTR). It also enables the public and government bodies to centrally search and analyse emissions from regulated sites in Scotland.

Note: some sites more have more than one outfall. In exceptional circumstances (i.e. large storms) secondary or tertiary treatment may be bypassed and untreated or only primary treated waste released.
Table includes 9 outfalls (industrial column) for which there is no population equivalent so excluded from table b below.
Source: SEPA.
Source: SEPA.

In 2019 £7.1M of SEPA’s income was generated by licences issued for disposal in coastal waters. This is across about 738 discharge licences to coastal and transitional waters. There may be multiple outfalls per license and some of the outfalls are not operational.

Between 2010/11 and 2018/19, Scottish Water invested £197M in activity, including new and improved waste water treatment plants and collection systems, to comply with the Urban Waste Water Treatment Directive requirement. During the same period a further £38M was invested in activity, including improved treatment facilities and collection systems to meet Bathing Waters Directive requirements.

An OSPAR agreed list of marine pressures is used to help assessments of human activities in the marine environment. The marine pressure list has been adapted for use in Scotland via work on the Feature Activity Sensitivity Tool (FeAST). Waste water treatment and industrial outfall activities can be associated with 19 marine pressures – please read the pressure descriptions and benchmarks for further detail.

Planning for the 2021-2027 period is underway with more investment needs being identified, which will lead to upgraded treatment works and improved overflows which will benefit coastal waters. There are also requirements in various directives, for example urban waste water treatment directive, bathing waters directive and shellfish directives, to ensure minimal impact and a sustainable co-existence with other existing marine activities such as aquaculture, fishing and bathing.

SEPA is currently preparing for the publication of the third River Basin Management Plans, due at the end of 2021, that will set out the aims and objectives to protect and improve the water environment from 2021 to 2027. Scottish Water is working with SEPA to plan and phase investments so that they can manage their resources to ensure they can fulfil their obligations by 2027.

Trend assessments are not applicable to waste water treatment and industrial outfalls. While information on outfalls is available by type and location they do not generate economic value in their own right.