Patterns of life on Scotland’s rocky seashores are shaped by differences in waves, nutrients and water temperature around the coast. Responses to climate and other changes reflect these patterns. Alongside recent increases in seaweeds and declines of mussels, warm-water species have increased due to climate warming since the 1980s. This assessment is based on extensive surveys of most of Scotland’s rocky coasts in 2014/15 and will form the basis for detecting change in future assessments.

The state of ecological communities on Scotland’s coasts is best understood through an examination of the primary influences on the distribution and abundance of the main species living there, namely waves, light, nutrients and temperature. Here, the main types of communities and their arrangement is reviewed, and the recent response of life on rocky shores to climate warming is interpreted through the lens of sensitivity of different species to temperature. Other major changes have occurred over the last decade, notably the decline of blue mussels and increase in seaweeds, but their causes remain unknown.

The arrangements of types of rocky shore communities along environmental gradients such as wave exposure and sea temperature are strong indicators of likely community responses to changes in those factors over time. With future warming, for example, the composition of rocky shore communities is expected to become more like that seen in currently warmer conditions to the south and west of Scotland.

Exposure of coasts to waves is the main factor determining both the habitat type and the make-up of the communities of animals and plants on rocky shores. Actual measurements of size of waves and frequency of extreme wave events is a time-consuming and costly activity. Instead, wave exposure is commonly estimated using a measure of how much the shoreline faces the open sea, expressed by the distance to the nearest land (wave “fetch”) in all directions around a coastal location (Burrows et al., 2008; Burrows, 2012).

Scotland has a broad mix of seashores across the categories of wave exposure (Figure 1). Wave-exposed shores are found all around the coast, with the most exposed shores on the outer coasts of the Hebrides (Islay, Tiree, Barra, the Uists and Lewis), the North Coast, Orkney and Shetland. East coast shores have similar wave fetch but do not face the Atlantic swells of the west coast 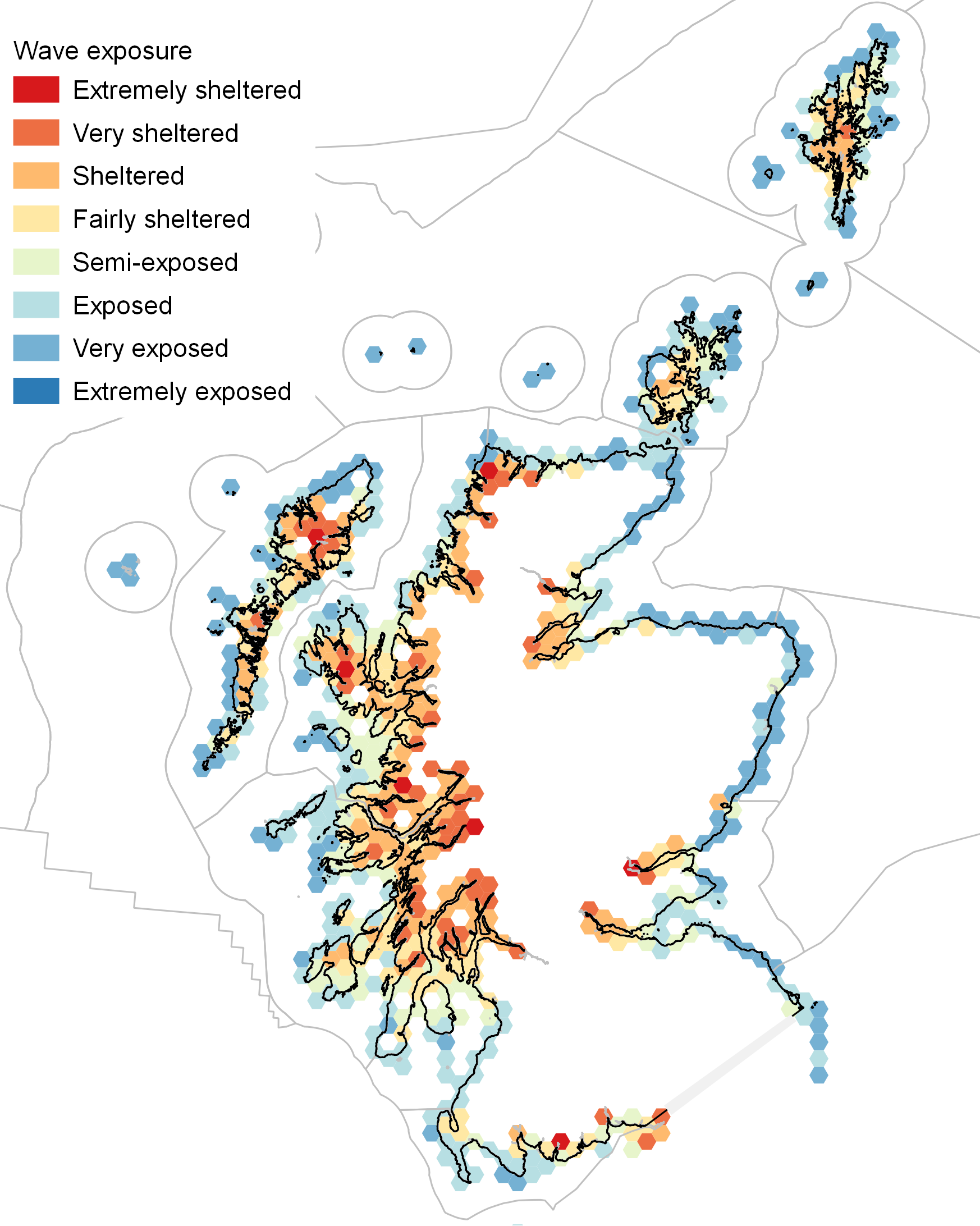 Wave-sheltered shores predominate in the sea lochs of the west coast, and in the firths and voes of the Hebrides, Orkney and Shetland. Wave shelter on the east coast is limited to the shores of the Dornoch, Cromarty and Moray Firths in the north and Firths of Tay and Forth in the south. 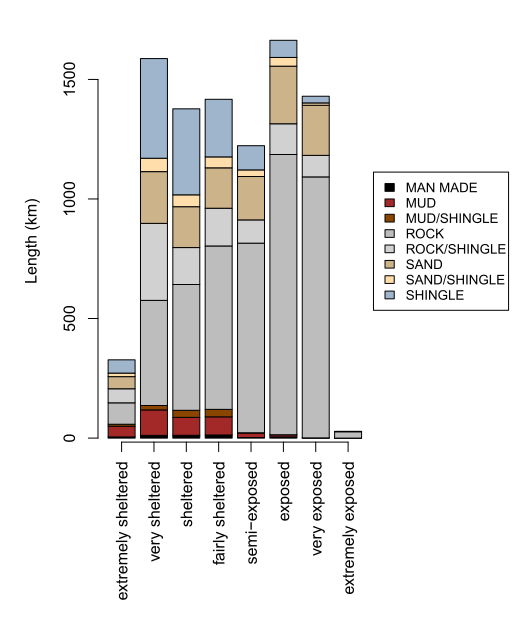 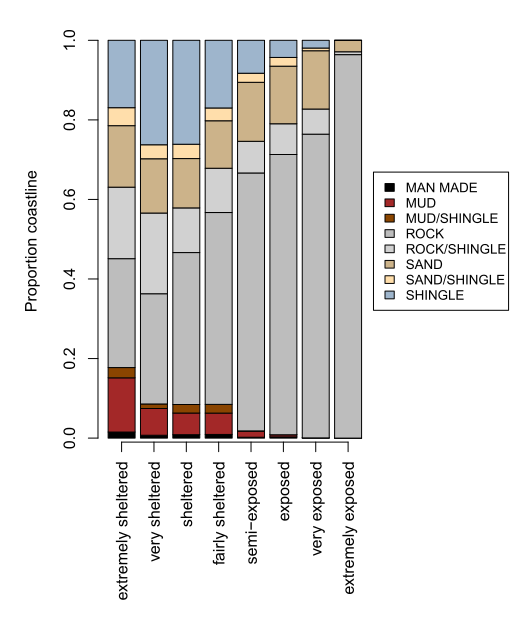 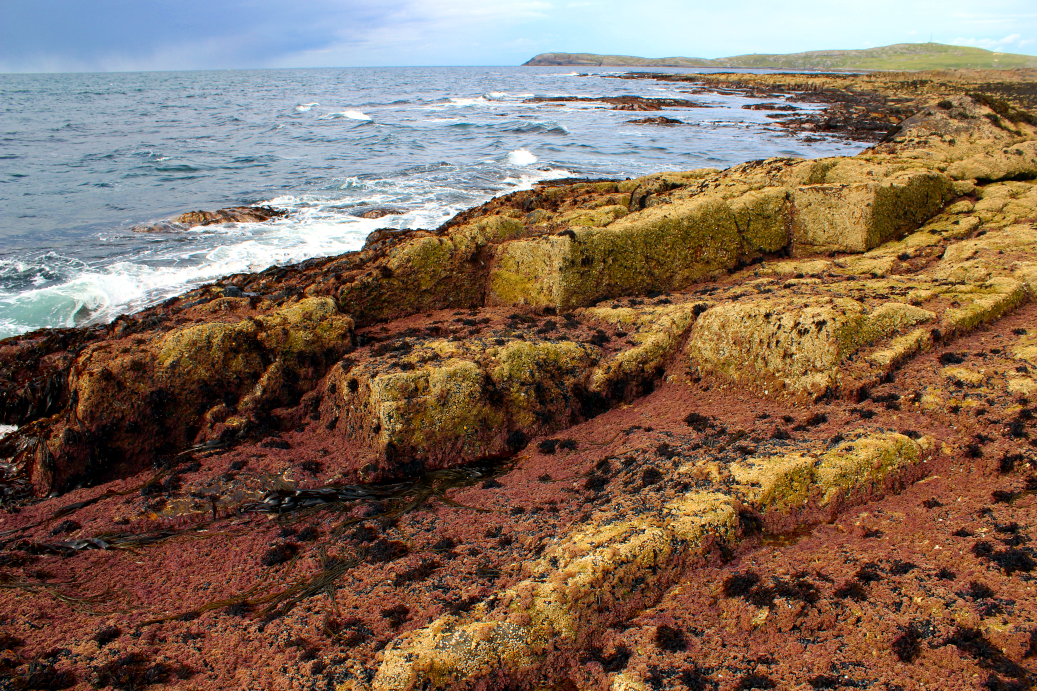 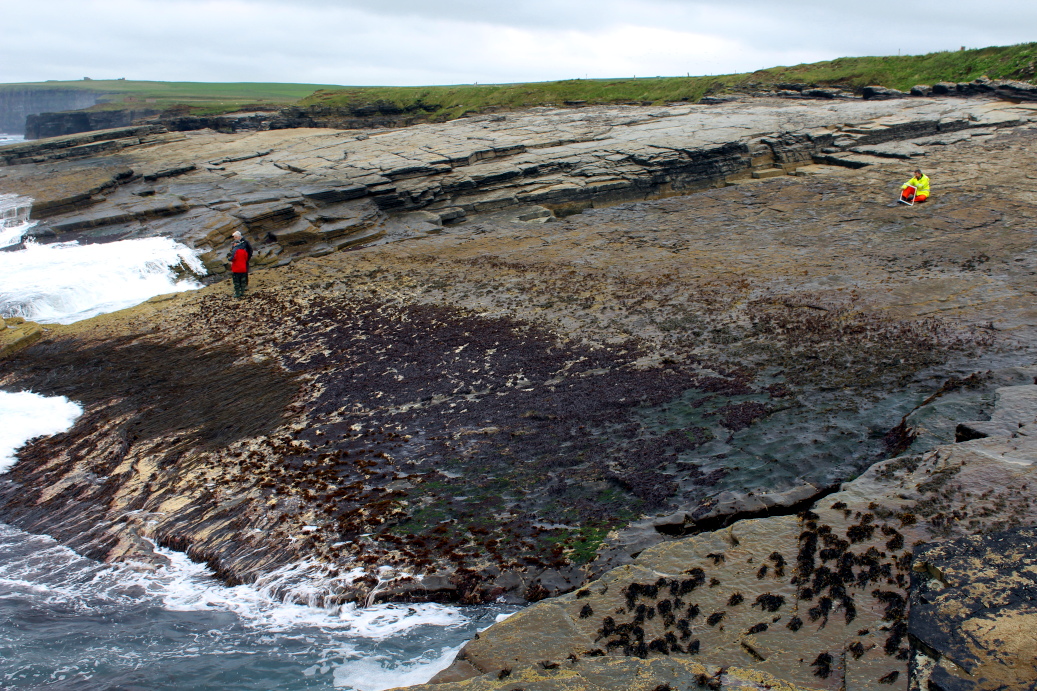 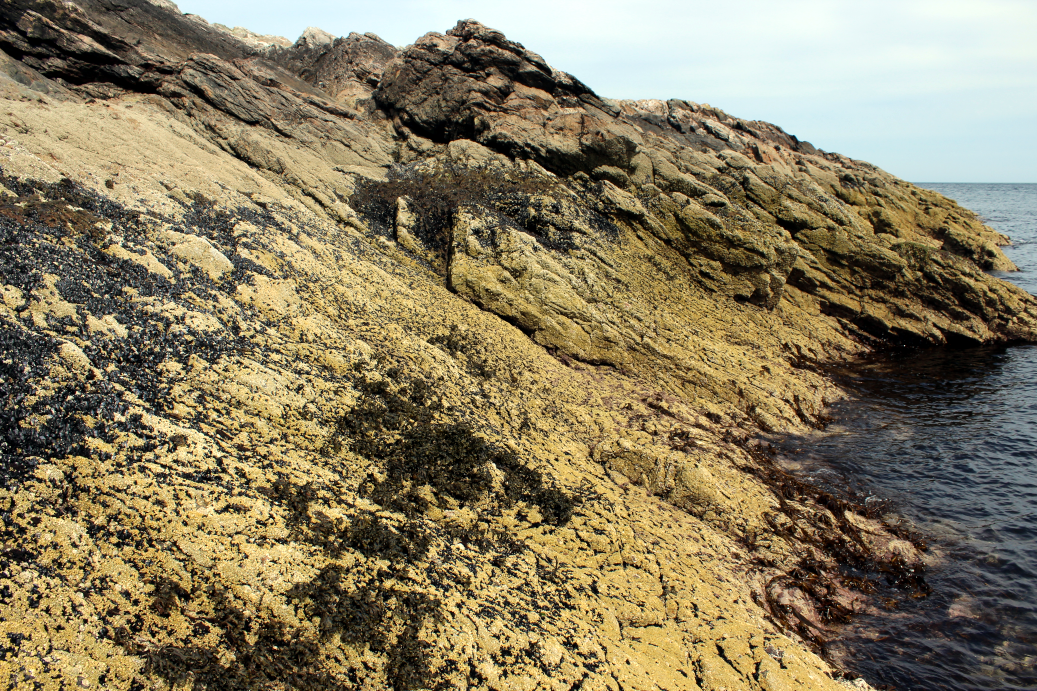 The complexity of rock formations in wave exposed areas can provide refuges for less wave-tolerant species, meaning that a greater mix of species can be found on more topographically complex shores. Similarly, shores with more horizontal surfaces tend to have ecological characteristics more typical of less wave exposed localities, as waves breaking across such reefs at high tide may lose energy towards the landward side of the shore.

Large brown seaweeds cover an increasing proportion of shores when progressing from semi-exposed towards wave-sheltered conditions (Figure 6 to Figure 10). 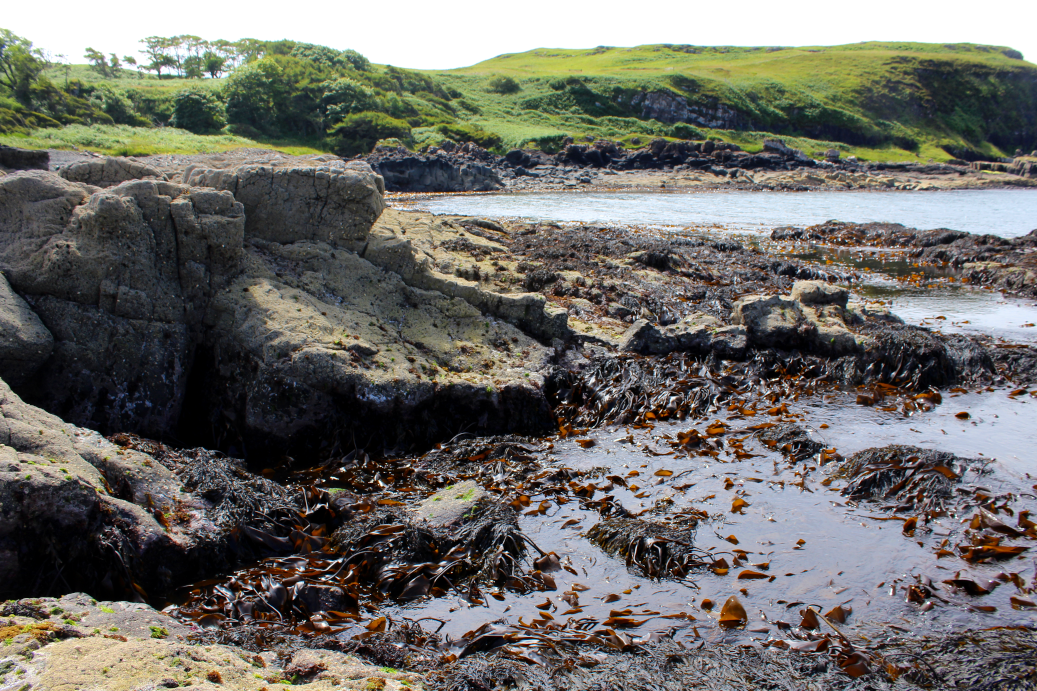 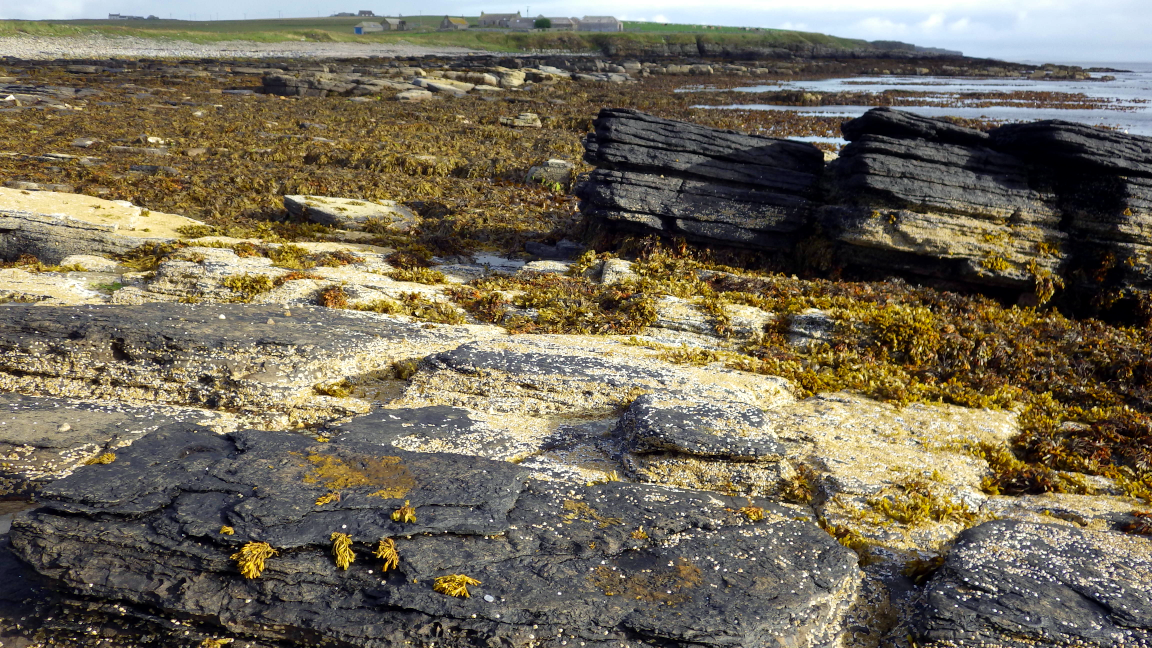 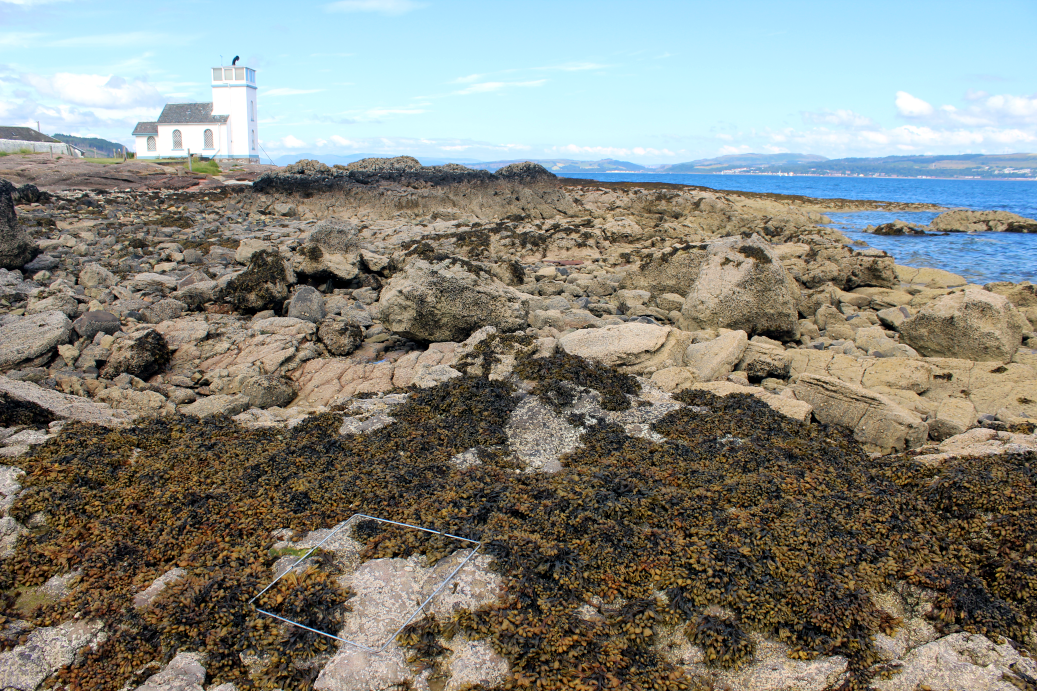 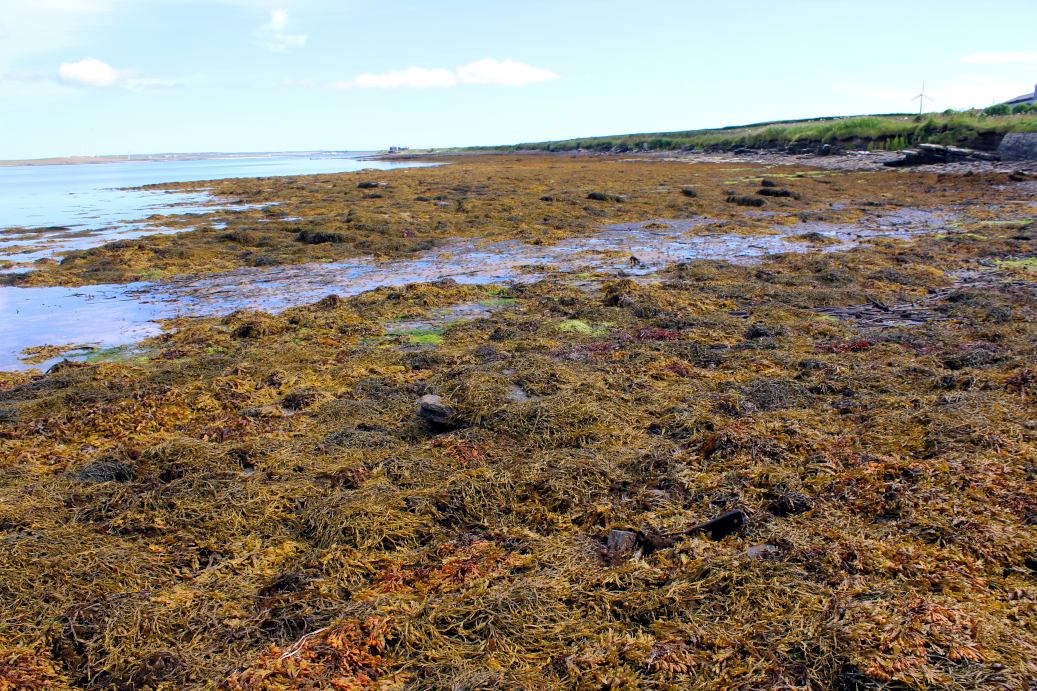 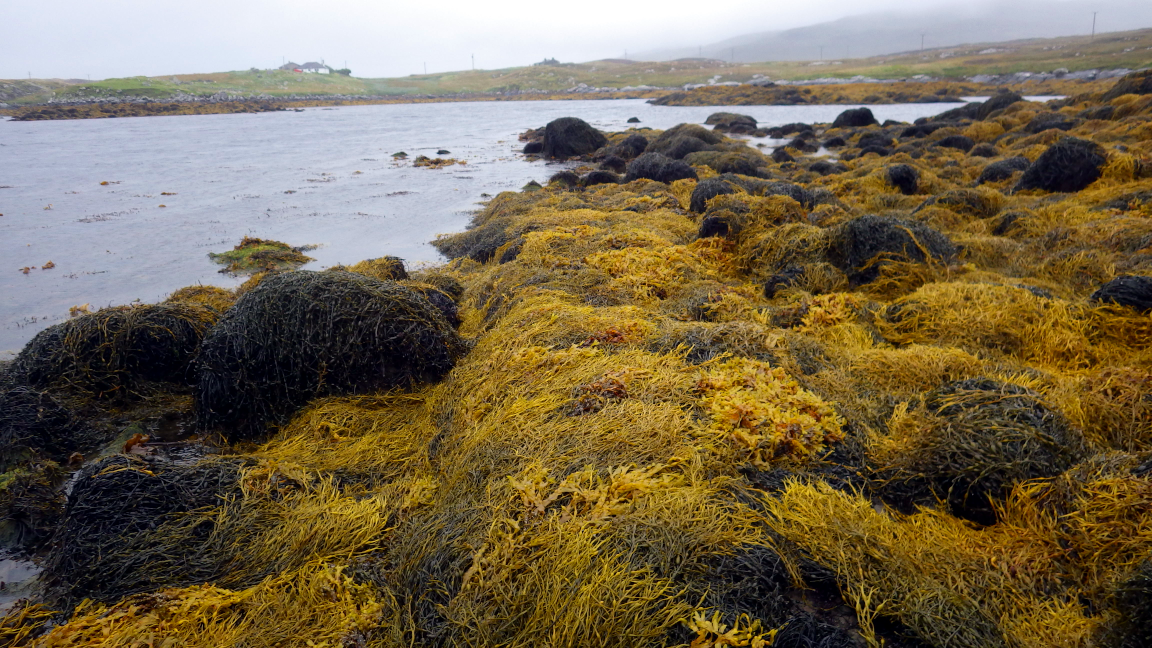 Seaweeds including bladder wrack (Fucus vesiculosus) and serrated wrack (Fucus serratus) dominate shores in conditions of intermediate wave exposure (Figure 7, Figure 8), while the most wave-sheltered shores can be almost entirely covered by egg wrack (Ascophyllum nodosum, also known as rockweed, Figure 10). Egg wrack plants can be up to 1.5 m long and can form the highest biomass of any seaweed on the shore, typically up to 10 kg of wet mass per metre squared. Commercial harvesting of intertidal seaweed is largely focussed on egg wrack, with significant harvesting activity in North Uist and Lewis (Burrows et al., 2010).

Light and temperature as influences on community composition

Light is essential for seaweed and the clarity of water may be important for the growth of seaweed, even if exposed to air during low tide. Satellite data on the colour of the ocean surface (Figure 11 right) shows that high concentrations of phytoplankton cells are often found in the waters around urban centres including the Firths of Clyde and Forth, where nutrients promote plant growth. Suspended sediment particles in the water also reduce light penetration (Figure 11 left), with high levels of suspended material in the Solway Firth and across the east coast. 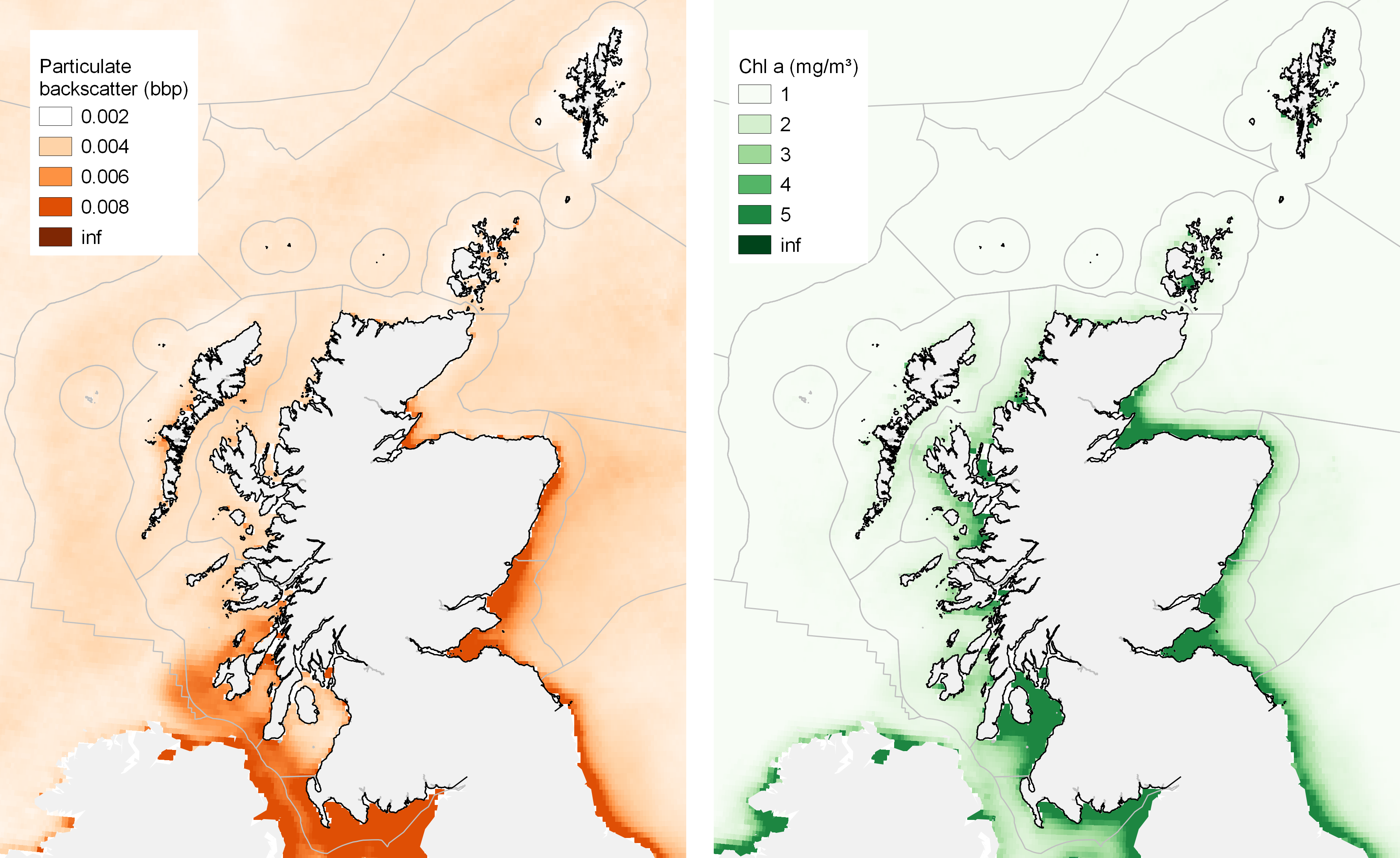 Figure 11: Light: satellite-derived estimates of (left) suspended sediment as a contribution to scattering of light at the sea surface (right) surface chlorophyll a.

The number of species of seaweed found on the shore is reduced in areas with reduced light penetration (Burrows et al., 2014). Whether the limits imposed by the light available inhibits seaweed growth in such places or, alternatively, the increased amount of phytoplankton and other suspended material promotes the growth of filter-feeding animals (primarily barnacles and mussels) that may compete for space is not yet known. The switch between seaweed-dominated communities and filter-feeder-dominated communities may be a useful reflection of coastal water quality. The regional differences in rocky shore communities between areas of low and high light levels suggest likely responses to changing water quality in any given area, with increased diversity of seaweeds expected with improving quality. In contrast, increased coastal nutrients, for example, is likely to lead to greater concentrations of phytoplankton and a consequent shift in dominance of rocky shore communities towards barnacles and mussels.

Sea temperature is important for rocky shore communities, mostly through the effect on those species of animals and plants that are at either the southern or northern limits of their distribution in Scotland. Such species are generally not large or habitat-forming but their presence is associated with cooler or warmer water temperatures, while fluctuations or trends in the abundance or prevalence of warm-water or cold-water species are taken as strong indications of a response to climate change (see Climate change section).

Summer sea temperatures (Figure 12 left) tend to be cooler in the north while winter sea surface temperatures, such as those in February (Figure 12 right), are cooler in the east. Southern, warm-water species on rocky coasts are generally restricted to the west coast of Scotland and the Northern Isles, and are therefore better aligned with the pattern of winter rather than summer temperatures. 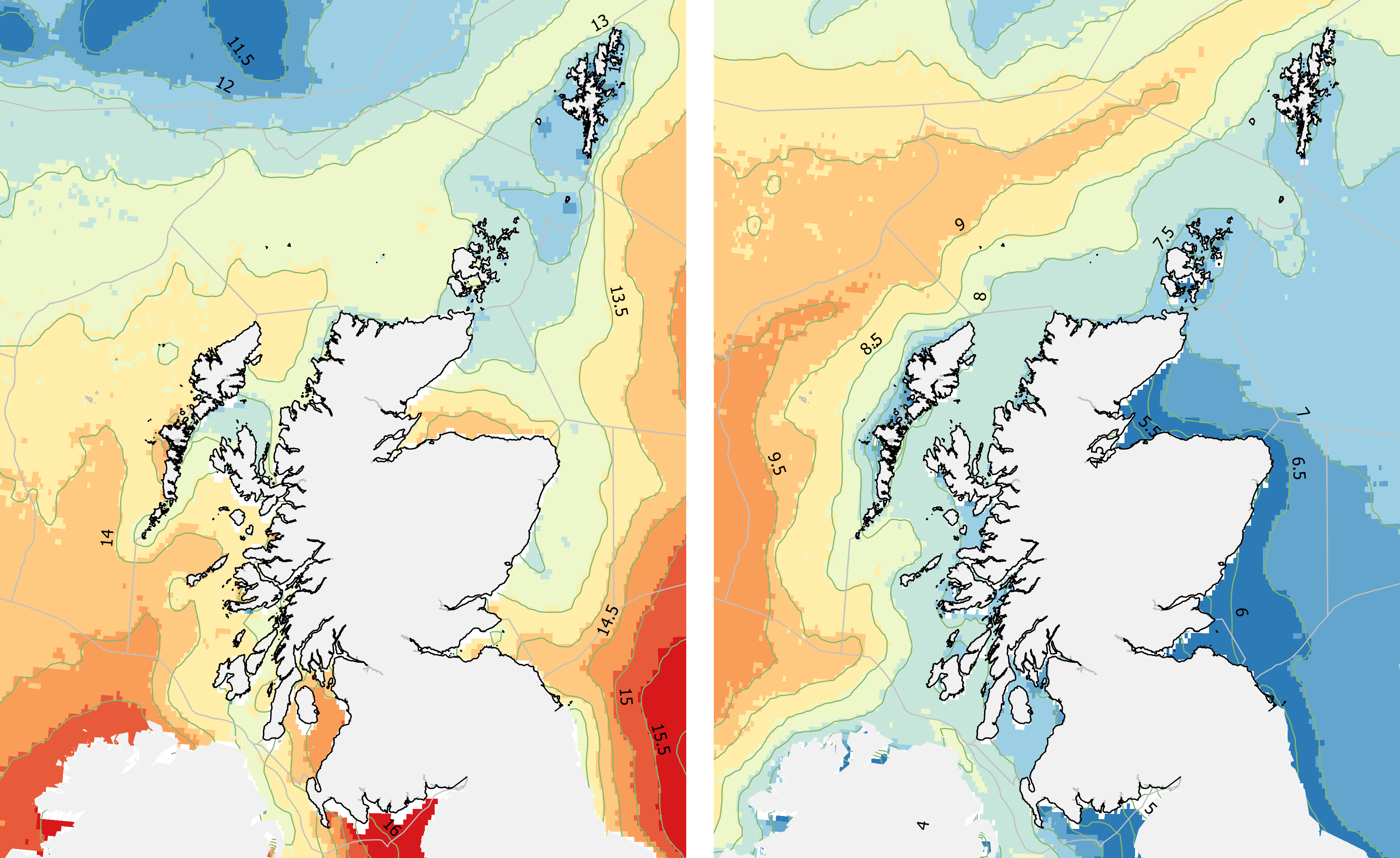 With growing concerns about the impacts of climate change, systematic surveys of animals and plants on rocky shores all around Scotland have been made more frequently since 2000 with the aim of detecting ecological change as it happens and establishing baselines for future change. These most recent records show patterns of changing abundance for each species across wave exposure gradients (Figure 13).

Figure  13: Changes in abundance for selected species over wave exposure categories. Abundance is recorded as ranked categories during each survey. The plots show the proportion of surveys in each exposure category.

Changes in averages are less informative than the changes in the spread of sites where each species reaches a particular abundance category. For egg wrack (Ascophyllum nodosum), the probability of the species being super abundant (>60% cover) increases towards wave shelter, with the probability of it being completely absent from a shore increasing towards wave exposure. Red seaweeds, including dulse (Palmaria palmata, also Figure 4), false Irish moss (Mastocarpus stellatus) and coral weed (Corallina officinalis, also Figure 3) show the opposite pattern, becoming progressively more likely to be in higher abundance categories towards wave exposed conditions.

A few species, such as the warm-water acorn barnacles Chthamalus montagui and Chthamalus stellatus and the flat topshell Steromphala (previously Gibbula) umbilicalis are restricted to west and north coast seashores, and are thereby more likely to be abundant in areas of warmer February temperatures (Figure 14). 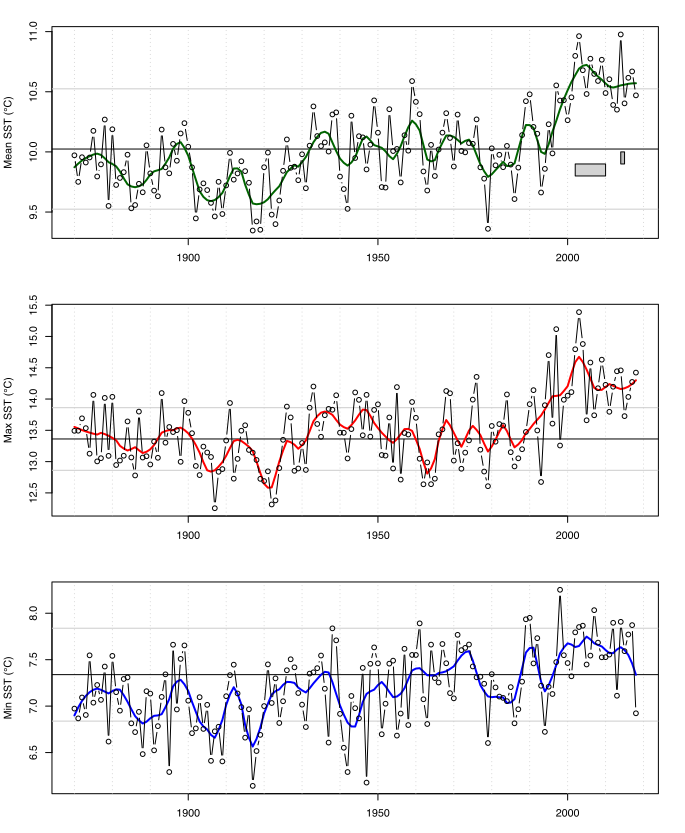 Responses of ecological communities to the currently warming climate are primarily driven by the temperature sensitivities of their component species of animals and plants, as revealed by their geographical distributions. Rocky shore communities in Scotland are no exception to this rule (Burrows, 2017).

Widespread systematic monitoring of UK rocky shores (including Scotland and Ireland) began in 2001 with the aim of detecting responses to climate warming (among other stressors) (Mieszkowska et al., 2005). This programme started immediately after two decades of rapid warming and showed expansions by the early 2000s in the distribution of warm-water species (Mieszkowska et al., 2006) since the mid-1980s that were consistent with warming, notably an apparent expansion of the flat topshell Steromphala (previously Gibbula) umbilicalis along the Caithness coast.

Despite a more intensive survey effort in 2014/15, including a visit to Shetland not surveyed in the previous decade, there was not strong evidence for range shifts or changes in abundance that could be easily attributed to temperature.  Some warm-water forms such as Poli’s stellate barnacle (Chthamalus stellatus) (Figure 16) were found in low numbers in places outside their historical ranges in 2014/15 but only after targeted searching of shores with the right kinds of conditions suitable for those particular species. Since little temperature change had occurred since the previous survey (Figure 15), this lack of significant climate-driven change was not unexpected. 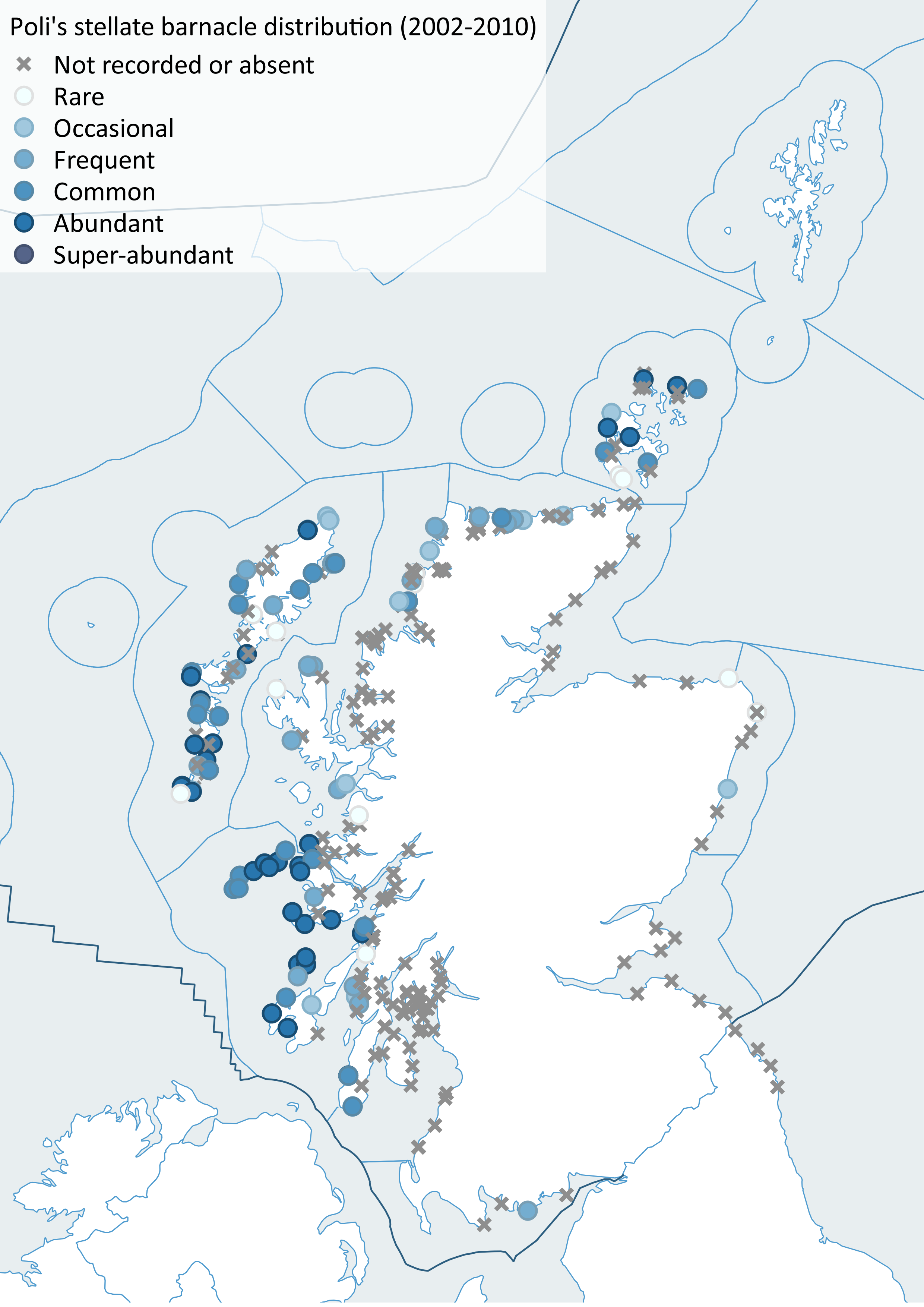 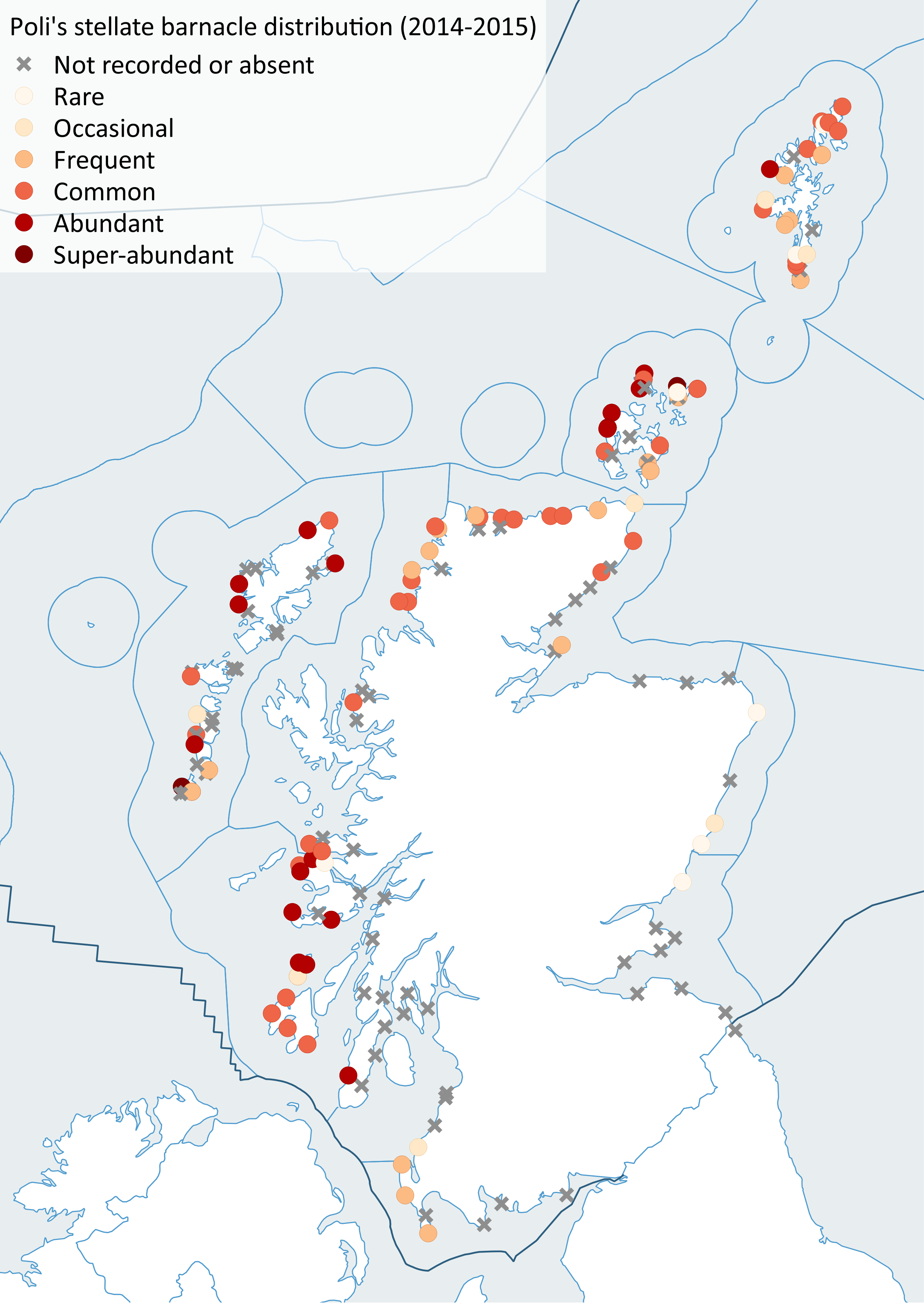 While dramatic changes are difficult to demonstrate, it has been possible to show how changes across many species considered together over a longer period are happening in relation to warming. Warm-water species, those from places warmer than prevailing conditions in Scotland whose distributions may extend into southern Europe and African coasts, tend to increase in abundance with warming temperatures while those from colder places, here from Scotland towards the Arctic, tend to decline with warming. One method of expressing this change across multiple species is to estimate the average across all species in a community of the geographical midpoint temperatures across their distribution range ((Burrows et al., 2017). Termed the Community Temperature Index, this measure directly reflects the changing dominance of cold- and warm-water species in relation to temperature change.

The best example of the shift from cold-water to warm-water species is from the environmental monitoring programme around the oil terminal in Sullom Voe, Shetland. Rocky shores in the area have been surveyed since before the construction of the terminal in 1976. Average sea temperatures in the area have increased from around 9.5°C in the early 1980s to around 10.2°C in the late 2010s. . After a steep decline following a cold spell in 1979, the average species midpoint temperature (the Community Temperature Index) for the community has increased over the same period by a smaller quantity (Figure  17), but nonetheless in line with the temperature increases. Seaweed species did not show this shift, largely because seaweeds in the area have generally similar temperature tolerances and have therefore not changed in their abundance relative to each other. 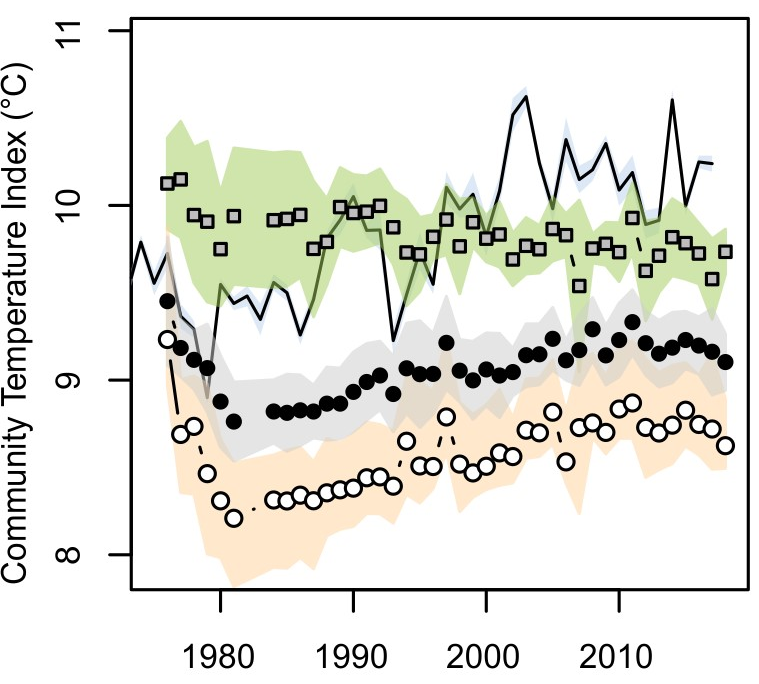 While changes between the early 2000s and 2014/2015 were not immediately attributable to climate change, largely because of the lack of a temperature increase over the period, there were notable increases and declines in species between the two periods (Figure 18). The biggest decline was in blue mussels (Mytilus edulis), showing reduced abundance at over 50% of the 154 sites revisited. 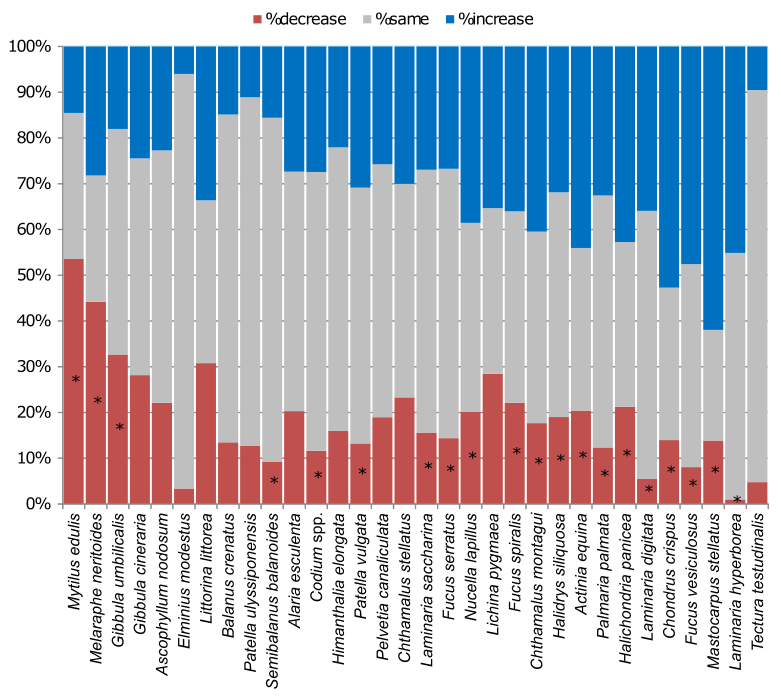 Figure 18: Increases and decreases in abundance of rocky shore species around Scotland between surveys in the 2000s and visits to the same locations in 2014/15.

Many other species, mostly seaweeds, showed widespread increases over the same period. While the causes of these changes remain unknown, a possible candidate could be ocean acidification, since declining pH in coastal waters has been associated with declines in mussels in the Pacific coast of North America (Wootton et al., 2008), while in laboratory experiments algae show increases in performance in the lowered pH associated with more dissolved CO2 (Kroeker et al., 2013). Whether such changes are part of a longer-term trend or reflect short-term variations in the success of the species remains to be seen.