Fish are an important part of the marine food web, and fishing of commercial stocks of finfish (such as cod, haddock, monkfish, mackerel and herring) and shellfish (such as Nephrops and scallops) can provide a sustainable, healthy food source for humans. Changes in the distribution and abundance of fish could have an impact on the distribution and abundance of their predators (such as seabirds and cetaceans), and on profits and food security for humans through changes in fishery productivity.

Climate change is also leading to changes in the seasonality and biological cycles (the study of which is termed phenology) of species: these could include earlier or later timing of important events such as spawning and hatching. Different climate induced phenological responses among species could disrupt the usual synchrony between predators and their prey. For example, fish larvae from winter spawners may not hatch at the same time as their zooplankton prey, leading to a mismatch that impacts the reproductive success of fish (forming the basis of Cushing’s match-mismatch hypothesis; for example see Sandeel Case study).

Ocean acidification may have negative effects on species that form shells (such as crustaceans and molluscs) by reducing the available calcium carbonate, and may also have an impact on the physiological processes of finfish (through energy requirements for acid-base regulation), particularly for early life stages.

Research on the impacts of climate change on fish has focused on changes in distribution of certain species and communities, changes in seasonality and timing of events in natural cycles (phenology), changes in body size, and the impact of ocean acidification on physiology and early survival (Wright, Pinnegar, & Fox, 2020). Most focus has been on temperature because this has a key control on biochemical and physiological rates (e.g. oxygen demand, growth rate) and therefore is important for the development and behaviour of fish (Wright et al., 2020).

Distributional shifts in species have been mainly linked to temperature changes. Tracking distribution changes demands a consistent approach to recording marine life, and here Scotland has benefited from its role in coordinated survey programmes of marine species. The best example is the International Bottom Trawl Survey programme of the International Council for the Exploration of the Seas (ICES). Data from national fishery surveys across European countries are collected together and made available for analysis. Many studies have used these data to study changes in fish communities and species distributions.

Recent studies, such as Burrows et al. (2019), have averaged the temperature experienced by a species across its global range (from species distribution models and sea surface temperature data) to determine temperature affinity of a species (also expressed as Species Temperature Index). These indices of individual species can then be weighted by species abundance to provide information on changes in community temperature affinity (also expressed as Community Temperature Index). Burrows et al. (2019) considered the temperature affinity of bottom-living fishes and demonstrated that there has been a shift towards a dominance by warm-water species (e.g. lesser-spotted dogfish, hake, horse mackerel) and away from cold-water ones (e.g. Atlantic cod, Atlantic herring, sprat) as the climate has warmed (Figure 1). In the face of environmental pressures on these cold-water species, there may be an increased risk of over-exploitation by fisheries which fishery managers may need to consider. Due to temperature changes there has been an increase in warm-water fishes and the species richness of the west of Scotland fish community has changed (Magurran, Dornelas, Moyes, Gotelli, & McGill, 2015). 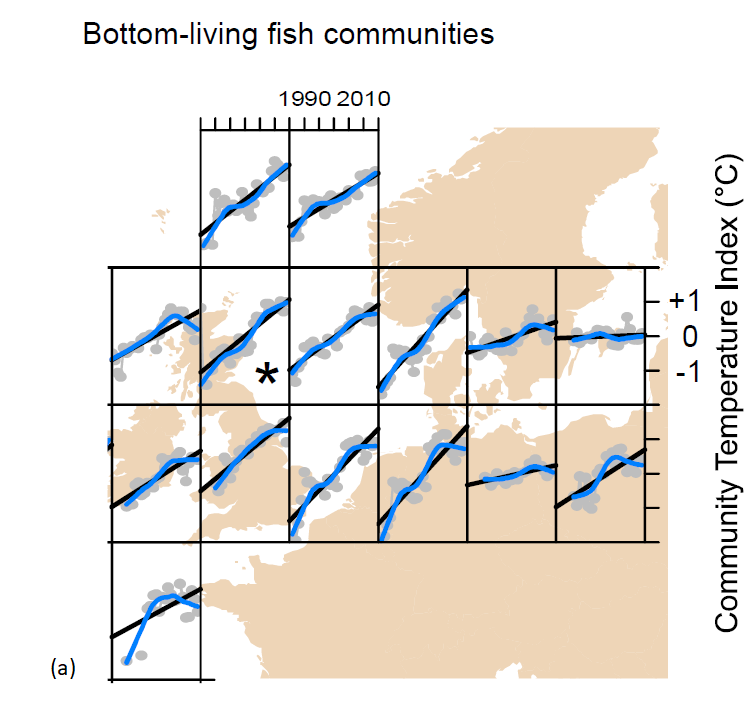 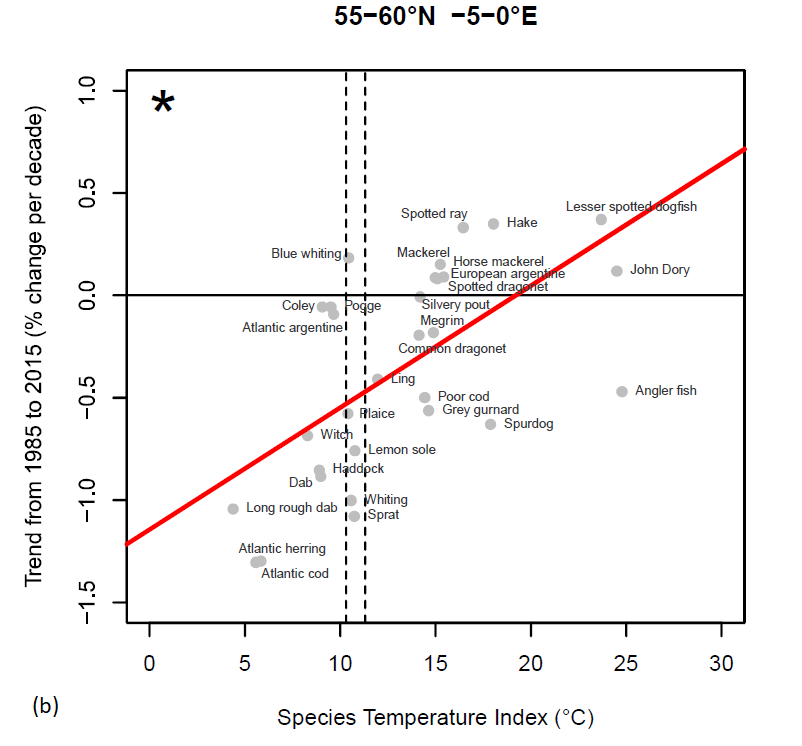 Figure 1: Changes in bottom-living fish community in response to temperature from 1985 to 2014. (a) time series of an average measure of the temperature affinity (Community Temperature Index) of species caught in the ICES International Bottom Trawl Survey in each grid cell; (b) trends in occurrence of individual species in trawl surveys off North-east Scotland (area indicated with star in (a)) showing the tendency for greater declines in species with an affinity for colder waters. In panel (a), grey lines join the annual values of Community Temperature Index, blue lines are LOESS smoothed regression lines through these annual points, and black lines are linear regression lines showing trends over the 30-year span of the data. From data analysed in Burrows et al. (2019).

Warming has been linked to expansions in several species including those not typical of Scottish waters such as European anchovy (Engraulis encrasicolus; Wright et al., 2020). Recent changes in mackerel distribution have also been linked to warming, although depth, geographical attachment and density effects have all been proposed as explaining factors (Wright et al., 2020). Changes in mackerel stocks have led to subsequent international conflict in fisheries management (see Climate change - Fisheries). The increased frequency of bluefin tuna (Thunnus thynnus) occurrences has been related to the expansion of mackerel distributions, as well as to changes in temperature, and an overall increase in stock size.

While distribution shifts evident from surveys are often thought to reflect movements this is not always the case and the ability of marine species to move in response to temperature depends on a range of factors, including their physiological capacity to acclimate and respond to acute stress as well as their degree of geographic attachment or the responses of their prey. For example, the well reported northward shift in North Sea cod distribution (Perry et al., 2005) is not linked to adults moving north (Neat & Righton, 2007; Neat et al., 2014), but rather a difference in survival of the component sub-populations of the North Sea (Wright, Pinnegar, & Fox, 2020 and references therein).

The potential impacts of climate change on different species are very much related to their life history. Those species exhibiting geographical attachment to certain habitats for spawning or juvenile nursery, such as sandeels and cod, will likely experience greater impacts. Both prey availability and temperature changes in these localities can impact survival. However, there is still uncertainty about how climate affects all stages of fish survival, and knowledge on this is still emerging. There is little published work on temperature effects on deep-sea fish communities.

Climate change is having an impact on the timing of natural cycles and seasonal phenomena. Evidence from different fish species suggests climate change is affecting the timing of spawning, hatching and migration (Wright et al., 2020). For example, spawning of sole stocks was found to occur earlier in the southern North Sea (Fincham et al., 2013)

Examples in Scottish waters include evidence that the rate of gonad (reproductive organ) development in cod is increasing with time. McQueen & Marshall (2017) found a significant negative relationship between surface temperature and gonad development, although this study did not account for the seasonal stratification in the region. In contrast, a laboratory study of Raitt’s sandeel (Ammodytes marinus) found warming delayed ovarian development, as the greater metabolic cost of warm autumn temperature meant that buried individuals did not have the additional energy to invest in gonad development (Wright et al., 2017a,b).

Understanding of the role of phenology in recruitment is still limited, due to a limited number of studies investigating the mechanisms and the limited source of relevant time series of prey such as zooplankton. However, thanks to long-term monitoring sites, such as the Scottish Coastal Observatory, it has been possible to explore the importance of synchrony between zooplankton and fish-larval hatching on year-class size. Such investigations of Raitt’s sandeel appear consistent with Cushing’s match-mismatch hypothesis, in that large year-classes reflect a high overlap in sandeel larvae and copepod hatch times (Régnier, Gibb, & Wright, 2017). Importantly, increasing temperature has a different effect on the timing of these events in predator and prey, leading to more frequent poor year classes of sandeels in the western North Sea (Régnier, Gibb, & Wright, 2019).

Reduction in mean body size of fish species has been linked to warming temperatures (Wright et al., 2020). This is due to temperature-related changes in oxygen demand and metabolic cost of activities such as movement and eating. Cold blooded animals are generally expected to develop faster and become adult at a smaller body size with increasing temperature. Baudron, Needle, Rijnsdorp, and Marshall (2014), for example, found a temperature-related reduction in body size in six commercial fish species (haddock, whiting, herring, Norway pout, plaice and sole) in the North Sea.

Modelling of future impacts of climate change on fish has focused on modelling species distribution, physiology, food webs and marine ecosystems “end-to-end” (representing the ecosystem, its drivers and management). Although there are still many uncertainties associated with all approaches, progress has been made towards understanding future climate impacts on fish, particularly by analysing ensembles of model predictions (Peck et al., 2018).

Fish distribution models are emerging that try to predict the distribution on seasonal to decadal time scales for some fish species, including blue whiting and Raitt’s sandeel (Payne et al., 2017). For example, rising temperatures off the west coast are projected to cause declines in some species with a narrow temperature tolerance such as cod, herring and haddock. In contrast, whiting could increase as a result of rising temperatures and declines in predators such as cod, but may also be compromised by changes in plankton and ocean acidification.

As in the Régnier et al. (2019) study, of sandeel and their prey (copepods), rising temperature is expected to increase the likelihood of such a trophic mismatch resulting in poorer survival of cold water fish species. Warming has been associated with poor early survival and low recruitment in many fish species, including cod.

Understanding potential future impacts on marine fish will require improving the understanding of impacts across the food web and marine ecosystem, as well as the interaction with management decisions and fishing pressure, from both observational evidence and modelling approaches (Wright et al., 2020).