Sandeels, Ammodytidae, are small slender fish that are an important component of food webs in the North Atlantic and the most abundant species group in the North Sea (Sparholt, 1990). They feed on zooplankton, mostly copepods, and in turn are prey to many piscivorous fish, seabirds and mammals. Of the five species found in Scottish waters, there are two species of lesser sandeel; Ammodytes tobianus which is largely found in coastal waters from the inter-tidal zone and A. marinus (also known as Raitt’s sandeel) which inhabits deeper waters, particularly between 20 and 80 m (Wright et al., 2000). A. marinus is the most abundant species supporting a large fishery in the North Sea and prior to the mid-2000s, inshore fisheries off the Shetland Isles and West coast. In the following sections all reference to sandeel biology relate to A. marinus.

As the name suggests, sandeels have a dependence on sand into which they bury at night and during the winter months (Figure 1). Due to this relationship with a specific habitat the life-cycle of sandeels is unusual for a fish, with life stages that disperse either passively or actively followed by site fidelity to large patches of sand, termed grounds (see Figure 2). While actively feeding in spring and summer, sandeels tend to remain within 10 km of their grounds (Wright et al., 2019). Sandeels remain buried between September and February, except to emerge between December and February to spawn their demersal eggs onto sand from which larvae hatch between February and April (Wright & Bailey, 1996; Regnier et al., 2017). The planktonic larvae are transported by currents for up to 10 weeks until they start to change from transparent to silver as they metamorphose into juveniles (see pelagic juvenile in Figure 2) that then seek areas of sand (Wright & Bailey, 1996; Proctor et al., 1998; Wright et al., 2019). Suitable areas of sand are scattered throughout the North Sea and West of Scotland but the size of these tend to decline heading from the south east to the north west. 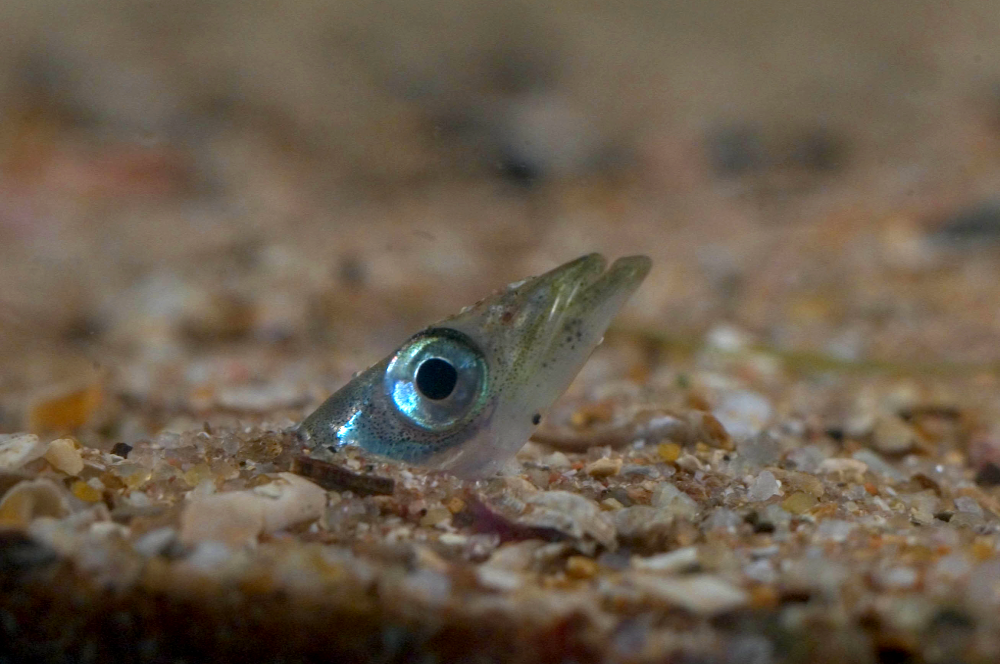 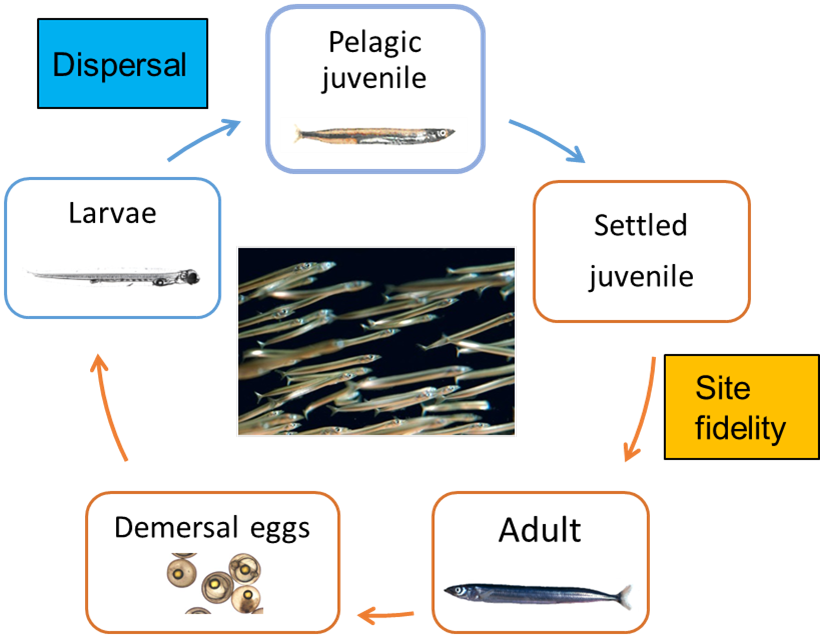 Figure 2: Life-cycle of Ammodytes marinus showing the life-stages where the species disperses (blue boxes) or remains (orange boxes) at a ground.

Until 2010, ICES assessed sandeels as just one North Sea stock, with the exception of the Shetland Isles. However, since 2011 ICES provides advice on several stock units following a review of evidence for reproductively isolated sub-populations (ICES, 2010; Wright et al., 1998; 2019). The largest of the sandeel stocks in Scottish waters is sandeel area 4 and this is the only one with an active fishery. This is found off the north east UK coast and is mainly targeted by a Danish fishery (Figure 3). This is termed an industrial fishery as the sandeels are processed for their oil and fish meal for use in many types of food for human and animal consumption. 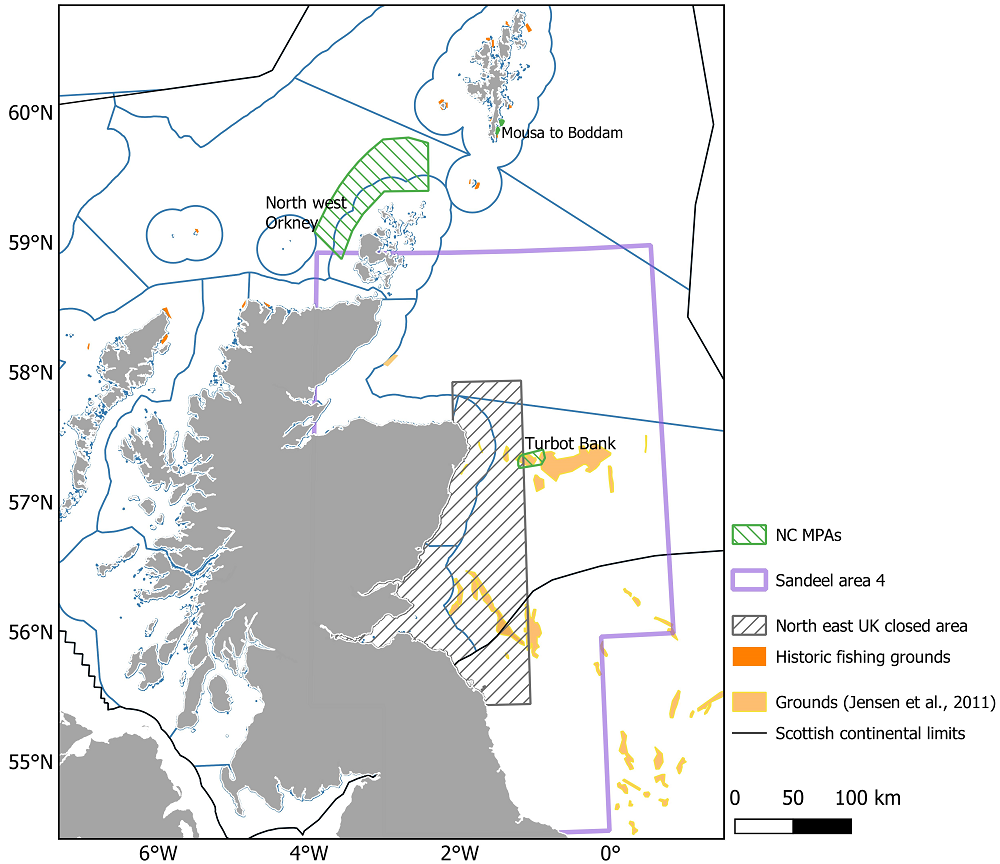 Since 2008, Marine Scotland Science (MSS) has conducted an annual dredge survey in December at grounds off the Firth of Forth and Turbot Bank in SA4. These surveys provide an index of numbers at age from 0 (young of the year) to age 4 and older. The internal consistency of the MSS survey, measured as the correlation between ages of the same year-class, is high and since 2017 this survey has been used to tune an age based assessment for the SA4 stock, similar to that used for other commercial fish species. The assessment estimates the numbers at age and with information on the weight and proportion mature at age provides an estimate of spawning stock biomass (SSB). As sandeels in SA4 mature both at a smaller size and later age compared to other sandeel stocks it is important to consider this in estimating SSB (Boulcott et al., 2007). While the assessment uses commercial catch data, the high variability in fishing landings means that the dredge survey index has a strong influence on the estimate of stock size. The annual assessment and catch advice is available from ICES and covers the period from 1993 to the present. ICES advises on a total allowable catch (TAC) based on an escapement strategy, whereby a fishery should only be allowed if the stock assessment indicates that the spawning stock will be above a precautionary spawning biomass level (Bpa) in the following year. Due to the uncertainty in forecasting future Bpa for short lived species like sandeels a ceiling to the maximum fishing mortality (Fcap) is also set. Owing to the relatively low productivity of sandeels in SA4 (Boulcott et al., 2007; Boulcott & Wright, 2011; Rindorf et al., 2016) this Fcap is much lower than that for other North Sea sandeel stocks.

While it is difficult to generalise about the state of the stock over the current assessment period, since 2011, SSB has been above Bpa except for 2015 and 2019 (Figure 4). Fishing mortality was very low from 2005 until the start of the analytical assessment in 2017 and in 2018 it was the highest since 2004 but then decreased in 2019. The main driver of stock change is recruitment (age 0 abundance), which was high for a few years in the 1990s but very low in the mid-2000s. A large year-class in 2009 led to a recovery of the stock and there has since been a large 2014 and moderate 2019 year-class. 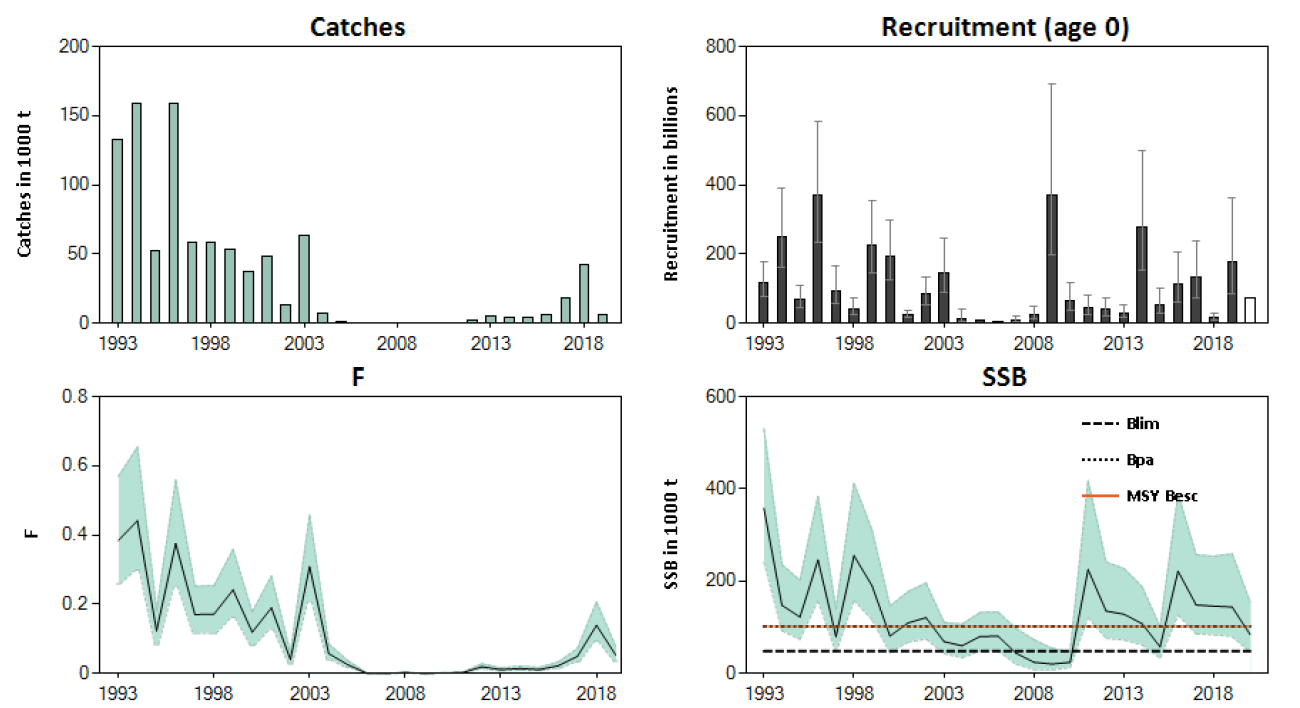 Figure 4: Sandeel in Sandeel area 4. Historical development of the stock from the summary of the stock assessment, with 90% confidence intervals. Assumed recruitment values are not shaded. Fishing mortality (F) is presented for ages 1 – 2.

Measures to protect sandeels as prey for predators

Protecting seabirds and other predators reliant on sandeels has been the purpose of several management measures in Scotland since 1990 (Wright, 1996). This follows concern about fishery effects on sandeels and their availability to many piscivorous fish, seabirds and mammals (Monaghan, 1992; Engelhard et al., 2013; Wilson & Hammond, 2019; Hill et al., 2020). Black-legged kittiwake and other seabirds that feed near the sea surface appear particularly sensitive to the availability of sandeels (Furness & Tasker, 2000) and the breeding success of this seabird often reflects the population level changes in sandeel abundance (Poloczanska et al., 2004; Eerkes-Medrano et al., 2017; Olin et al., 2020).

Due to the high level of site fidelity once settled (Wright et al., 2019), sandeels may be vulnerable to local depletion and evidence of spatial differences in mortality at the scale of grounds > 28 km apart has been found (Jensen et al., 2011). While there may be little effect at a stock level, local depletions even within a year could affect sandeel availability to local predators. As a result, ICES advised that localised depletion should be avoided in those areas where predators congregate. This is a particular concern because sandeel grounds in Scottish waters tend to be small (Wright, 1996; Jensen et al., 2011), sandeels are slow growing (Wright et al., 1997; Boulcott et al. 2007; Rindorf et al., 2016) and there are large predator populations that feed on them.

The fishery that developed off the Scottish east coast in the early 1990s was associated with declines in the breeding success of some seabirds at adjacent colonies (Rindorf et al., 2000). The north east UK sandeel closure (see Figure 3) was established in 2000, following a UK call to the EU for a moratorium on fishing and advice from ICES that sandeels supported a number of potentially sensitive seabird colonies in the area and were part of a reproductively isolated group separate from the other fished aggregations in the North Sea (Wright et al., 1998; Wright et al., 2019). The EU (EU Regulation 227/2013) closed the fishery as a precaution whilst allowing a small commercial catch (<5,000 tonnes) to monitor changes in sandeel abundance. The closure has been maintained following subsequent reviews of the effectiveness of the closure (STECF, 2007), which include a decrease in mortality of age 1 and older sandeels and improved kittiwake breeding success following the closure (Greenstreet et al., 2006; Daunt et al., 2008). While this closed area does not occupy the full extent of the SA4 stock area it does encompass much of foraging range of breeding seabirds (Wakefield et al., 2017). However, ICES takes no account of area closures when advising on TACs, so current advice on SA4 catches does not consider that around half of the sandeel habitat in the stock region is closed to fishing.

Due to the ecosystem importance of sandeels they were made a Scottish priority marine feature and, given their limited movement, one that was considered a search feature priority in the nature conservation Marine Protected Areas (NC MPA). Three MPAs were designated in 2014, where sandeels were the key search feature; Mousa to Boddam NC MPA, North-west Orkney NC MPA and Turbot Bank NC MPA (see Figure 3). Sandeel grounds nearer to the Scottish east coast were not considered given the fishery closure already in place. A fourth aggregation corresponding to a previously fished area off Lewis within the North-east Lewis pMPA, is also under consideration. The small Mousa to Boddam NC MPA was chosen because this area was shown to be a site favoured by sandeels recruiting to Shetland (Wright, 1996). All other MPAs were chosen because of their importance as source areas for larval production (Proctor et al., 1998; Lynam et al. 2013), as has been confirmed using chemical signatures in the otoliths to track movements (Gibb et al., 2017; Wright et al., 2018; 2019; Figure 5). The MPA designation requires that any proposed activity must consider the potential impact on the conservation status of sandeels in the area. Currently, only the Turbot bank NC MPA covers an area open to sandeel fishing and no management measures have yet been put in place. 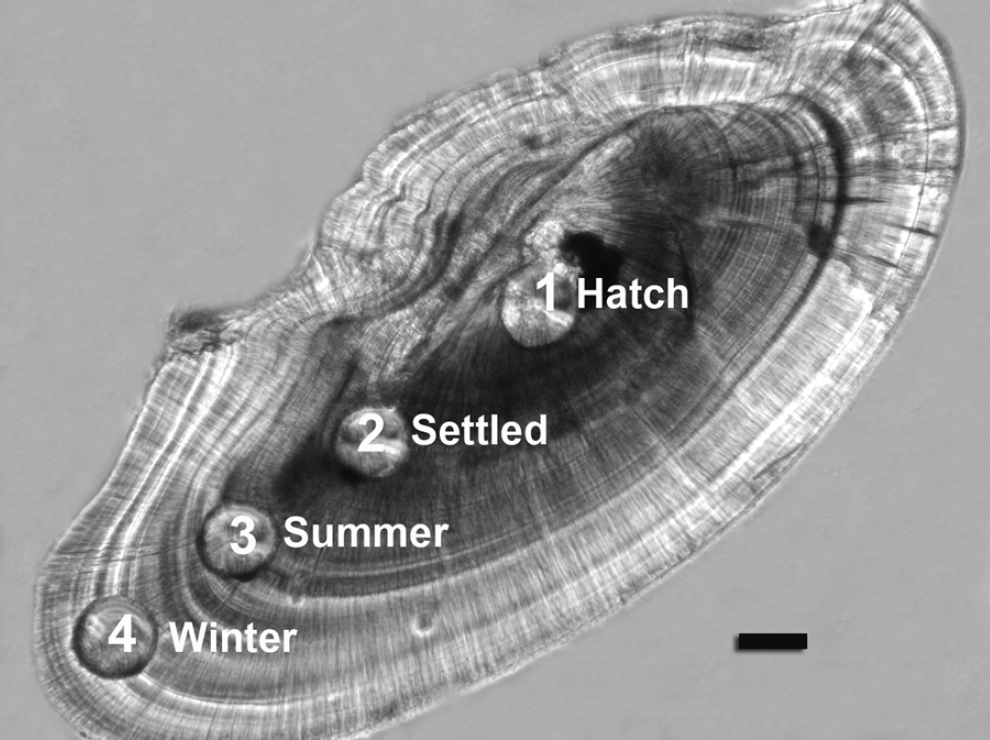 Figure 5: Section of a sandeel otolith showing the pits ablated by laser for elemental analysis corresponding to different life-phases of the fish. Scale bar 50 μm. Otoliths were sampled from sandeels at grounds from around Scotland and the North Sea. The elements barium, manganese, strontium, magnesium, rubidium and zinc were estimated by an inductively coupled plasma mass spectrometer. Comparison of the element concentrations at pit 1 - hatch indicated some mixing prior to settlement. There was little change in element concentrations in pits 2 - 4 indicating that sandeels remained in the area they settled (Gibb et al., 2017; Wright et al., 2018).

Climate change and the future of sandeels

As settled sandeels remain on a sand bank and overwinter for many months without feeding they are very sensitive to their local environmental conditions (Heath et al., 2012). Due to this behaviour, sandeels are unusual in that warm autumns cause them to delay spawning as they need stored energy to survive buried in the sand as well as to develop gonads (Wright et al., 2017a,b). Warming does speed up egg development but not sufficiently to counteract the negative effect on gonad development (Régnier et al., 2018). Temperature is also important to copepod development and spawning, when not limited by available phytoplankton (Cook et al., 2007). Sandeel larvae usually hatch close to the onset of production of their copepod prey but poor synchrony between the timing of sandeel hatching and that of their copepod prey leads to low recruitment (Wright & Bailey, 1996; Régnier et al., 2017). In some cases, these adverse conditions for recruitment can be reflected by warm winter sea temperature (Arnott & Ruxton, 2002) but such a simple measure is not a reliable proxy of the different processes affecting the synchrony between sandeel larvae and their prey (Eerkes-Medrano et al., 2017). However, using the latest understanding of the different thermal relationships affecting both sandeel and copepod development (Figure 6a) it has been possible to derive a predictive measure of the temporal overlap between these organisms that explains much of the inter-annual variation in sandeel recruitment (Figure 6b; Régnier et al., 2019). Moreover, based on future climate predictions and this model, it is likely that the frequency of years with a poor overlap will increase and so sandeels are likely to decline in Scottish waters. Further information on sandeels and climate change can be found in the fish section of the climate change assessment and the Marine Climate Change Impacts Partnership (MCCIP) sandeels and their availability as seabird prey report.