Pelagic gastropods (sea snails) are molluscs. This group comprises gastropods which spend their entire life cycle as planktonic organisms (mainly pteropods) as well as the pelagic larvae of otherwise benthic gastropod species. These organisms play an important part in the pelagic food web and in biogeochemical cycles of the ocean. 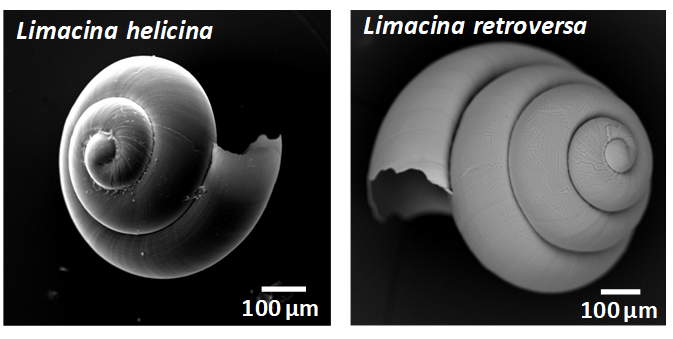 The SCObs site at Stonehaven remained supersaturated with respect to aragonite and calcite (Ωarg >1) throughout the duration of the study, implying that aragonite concentration is not a limiting factor for the formation of the shells of these gastropods. However, the majority of taxa were found to have evidence of shell dissolution (Figure 2), with the highest proportion of dissolution occurring as the Ωarg decreased towards the winter months. Other field studies, such Peck et al. (2018) in the Greenland Sea also reported shell dissolution under supersaturated conditions.

The temporal variability of shell dissolution and carbonate chemistry highlights the requirement for a longer time series of data to further the understanding of the response of calcifying plankton to ocean acidification.