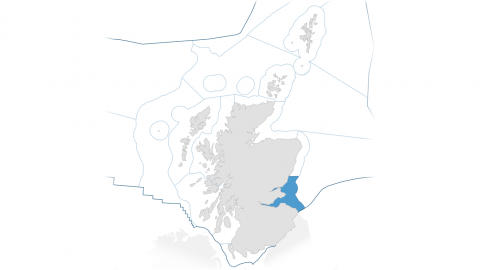 Pressures on the marine environment in the Forth and Tay inshore area relate mostly to removal of target and non-target species. This is due to activities such as fishing using a variety of methods such as creeling and potting, scallop dredging, and bottom trawling. These activities may also likely lead to physical change to the seabed via sub-surface, surface abrasion and penetration. Fishing activities include invertebrate and vertebrate species and also stock assessments do not necessarily suggest fishing beyond biological limits. Surface abrasion is also likely to occur through weather-related dragging of traps and ropes from creeling and potting activity which is widespread but at low intensity in the region. Creeling and potting may also affect non-target species through ghost fishing of lost gear and risk of entanglement in ropes. Other pressures resulting from these activities may include siltation and reduction of prey.

Introduction or spread of non-indigenous species and translocations is likely to be a potential pressure, although no clear evidence neither clear cause-effect data really exist to indicate this pressure as a strong matter of concern. There is suggestion this may be the case but without focussed monitoring no further assertions can be made. Furthermore, other emerging pressures to consider are noise and litter. There is increasing evidence that a range of activities in the marine environment, such as fishing (any gear), tourism, shipping, sonar, port activities, are now leading to the prevalence of these pressures and certainly this is likely the case in this region, since these activities are prevalent here. However, clear and conclusive data allowing cause-effect relationships are missing. It is considered that main pressures in this region relate to fishing activities, as described above. It is not suggested that these activities are not managed and indeed good data exist that could be used to compile information on changes in activities over time and link to possible direct pressures.