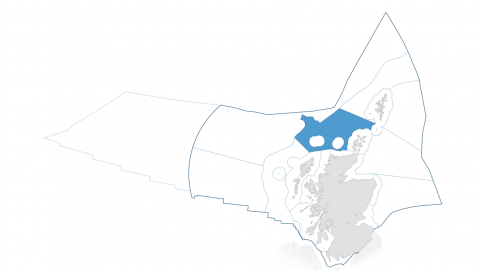 Pressures associated with commercial fishing for this region are similar to those acting on the Hebrides Shelf region. However, additional pressures on the North Scotland Shelf are identified to arise from offshore oil and gas installations, and associated shipping, giving rise to the greater prominence of the pressures of underwater noise (also associated with military activity), physical change, and collision risks. Noise generated by seismic surveys is considered infrequent. Large oceangoing cruise ships will produce considerable amounts of low-frequency noise but are also relatively infrequent. Impacts on other marine receptors (fish, invertebrates) largely unknown due to lack of scientific data. Non-synthetic compound contamination from offshore oil and gas has not exerted significant pressure to date.

1 Removal of target species (lethal), and;