Forth and Tay SMR 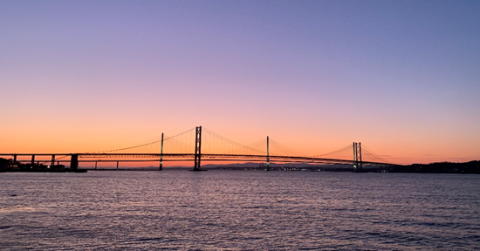 The bridges over the Forth
The Forth Road Bridge and the new Queensferry Crossing, Image Credit: Holly Passmore 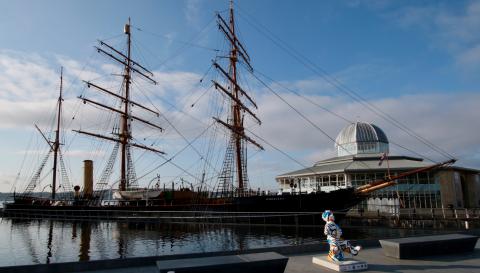 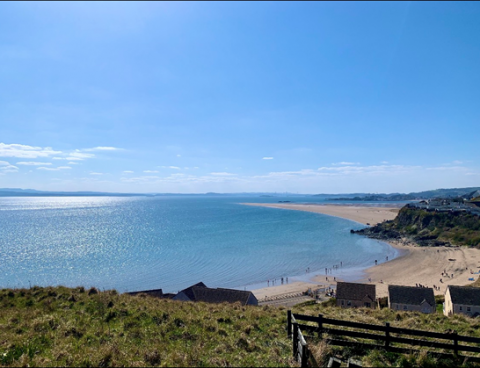 The firth of Forth from Fife's Kinghorn bay. Image Credit Adam Cox
Next

Figure 1: Forth and Tay Scottish Marine Region. The thicker white line delineates the extent of the Forth and Tay SMR. For a map of all SMRs and OMRs, see Figure 5 here.

The Forth and Tay SMR is the most southerly Scottish Marine Region on the east coast of Scotland, extending from the border as far north as Montrose (Figure 1). This region is dominated by the presence of two of Scotland’s major estuaries: the Firth of Tay and the Firth of Forth. The river inputs in this region result in a large volume of freshwater which have considerable influence on the salinity and turbidity. Average salinity is relatively low, particularly compared to the adjacent Long Forties OMR

Away from these estuaries, the residual circulation consists of the general southward coastal flow along the east coast. Tidal currents are predominantly in the along-shore direction. This region is relatively exposed to wave climate from the North Sea, which can lead to a large swell due to the relatively long fetch.

The Forth and Tay SMR consists of a range of distinctive marine features such as the sandbanks and mudflats of the Tay and Forth estuaries, respectively, islands and partly submerged rocks including Inch Cape, the Isle of May, Inchcolm, Inchkeith, and the Bass Rock, and distinctive headlands such as Fife Ness and Fast Castle Head.

The region has a varied geology, for the most part formed of Devonian and Carboniferous rocks (410-290 million years old).

A variety of marine benthic habitats are found in the region, on substrates ranging from rocks to large areas of sand and mud. Most of the rocky habitats are moderately exposed to wave action.

The enclosed inlets and estuaries, such as the Montrose Basin, the Firths of Tay and Forth and the Eden Estuary, are relatively more sheltered and soft sediments predominate comprising extensive deposits of glacial sand.

The Productive Assessment for the Forth and Tay SMR has been undertaken on a sectoral basis, with a focus on 2014 - 2018. Historically, the Forth and Tay SMR has been a major contributor to the Scottish economy. It includes the freight ports of Dundee and Forth (Rosyth, Braefoot Bay, Burntisland, Grangemouth, Hound Point, Kirkcaldy, Leith and Methil). Anstruther and Eyemouth harbours continue to be important ports for shell fisheries. Furthermore, the Forth hosts one of the three major centres of ship building and refits in Scotland, the other two being in the Clyde SMR. There are also a number of important heritage sites including the Forth Rail Bridge World Heritage Site. There has been significant recreation and tourism in and around the Forth and Tay SMR for many years, with sailing from harbours such as Anstruther and Elie and Earlsferry.

In addition, the Bass Rock continues to provide opportunities for bird watchers with the largest colony of northern gannets in the world. For a number of Sectors, including aquaculture, oil and gas and carbon capture and storage there was no activity within the Forth and Tay SMR during the period 2014 – 2018. However, for many sectors, there were changes over the period 2014 – 2018 (Figure 2).