This overview focusses on the monetary value of, and employment provided by, the Scottish marine economy. However attention is also given to the social benefits through an insight into people’s perceptions of the benefits of the coasts and seas collected in the Marine Social Attitudes Survey (Scottish Government, 2020). Other non-economic benefits are explored further in the SMA2020 Ecosystem Services section.

Scotland’s Marine Economic Statistics (SMES) (Scottish Government, 2019) relate to direct contributions of the activities to Scotland’s economy and not to the wider supply chain. It provides estimates for the Gross Value Added (GVA) (GVA = Value of goods and services produced minus the cost of raw materials and other inputs used to produce them) and employment contributions of ten industries (excluding oil and gas extraction) as defined in Scotland’s Annual Business Survey. Table 1 and Figure 1 show the individual industry contributions to the marine economy, including oil and gas extraction for completeness.

In 2017, the latest year for which figures are available at time of publication, the Scottish marine economy, including oil and gas extraction, generated £14.7 billion GVA: accounting for 11% of the overall Scottish GVA and provided employment for a headcount of 84,500 people, contributing 3 % of total Scottish employment. The 2017 GVA and employment numbers are not comparable to those published in Scotland’s Marine Atlas (Baxter et al., 2011) as: they use 2017 prices, include marine tourism, use different source data for fishing and aquaculture and a different methodology for oil and gas services. 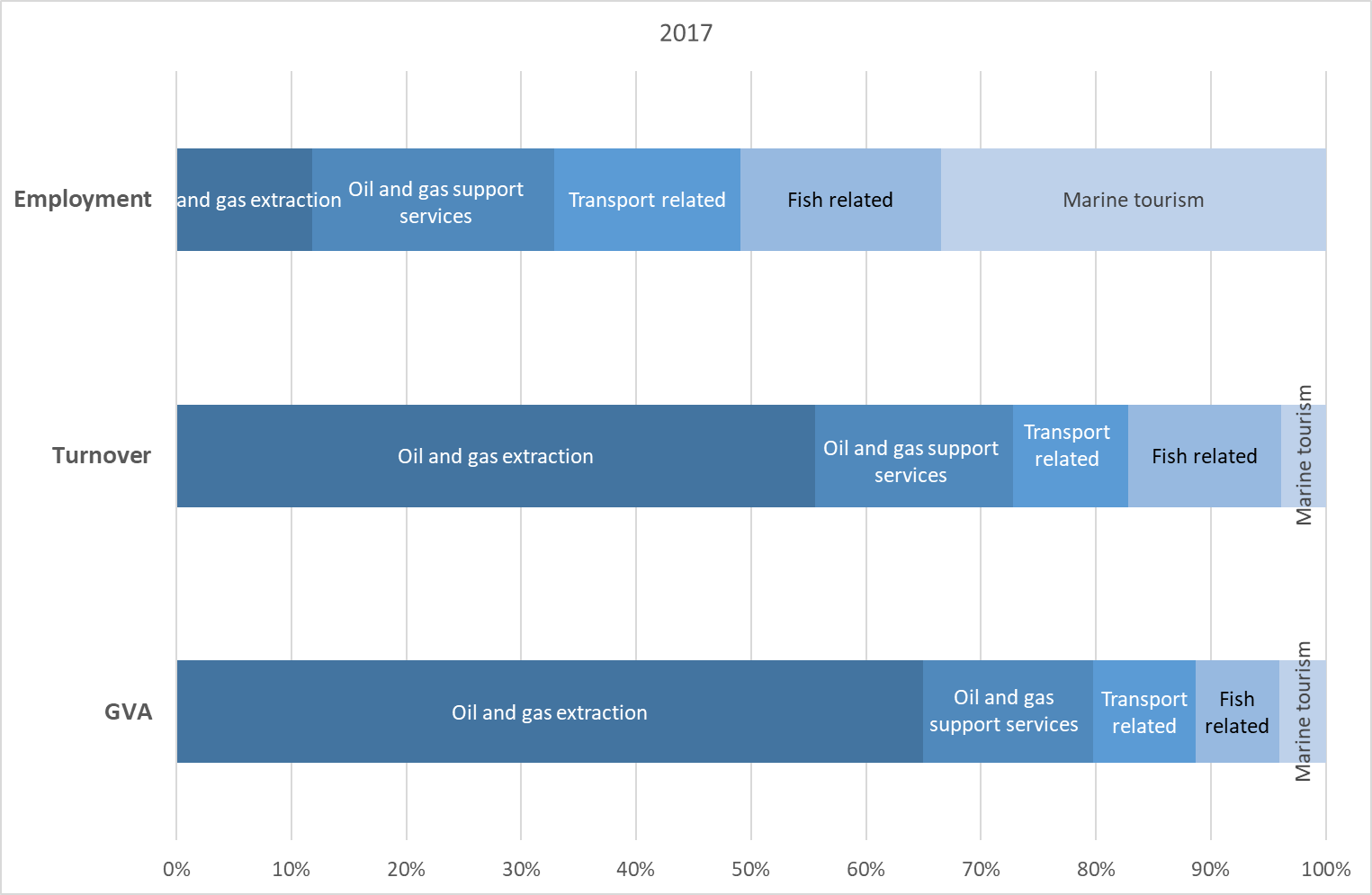 National marine economy trends (including oil and gas, and adjusted to 2017 prices)​

Between 2008 and 2017, the marine economy GVA (Table 2 and Figure 2) fell by 46% and employment increased by 13%. Without oil and gas production, GVA fell by 4% while employment increased by 10%. A longer term trend has been included here as these figures are not directly comparable to those published in Scotland’s Marine Atlas (Baxter et al., 2011) for the reasons given above. 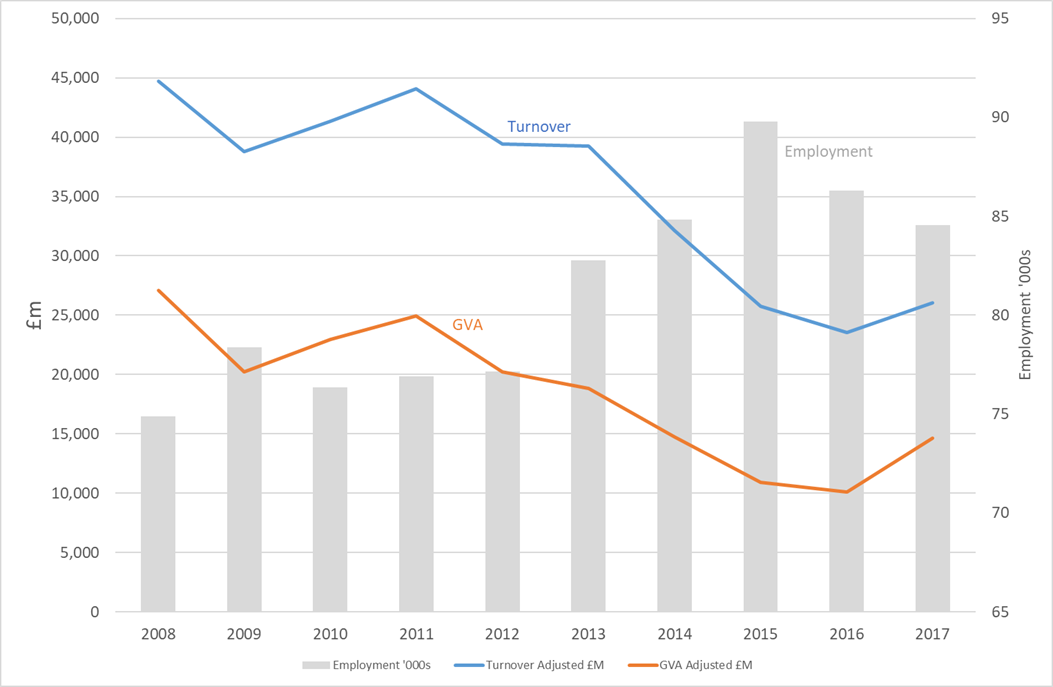 Figure 2: GVA and turnover and employment from marine economic industries, including oil and gas extraction, 2008 to 2017 (all 2017 prices).

Turnover is the total sales made by a business. It is sometimes referred to as 'gross revenue' or 'income'.

The main source for the marine economy GVA figures is the Scottish Annual Business Statistics (called the Annual Business Inquiry prior to 2009). This is a sample survey, so more detailed breakdowns of the data will result in reduced statistical quality. In particular, when the data are provided by local authority area, small changes can have a have a very marked effect on figures from one year to the next. Also, for similar reasons it is not possible to analyse these data and provide them for the new marine planning Scottish Marine Regions with any confidence. The GVA for oil and gas extraction is only available at a Scotland level so has been excluded from the regional marine economy figures. 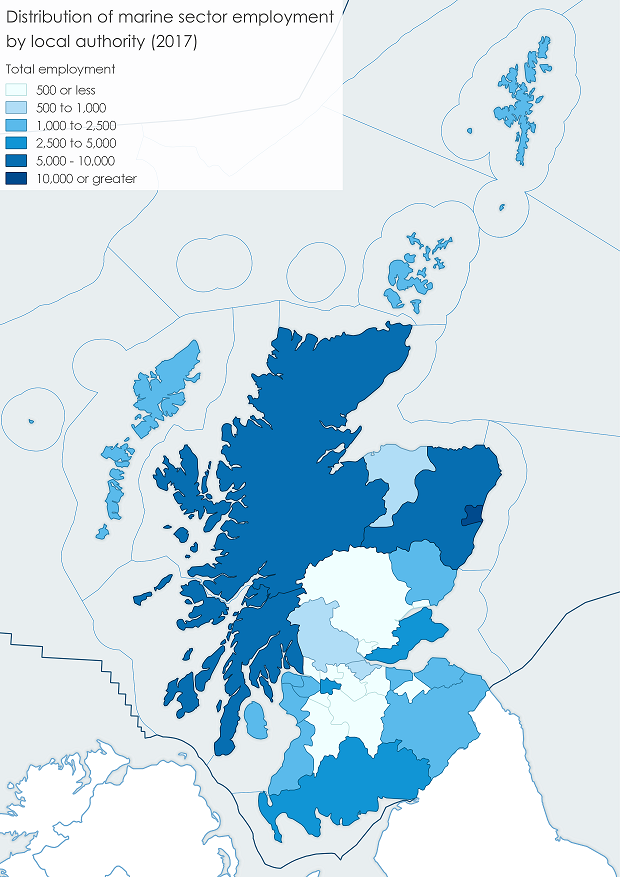 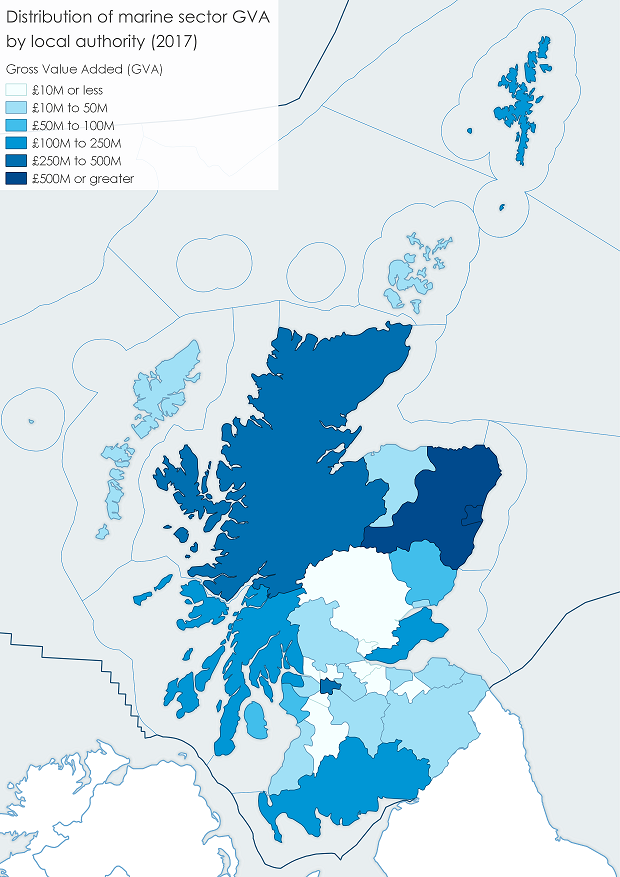 Unfortunately, due to a change in methodology for surveys after 2016, it is not possible to provide comparable information on the change in the marine economy’s GVA (excluding oil and gas extraction) by local authority over time. For some areas of the marine economy a regional trend is possible and these have been included in the assessment entries for those topics, see Leisure and Recreation, Aquaculture and Fishing.

Some local authority values are suppressed, shown as “*” due to a small number of responses (Table 3). Suppression is the name for removing or hiding figures in order to prevent potentially sensitive information about individuals or businesses being revealed. The Scotland GVA includes suppressed values and values that could not be allocated to a local authority. The unallocated row in the column below includes aquaculture GVA, as this could not be provided at a local authority level, and the sum of all of the suppressed numbers.

A survey of Scottish residents in 2019 (Marine Social Attitudes Survey, Scottish Government, 2020) found that monetary, employment and social value of Scotland’s coast and seas are clearly recognised by them. They highlighted the social value of ports and harbours, coastal tourism (including cruises) and recreation, the economic value and benefits provided by marine industries through employment and spending in local economies. However, only a small proportion had a direct economic relationship with the marine environment, with 12% of respondents visiting the coast in the past year for work or business reasons.

There were mixed views about the trade-off between economic and social benefits from the marine environment and environmental protection. Some participants in group discussions felt that employment and economic contributions such as GVA ought to be higher (especially for well-known industries such as aquaculture, commercial sea fishing and the oil and gas industry) to justify the impact on the marine environment. Others felt, however, that current levels of economic and social benefits to society were sufficient. Overall, discussions with groups comprising members of the public suggested a strong support for sustainable use and management of marine environment. They interpreted this to mean maximising the benefit of the marine environment to Scottish residents whilst protecting resources for future generations. The results from this survey will contribute to the evidence base for Marine Scotland when developing, appraising and evaluating relevant policies.