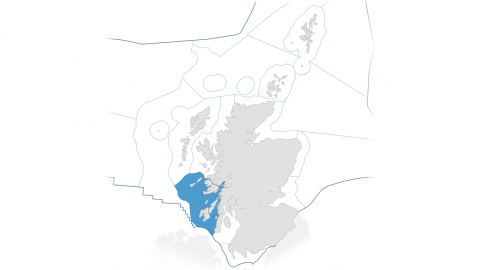 Argyll is a diverse region, though without direct input from large industrial conurbations, ranging from ocean-influenced shelf seas to brackish sea lochs. Collision risk in Argyll is not listed in the top five pressure, but there is lots of uncertainty in terms of how often this occurs: mainly driven by extensive yachting activity in this region and commercial shipping routing through the Irish sea to the Minch. Basking sharks are regularly observed in this area. Numerous seal haul out sites exist; small cetaceans (porpoises/dolphins) are regularly observed. The region is also important for minke whales.

In identifying the top five pressures for the whole Argyll region the following activities were considered to be important.

1 Removal of target species (lethal): all species involved in recreational angling have been assumed to be ‘target’ species rather than ‘non-target’ bycatch. This activity is likely to be (mainly, though not exclusively) concentrated in inshore waters. Scallop dredging; bottom otter trawling and pair trawls; creeling and potting; dive fisheries; line fishing (hand and mechanised longlining); recreational fishing; scallop dredging.

4 Synthetic compound contamination: this presumes that wastes associated with tourism end up in coastal waters. It has been assumed here that the bulk of such wastes originate from yachts, which could conceivably result in local contamination in marinas and other places where many vessels lay at anchor. Shipping and finfish culture also contribute.